I am blown away that this thing moves under its own power! I think I saw it in its parking spot pre engine.
OP

I mechanics wired the drive shaft to the exhaust and flat towed it behind my 68 F250 all the way up 66 from El Cajon California. I would sleep in this thing with its rod knock idling all night since it was pretty much winter and I would drive the truck haulin everything home to Illinois.
..... I don't think the insides ever been this clean 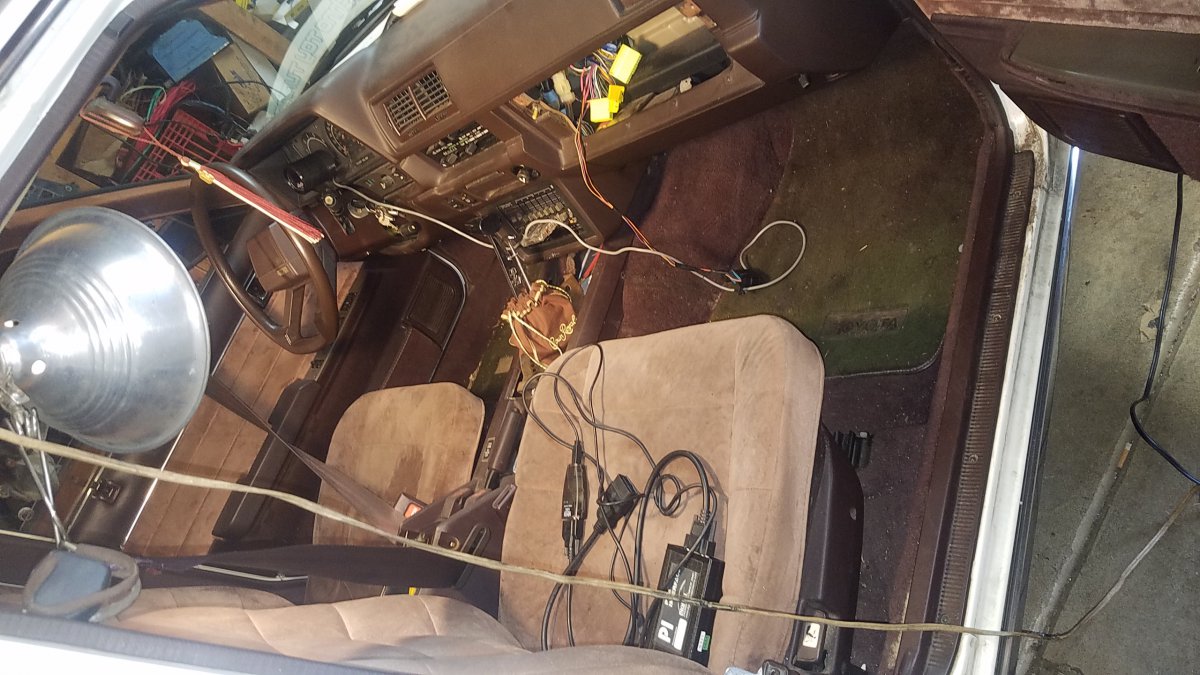 I got to finish unloading some stuff and throwing possibly needed tools into the back so I can go for a ride.

dude, i sat in the back seat!

seems smaller than i remember

when i come back home i have to toss a bunch of stuff....i have a buncha holley stuff to ditch lol, an old radiaton king microwave (with the huge magnetron) etc
OP 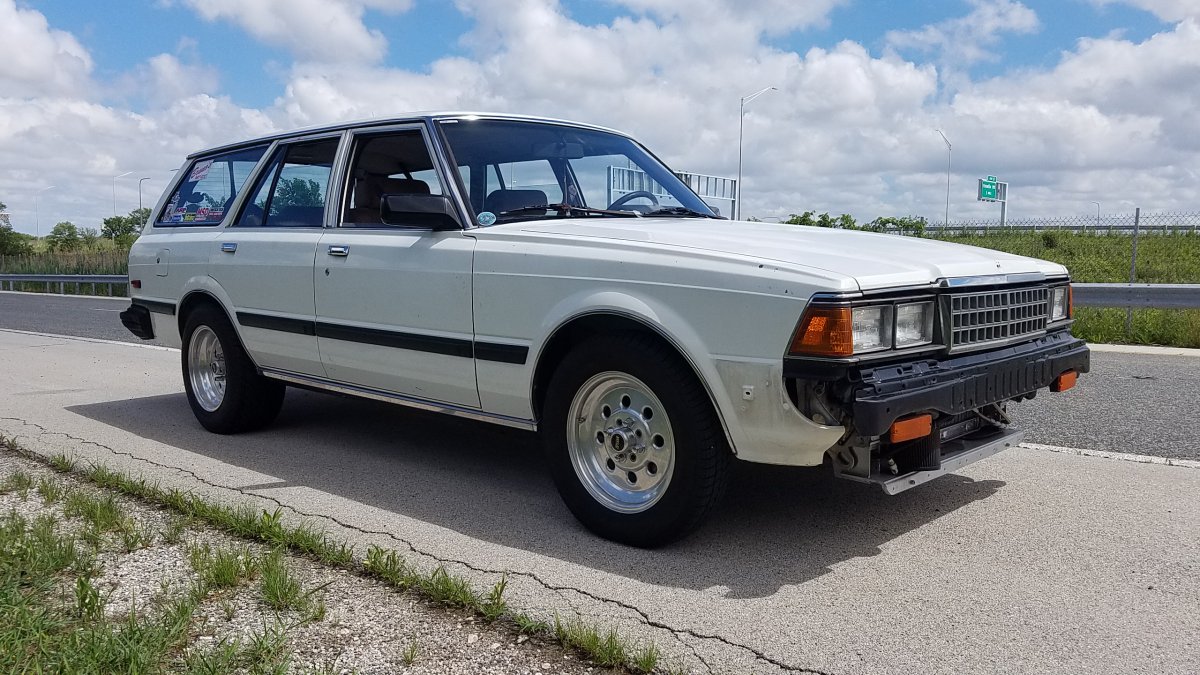 I'm back home without major issues and I'm running through a Quick tune on the maf.

I'm still fussing around with the throttle valve cable but I have it pretty well-adjusted. I guess there is something to be said for electronically-controlled transmissions.

I am so going to break something
OP

I'm back home without major issues and I'm running through a Quick tune on the maf.

I'm still fussing around with the throttle valve cable but I have it pretty well-adjusted. I guess there is something to be said for electronically-controlled transmissions.

I am so going to break something
Click to expand...

Know so many of the feelings here. Good luck holding her together.
OP

Well she is really ripping now. I got to fix the exhaust hanger since only half of it is finished the exhaust kind of Twisted downward and is beginning to disconnect which makes it quite loud.

Full tank of 92 octane and I finished uploading all of the dhp 1.5 settings.... along with a 2004+ timing table with all of the upper cells bumped up even further.

I Jacked the exhaust back to the position its supposed to be in.
I took some measurements and going to make an upper hanger for the OEM crossmember mount that should fix the exhaust issue....i already did the pipe hanger.... don't mind the tack weld it's sort of not done but let's drive it first. 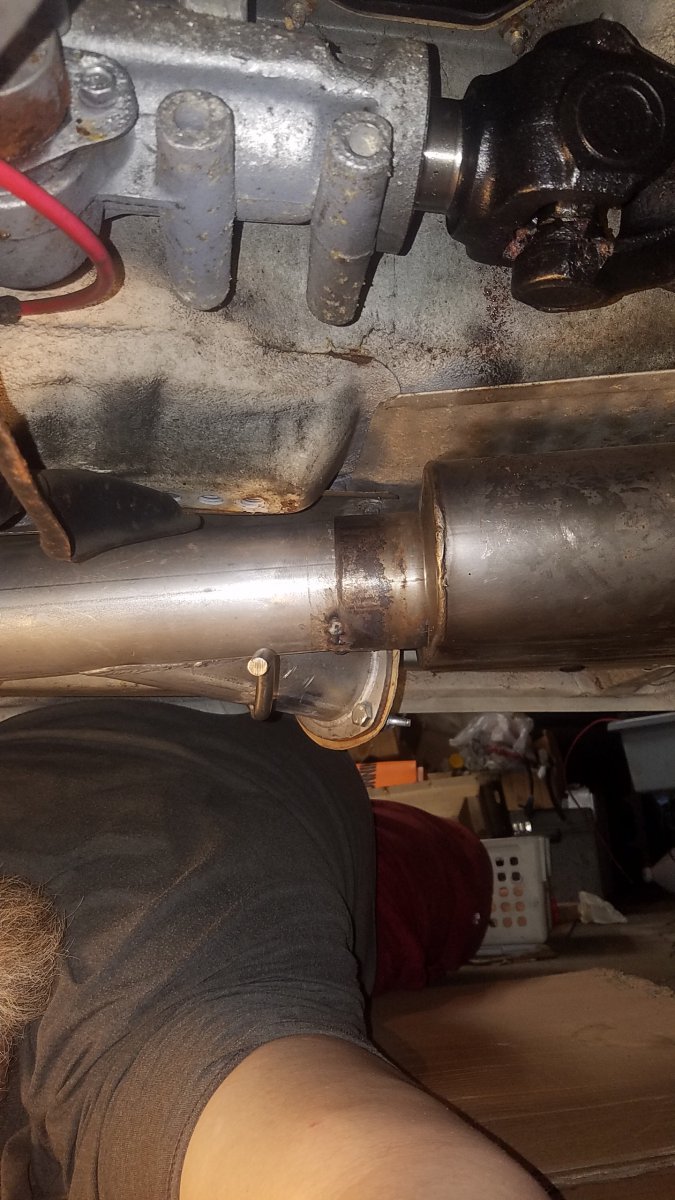 Ran the trans fluid temp wire and the Vss down to the transmission. Still have to terminate it at the vintage 89 vss.... which if I recall is 4000 pulse per mile which is nowhere near as many as modern computers. So I'll need to reflash the PCM and kind of trial and error that value with that 410 rear gear.
But at least at that point I will have mile per hour through the aeroforce gauge. Haven't started on the TCC, that can wait.

have 90% of the coolant overflow plumbed in. Checked all fasteners...except the rearend yoke.

Anyone with cleaners that wanna show me i dont have to use brake cleaner to clean this thing?
I'll buy you dinner but not this week I'm kind of poor I had to buy a bunch of s*** fer this thing
OP

Well the washboard on 390 scared the hell out of me so I just took it slow and went to 53 to take it south and on the concrete she felt way better at 50 55 miles an hour so I'm pretty sure the wheels and everything are fine.

Hood held closed just fine up to 65 miles an hour with 3 zip ties holding it.

I gave it the beans a few times and it was quite enjoyable.
Especially winding it out under the 355/lake overpass.

I mean to bug double-D to grab his Fender roller cuz my driver side quarter panel is really loving the Mickey Thompsons. 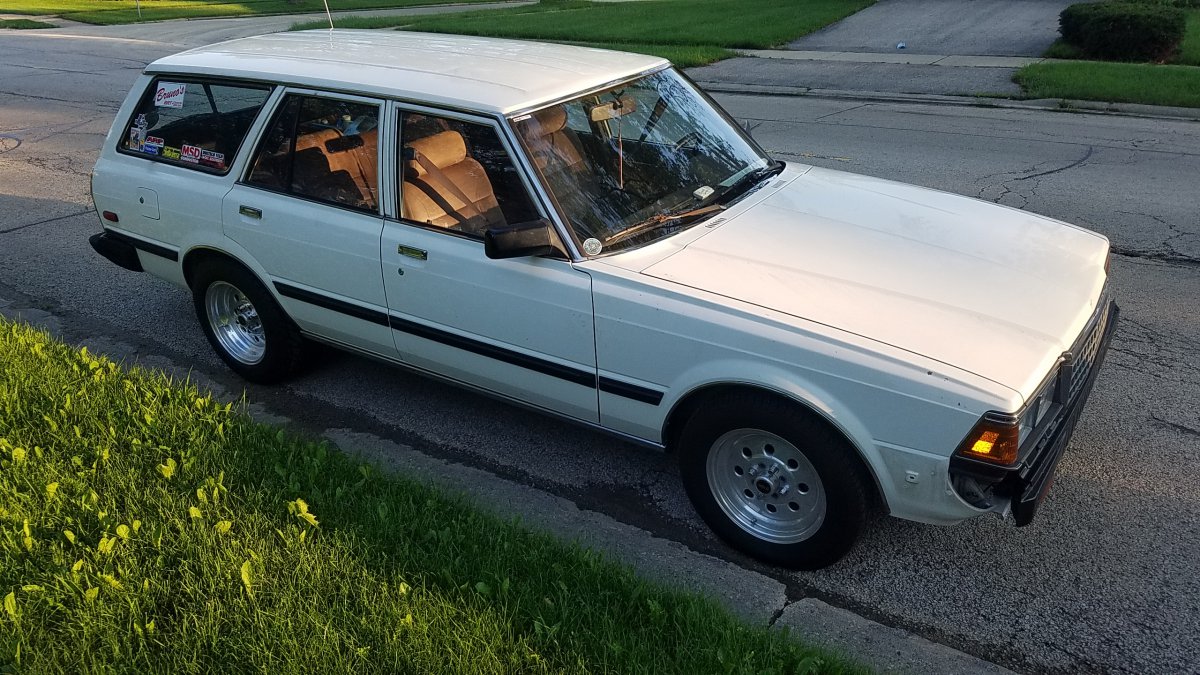 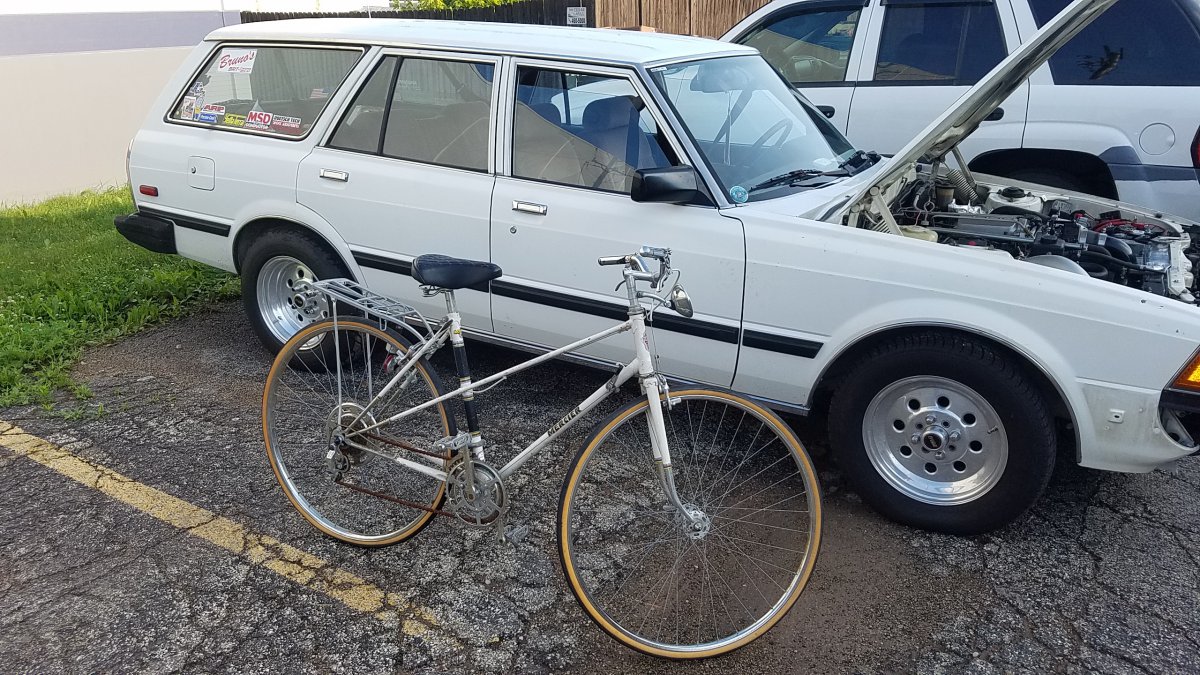 I'm leaving work early to make it up 2 TCG Thursday. Even if I have to push the f****** thing there

For now I can already tell that rear end is on borrowed time this thing is definitely a stoplight Warrior and way too much fun.
OP

Header paint is pretty burned off.... the silver stuff seems to have lasted better.

Sometimes I swear I hear a lifter tick but then I think it's probably an exhaust leak. 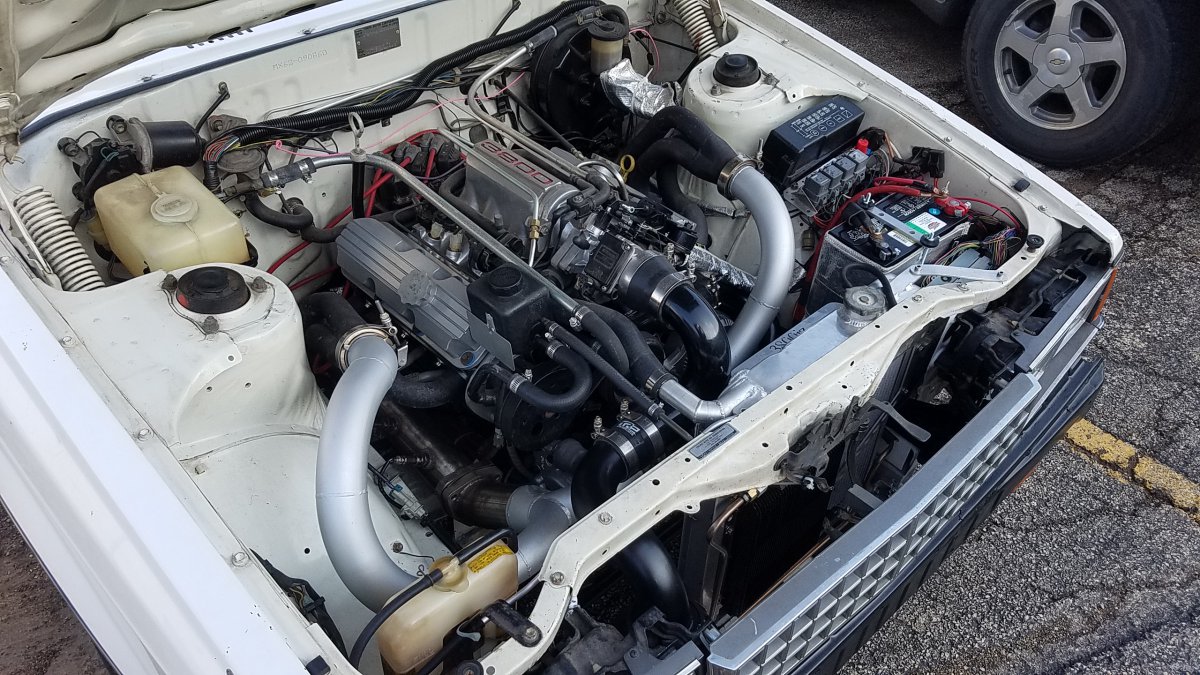 Turbocharged400sbc said:
Maybe after I do the 8.8 with 9 in end's and waterjet my own 4-link brackets
Click to expand...

This is the way

Nice thing about rear axles is they're not too difficult to modify if you have the tools needed and can make almost any axle fit underneath any car. You can even buy a lot of things like ladder bars, mounts, etc. all pre-made and just zap it all together once you find all of things you need.
This is basically the same platform as the Cresta from Mighty Car Mods right?
OP

im not sure on the cresta, i believe thats the generation after this. this thing is basically a large ae86 platform, 1000lbs heavier....and with smaller brakes than the 2 door coupe

NA the rearend should last well enough...its the 4.10 gearing that sucks

after looking at the log data from the drive out there i wrung her out from a dig. 2-3 felt kinda soft but holy hell, inside the car it sounds like the demons of hell are playing a church organ with precisely tuned sledgehammers

edelbrock victor truflow muffler and the dump under the passenger seat arent quiet inside the car....i dont think they are outside of it either

figured out i pluggeed in my headlights wrong... oh well i wanted to drive it

Okay couple observations this thing is fun as hell but I do need to finish the exhaust system and maybe put a remote cutout on the manual cutout.
I have a pretty good idea that finishing the exhaust system would really quiet down the interior.
Definitely need the torque converter clutch I did cruise 60 the way here oil pressure still holds up beautiful but I'm kind of leery of spinning it over 2800 RPM.
390 sucks.
Need to wire in wideband ASAP.

I bought a new tool to help the brake cleaner take off all the dirt. 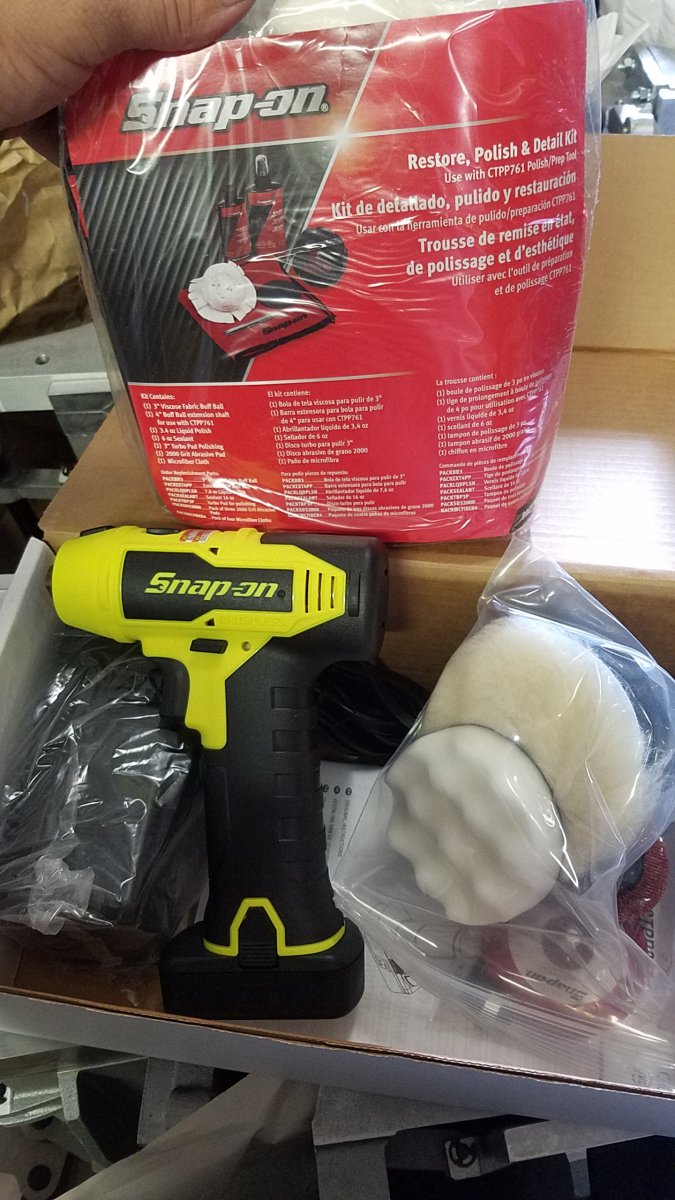 Took turtleman with for a spin.

That was the second time it would not complete a Full Throttle 1-2 shift....2-3 ft shifted fine, the trans functions but it's far from good.

Never got over 200 degrees the oil pressure gauge inside the car is wonky but appears to work most of the time?

I'm so going to end up breaking something
OP

I have ruled out a few circuits so far on the brain drain. Today I skipped TCG Thursdays to use the milling machine and trim down my KE72 panhard bar to fit the MX62.

I had to cut it an inch and a quarter shorter and rethread it with 3/4-16 left hand.

Now the real question is whether I can keep my Fender lips from slicing the Mickey Thompsons without having the fenders rolled... 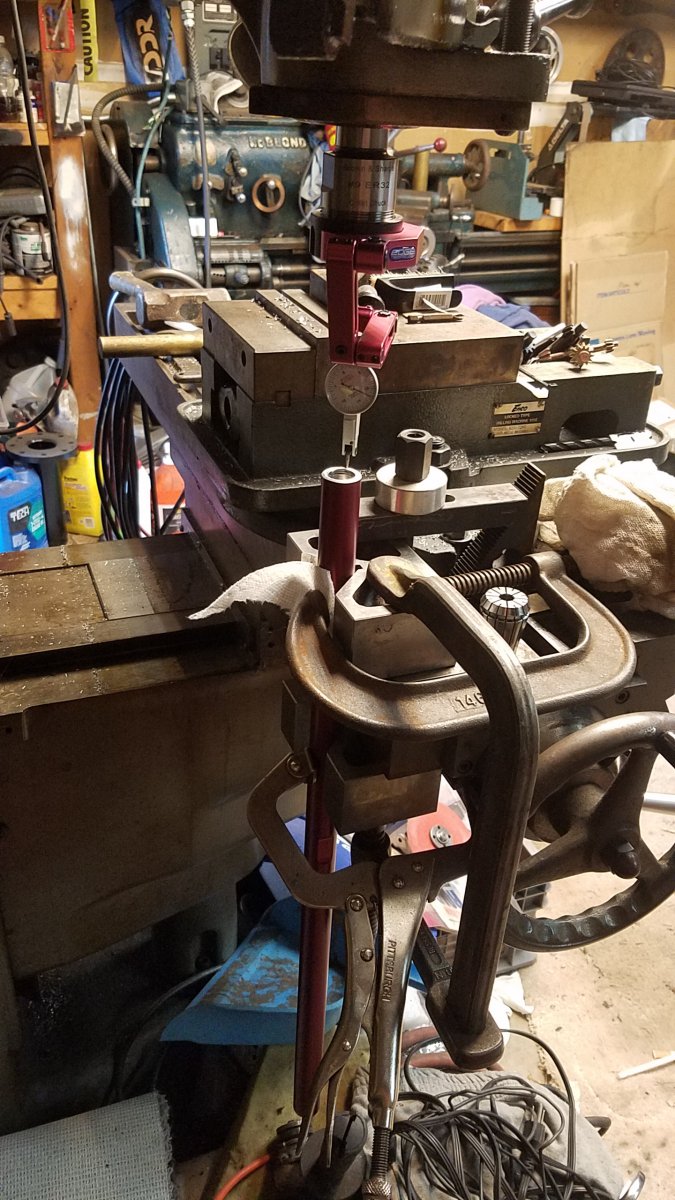