So, we've got about 25 acres of beans left to do, but the last few days have not been going very well.

The beans are wrapping on the left side of the reel for some reason. I was having to get off and unwrap it every round. 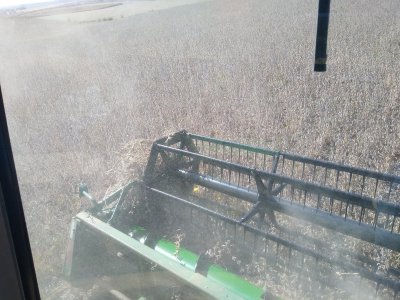 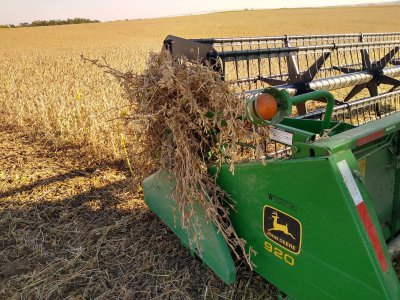 Also, we are having problems with green stem beans wrapping around the feeder house, which plugs up the dust diverter fans, and eventually screws up the elevator chain tension causing it to jump sprocket teeth. 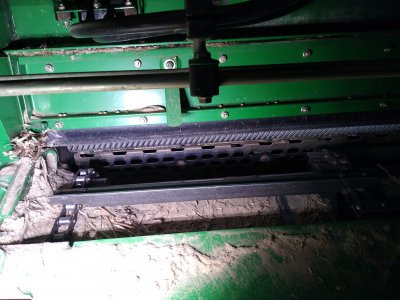 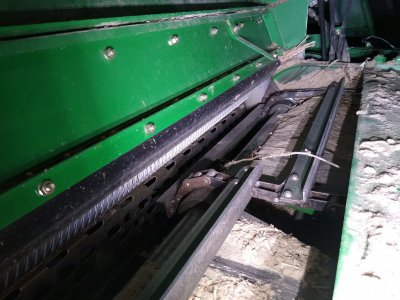 It's also a giant pain to clean it out.

This 20' head had a wider area where the auger flighting disappears. There's a 48" gap on this one, versus our 15' head that only has a 32" gap. You can buy flighting extensions from Deere, but they are over $200 for a short piece of flighting with some fasteners and it'll take over a week to get.

We've also been having problems with this head feeding well. There's a few more things I want to try with it. But I think there are a bunch of little problems. The majority of it being beans that have a green stem, when the plant should be dead by now.

Also, this combine and header was designed over 30 years ago. Beans back then were maybe 1.5 feet tall and made 30 bushels on a good year. We are now combining beans with it that are 3.5' tall and making over 70. So, my theory is that it was never designed for anything like this. 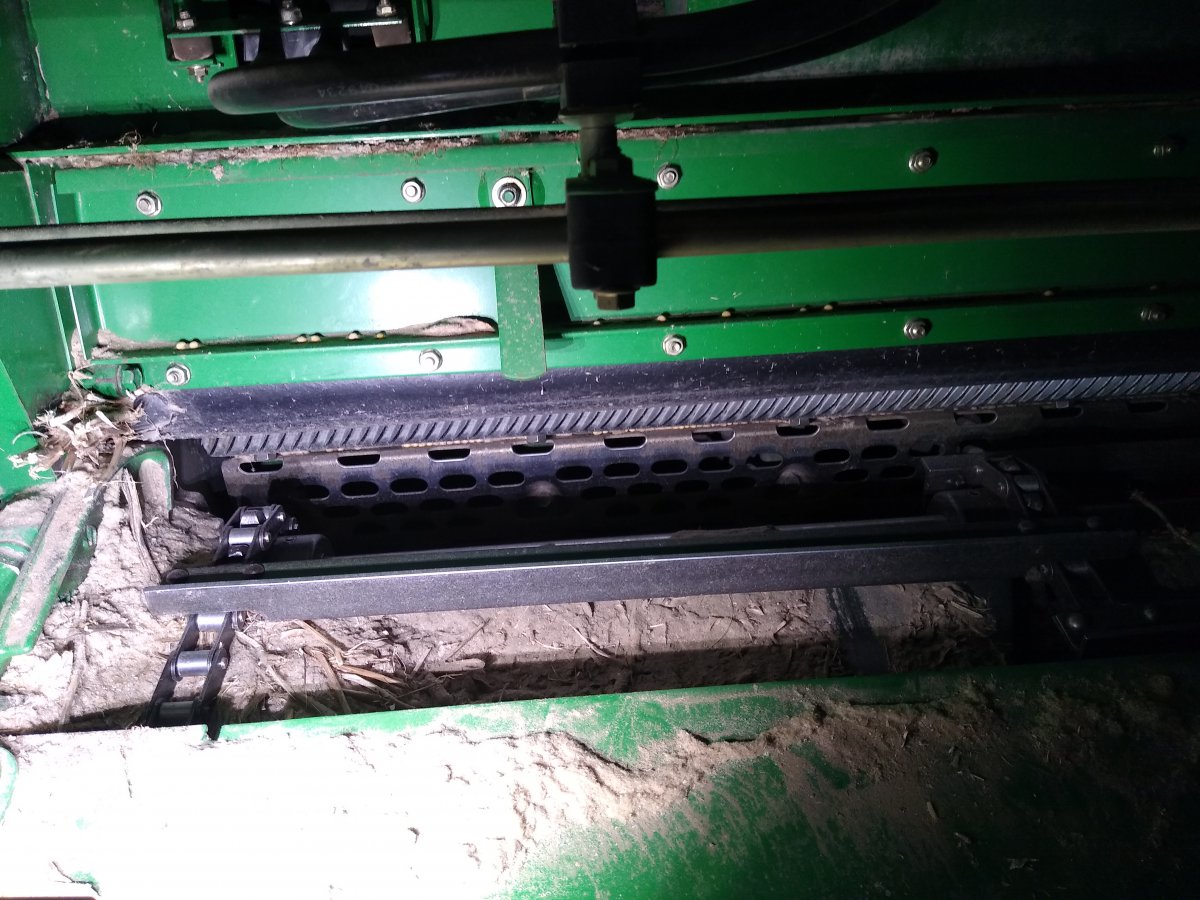 Yesterday dad finished up beans while I went to a little town called St Helena, which is almost on the south Dakota border. Close to Yankton if you guys have heard of that. I found a guy selling a corn head there. It has been sitting inside it's whole life, and hasn't been used in 15 years. It's pretty clean and only has about 1500 acres on it. So I bought it, brought but home, lubed it up and headed out with it today. 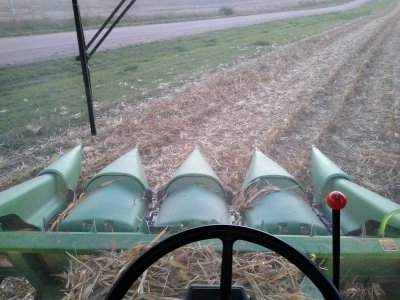 It's doing a great job of chewing the stalks down. Much better than our other head. It also has poly snoots, so that's nice. 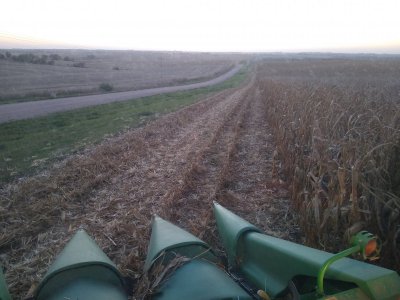 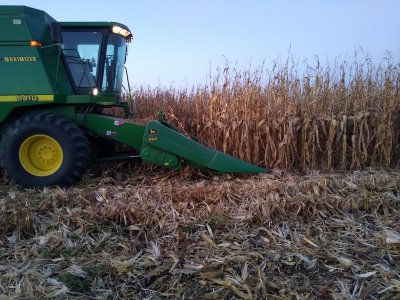 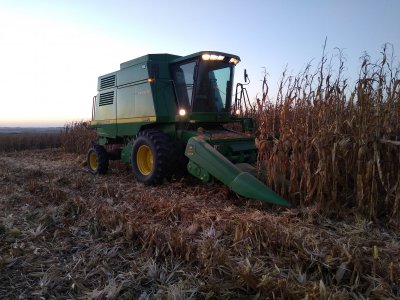 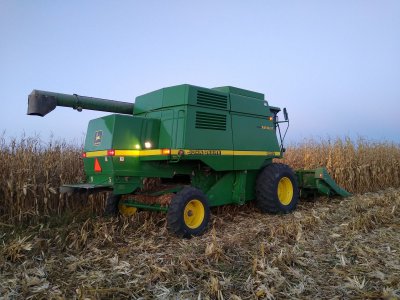 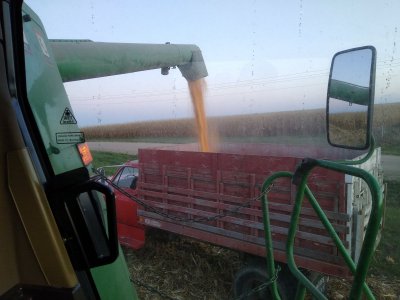 It was absolutely beautiful outside tonight. 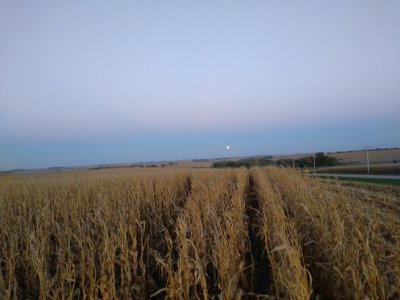 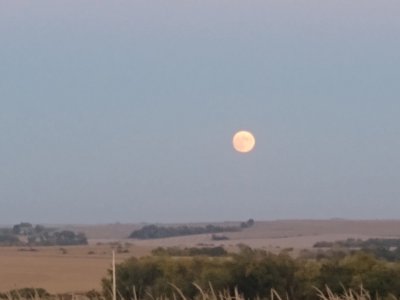 Those poly snoots are a good thing but if your anything like the guys I know better keep a couple spares around. In previous years I know the green tractor dealership has been cleaned right out of em and I can't imagine with the strike and stock issues were facing these days that that's gotten any better.

We've only ever ran one snoot into the ground over the years. We run them farther off the ground than most people because we don't have header height control on the corn head. I think that's where most of those guys have problems since they are so close to the ground.

After saying all that, I'll probably run one into the ground tomorrow.

Knock on wood lol. Sorry if I jinxed ya

FWIW, I wouldn't be too worried about the strike impacting parts availability.
Parts depots are staffed and factories are still running so if a critical component was crunched it should be able to be reproduced.
Supply chain issues, well, that's another story but poly snoots should be pretty readily available.
TS
TS

Another new machine this year. I bought this 8" x 61' auger online a couple months ago, sight unseen. When we went to pick it up, it turned out to be almost brand new, so I really lucked out there. 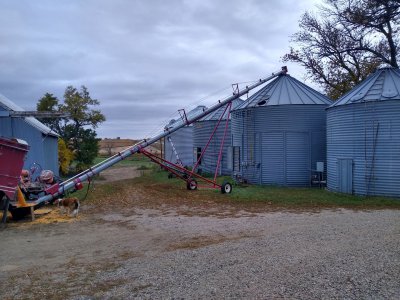 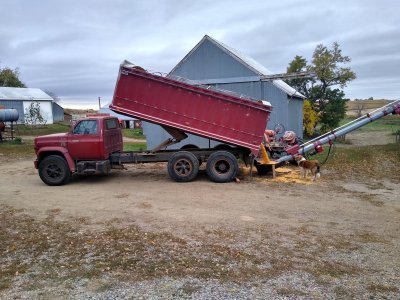 Before this, we have been using a 7" x 51' auger. Two huge advantages to this....first the 1" larger auger flows about 30% more grain, so unloading will be faster. Also, the far bin pictured that's more shiny than the rest is really hard to reach with a 51' auger. We have to wheel it up on planks so it reaches. This should make setting the auger way easier.

The bad part is, that's a lot of grain for the old wd-45 to be moving. In the bin it's currently dumping in, there is a grain spreader at the inlet, and it can't keep up with the auger. So when that overflows, it starts causing problems. Our plan for next year is to just take the spreader out.

GTPpower surely have heard of the 04 f350 that I've been tasked with taking care of for the last 7 years. Local big time farmer, truck is only on its 2nd engine but gets a new trans every 2 years, new t case every 3 years and new rear end every 4 years.

This is the shit I have to deal with. A fully loaded semi being dragged by that truck and I hear that 6.0 screaming through the video.

This must be the 1st 6.0 ever that goes through transmissions faster than engines.

GTPpower said:
This must be the 1st 6.0 ever that goes through transmissions faster than engines.
Click to expand...

Doing some combining today with my son by my side. 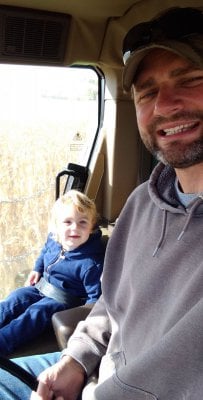 We've been shut down since last Saturday due to rain. Finally got back out today, but it's still pretty muddy. The combine has no problems, but the trucks and grain cart do.

We got most of the end rows pulled out, then the combine started driving weird. I thought the rear was just sliding on the mud, but after it wouldn't straighten out after 100' I got out to look. 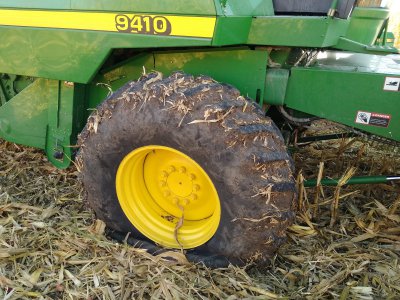 We tried to blow it back up with the truck. Spent maybe a 1/2 hour putting air in it, then I hopped in and drove fast to try and get it home, but I only made it to the other end of the field before it was flat again. There's a pretty big hole in the sidewall right next to the rim where it blew out.

These are the original tires, so the other side is probably not far behind this one. I am friends with the tire guy here, so he ordered a new pair of Firestones for us tonight after they were closed. He said they would be out to put them on Tuesday.

If it ain’t one thing it’s another...

Lucky you can get tires right now man.
TS
TS

Yeah, I got real lucky they are even available.

Least the drop center is on the outside on those wheels and your puttin good tires back on. That sucks tho man those definitely aren't cheap to replace
TS
TS

They are $1762 a piece installed. Neither one of us thought that was too bad. We can probably sell the old pair for $1000.
TS
TS

The 18.4's that blew out back in the spring, dad put them on auction time. They probably had 30% tread left, and one needed some doctoring where it blew out. They brought like $700. They basically paid for half the brand new pair.

GTPpower said:
They are $1762 a piece installed. Neither one of us thought that was too bad. We can probably sell the old pair for $1000.
Click to expand...

24.5x32 bias ply that seems about right. If they're 30.5s or radials then you got a smoking deal. Lot of times you can send em in for a section repair which is what I imagine will happen with them if someone buys them off ya. All depends on the injury really. If you can get that out of em more power to you tho
TS
TS

New tires got put on Tuesday. 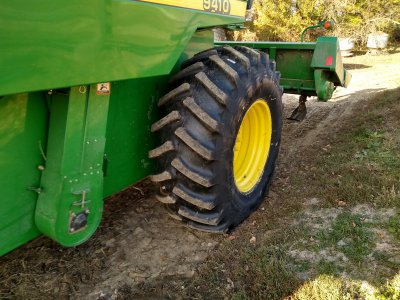 We did about 12 acres and the switch on the hydro stick that controls the header height broke. 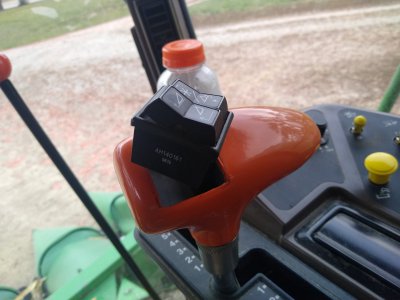 The new switch was about $120 through Deere. I'm honestly impressed that it lasted 23 years. It probably gets pressed 1000 times a day, and that's no exaggeration.

It was an easy fix though. Probably took less than 5 minutes to replace it.

So I went and opened up another field. I was out there for maybe 2 hours before a warning beeped at me. "Engine coolant temperature"

Looking at the gauge, the needed is buried in the red. So I shut the separator off and and idle it down. The temp drops back to normal in about 20 minutes. In the meantime I'm looking over the cooling system to see if I notice anything wrong. I didn't find anything, so I went back inside and started combining again. I made it maybe 1/4 mile before the needle was almost in the red again.

So I brought it home and parked it for the night. I was thinking it is either the tstat or temp sensor. We have a neighbor that is a very good John Deere mechanic, so I called him this morning to see what he thought. He also thought probably the tstat, but maybe the impeller fell off the water pump. The water pump can be removed in about 10 minutes, so it was worth the check.

But it looks fine. I replaced it 2 years ago, and it still looks like new. 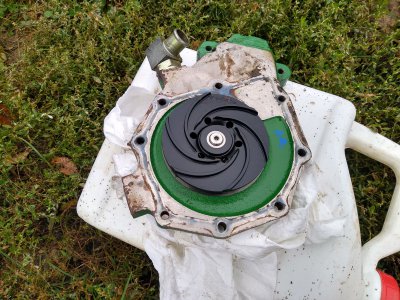 So the tstat is under the AC compressor. I had to remove that so I could get to the housing bolts. 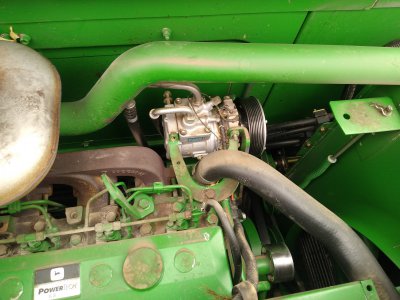 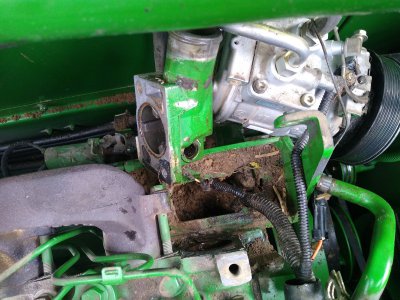 Finally got it out and look what I found. 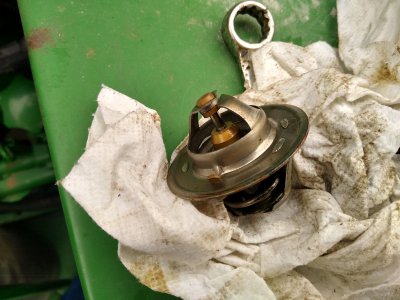 I can't say that Ive ever seen that.

So, then put it all back together and so far so good. Only got about 3 hours done, but hopefully this is the last major issue. 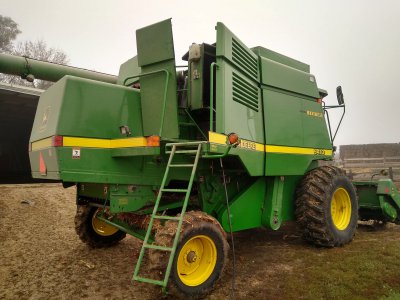 As far as the tires yes, Firestone is the best thing money can buy especially after a couple years of the rubber getting hard. On a combine they usually separate from being over weight or run low before they stubble out anyway. Least your moving again they're kinda wrapping things up around here but alot are done already
TS
TS

I was going to take a picture of the leak. It looks like it separated to me.

Alot of times it'll be an inner liner separation on the inside of the tire but others it'll kinda bubble up around the bead area. Deer antlers usually take a couple a year.

I've still got my pickup set up to be able to run a service call and still do a few tires here and there but I haven't ran a service call in a couple months. Thankful for a job with a nice heated shop keeping me busy and saving what's left of my back after throwing those things around half my life lol

From a perspective of little experience, combines have to be the most annoying machine on the farm. Sits for 10.5 months/year, and then when you need it you fucking need it. So it’s a combination of “we have a limited time to get this job done” and “let’s work the bugs out of this important machine at the same time”.