Hoover Dam is losing a lot of its water

TCG scientists, tell me how this is fine.

We're Inching Towards Actual Violence Over Access to Water

The Hoover Dam is losing its reason for being.

For more than eight decades, the iconic Hoover Dam has relied on water from Nevada's Lake Mead to cover up its backside. But now, at age 85, it finds itself uncomfortably exposed. Much of the water the dam is supposed to be holding back is gone. "This is like a different world," said Pat Mulroy, the former head of the Southern Nevada Water Authority. She told CBS News senior national and environmental correspondent Ben Tracy that Lake Mead, the nation's largest reservoir, is on track to soon hit its lowest level ever recorded.

For the first time ever, the federal government is expected to declare a water shortage on the lower Colorado River later this summer. That will force automatic cuts to the water supply for Nevada and Arizona starting in 2022. Homeowners have higher priority and, at first, won't feel the pain as badly as farmers. Dan Thelander is a second-generation family farmer in Arizona's Pinal County. The water to grow his corn and alfalfa fields comes from Lake Mead. "If we don't have irrigation water, we can't farm," he said. "So, next year we are going to get about 25% less water, means we're going to have to fallow or not plant 25% of our land.” In 2023 Thelander and other farmers in this part of Arizona are expected to lose nearly all of their water from Lake Mead, so they are rushing to dig wells to pump groundwater to try to save their farms.

Fish have been dying on the Klamath since around May 4, according to the Yurok Tribal Fisheries Department. At that time, 97% of the juvenile salmon caught by the department’s in-river trapping device were infected with the disease C. shasta, and were either dead, or would die within days. Over a two-week period, 70% of the juvenile salmon caught in the trap were dead.

Irrigators upriver from the fish kill were told in mid-May that for the first time since “A” Canal in the Klamath Project began operating in 1907, they would not receive any water from it. The irrigators say they need 400,000 acre-feet of water but this year, they will receive just 33,000 acre-feet from the Klamath Project — a historic low. The situation has put pressure on an embattled region already caught in a cyclical mode of crisis due to a drying climate. “For salmon people, a juvenile fish kill is an absolute worst-case scenario,” Myers said in a statement.

I'm optimistic that the level will go back up. We are in a drought right now. There are farmers everywhere getting their water supply reduced.

GTPpower said:
I'm optimistic that the level will go back up. We are in a drought right now. There are farmers everywhere getting their water supply reduced.
Click to expand...

The level has been going down for decades

Stink Star said:
The level has been going down for decades
Click to expand...

Yes, but how many of those years were drought? In the early 2000's, it was at peak, but started to decrease very fast. In 2012ish, it recovered a decent amount, but has gone downhill since. One year of lots of rain and snow can make a huge difference.
J

what kind of population change has occurred during this same time frame?
I'm sure when the Hoover Dam was built the currently population, plus the steady rate, wasn't in the equation.

Man this is nuts. I remember it being a huge problem, water rationing and all back in ~2015, but then there was a year of crazy rainfall (circa 2018 IIRC).

The plan seems to be to ration water and hope for rainfall lol. That does not sound like a great plan. 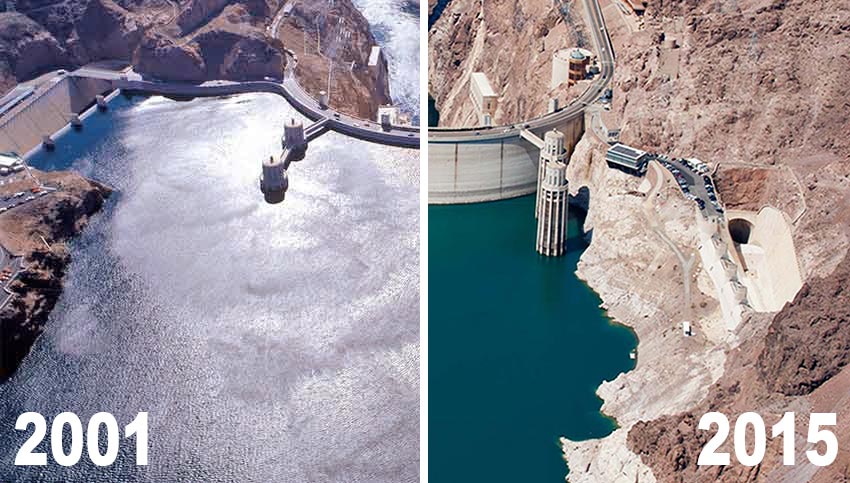 I was reading this the other day, some of those photos are amazing... The bathtub rings and over spill coffers to each side being completely empty are just shocking.

And then I saw someone post an editorial in the LA Times that they should build a pipeline to the great lakes and use our water.

I think the Rocky Mountains might have an issue with that

To piggy back on this. I actually was thinking of a similar idea but on a larger scale. Would this be feasible or within an affordable budget? Probably not.

But my idea was a larger centralized pipeline. From which you could have a few smaller ones off of it to different regions of the U.S..

So basically when there are historic rains in the southeast, move some of that excess water over to Nevada etc to fill this lake.

Again. It’s a wild idea, but short of basically restricting population in the area and cutting off some supply. Not sure there is a better one.

Mook said:
I think the Rocky Mountains might have an issue with that

and freezing temperatures in general.

i think we already went down this path on here somewhere

how about stop building shit in the desert?

I toured Hoover dam when it was really low in ~2014, I'd have to dig up pics to compare the bathtub ring. It does ebb and flow, they get freak rainfalls that refill the reservoir but its does seem to be trending worse as population grows. They've been talking about building a pipeline to the great lakes forever but its not going to happen, its a water rights issue with lots of red tape, and just way to many environmental challenges. Ironically the Great lakes are at record highs right now too last time I checked. I think they'd be better off building more desalination plants along the coasts and piping that.

you hittin' the good stuff this mornin' sailor?

N20GT said:
Just one of my random thoughts. Nevada has been trying to build a small 250 mile water pipeline for years and can't seem to get it through, and I don't understand why.

A pipeline from the miss out west has been discussed before. I don't really know enough to understand why it's not feasible

A plan to divert Mississippi flood waters to west is proposed | Business | The Earth Times
Click to expand...

Meanwhile billions have been spent on infrastructure to protect NOLA from flooding every spring
Click to expand...

Yaj Yak said:
dude i mean i dont even know where to fucking start.

first off- easy one- central US NEEEEDS the mississippi... start funnelling it off to some mormons in the desert for no reason at all? fuck that shit.

neat bullshit article from 8 years ago though

let's think about this logistically then... how the fuck are you going to pipe water (which FREEZES MIND YOU) across mountains and other major fucking rivers over 1300 FUCKING MILES
Click to expand...

Yaj Yak said:
one of these freezes.

OffshoreDrilling said:
That’s far as fuck. The volume of water that would need to be moved to be worthwhile and the infrastructure needed would be astronomical.

I used to run the water plant for DuPage County. Approximately a million people worth of population. Peak flows in summer were in the neighborhood of 140mil gallons/day. 1800hp pumps pushing 30MGD each and a couple 900hp 15MGD to be able to accommodate a lower flow situation. Discharged out of a 90” and 86” pipe at 100-120PSI. 5, 5 million gallon standpipes in the system to maintain head.

California’s population is just under 40 million people. The climate is much more arid. As the crow flies from the Mississippi River to lake mead is 1400miles. Huge elevation changes. Right of ways for that many miles across public, private and probably reservation land. Add min 500 miles of detours to that line. Multiple massive lines and dozens of lift stations to keep pressure up for transmission of water at that distance.

A bunch of desalination plants would be more practical in pretty much every way.
Click to expand...

Yaj Yak said:
i think we already went down this path on here somewhere
Click to expand...

Need elon to invent something to bore holes through the rockies so that when the miss tops its banks, we can turn on the switch and flood the desert. Still gotta stop the pipelines short of CA though

N20GT said:
Need elon to invent something to bore holes through the rockies so that when the miss tops its banks, we can turn on the switch and flood the desert. Still gotta stop the pipelines short of CA though
Click to expand...

I mean I don't really care about looziana or the desert tbh, so that works too.

IIRC when the damn was built and the lake created back in the 1930's the population is was supporting was about 600,000. Now it's about 9,000,000. It also provides drinking water to Arizona, Nevada, and part of Mexico, and is also responsible for generating electricity for parts of Arizona, California and Nevada.