R&T - 15 cars that were way ahead of their time 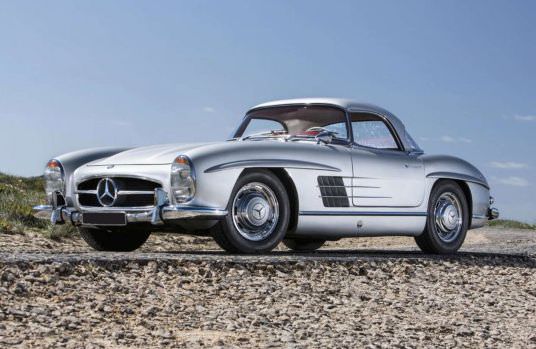 The 1955 300SL was the first production car to feature Bosch mechanical direct fuel injection, a groundbreaking piece of tech of the time. Allowing for more power and efficiency, it made the 300SL a dominating race car, and a fantastically capable road car. At the time of its release, the 300SL was the fastest road car you could buy. 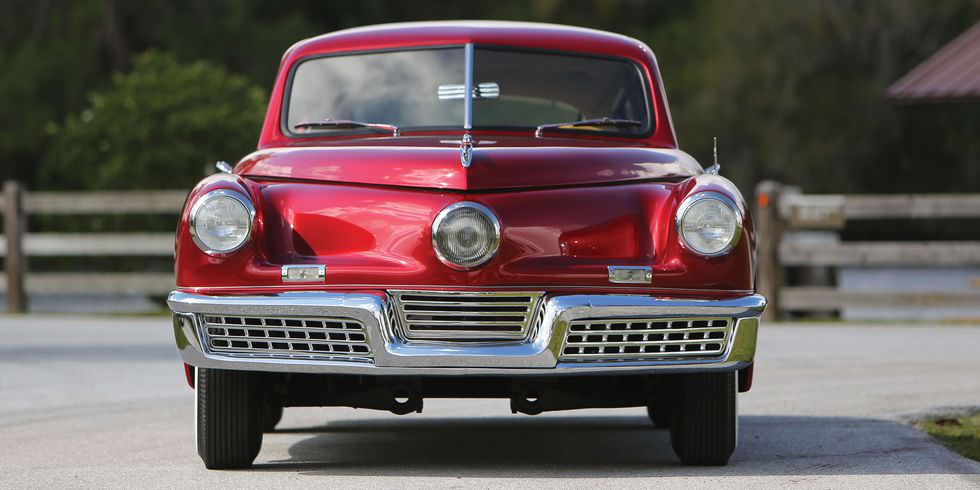 Preston Tucker had big plans for his 1948 sedan of the future. Things like disc brakes, independant suspension, and lights that rotated with wheel direction made the Tucker lightyears ahead of anything else of its time. Ultimately, though, Tucker failed to mass-produce his rear-engine, air-cooled sedan, and only 47 examples remain today. 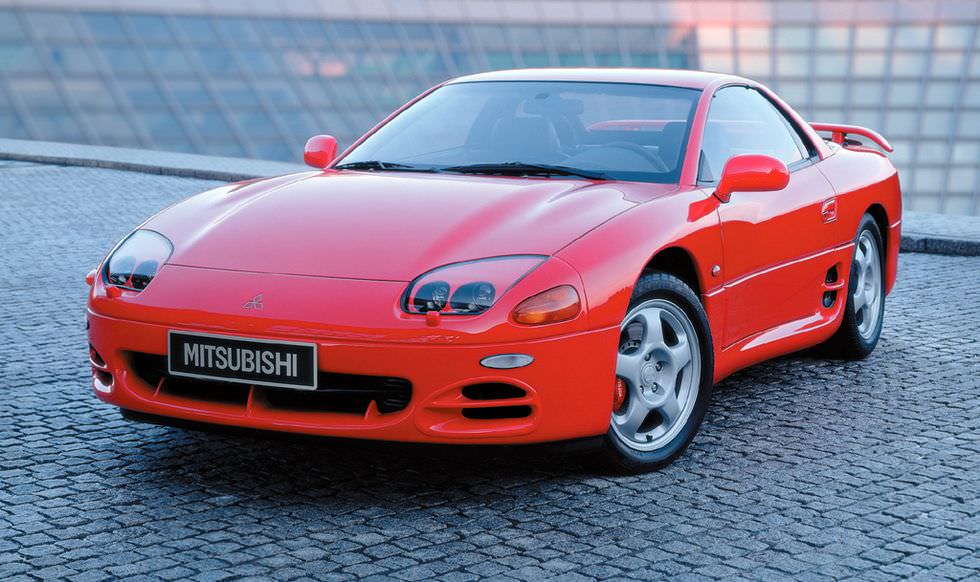 Adaptive suspension, four-wheel steering, and active aerodynamics are things you find on the supercars of today, but were all virtually unheard of in the early 1990s. The 3000GT VR-4, which debuted in 1994, had all of them. 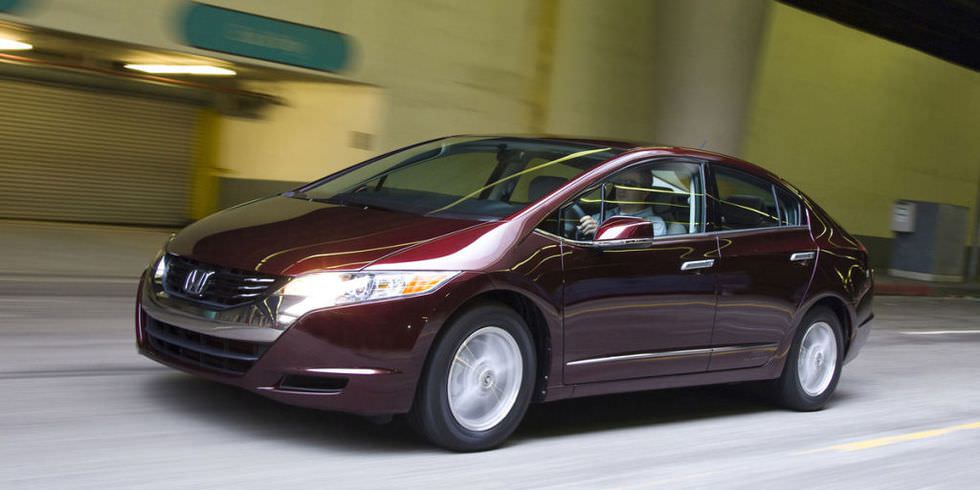 The FCX Clarity was the first hydrogen fuel cell car available to the public. But nobody could buy them because Honda only leased them, and only to people living in Southern California. The problem is that there's still no real infrastructure for hydrogen fueling, which makes these cars more experiment than replacement for production car. 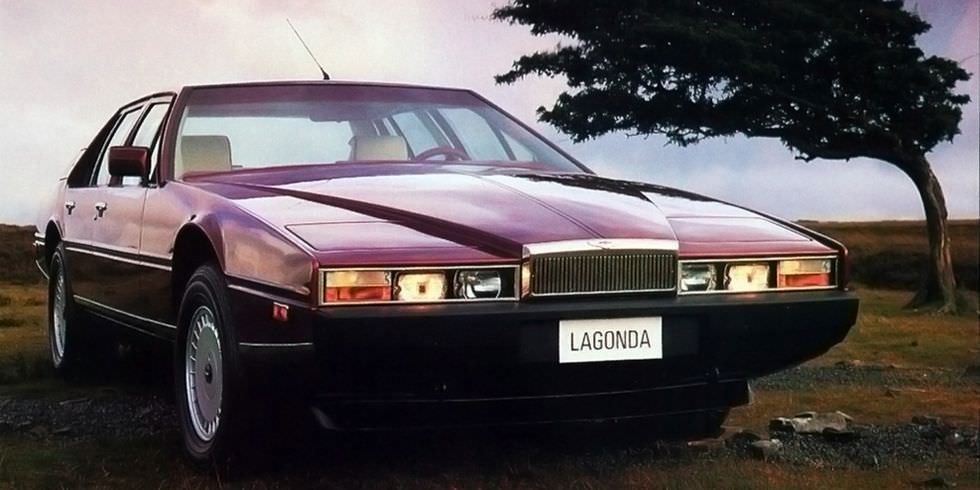 Some peopled hated it. Some people loved it. But you can't deny that the Lagonda's sharply wedge-shaped nose is eye-catching. That, paired with fairly advanced in-car tech made the Lagonda a bit too advanced for its time. It had a digital instrument panel in 1976, which was hilariously bad, by the way. The buttons were touch sensitive and often didn't work. Bright sunlight washed out the display. That's why screens didn't show up in cars again for decades after that, but man, was it stylish. 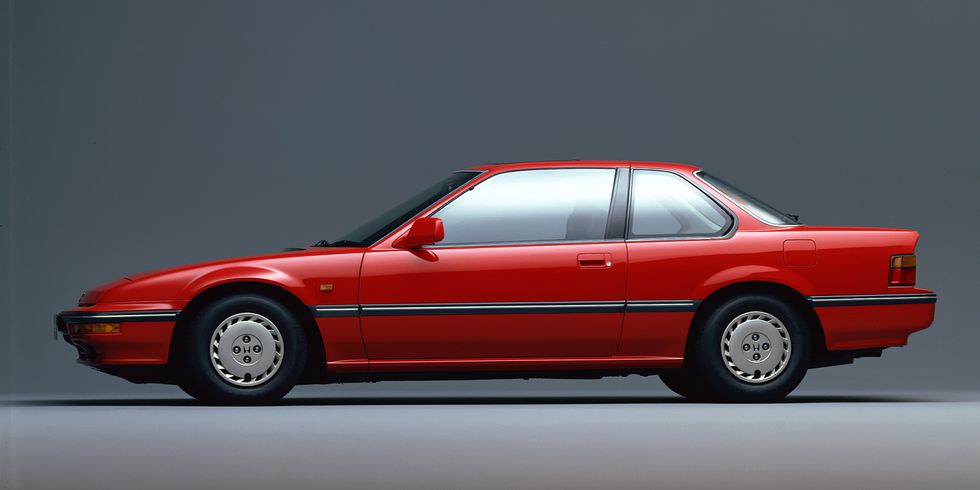 The 1987 Honda Prelude previewed design language that eventually made it to the NSX and is arguably the first mass-produced car to offer four-wheel steering. Are you a fan of how the Porsche Turbo, GT3, and 918 Spyder have it? Well, Honda had Porsche beaten by almost 25 years in offering the technology in a road car. 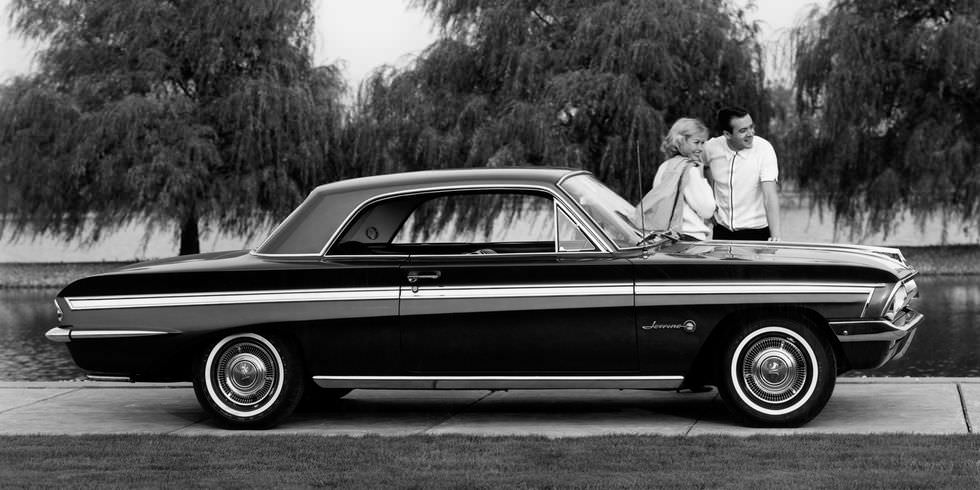 First off: Awesome name. Second: The Jetfire (and the Chevy Corvair Monza) was the first mass-produced turbocharged car in 1962. The Corvair had an air-cooled, rear-mounted, and turbocharged flat-six engine. The Jetfire has a 3.5-liter V8 that made 215 hp. It relied on "Turbo Rocket Fluid" to combat detonation problems. You know how almost all cars are turbocharged these days? These two started it all. 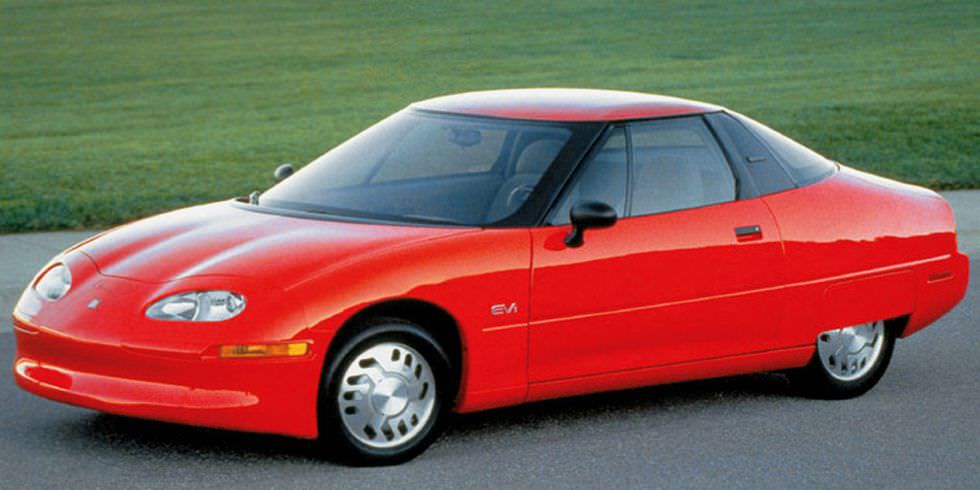 When you think of an electric car these days, your mind will almost automatically jump to a Tesla Model S. But Tesla isn't the first American automaker to create a mainstream EV. Back in the late 90s, GM had the EV1 for lease-only. Automakers have been playing around with EVs since the 1800s, but the EV1 was the first modern mass-produced EV. It was good for 137 hp and had a 70- to 100-mile range. 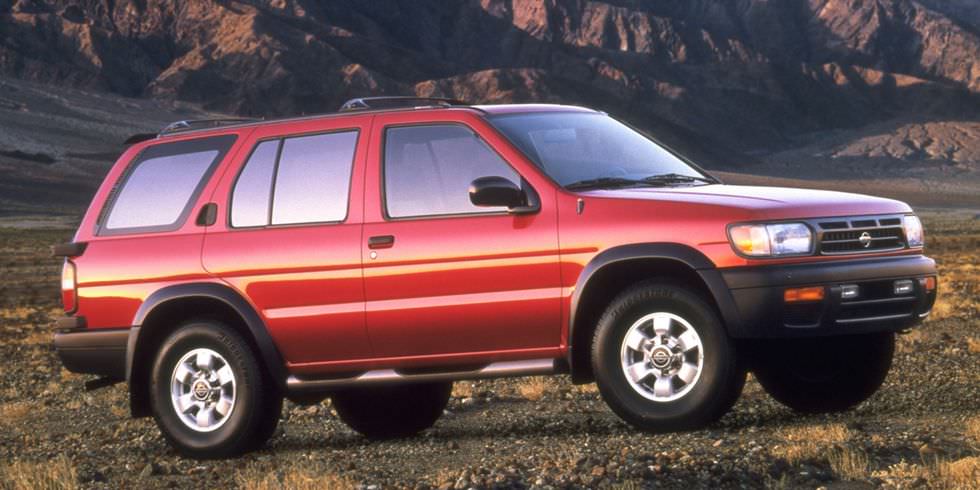 The second generation Pathfinder abandoned the body on frame construction of the first generation in favor of the unibody design. Although it returned to BoF for the third generation so the platform could be shared between Nissan's trucks and SUVs, the second-gen 1995 Pathfinder displayed the eventual path that most other BoF trucks took in switching to unibody designs (the XJ Jeep Cherokee being the first). 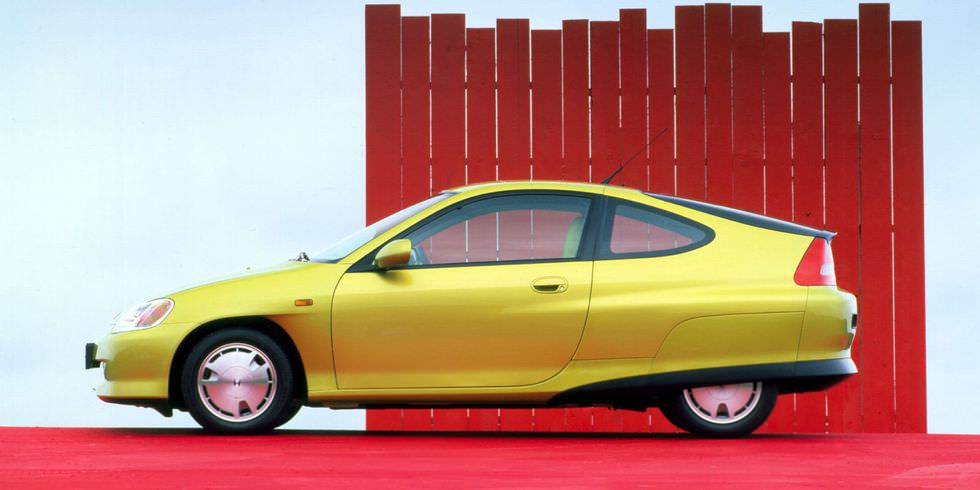 The Insight was introduced for 2000 and had a sleek design meant to minimize drag. It was the first mass-production hybrid car sold in the U.S., although its sales figures never managed to top those of the Toyota Prius. Honda discontinued the Insight in 2006, and brought it back again as a five-door hatch in 2010. 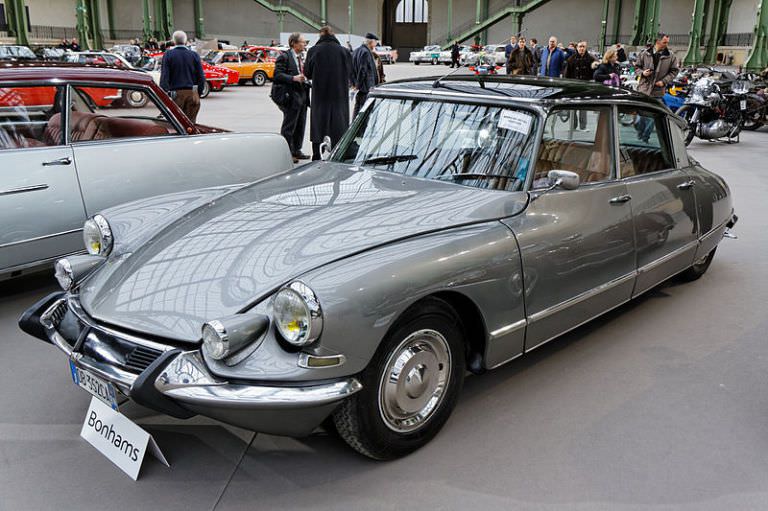 The DS21 wasn't just beautiful, it was also innovative. It was the first production car ever to come with front-disc brakes. It also had a self-leveling hydropneumatic suspension, which raised and lowered the car and gave it a "magic carpet" ride feel. Today, the system is used by Citroen, Rolls-Royce, and Maserati. 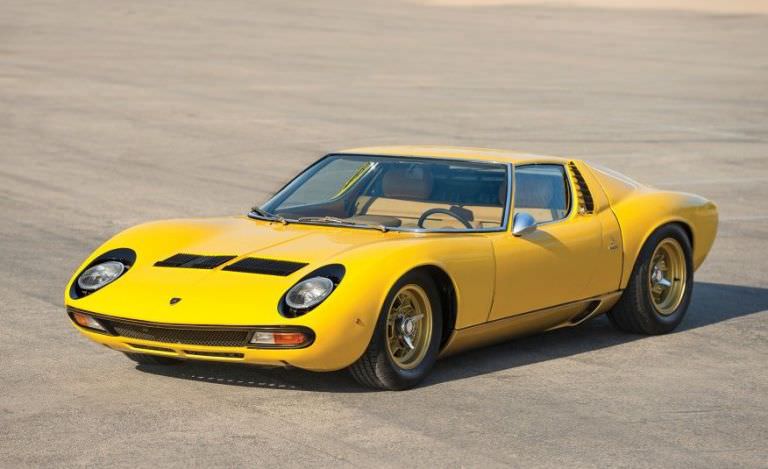 Every time the exotic silhouette of a mid-engined car catches your eye, the Lamborghini Miura's influence is there. It was the first serious production mid-engined supercar, and had a transversely mounted V12 tucked behind the passenger compartment. It delighted in being driven fast, and is still very expensive today. 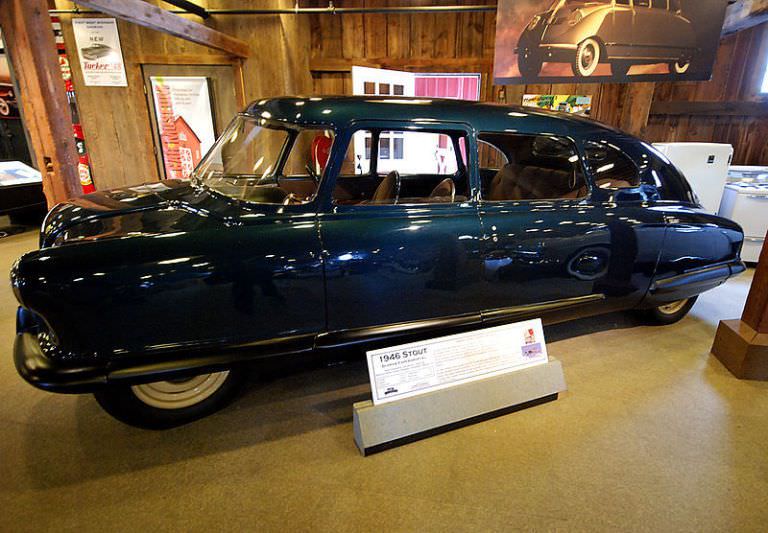 The retro looks are archetypal 1930s to 1940s American and it's the forerunner to the modern minivan. And it looks way, way better than any minivan. It had a rear-mounted Ford V8, which left the interior wide open for passengers. 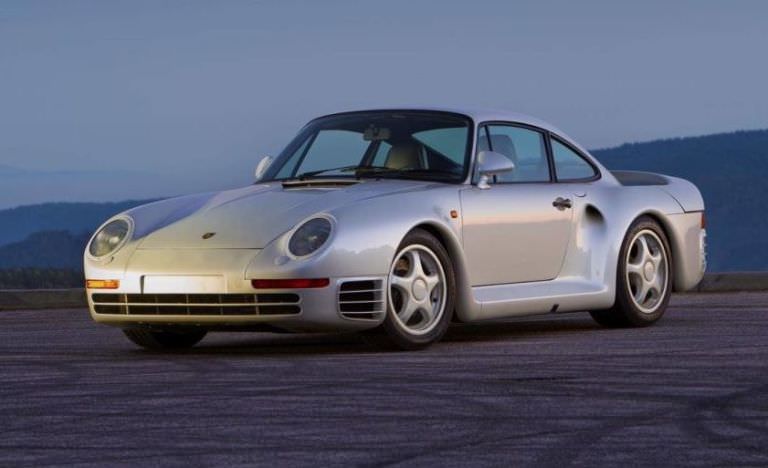 When it was introduced in 1986, the 959 was the fastest street-legal production car, with a top speed of 195 mph, and was widely recognized as the most technologically advanced road car ever built. Porsche only made 337 examples, and each car had a complicated AWD system that standardized AWD for all Turbo models following it. The twin-turbo flat-six made an obscene 444 hp. You could control ride height. It was the first passenger car to have an electronic tire-pressure monitoring system. Besides the Ferrari Testarossa, it was also one of the few cars to have zero lift aero. And it had titanium connecting rods. Who at the time was packing this stuff into their road cars? Nobody, that's who. 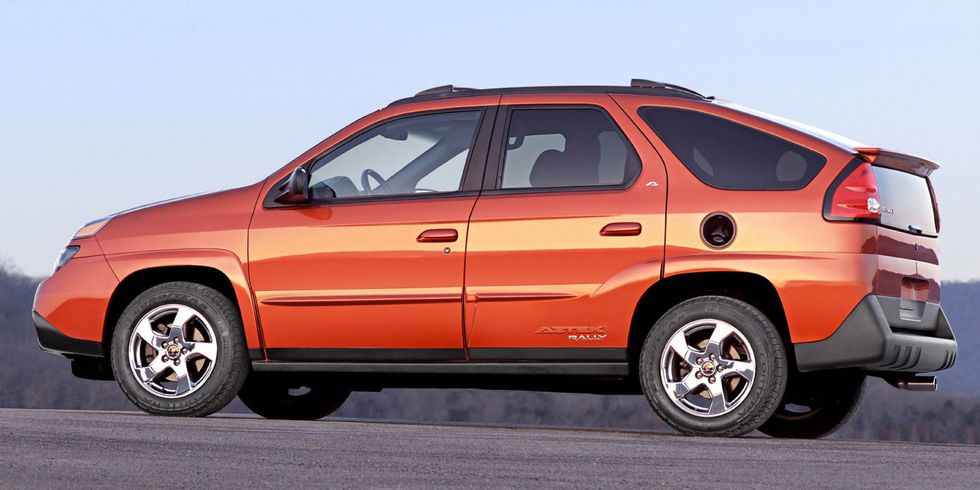 After considering the crossover craze that's seized the U.S. car market, you start to think that maybe the Pontiac Aztek was just a few years short of being a popular family-mover. Sure, people complain incessantly about its looks, but when you hold it up next to some of the other oddly shaped crossovers on the market, like the Lexus RX, is it really that weird?

hate on it all you want, it was for sure ahead of it's time.
OP

What made it actually advanced tho? It was a Pontiac so it was likely still using shit for the interior from 1985....what motor did it have? Was it "ahead of its time" simply b/c it was ugly and a weak ass crossover?
OP

Mook said:
What made it actually advanced tho? It was a Pontiac so it was likely still using shit for the interior from 1985....what motor did it have? Was it "ahead of its time" simply b/c it was ugly and a weak ass crossover?
Click to expand...

it wasn't a weak ass crossover though, in a time when there were no crossovers... it was the first.

now everything is a crossover and it's all that sells.

it had features that brands nowadays promote still.

Futuristic Features: Like Stephen Hawking, the Pontiac Aztec's a lot of great ideas packaged in a less than appealing exterior. One of the original crossovers, the Aztec featured a Jet-like heads-up display, NASA designer-designed dashboard, a cooler mounted inside the rear gate (which also doubled as a picnic table), rear-mounted audio controls for parties. Almost all of the features offered on the Aztec were later offered on more attractive, more successful vehicles.
Click to expand...

Pontiac Aztek
After considering the crossover craze that's seized the U.S. car market, you start to think that maybe the Pontiac Aztek was just a few years short of being a popular family-mover. Sure, people complain incessantly about its looks, but when you hold it up next to some of the other oddly shaped crossovers on the market, like the Lexus RX, is it really that weird?
Click to expand...

Why The Pontiac Aztek Will Be Collectible | GM Authority

h, the Pontiac Aztek. Where do we begin? One could say the Aztek was ahead of its time as a crossover utility vehicle, others could say it’s the ugliest vehicle of all time.

However, the Pontiac Aztek has a lot going for it when it comes to being a future collectible vehicle. That’s right, the unloved Pontiac crossover could potentially be worth something more than we’d ever imagine. Autoblog has compiled a list of 10 reasons why buying an Aztek now could be a smart move when it comes to collector vehicles, and there is some convincing evidence.

Foremost, it follows the Ford Edsel strategy. At one point, the unloved Edsel was deemed the ugliest vehicle of all time. But, now it’s worth something. Why? Because people rallied around the car in a community fashion, bringing the Edsel to heights nobody saw coming. In good condition, an Edsel fetches around $50,000 today.

Speaking of communities, the Pontiac Aztek has a huge following. Heading over to Aztek Fan Club shows tons of fans rallying around the awkward crossover. That’s normally a pretty good sign of future collectibility: people care.

Not to mention, the Aztek got so much bad press during its on-sale years, it has become a curious case for so many. Why was it so bad? Is it that bad? Has the design grown on us? It asks a lot of question and piques interest in key areas where collector cars offer similar conversations.

Add in the fact it’s been featured across American pop culture and the Aztek (Breaking Bad and American Dad) could be diagnosed with Isuzu Vehicross syndrome. The Vehicross is arguably an incredible cult classic and was also featured in the film Mission To Mars.

Millennials have taken a liking to the Pontiac Aztek, too, scooping up the dirt-cheap crossovers like crazy. Are they on to something? Are we staring at a future collectible? Time will only tell.

Read more: Why The Pontiac Aztek Will Be Collectible | GM Authority
Click to expand...

now to delete my google & browser history from ever typing aztek so many fucking times.

The previous NSX. Simply for the engineering and the fact that it was so balanced, the simplicity worked. Still to this day it works.

KJ hits all my points on the Aztek.

Functionally, it was a swiss army knife. It was just had a "quirky" wrapper put around it.

I'd have rocked this... V8 and all. I seem to recall it being something GM had created for a show. Sadly it also came with nearly all of the problems GM was having with different models wrapped into 1 car.

if i disagree with anything... it's the pathfinder... they say they put it because it was unibody... but the cherokee was LONG before...

[MENTION=19]Yaj Yak[/MENTION] You lose all credibility when you reference jalopnik. lmfao


I have to say, as U G L Y as the Aztek was, it had a lot of features that made it a camper in a crossover size. But it was just too ugly for the masses. lol