This new electric Kia will also offer Standard and Long Range battery packs in both RWD and AWD configurations ranging from 168 hp to 321 hp. 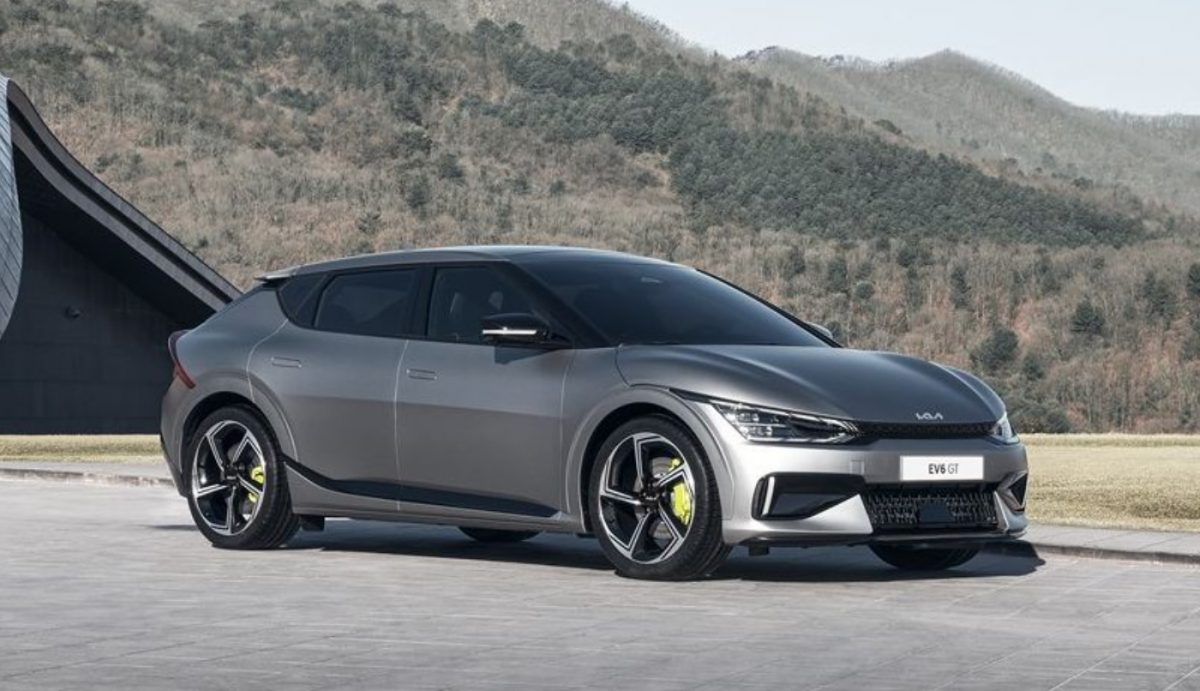 Kia has surprised us with a high-performance version of its new electric car, the EV6. Called the EV6 GT, this range-topping model features a all-wheel-drive powertrain with front and rear electric motors that produce a total of 577 horsepower and 546 pound-feet of torque. It's available only with the larger of the EV6's two battery packs and also features visual tweaks to set it apart from the lesser versions.

Kia's performance claims for the GT are impressive: a sprint to 62 mph in 3.5 seconds and a top speed of 128 mph. It also features software that is said to to mimic the behavior of a limited-slip differential. Hyundai has not announced any sort of performance version of the related Ioniq 5 EV, so Kia may have the exclusive on this high-powered drivetrain.

The GT looks a bit different than other EV6s thanks to larger wheels and tires and more aggressive front and rear fascias. Yellow brake calipers match with yellow accents found inside the cabin, and the seats look sporty and aggressively bolstered. There will also be a GT-Line version of the EV6 with similar visual changes as the GT but a smaller battery pack and less powerful drivetrains.

The various configurations for the standard EV6 and GT-Line models include a 168-hp one-motor RWD model or a 232-hp two-motor AWD model with the Standard Range battery pack and a 225-hp one-motor RWD and a 321-hp two-motor AWD model with the Long Range battery pack. Kia claims that the RWD Long Range configuration will provide a 316-mile range on the European WLTP cycle; U.S.-specific EPA range numbers will likely be lower.

We should get more detailed U.S. information for the EV6 within the next few months, as Kia says that its first EV will go on sale in the second half of this year. We expect a starting price of around $45,000 for the standard model, with the performance-oriented GT pushing much higher than that.

Damn that looks good. I never thought I’d say that about a Kia.

Tesla, are you paying attention to this styling?

I think it looks good. Would look even better with some wide body fender

Nm. I take it back. They spent all their time on the front.

That ass is hideous.

Thirdgen89GTA said:
Nm. I take it back. They spent all their time on the front.

That ass is hideous.

Yeah, I assume that rear is designed for aero, but it would look way better with a panamera rear end.

Imagine getting beat in a 911 by a Kia. I think Id be on suicide watch

This thing will be worth a box of rocks in a year. This has negative equity written all over it.

This is basically the e-mustang chassis right??

GLADIATOR said:
This thing will be worth a box of rocks in a year. This has negative equity written all over it.

This is basically the e-mustang chassis right??
Click to expand...

Cant possibly be worse than the Jetta.