What did my kid do v. iPhone

This is driving me fucking nuts. Handed my kid the iPhone at dinner the other night. Whatever he did, when I took the phone back it said “iPhone storage full”. Had a shit ton of space before that.

Unless he magically told EVERY picture to save to device, no clue what he did

Fml. I can’t even receive a pic in a message

for starters, at least it turns on still. Can you double click home and see the recent apps? that may help guide ya

Do you have it backed up? maybe a reset is needed.
OP 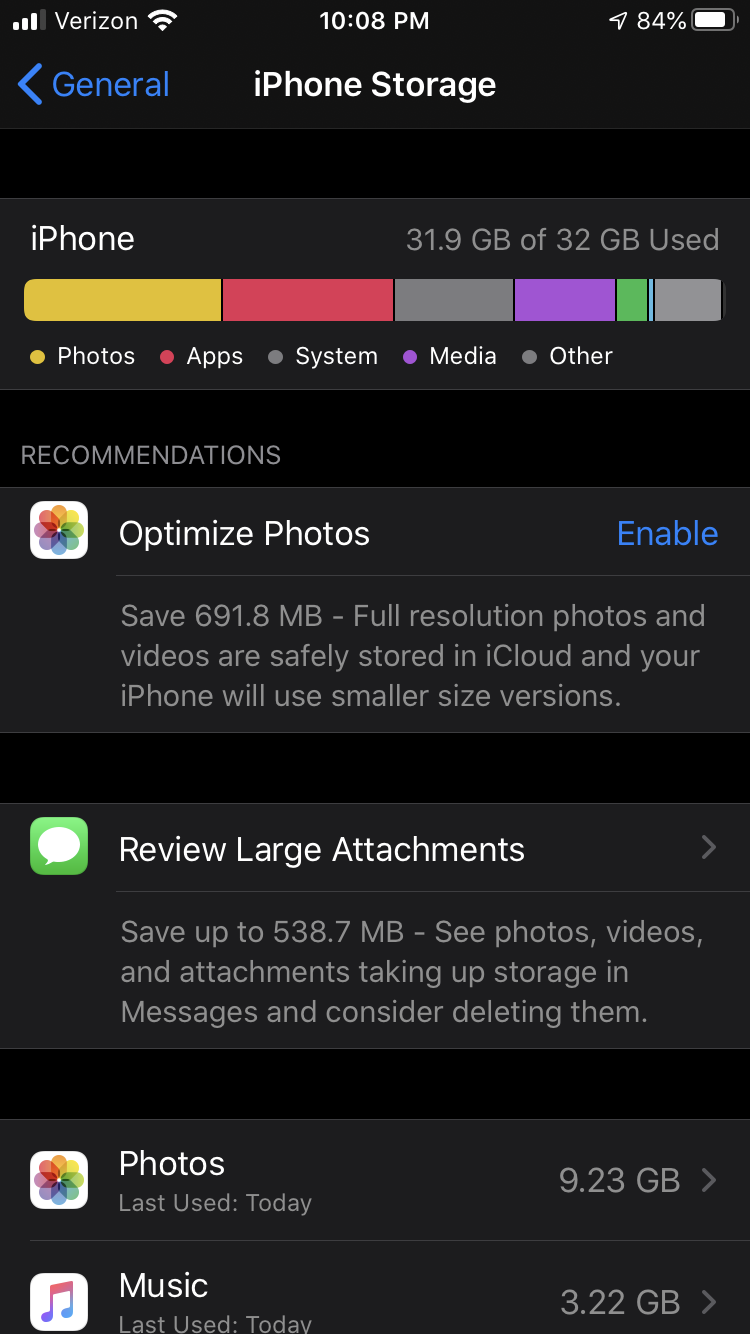 A very quick search, didnt even read lol. So probably not it.


My Iphone Storage went up after backing up to Google Photos. "Other" now uses more space than "Apps" - Google Photos Community

9 gigs filled your phone? do you have like 50 gigs of apps or something on there?
OP

walbsy said:
for starters, at least it turns on still. Can you double click home and see the recent apps? that may help guide ya

Do you have it backed up? maybe a reset is needed.
Click to expand...

I mean id prefer to actually solve the issue instead of Reset. He did this Saturday so I’ve used all kinds of apps since then
OP

Stink Star Productions said:
9 gigs filled your phone? do you have like 50 gigs of apps or something on there?
Click to expand...

32gig junk phone. Doesn’t take much to fill it

Weird issue though. do You have unusual data usage?
OP

Fuck you apple. Based on this post I toggled iCloud photos off then on, and it fixed it

We will never know what he did lol

My 16GB iphone 6 shows that it is using 1.2GB storage for photos and camera. I deleted the few photos I had on the phone and it continues to show 1.2
www.google.com
OP

Stink Star Productions said:
Weird issue though. do You have unusual data usage?
Click to expand...

It’s a company phone so I never look at it or reset it, so I can’t really tell
OP

OK so I'd just like to state that whatever he did totally fubar'd this phone. No matter what I do, the phone fills itself up. Since he did this I've offloaded every single picture, deleted the facebook app (almost a half gig), cleared safari twice (clearing 300mb), and removed 1.6 gigs worth of downloaded music

Every time I offload something, it's better for like 30 minutes, then magically fills itself back up again even if I don't touch the fucking thing. It's unreal. I was at 30.6 gigs this morning vs capacity of 32 gigs and it said it was too full to save or take a picture (wtf). Then I offloaded FB and got down to 30.2 gigs. Pick it up an hour later......32 GIGS ON THE PHONE and now I can't even receive texts

Backup everything and factory reset.
OP

It's funny, it actually says it's "too full for an icloud backup". Considering I have like 40 gigs worth of capacity on icloud it's referencing the phone, which doesn't make sense but w/e. It last backed up on 7/8 so I'm fine

I just tried "erase all settings", one step short of a factory reset, we'll see if that does anything. I don't feel like waiting hours for it to re-download everything from the cloud but if this doesn't work, that's the next step
OP

Btw my "other" category is taking up 17.7 gigs. trying to find out what's in there, that's like double what it should be

Sounds like you need to go to an apple store, or call apple. have a nerd look at it.

he probably checked some stupid setting that you haven't found yet.

This shit isn't magic. Check your settings on synced data. Music, photos, apps etc. It doesn't just magically grow for no reason. If it's happening that fast then it should be STUPID OBVIOUS what it is.
OP

tinfoilhat said:
This shit isn't magic. Check your settings on synced data. Music, photos, apps etc. It doesn't just magically grow for no reason. If it's happening that fast then it should be STUPID OBVIOUS what it is.
Click to expand...

The "other" category ballooned up to 18.7 gigs. I searched "sync" on the phone to find every single option. Icloud sync was on, which seems totally unnecessary because i think icloud "backup" is all that matters when you only have 1 apple device, so I turned that off. Dropped to 18.4 gigs after a restart...maybe it'll keep going down? I didn't see any others. Music storage is down 2 gigs now and if I turn that sync off it says i'll lose my apple library songs. I don't have anything in the calendar, etcetc
OP

Did a factory reset and now with all apps downloaded and all my old texts, I have 17 gigs of free space. “Other” dropped from 19 gigs to 2 gigs

What exactly was it filling up with? If that can be discovered, it might be a clue.

We just had a similar issue with my 79 year old dad that was using a flip phone. We gave him an old iPhone 6 we had laying around. It worked perfect. A week later he calls me that it doesn’t work and he wants his flip phone back. He was pressing everything like a 2 year old to the point the phone had no sound. We had to reset to factory settings and I made it so he didn’t have to enter passcode to enter. I eliminated all “unnecessary” apps so he wouldn’t get confused...lol. He just wanted to use it as a phone. “I don’t need the weather app!”....bah humbug!
OP

nytebyte said:
What exactly was it filling up with? If that can be discovered, it might be a clue.
Click to expand...

I wish I knew. It doesn’t itemize the “other” storage bucket. Didn’t see anything using an abnormal amount of battery, or any weird sync issues