What are you working on Today?!

Bob Hope said:
What brand of line lock do you prefer?
Click to expand...

Wilwood or Hurst. I've had the eBay/china ones cause a lockup issue before. Won't ever do that again.

Finally had a chance to get around to look at some of the new house’ mechanicals.

Basement furnace is from 1990, attic furnace from 1990’, same for both AC’s. Fucking immaculately maintained, unbelievably good condition and cleanliness. One AC needs a compressor start capacitor, the other needs a condenser fan cap.

We’ve got two basement watchdog backup sump pumps on the house. Batteries were dead and cells dry on both. Filled them both back up with distilled water, currently sitting on a desulfating charger to hopefully revive them.

I need to get a spare pump and solid state switch to keep around. The footing pump has a constant trickle of groundwater coming in. I’m sure cycling so often is going to kill it as soon as we have a good rain storm to saturate the ground.

"but how many acres'

Wheel 'upgrade' on the camper as I get it ready for this weekends outing... 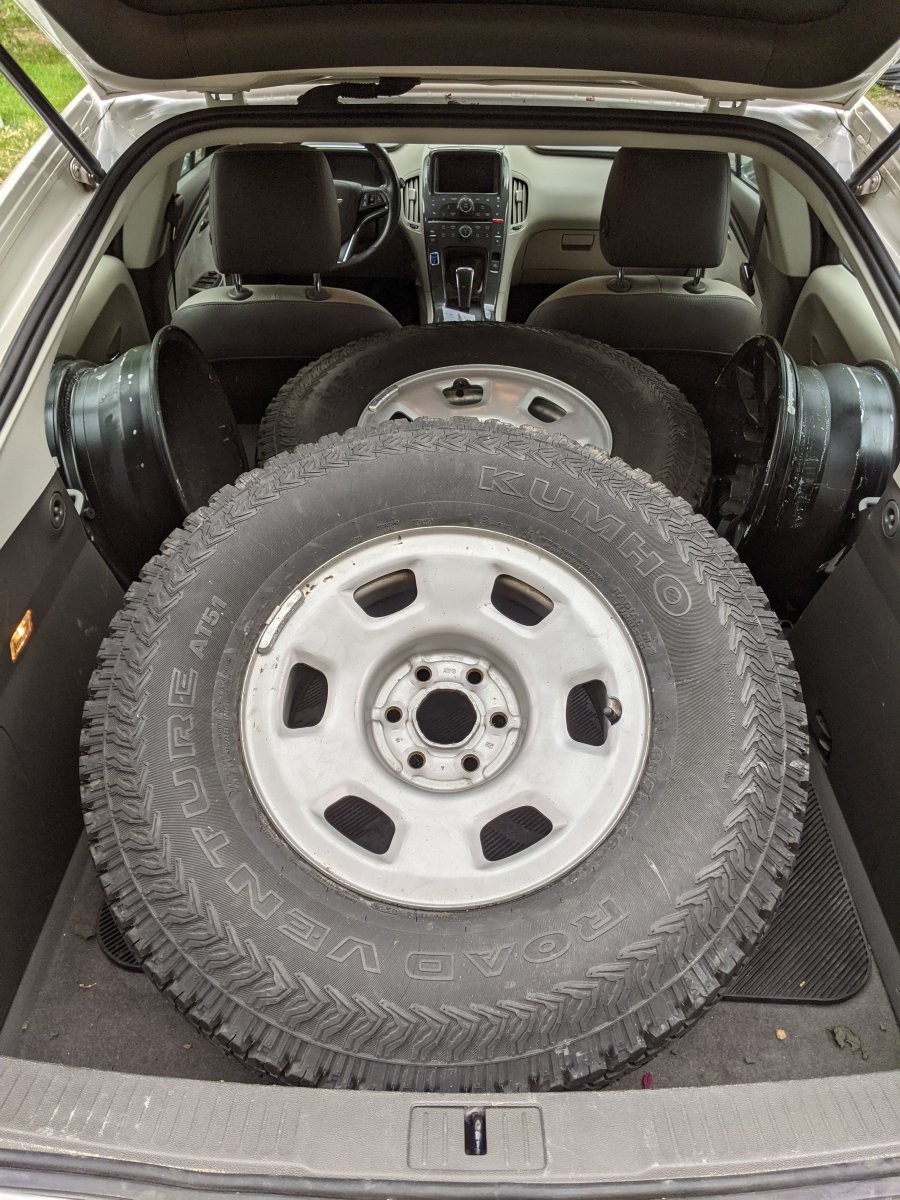 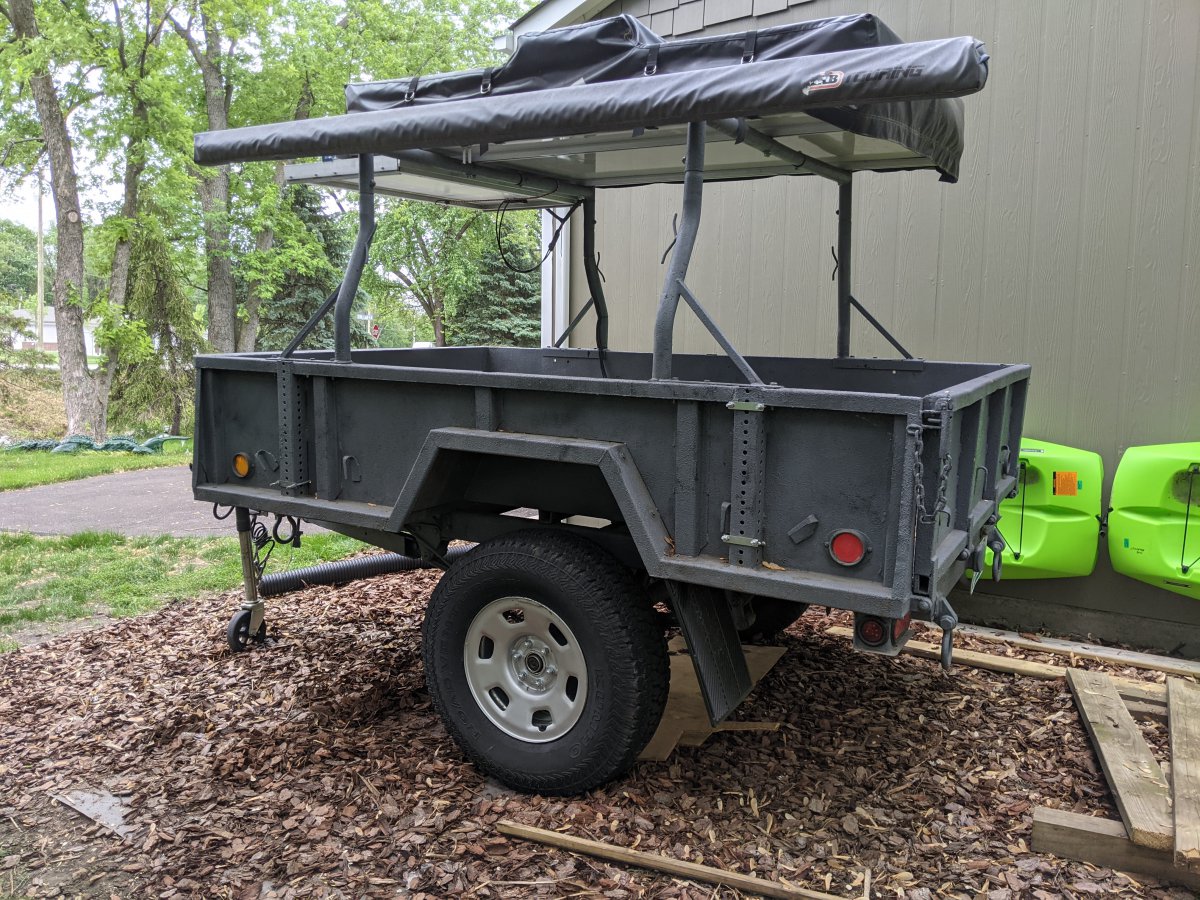 Because work truck wheels? It'll be nice to have a spare since I can now use the one from the truck. Last years week long trip was a bit of a gamble that I wanted to not repeat.

Because work truck wheels? It'll be nice to have a spare since I can now use the one from the truck. Last years week long trip was a bit of a gamble that I wanted to not repeat.
OP

EmersonHart13 said:
Because work truck wheels? It'll be nice to have a spare since I can now use the one from the truck. Last years week long trip was a bit of a gamble that I wanted to not repeat.
Click to expand...

They almost look too "shiny" for that beautiful trailer.

IceCreamAssassin said:
They almost look too "shiny" for that beautiful trailer.
Click to expand...

Give them some time outside, where they will live now, and they will catch up. LOL They spent the last year in the garage waiting on wheel spacers which I had a hard time getting due to COVID.

So yea I'm gunna have a major whiney bitch moment. This is the type of bullshit work that I don't belong doing. And of course this is going to be a management fault cause if they were doing their job and advertising correctly I wouldn't have to be doing this fucking peasant $22/hr pee on workers job... Gotta drop this trans in this truck. This is the shit where we should have a guy if that caliber in here doing this r&r BS all day... Not me... This ain't my wheel house. 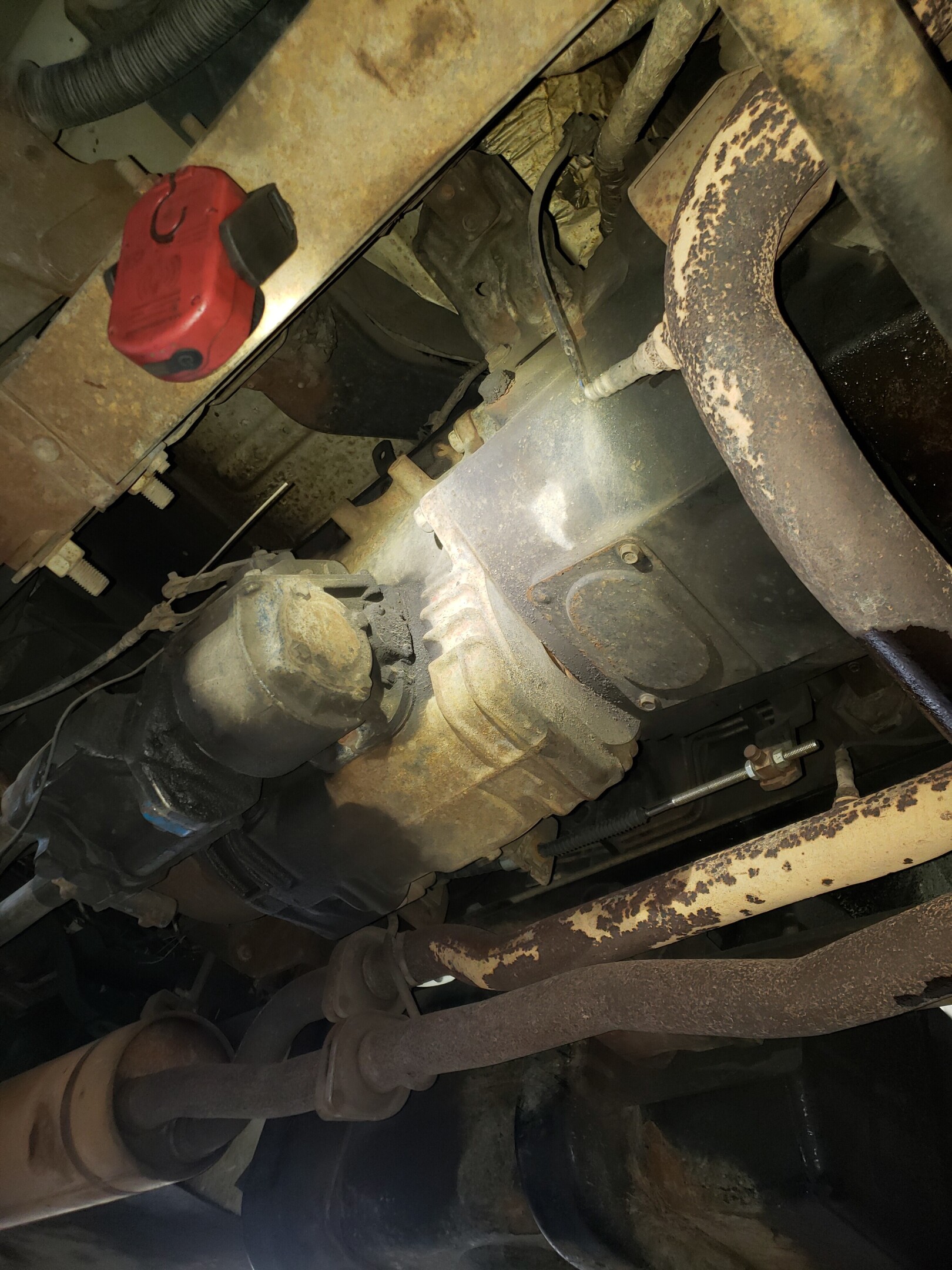 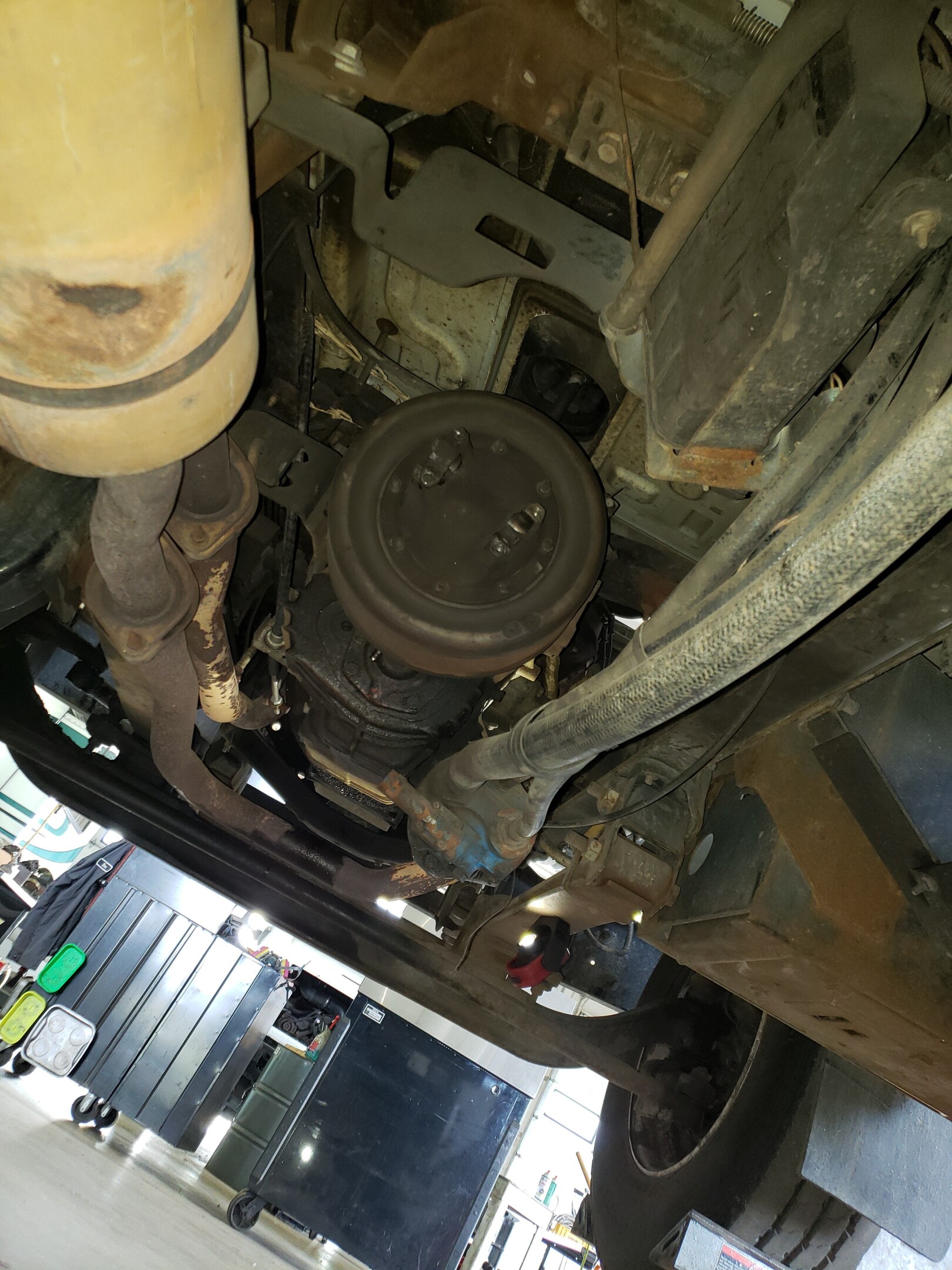 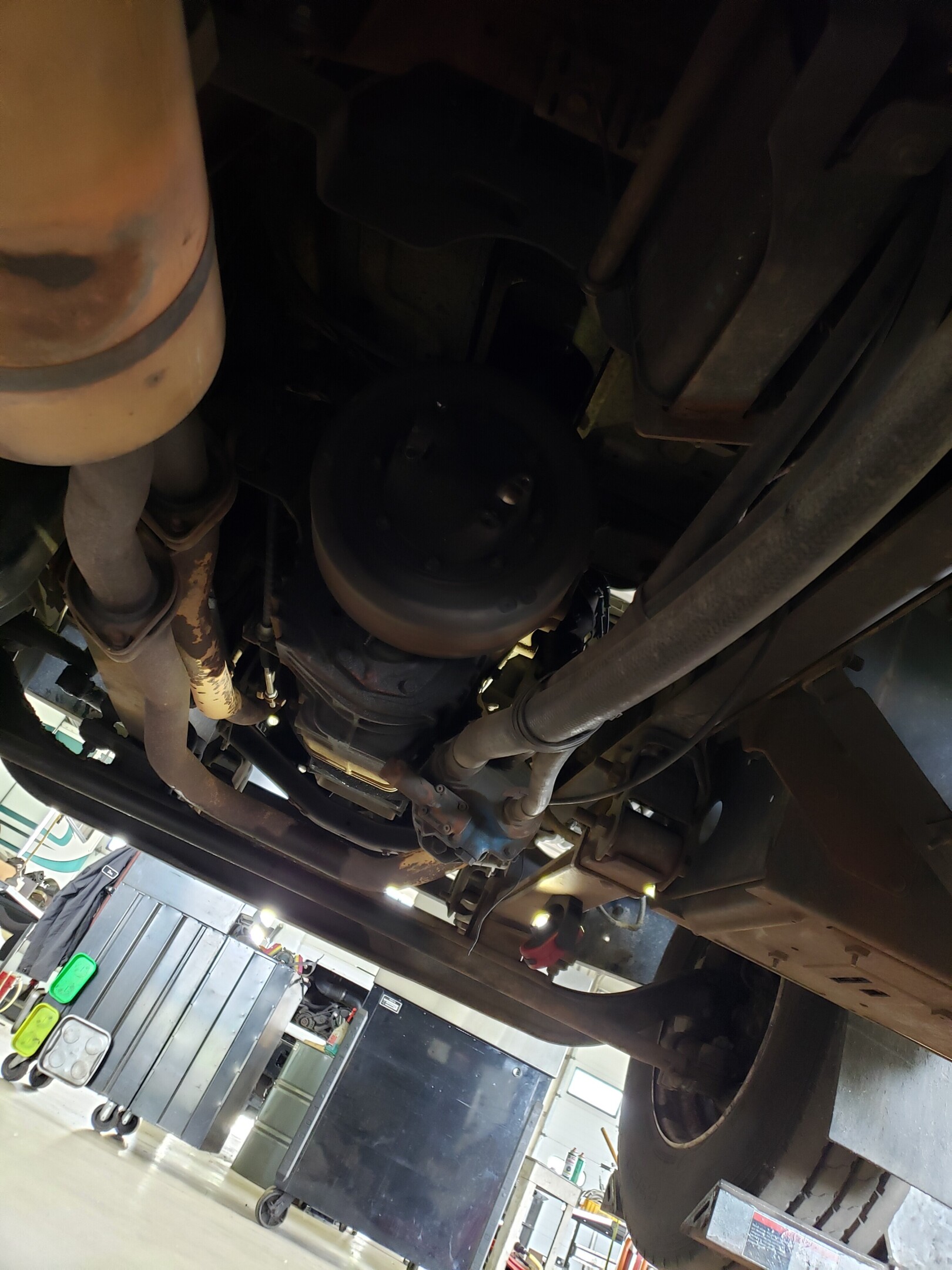 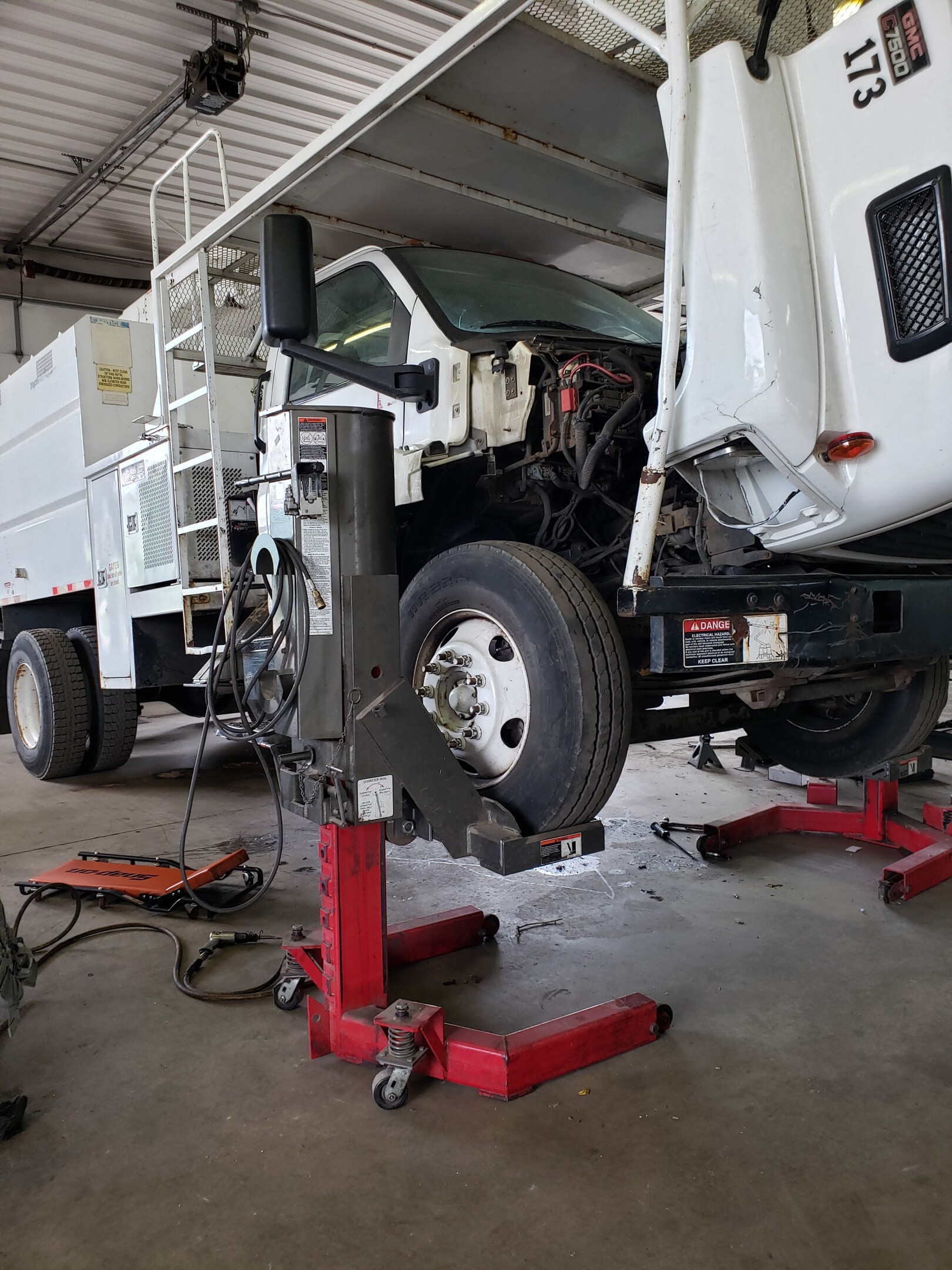 Finally organized some records. Top 4 cubes are the stuff I think I’ll listen to the most in alphabetical order. The bottom cubes are like half of the rest in no order whatsoever but I think I may organize them by genre. Also the bottom right cube is all Beatles. I have another giant box set that wont fit anywhere, but it is worth a few hundred so i don’t want it sitting on the floor for the vacuum to bump into it. 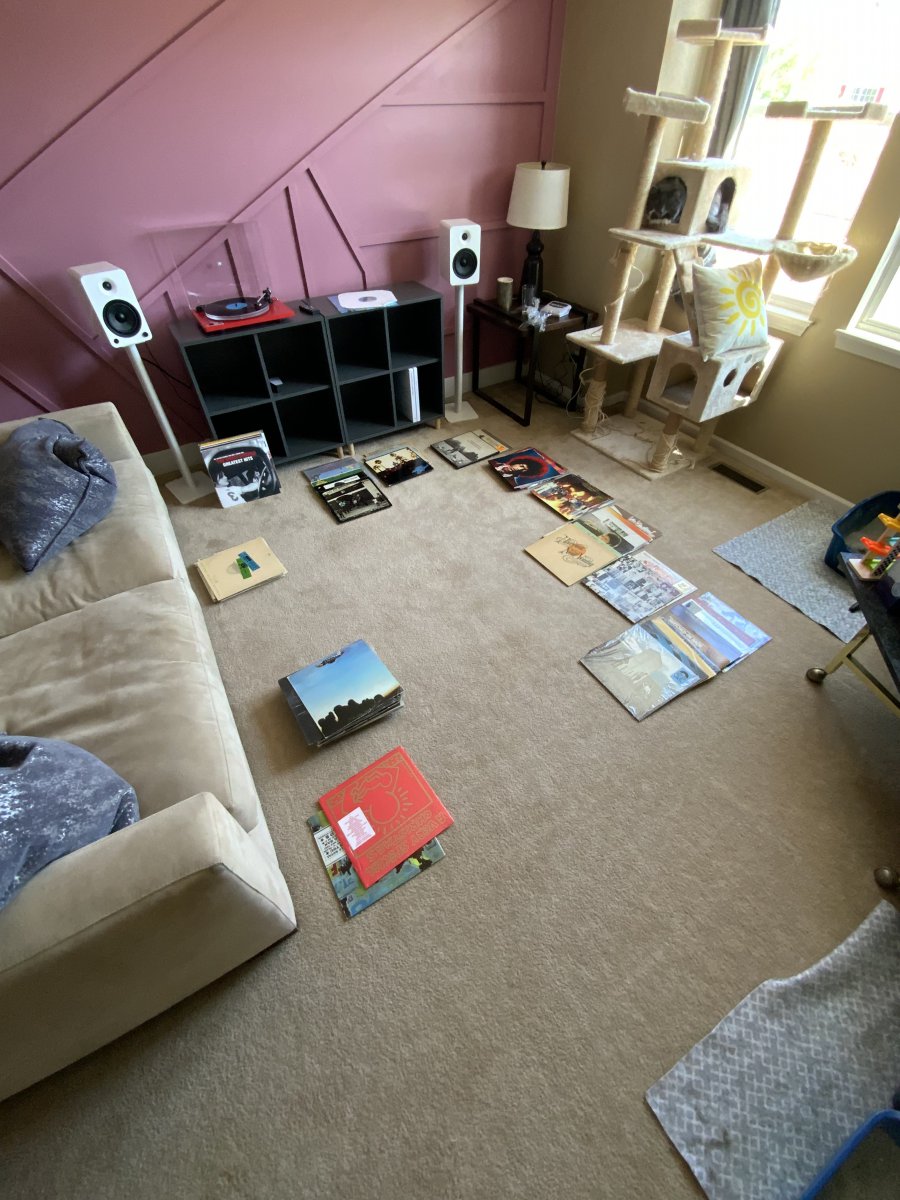 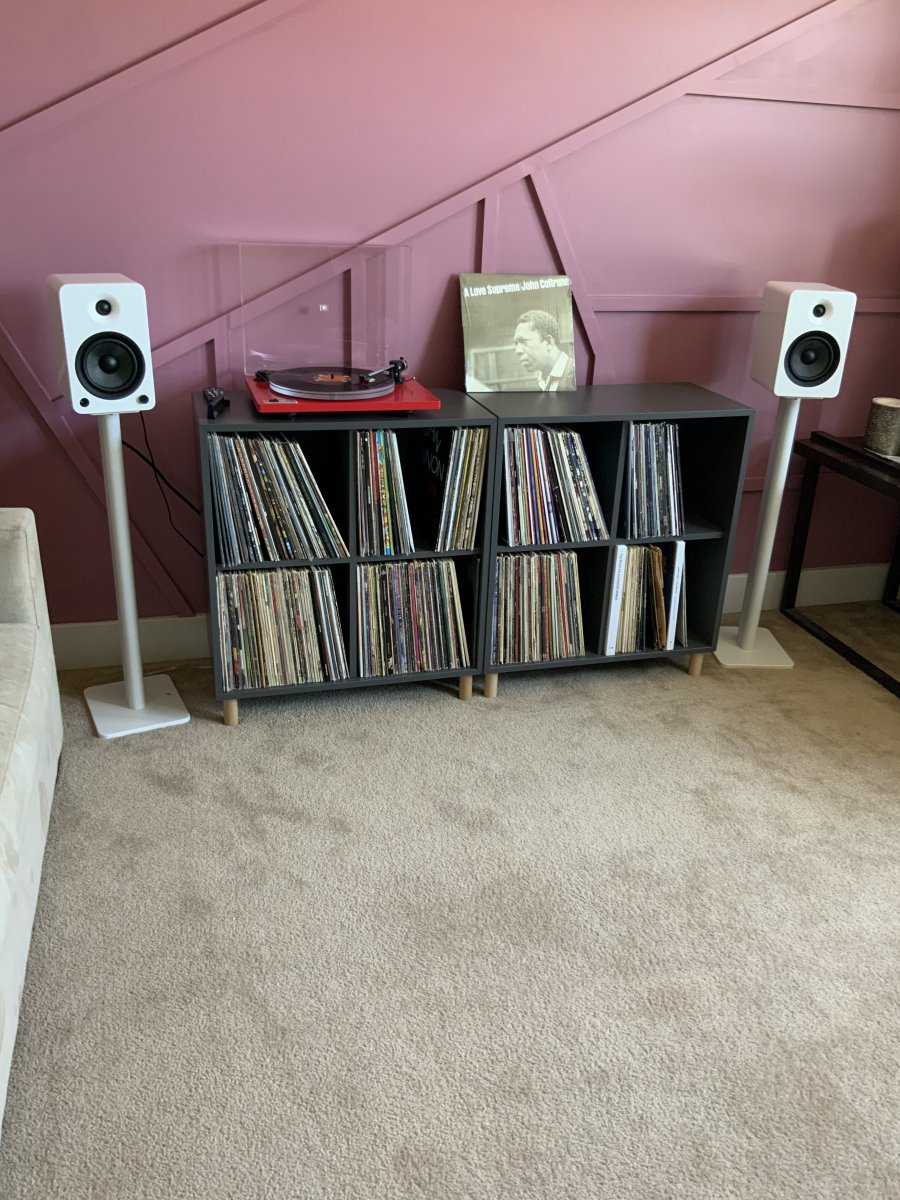 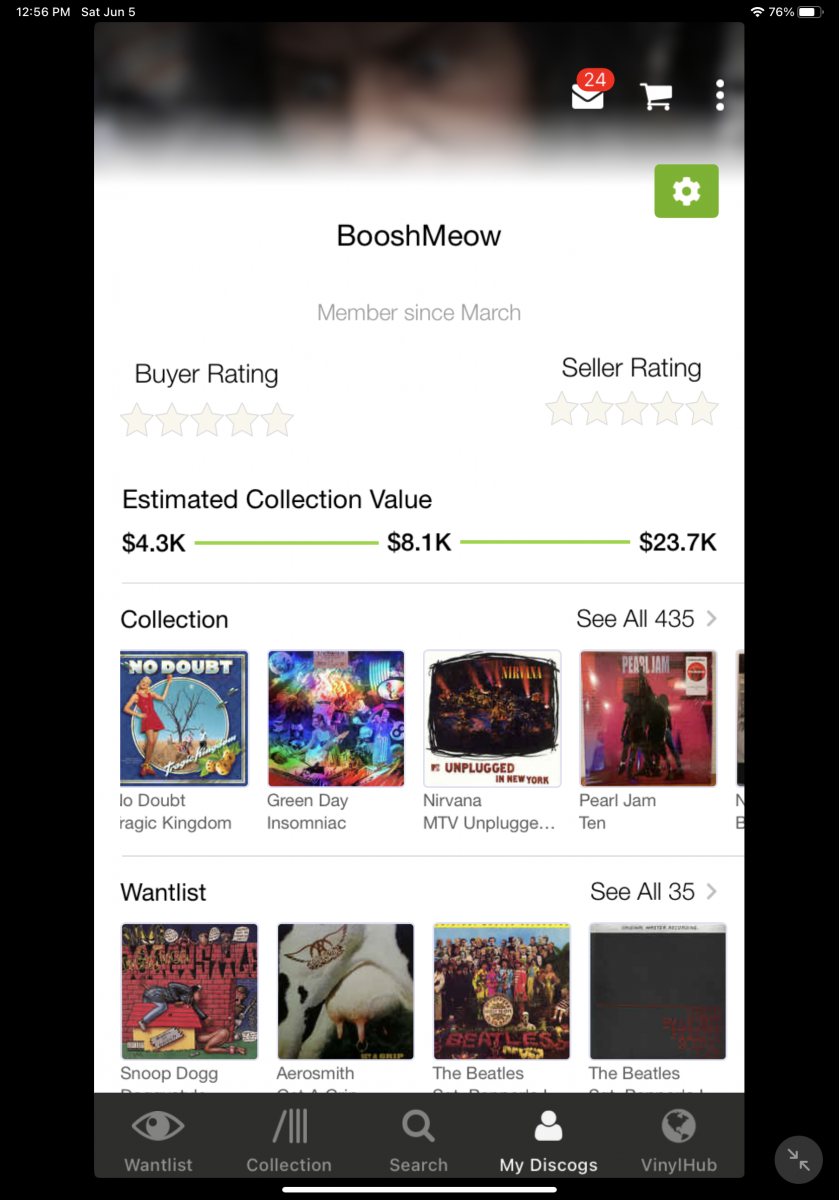 Just donuts... Zero semis have showed up in White Sands with our equipment from ND today. 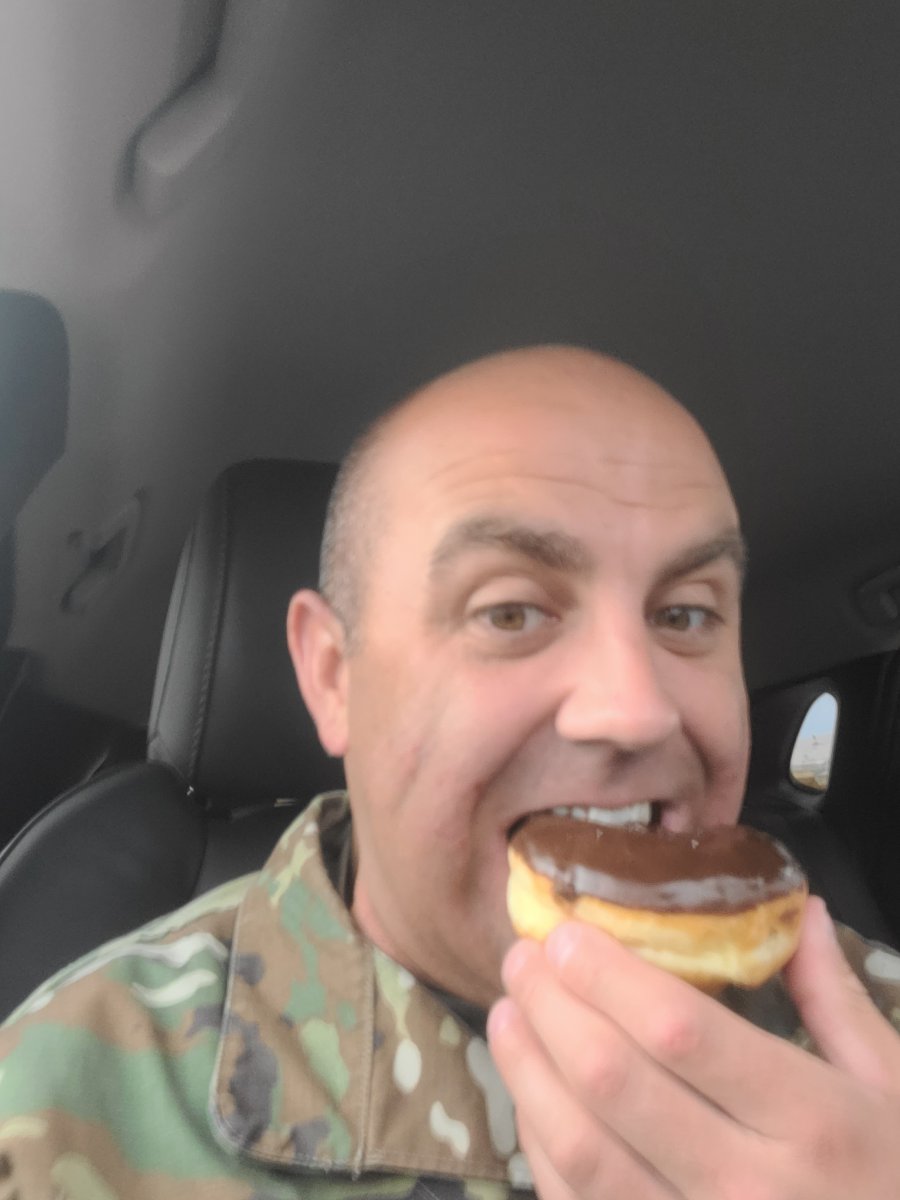 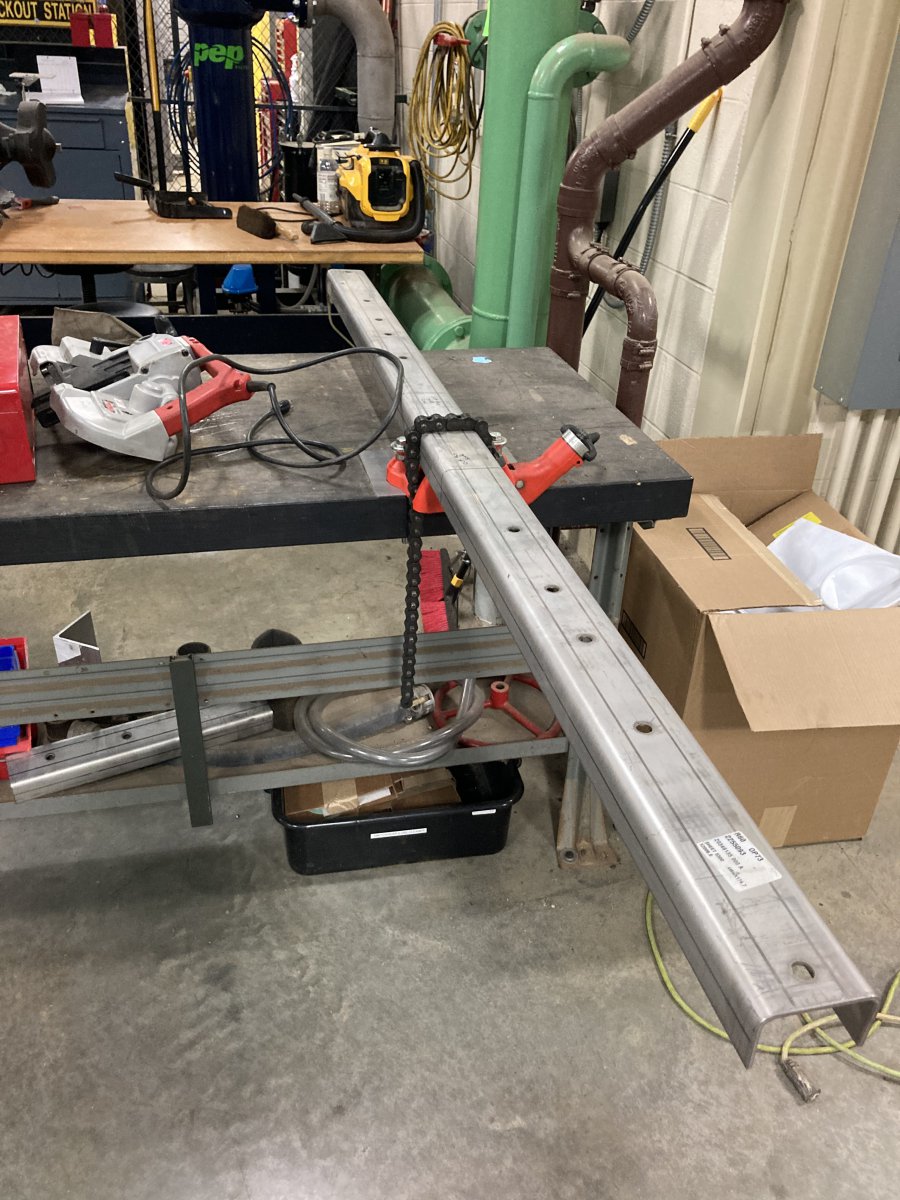 I need a garage workbench at home and I’ve got maybe 40 of these 301 stainless channels laying around that are “garbage”. Starting to cut them up to build a megafuck overkill $1500 workbench that costs me zero dollars. Going to make it 30”x 80” and probably spend some actual money for a butcher block top.

Woke up this morning to my wife saying we don’t have hot water. Took a look and the insulation was wet, so I thought shit that’s not good. Check out the upper element of the electric water heater we have since I just replaced the lower one last year and the upper was leaking. Cut power and as I was unscrewing the wire terminals the element sprung a leak and just started spraying all over me. Couldn’t help but start laughing.

Ultimately got the element out and my local ACE had the element I needed to replace it. Good to go now. When I took the element out, I chuckled and said well there is your problem to my wife. 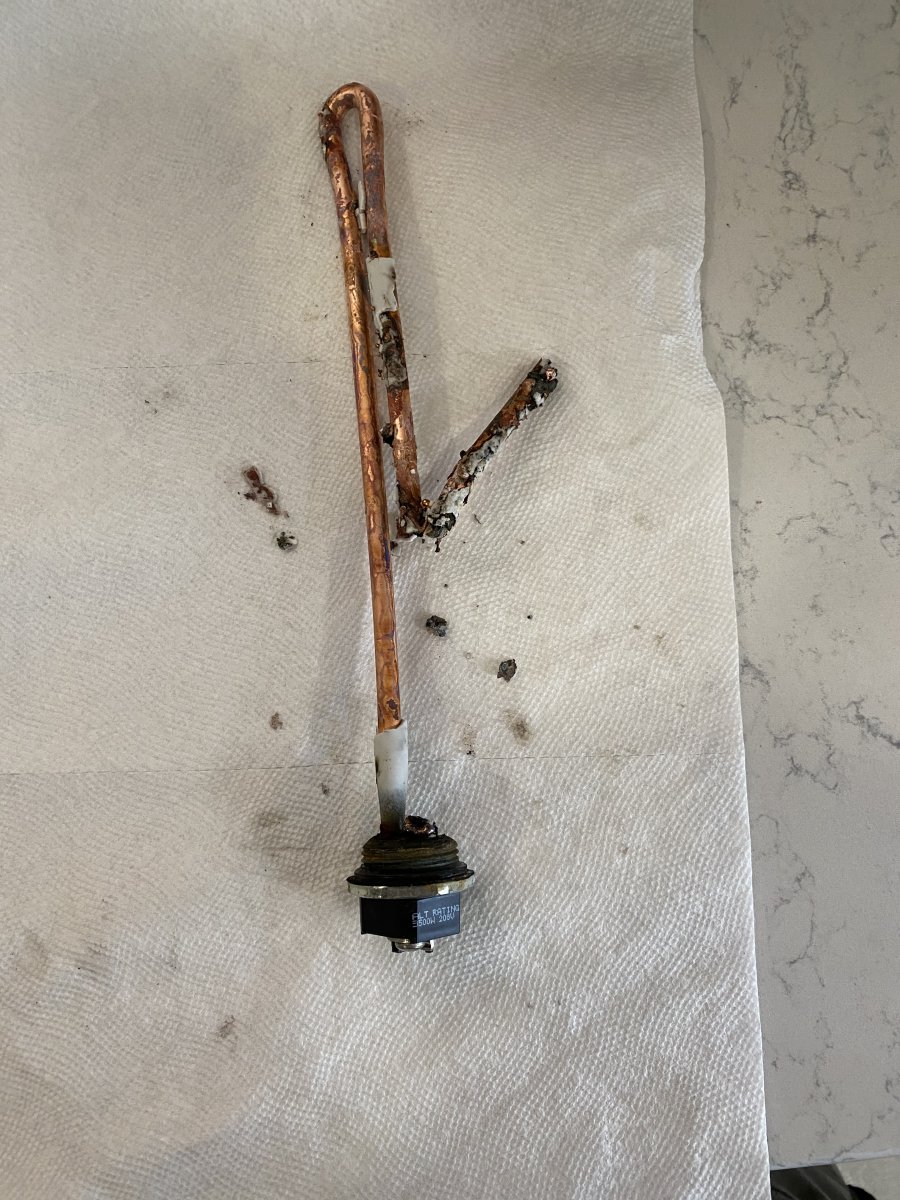 Brakes on the Tahoe. Roughly 40k on the old set. 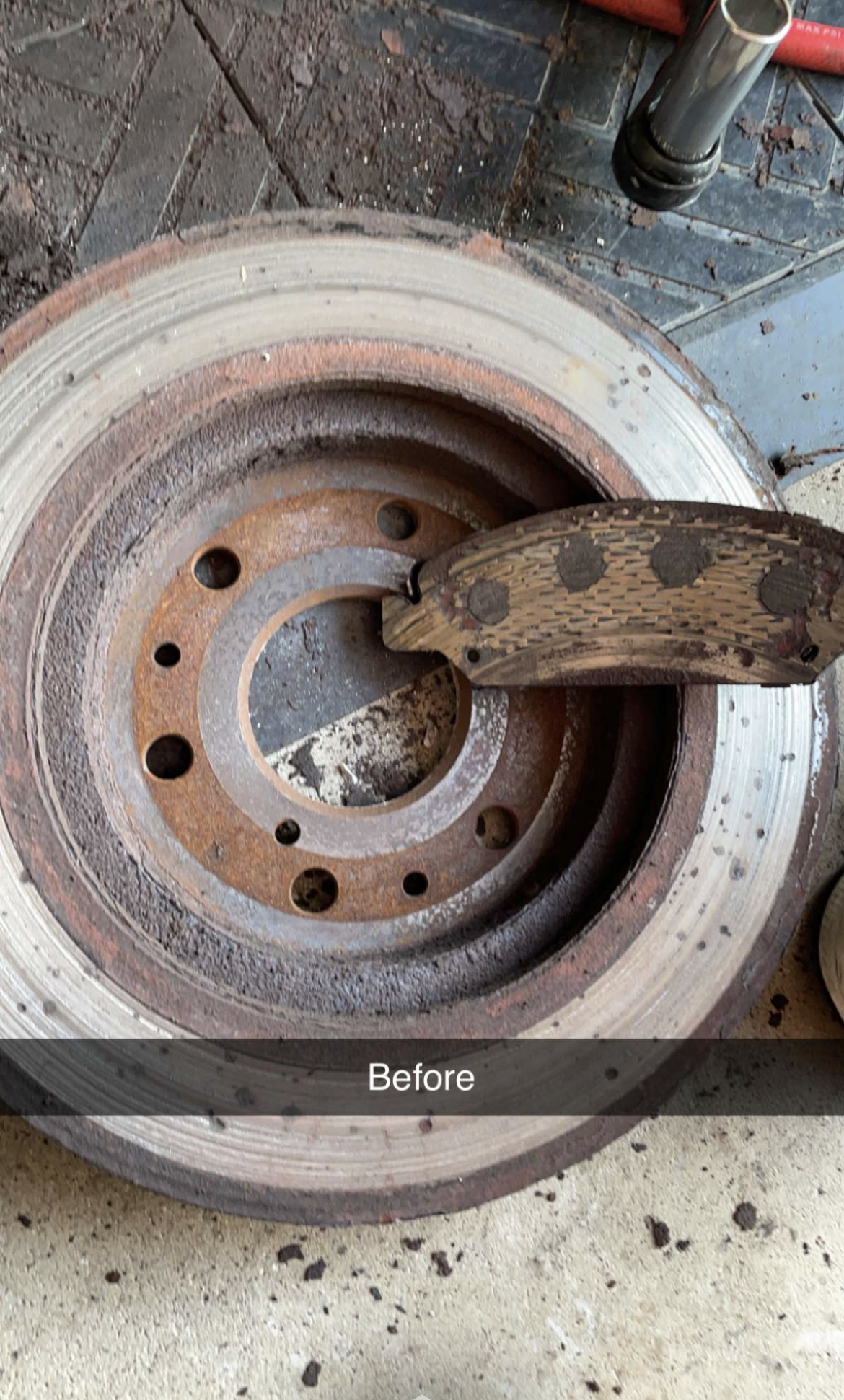 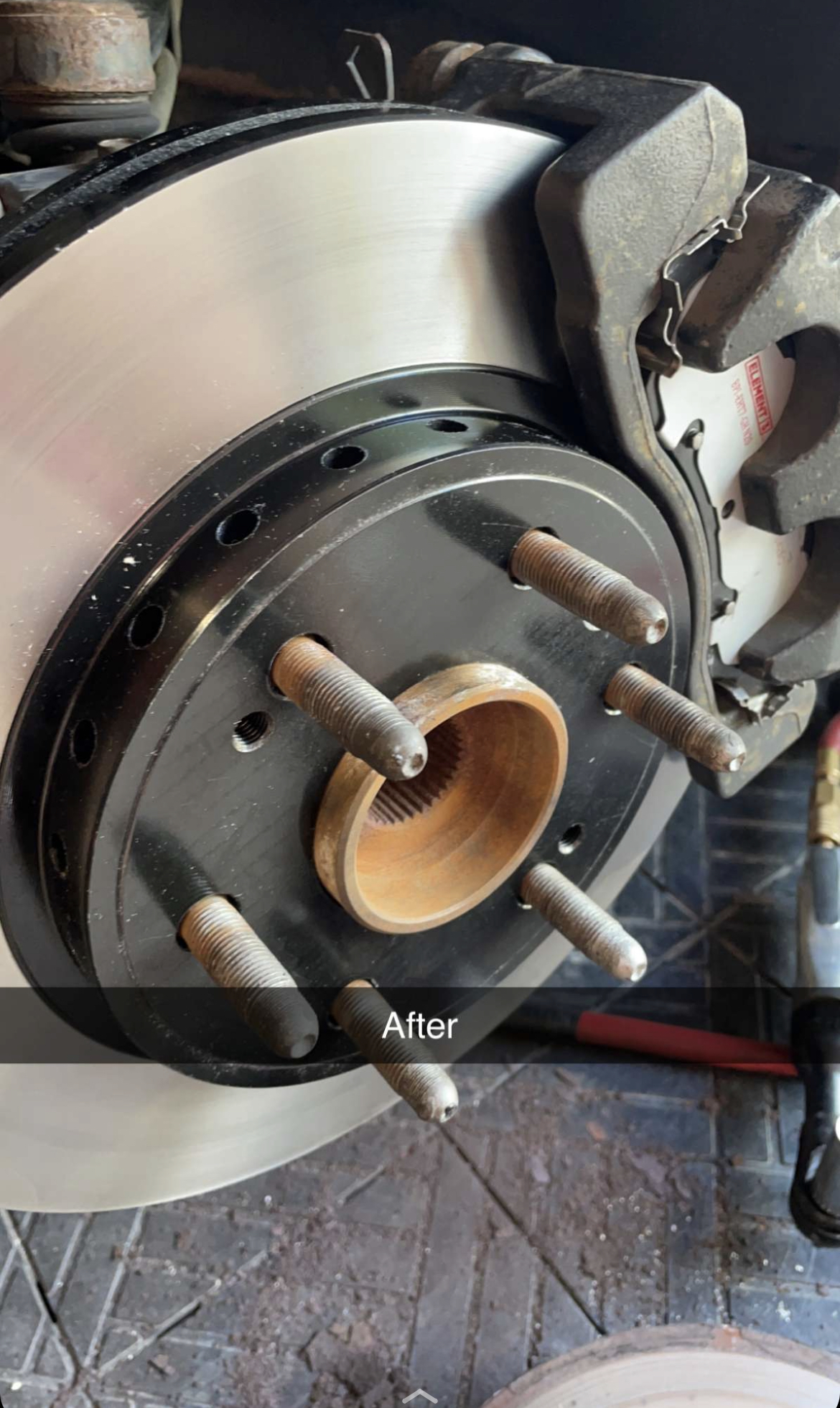 Momma has been dealing with not having AC in her 95k mile 2011 CR-V for a few years now. Since I now have the tools to fix, diagnose, and recharge, I decided recently that we just need to trade cars so that I can do my thing.

Once they left on Sunday with my C30, I went right to diag because I didn't want to be driving this thing to work in the heat either! With a little bit of probing around, I found that the compressor clutch was toast per Honda's TSB. I found a clutch kit on Prime for $35, so this was last night's adventure. 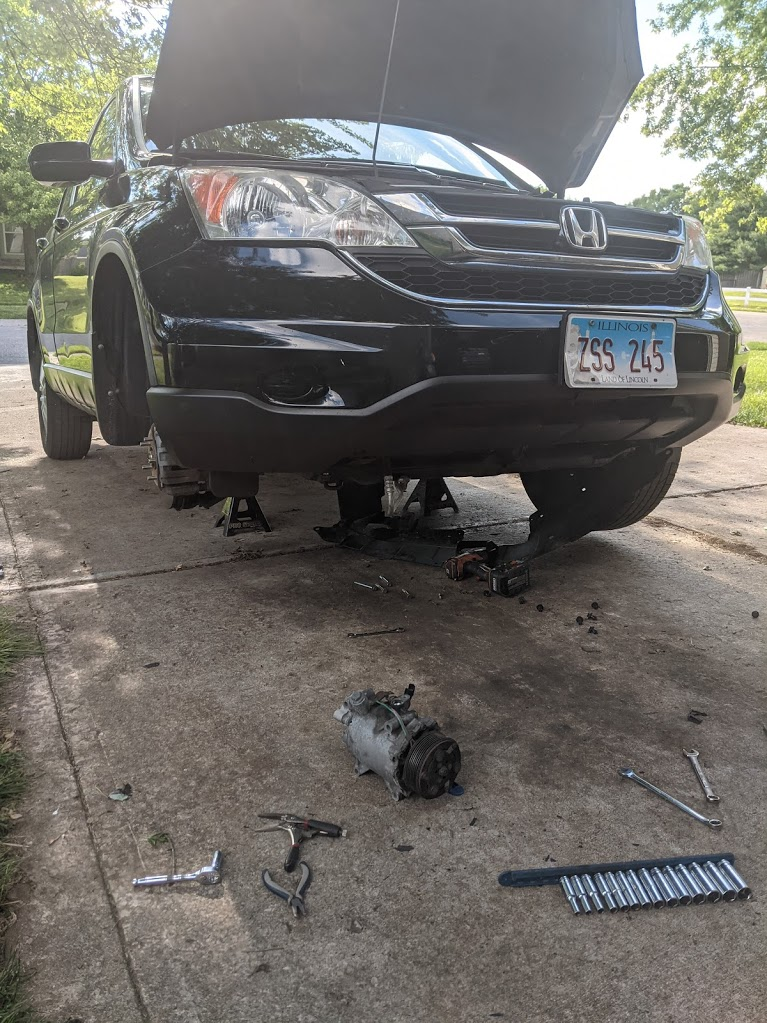 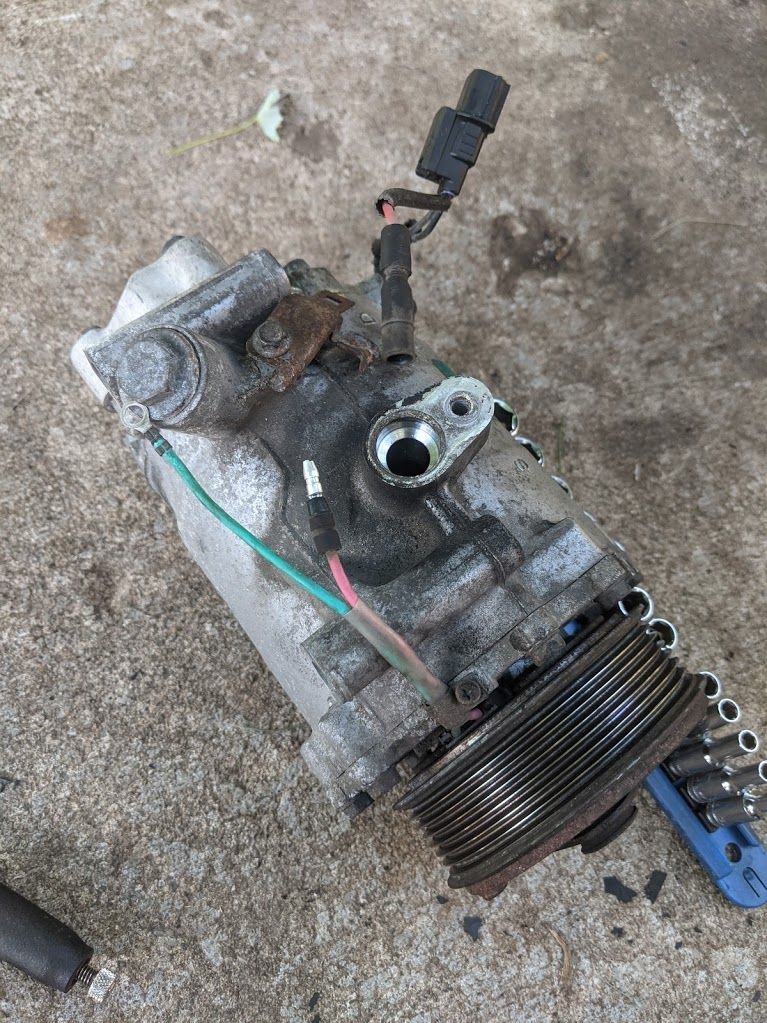 Shiny! I had to do to HF and get their snap ring plier kit though. None of the universal tools I had were up for the job.

Cheap china parts struck me in the form of junk shims. The old clutch only had one shim which was not adequate for the new clutch. However, the new shims in the kit had an ID that was about double the shaft size. WTF. At one point, I thought for sure that I was going to need to toss everything back together with the bad parts, and get a shim kit from Honda. What are the fucking odds that I would find a washer in my stash that not only had a much more favorable ID AND space the clutch out to a perfect .010"? Damn, I'm good. *blows smoking gun* 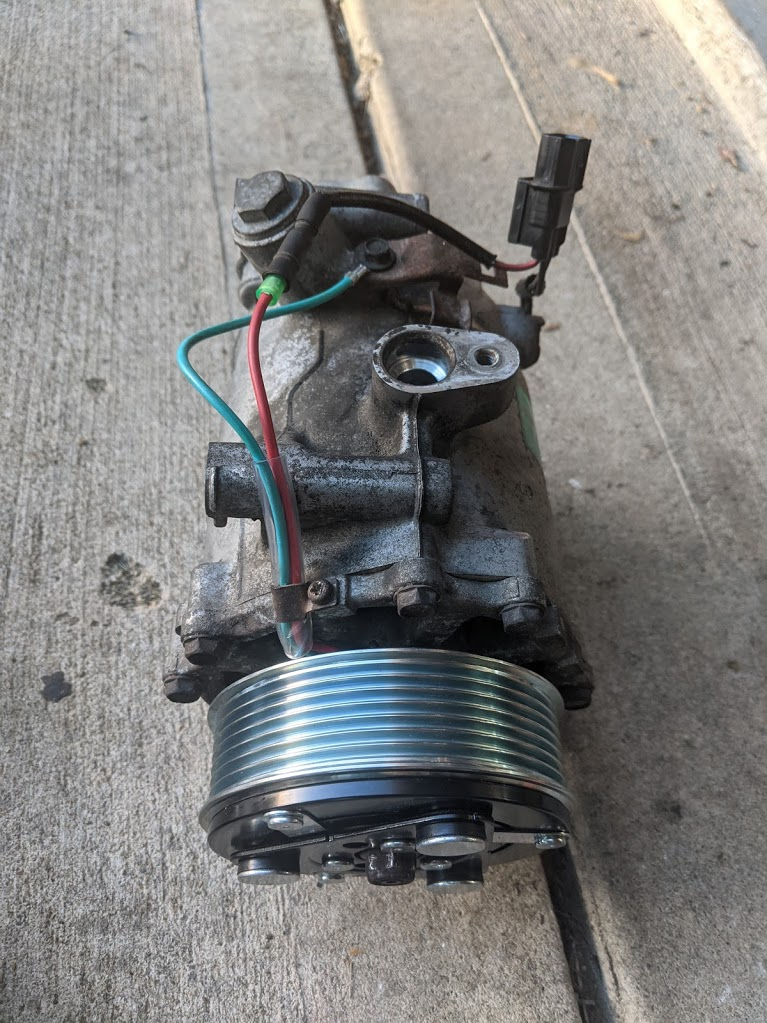 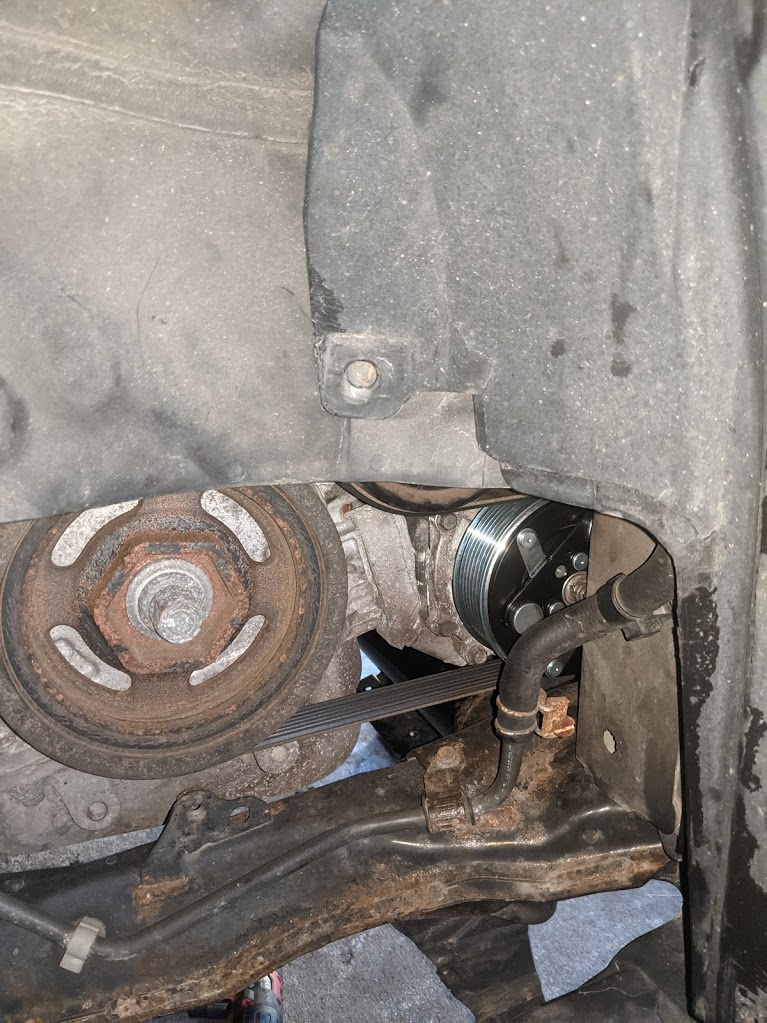 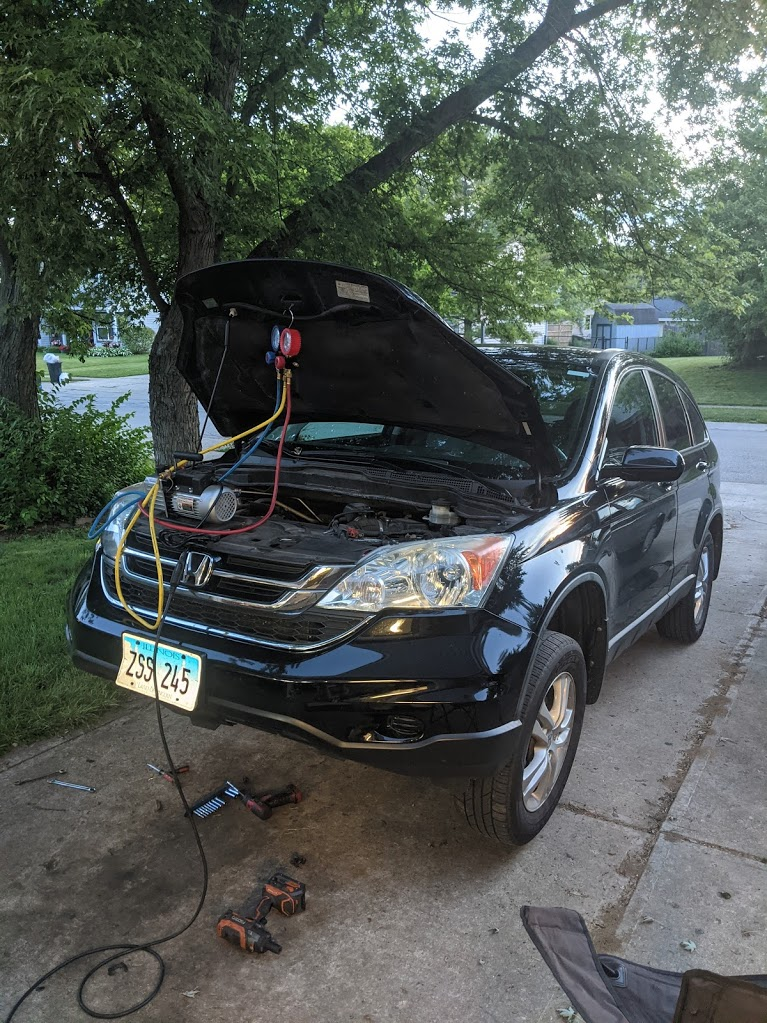 Toward the end, I had been out so long that my motion sensing garage lights even told me it was time for bed. 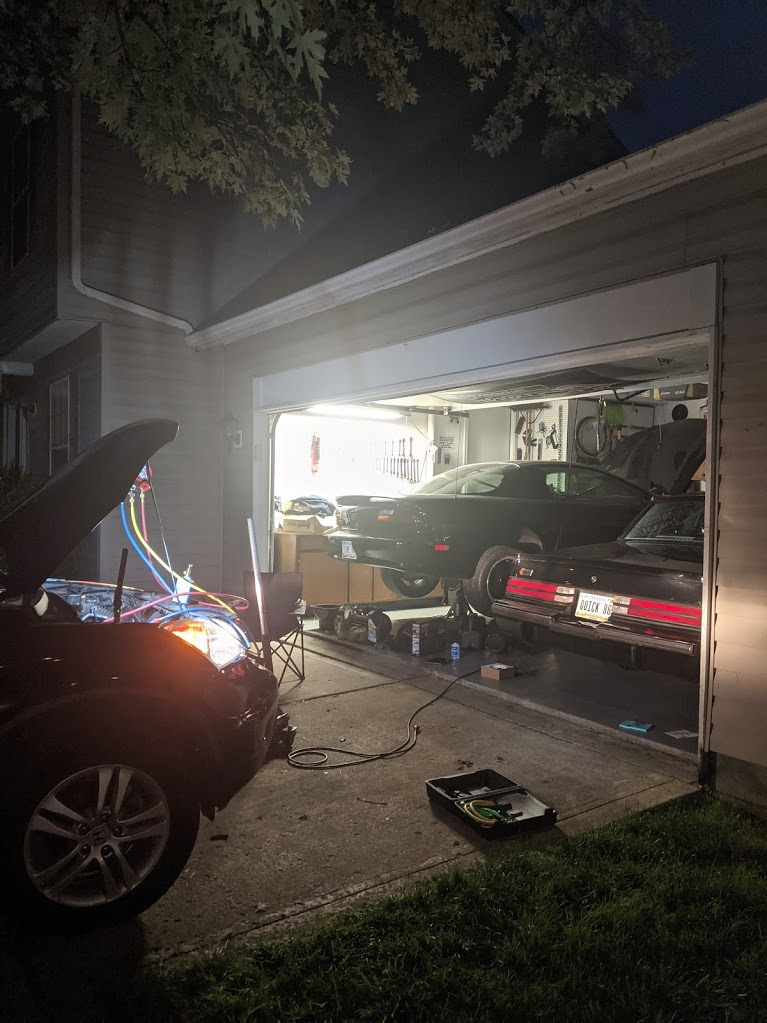 Mom and dad are going to be so happy when they get this car back. They were about to sell it because they wanted something that they could keep at their AZ condo. Obviously a black car with black leather and no AC is not it! $60 later, it's going to work just fine.

From work truck to not plain black. Actually from Sunday. Free truck aint so free anymore. 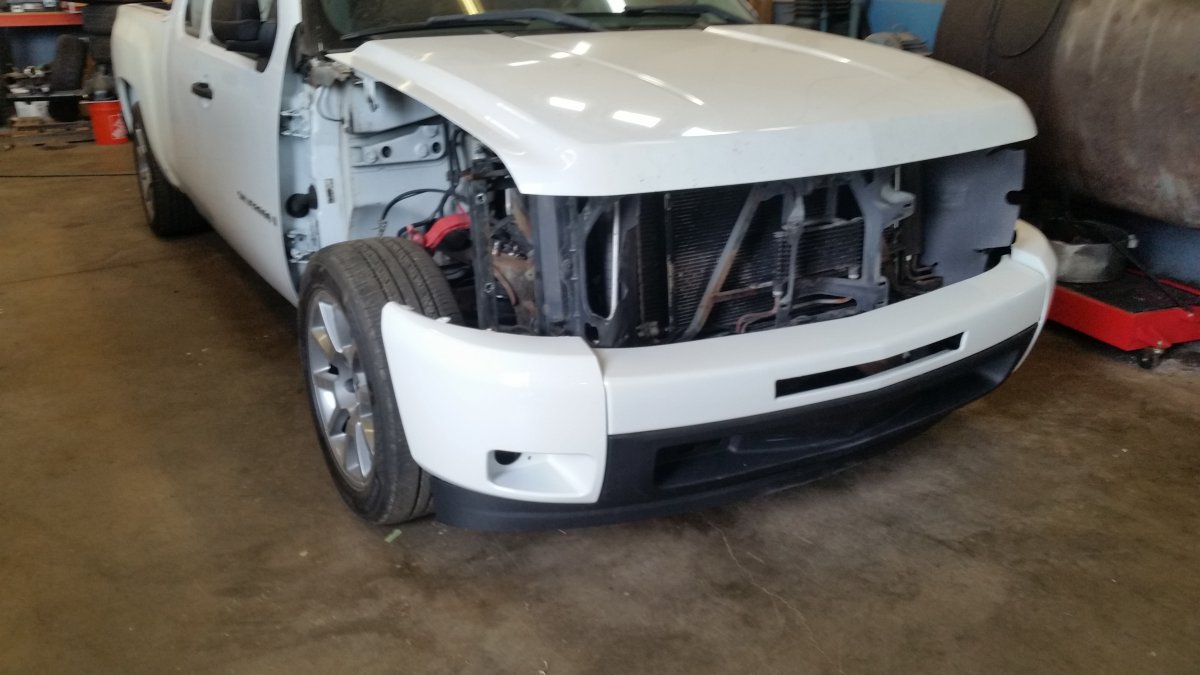 In the Phoenix area every week for the next month or two working on a new project for my company.

When cab mount bolts are so rusted and fragile looking you do this job without jacking the cab, fuckin yuck. 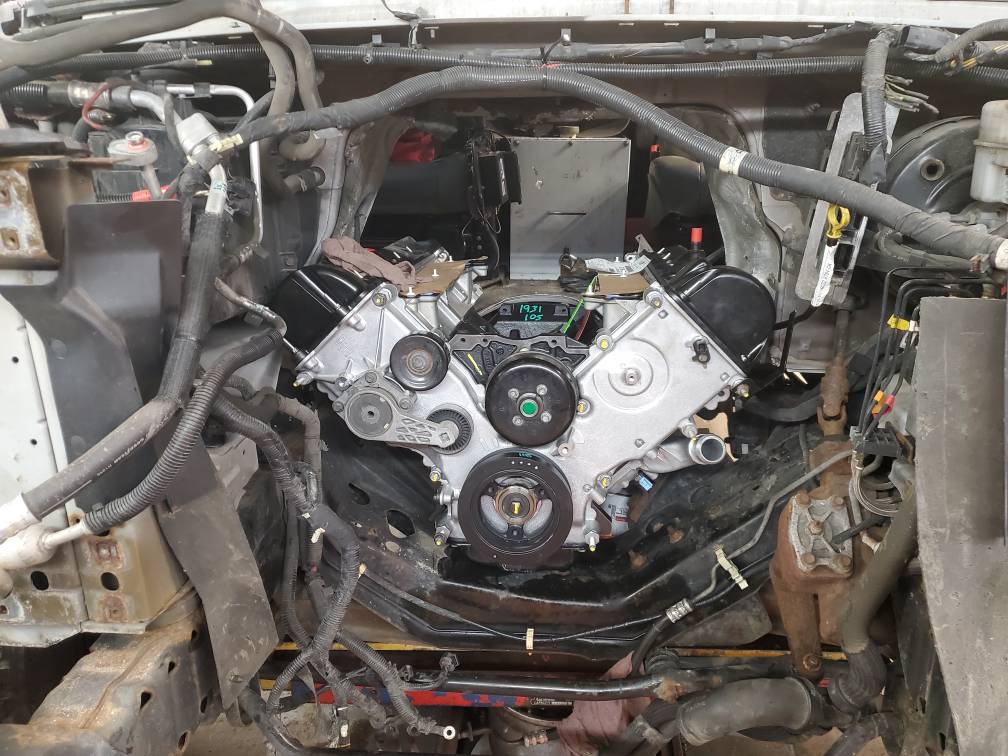 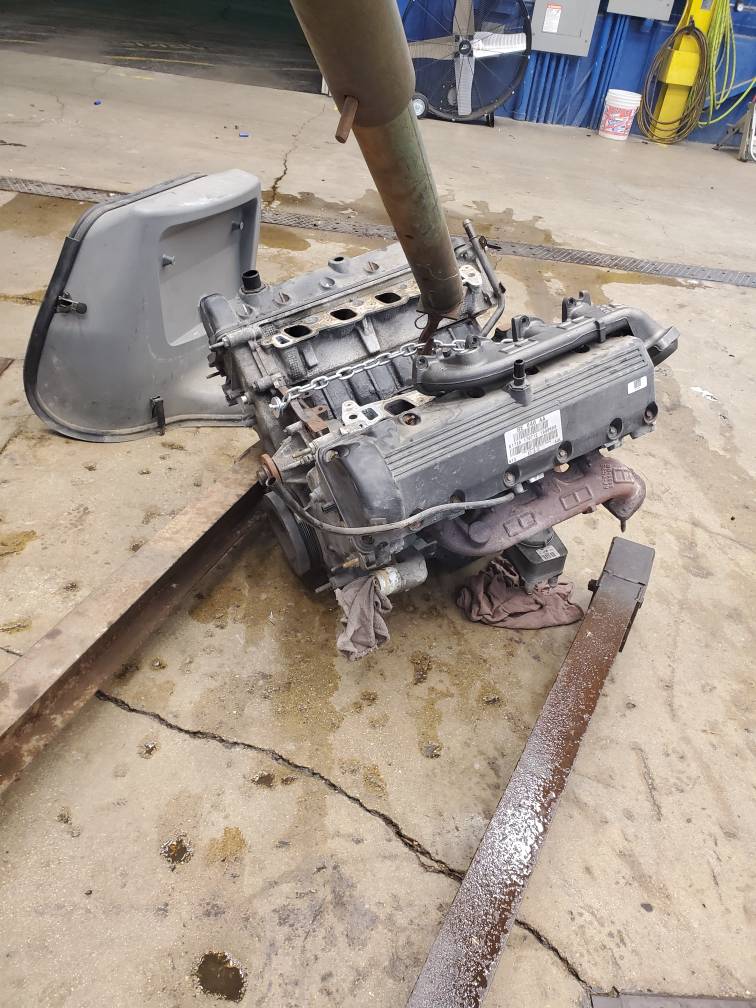 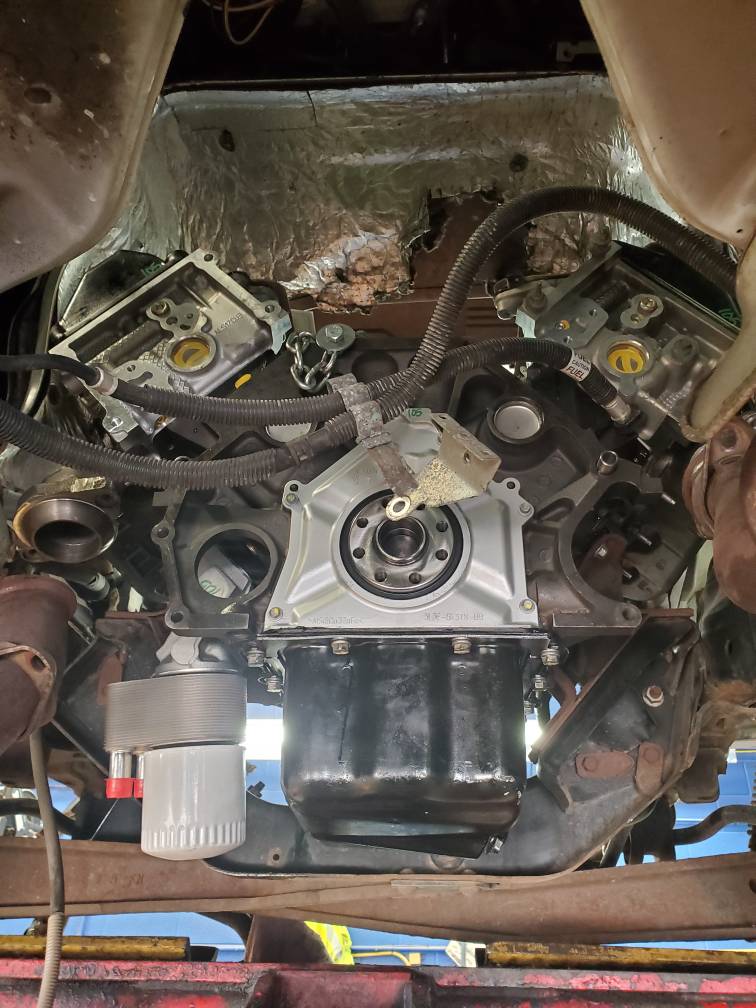 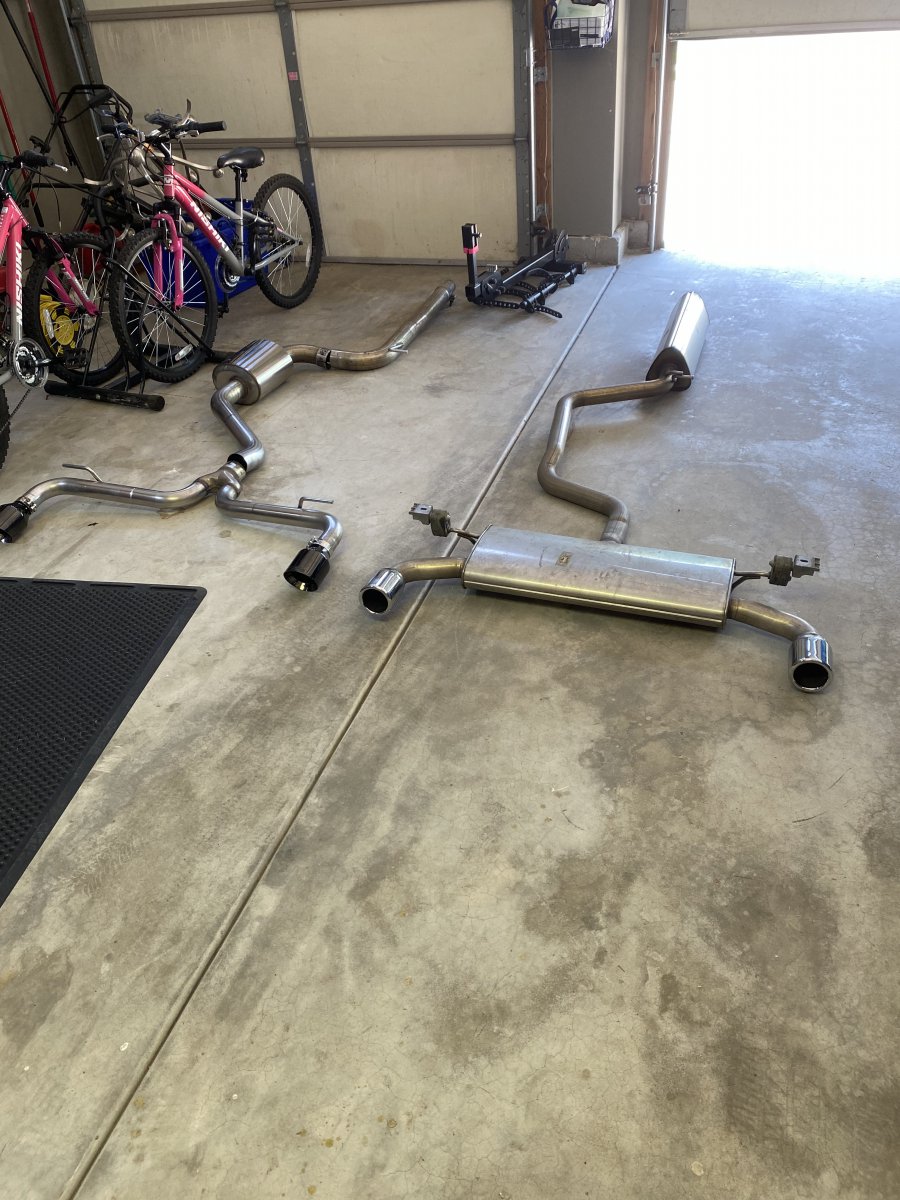 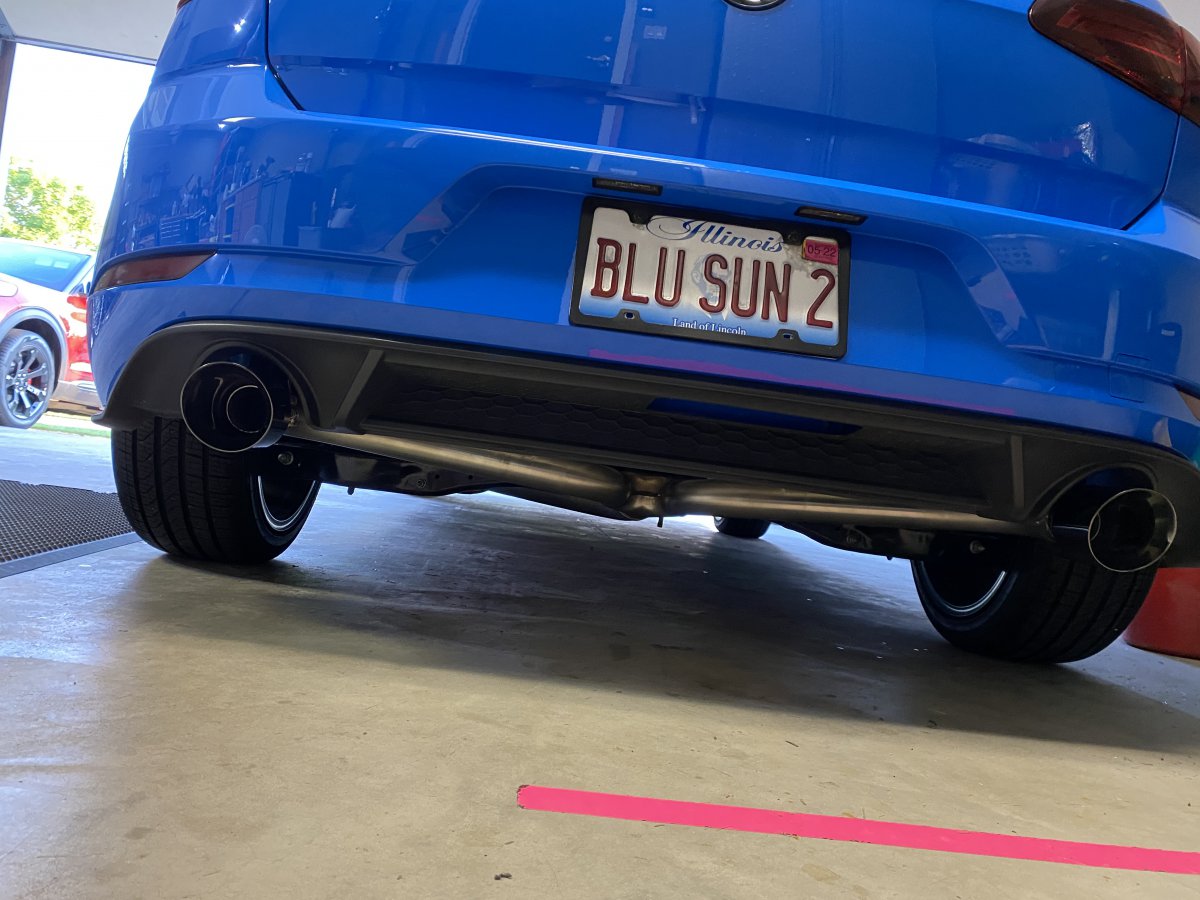 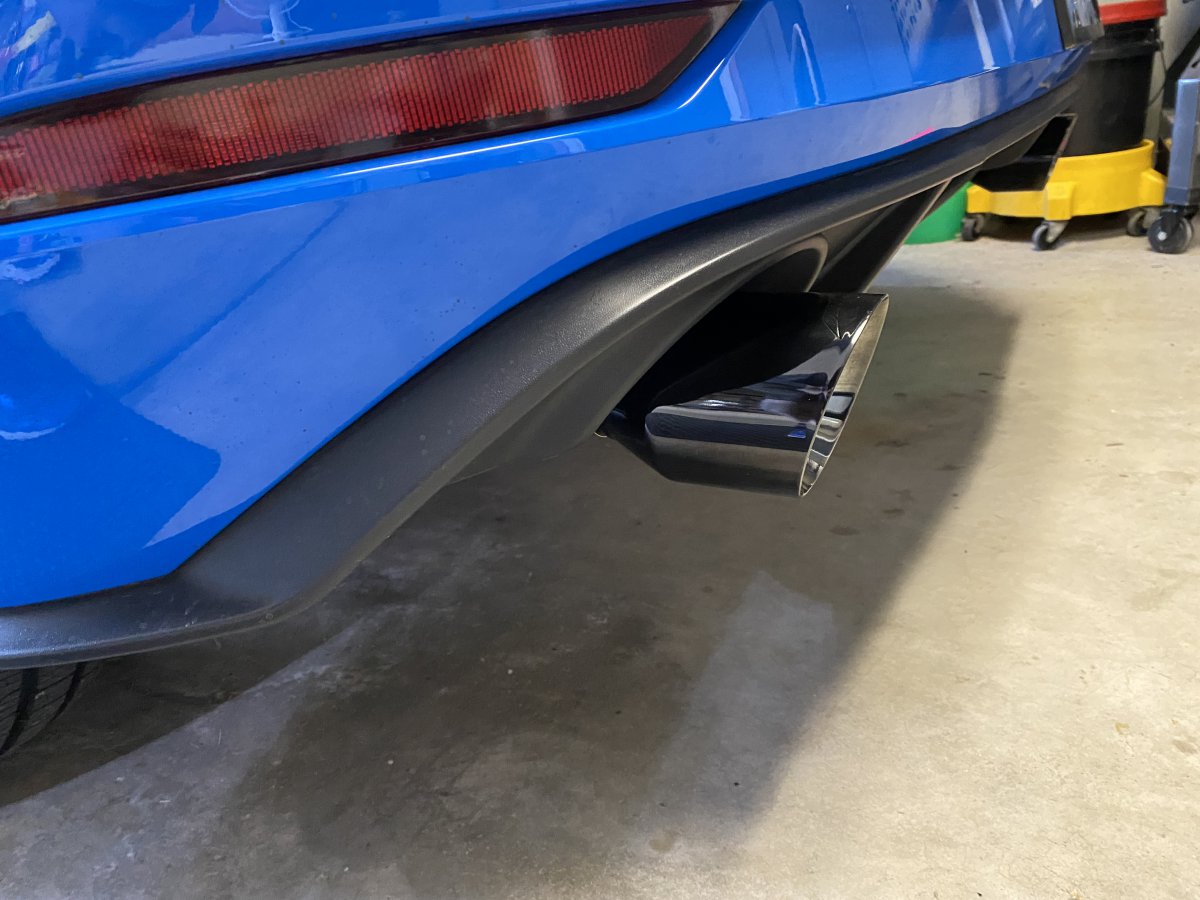