SpeedSpeak2me said:
I’ve made that run a few times. We’ll cross the river and run the road along it back East. There’s a place you can cross with a covered bridge that’s fun to go through. At the end of the road there is a good fish restaurant.

I’d have to pull up a map to get the exact names.

edit: Pine Bluff Rd on the south side. Go north on Will Rd for the covered bridge, which is crossing the Dresden Cooling Lake. The restaurant is where the Des Plaines River ties in, Big Fish Grill.

But somehow I feel you know this already, lol.

Also, we’d take County Road 8000E north, which ends up facing west and becoming Collins Rd, and finishes at the reservoir, then walk around and stretch our legs.
Click to expand...

I've driven that once a few years ago in my car, but looking to check that out again with the bike. Thanks for the reminder!

I feel bad about not getting off my ass and riding today. But it would have put me in bad shape for work tomorrow. I don’t bounce back from heat exposure like I used to.

I was on the road before 9am and back home by around 11:30. I wouldn't have gone out this afternoon...

Well...... I became a bagger bro last week. My Fat Bob sold so I was on the hunt for a new Street Glide Special. Was really torn between a 2019 Industrial Grey Denim or a 2020 River Rock Grey Denim. Decided to go with the 2020. My friend knows the sales manager up at Heritage in Lisle and they had the one I wanted so got a decent deal. I picked it up last week and already have 700 miles on it. Absolutely loving it! Did some Rinehart slip-ons, LED headlight, LED turn signals and brake lights, and have a few other things on the way. 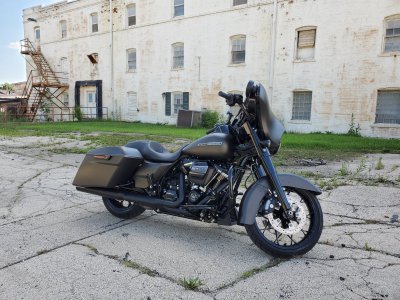 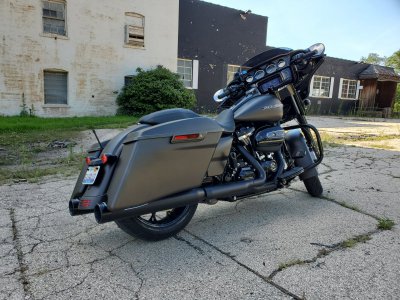 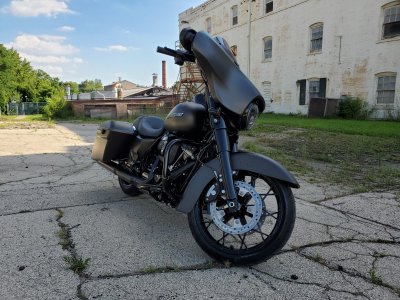 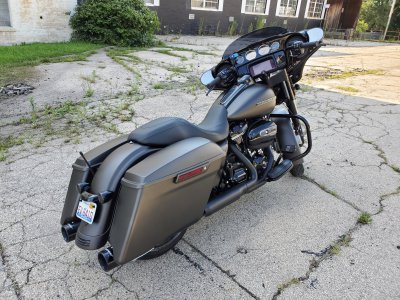 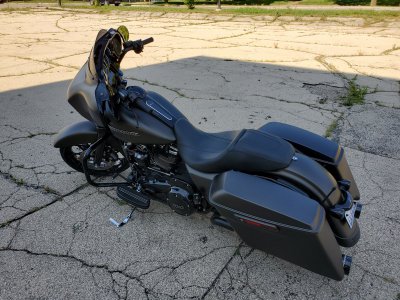 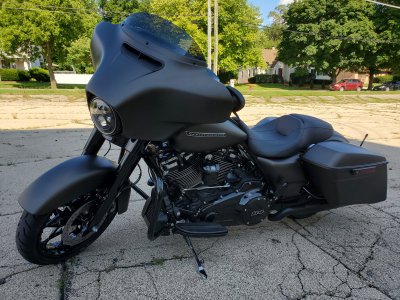 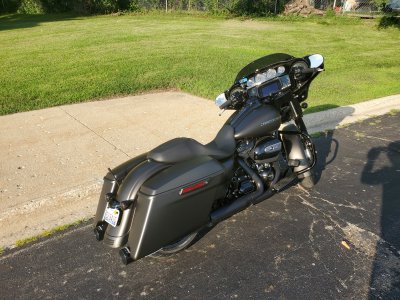 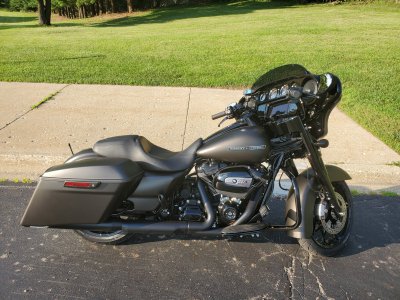 Spivitz said:
You know it's hot if you're sweating while riding

That was it, parked in the morning, never fired it up again yesterday. Brutal heat, stayed in Big Blue

That was it, parked in the morning, never fired it up again yesterday. Brutal heat, stayed in Big Blue
Click to expand...

Aron and I did over 300 miles yesterday with a few other guys. Went out to Poopy's. The heat was pretty brutal but the ride was great!
S

I think you made the right choice! That looks amazing! I'm sure I'll want something comfortable like that in a few years, so when you get bored with it, let us know before you sell it!

I think you made the right choice! That looks amazing! I'm sure I'll want something comfortable like that in a few years, so when you get bored with it, let us know before you sell it!
Click to expand...

Thanks!!! And knowing me you might be the next owner.....lol In all seriousness I plan on keeping this one for a while. Going to put a lot of miles on it..

And I love your new Husky!!! Such a cool bike.

1MEANGT said:
Aron and I did over 300 miles yesterday with a few other guys. Went out to Poopy's. The heat was pretty brutal but the ride was great!
Click to expand...

Take any decent routes or just like 64/52/84? I haven't been out there for a few years, but do have the sweatshirt to prove it!

SpeedSpeak2me said:
Take any decent routes or just like 64/52/84? I haven't been out there for a few years, but do have the sweatshirt to prove it!
Click to expand...

We took 64 out. Hung out in Savanna for a few hours. Then rode up Clay Rd from Savanna to RT 20. Cruised home down 20. Was a good ride, just hot AF. Lots of scenic roads out there.

I've done that one before. However on the first trip through there

RoninAMG and I missed Clay Rd, which turns into 5th street, then Scenic Ridge Rd to run the east side of the Mississippi Palisades State Park. Instead we stayed on 84 all the way into Hanover. Then amongst some mild confusion we went east on Hanover Rd till we hit Derlinda Rd. Realized that ran N/S and would take us along the east side of the park, like we had wanted. When we looked left (north) was saw a nice straight road that got curvy, so we went that way first. When we got to 20 we turned around and came south. We did run the east side of the park, and it was MUCH better going south than north, at least on that day.

Going south I think we passed one other bike, and that was it? Coming north was one parade of RV's, trucks, and cars almost the whole time. Would have been a teeth gnashing ride had we got stuck in that.

We ended up back in Savanna, stopped at Shivers for some food and ice cream. Went back up 84, crossed into IA for a bit on 52, came back to 84 and into Hanover, again. But this time went NW out of town to take Blackjack Rd. Let me tell you, from the map and satellite view, Blackjack Rd looked like a good idea. About 10 minutes into it on a sport bike and sport-tourer, it was not. Beat the shit out of us.

It dumped us back out on to 20 in Galena, so we went into town for a few minutes to relax. Then took Field St/Stagecoach Tr. east out of town to Elizabeth Scales Mound Rd. That was a blast, but you have to watch for local sheriffs. We went hauling through the twisties, turned south on Elizabeth Scales Mound Rd, and stopped on the shoulder about 100' from the intersection. In the time it took us to hop off our bikes and go to take our helmets off a county sheriff went rolling westbound on Stagecoach. Had we started off just a minute or two later he'd have nailed our nuts to a hickory tree due to the speeds we were carrying.

Once we reached that point we realized we were way the fuck from home with no good way back (fast road where we could hold triple-digit speeds). Ended up taking ESCM road south to 20, then 20 east to 78. 78 south through Mt. Carroll then caught 40 back east/south all the way into Rock Falls where we caught 88 and headed back. Some of that road was recently paved and was billiard table smooth and radii on some of the curves were perfect. Speed limit on the curves said like 40 or 45 and at 70 it felt like you could get off and walk them.

Once we got to Sterling/Rock Falls we gassed up, got ready then jumped on 88 to blitz back. Well, it was more of a blitz than a waltz, but still kept a low profile.

IIRC I used SportsTrackLive to track where we went. I think I still have it logged.

Here is the overview: 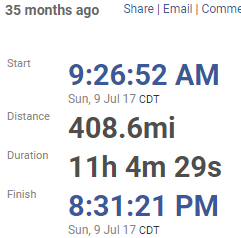 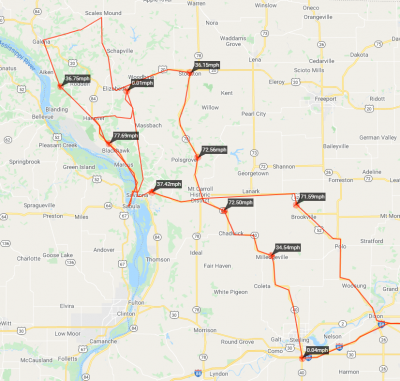 You can see with the dual lines where we rode the same road twice, even where we stopped for gas and then lunch. 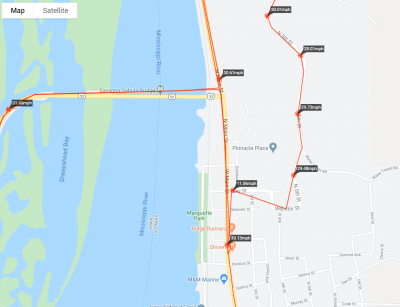 Some of those roads out there were nice to run, but man, when it takes 2+ hours just to get to them it makes for a loooooong day.

1MEANGT ! Dont kid yourself though, you'll be posting about trading this one in on your new bitch this time next year.

No kidding was it hot. I sucked my 100oz Camelbak dry and refilled it, and still only pissed once all day. I've never emptied it on the road, even the first year at Dragon where it was near 100 in the mountains. I would have been dead without the Camelbak on, but it was still a good ride.

Anyone have a destination in mind they were thinking about for this weekend? Saturday looks like it's going to be really good for riding, 84° and mostly sunny.

SpeedSpeak2me said:
Anyone have a destination in mind they were thinking about for this weekend? Saturday looks like it's going to be really good for riding, 84° and mostly sunny.
Click to expand...

I unfortunately have a family wedding to attend. Pretty much screws my entire weekend......ugh.

1MEANGT said:
I unfortunately have a family wedding to attend. Pretty much screws my entire weekend......ugh.
Click to expand... 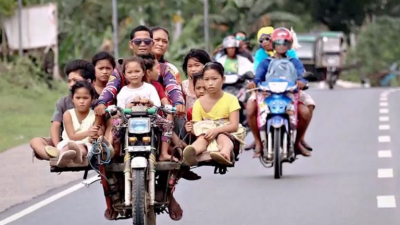 I'm heading to Springfield on Saturday morning to drop the Svartpilen off at Halls Cycles for the first service now that I'm over 600 miles. Just towing it down 55 though. Meanwhile, I took some photos around the industrial canal area in Romeoville tonight while exploring off the beaten path. The Pirelli Rally tires inspire confidence on dirt and gravel, but wouldn't be good in wet mud. 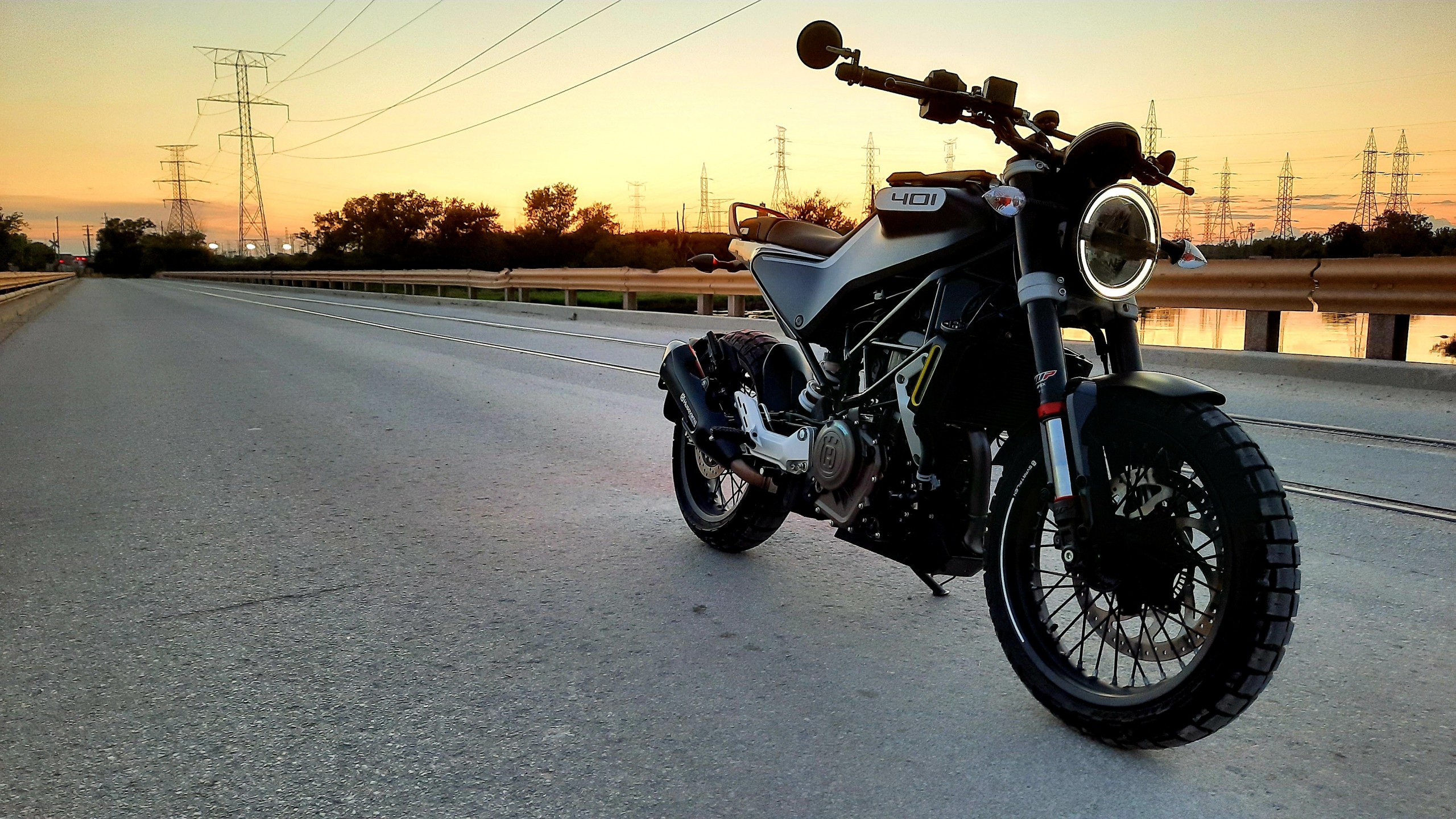 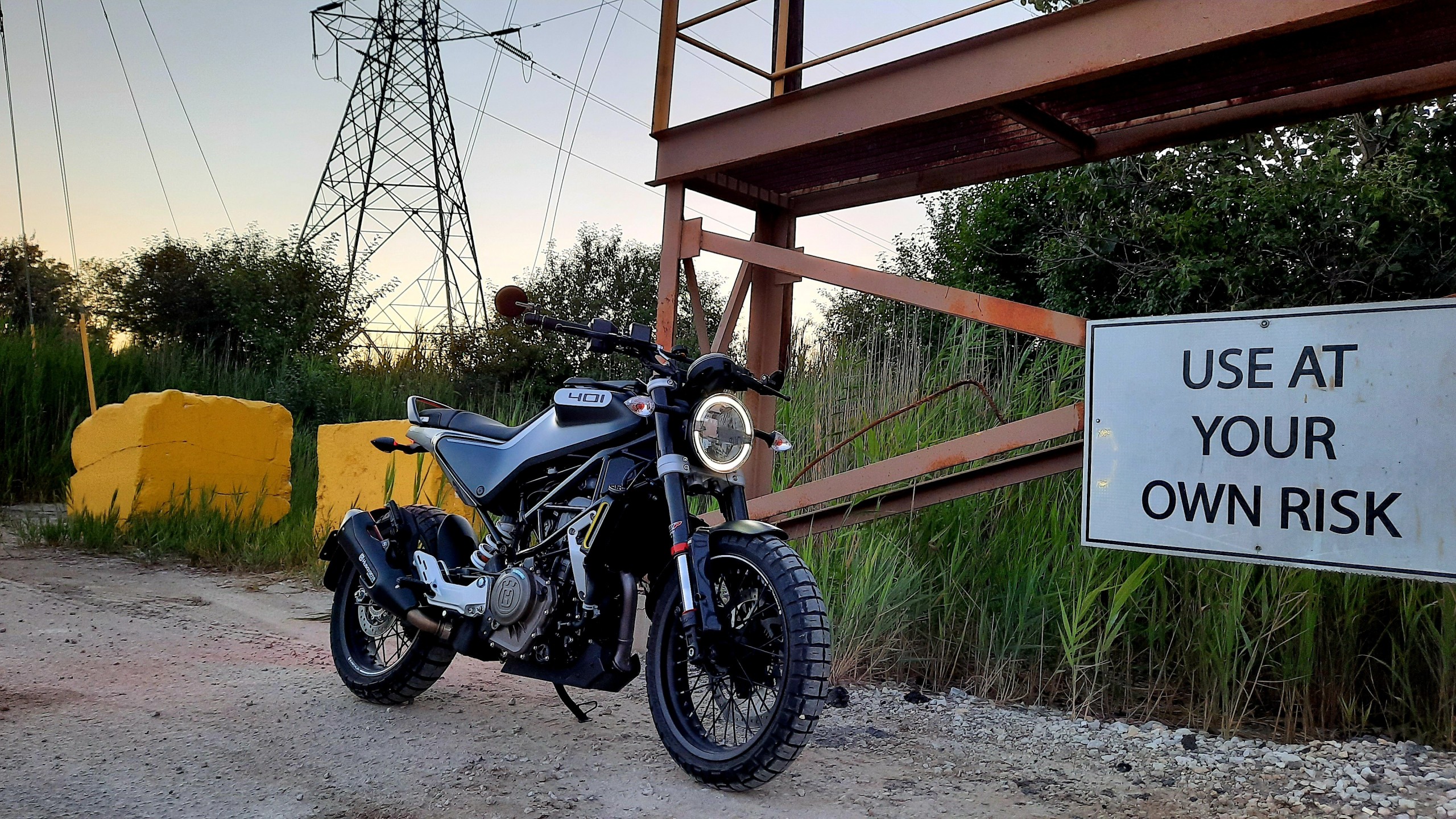 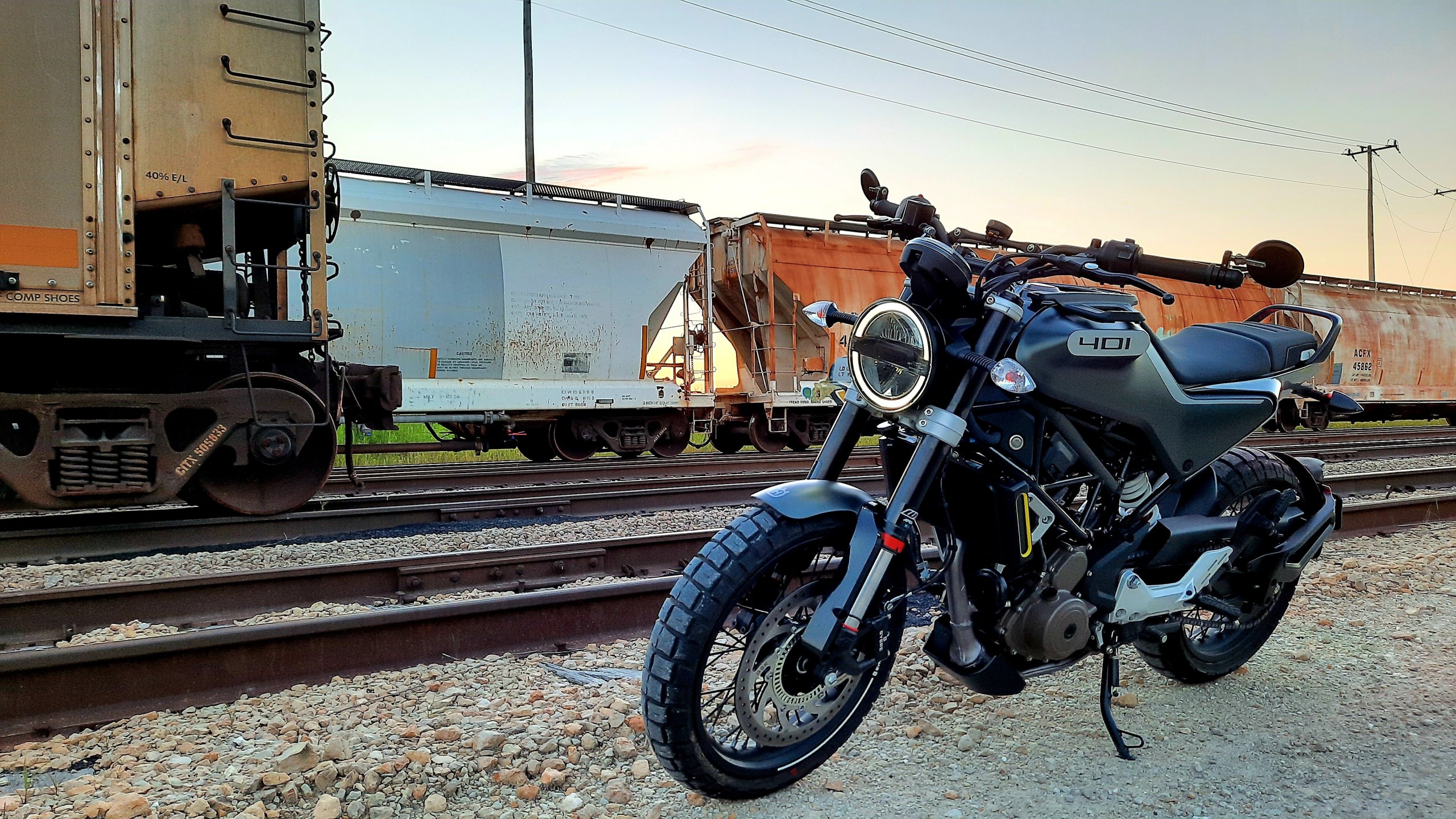 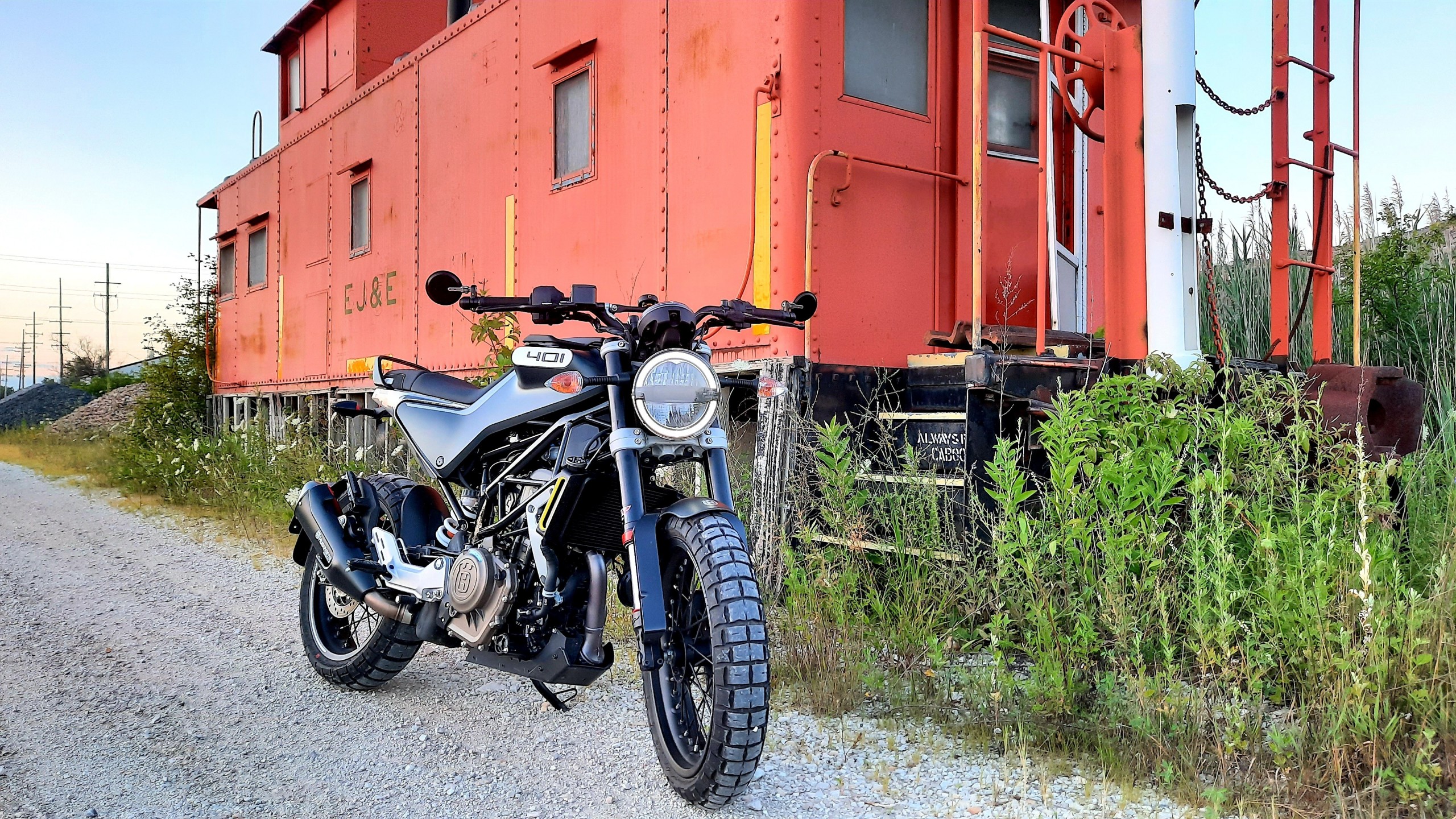 I was all set to go riding all day, been looking forward to it all week. Weather forecast from last night was all good. Wake up this morning, about to leave, friends tell me it is raining by them. Wtf? Look at radar and forecast. Fuck! 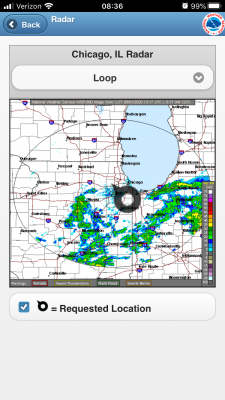 Nice day to ride. Too bad it’s not the weekend 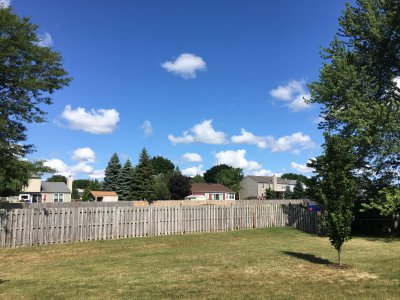 SpeedSpeak2me said:
Nice day to ride. Too bad it’s not the weekend

Definitely thinking of taking the bike out on lunch to go run some errands lol.