MEATeorite said:
How did the brisket turn out? Definitely a nice smoke ring and doesnt look dry.
Click to expand...

Smoke flavor non existent but I'm used to that now with a pellet smoker.

I did not follow your write to a T but I have it saved and will next time.

My butcher paper didn't come up so I had to fool and it ruined the bark.

Pork was better cause I never wrapped it.

crooks said:
What did the brisket weigh? That's a full one?
Click to expand...

I think I mentioned, I gave my old pit barrel to my nephew as he likes to cook. He did a big ass turkey for Thanksgiving and he said it came out very good.
He texts me Friday night asking for tips on doing a brisket. I ask how big, he tells me 18lbs and that he is smoking it for 10-12 people (Christmas dinner).
Gave him some tips and told him he better have a backup plan as I wouldnt recommend trying a brisket that big for his first time especially being for Christmas dinner. He started it at midnight and it was done at noon. Wrapped in a towel and placed in a cooler for 4hrs. He said part of it was juicy and good but the other part was dry and kinda shitty. I'm assuming he meant the flat and the point.
Reactions: crooks and SleeperLS
•••

Here are some late Christmas pics. Sous vide and then smoked ribs were a big hit. Prime rib leftovers ended up being used for stroganoff the next day. Damned good stroganoff. LOL 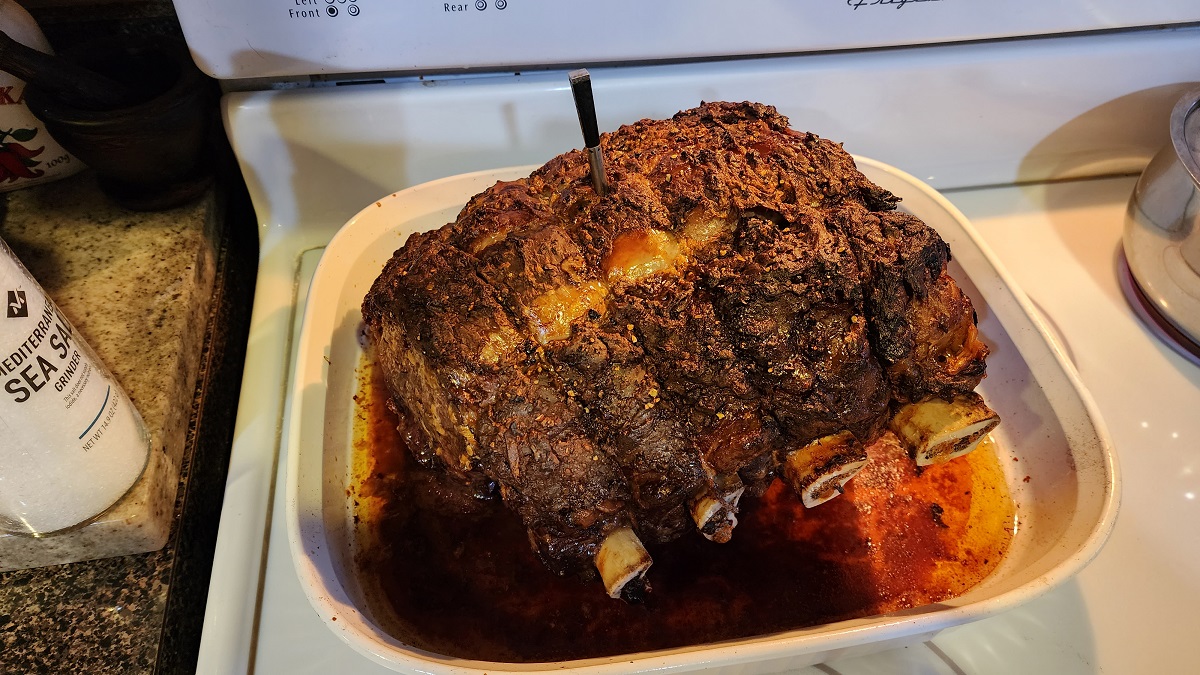 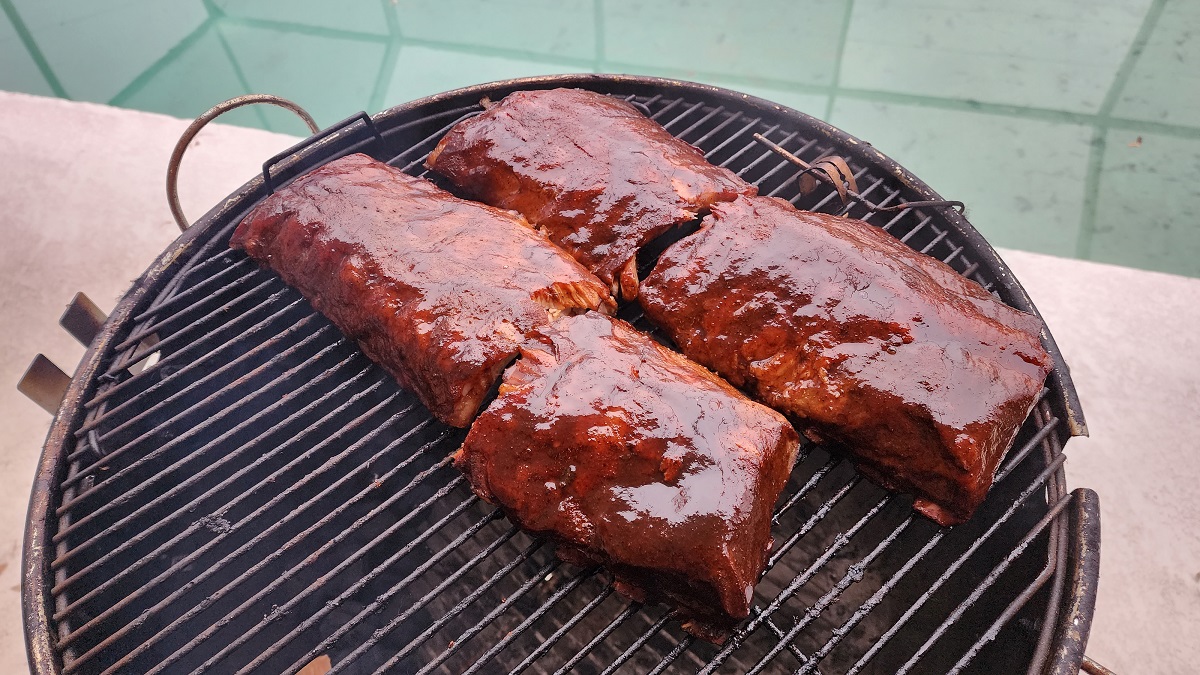 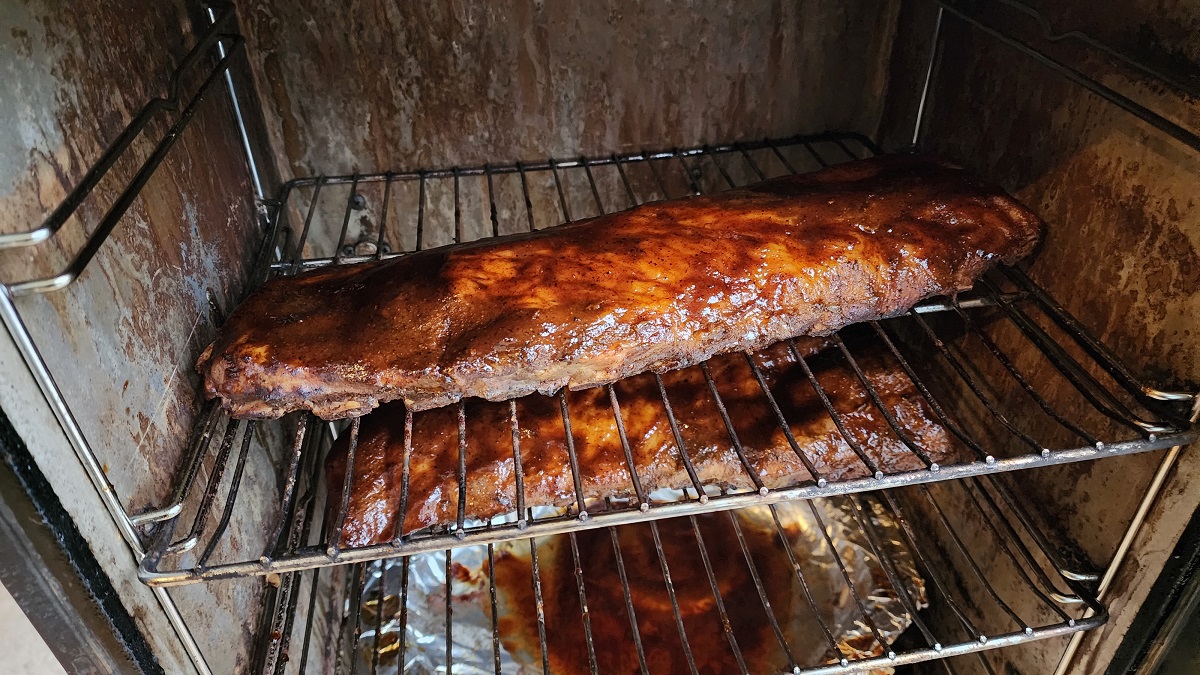 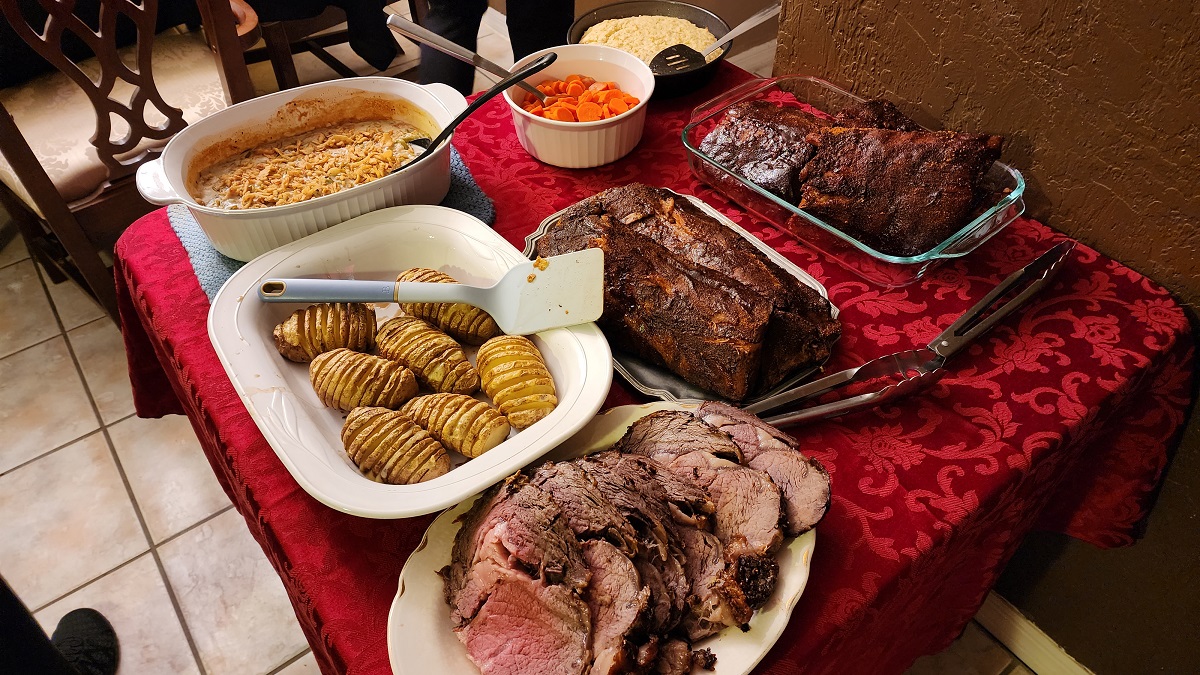 My impressions using WSM with no water pan:

Used a stick of applewood as barrier to bank coals. For cooking i used a chunk of mesquite and chunk of Almond wood. Maintained 250 dome temp, rotating grate every half hour. No wrap. Lots of damper adjustments and high maintenance. Sauced both sides last 20 min. Pic 3 is post sauced.

I really liked the texture of the bark. There was a crunch, like an unwrapped pork butt. Reminds me of backyard rib done over a weber kettle, by an unattentive and drunk uncle, but much better. Myself at fault here, but doneness was kind of a mess, crunchy bark but fat not rendered as much as i normally nail on WSM with waterpan. Doesnt taste like it was delicately cooked.

Very flavorful. I wouldnt have guessed it was a sauced rib while eating it. I didnt get any "grill" flavor by not using a water pan, but it was competing with a lot of flavors. I still think if grilled flavor were there, i didnt pick it up. I think the real difference here was texture, which was a neutral to negative to me vs. With a waterpan. I liked the crust, but the fat render wasnt as good. It was done at 4.5 hrs, so i dont think they got done in any kind of more expedient way than with a water pan. Maybe a rest wouldve helped.

Different, not bad, but not better IMO.

A PSA here, but Mesquite on pork is awesome. On WSM i only use one chunk, but i really love flavor. 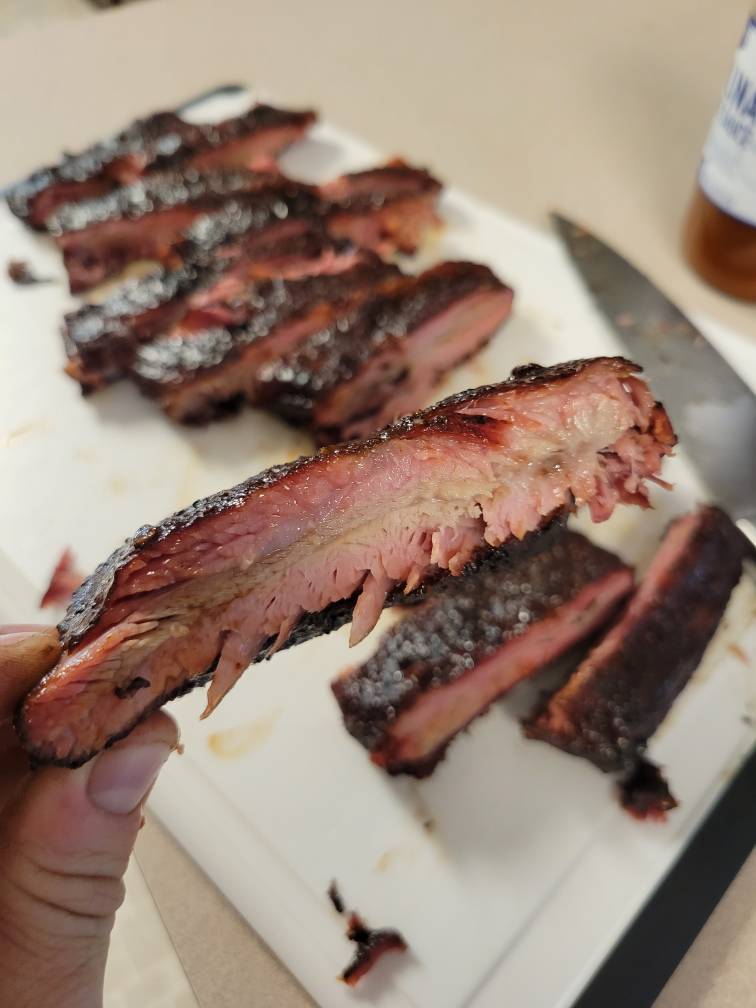 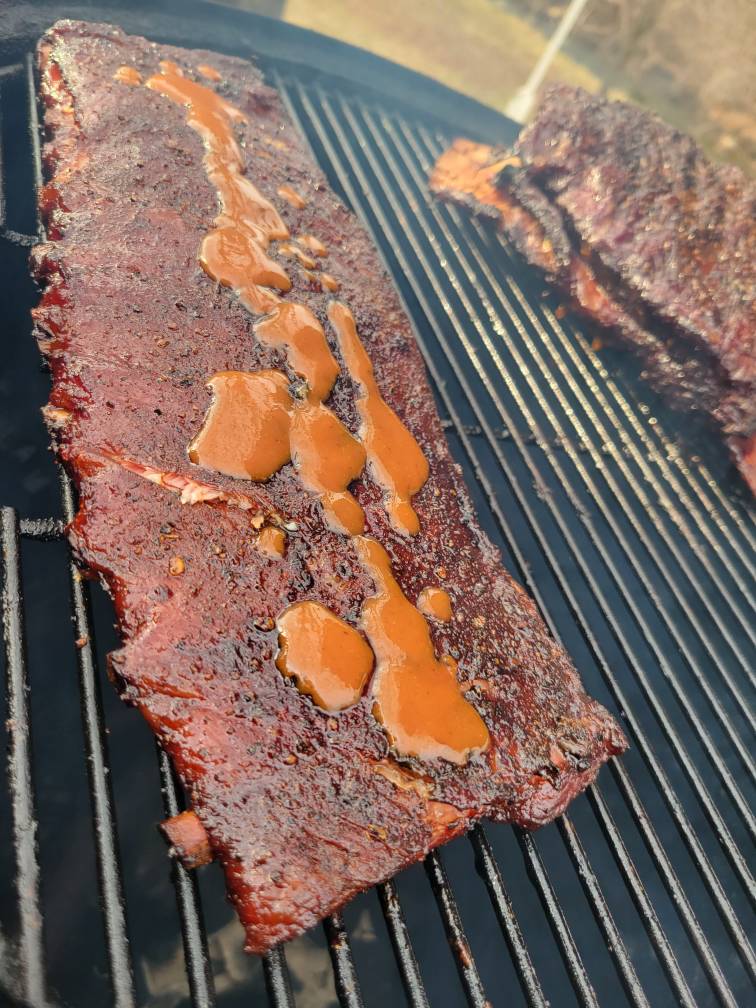 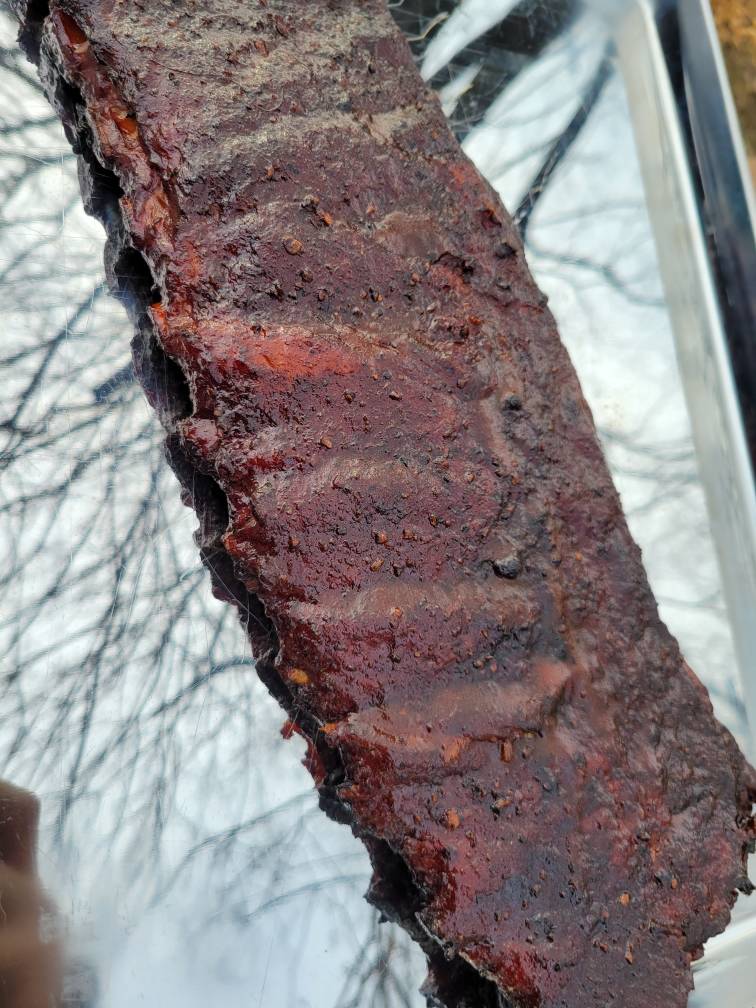 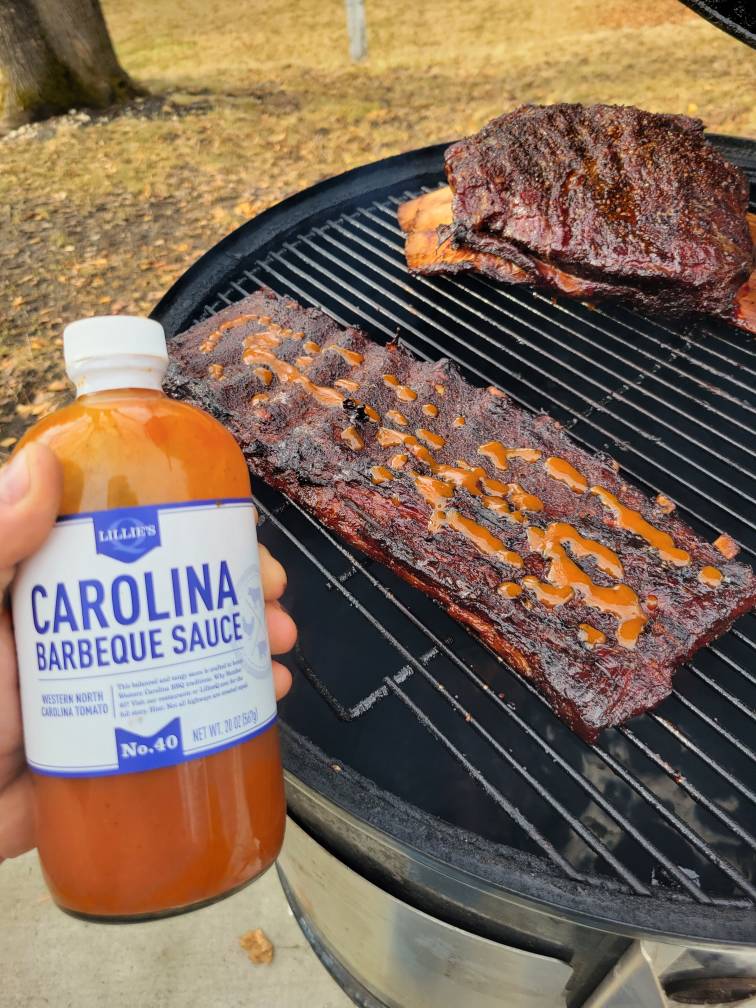 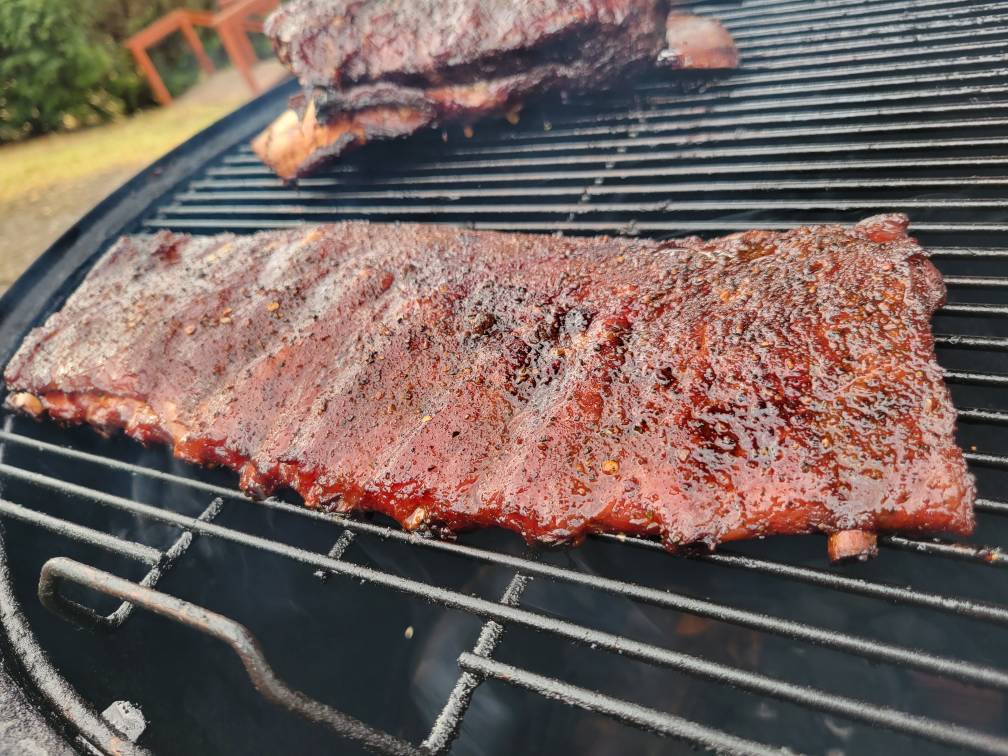 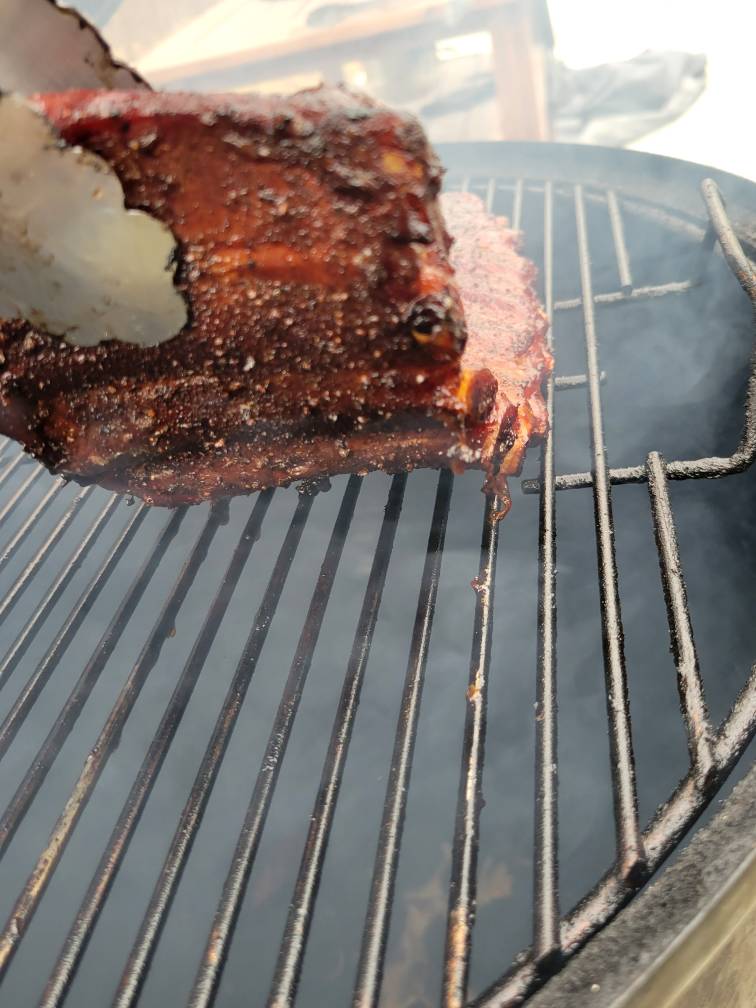 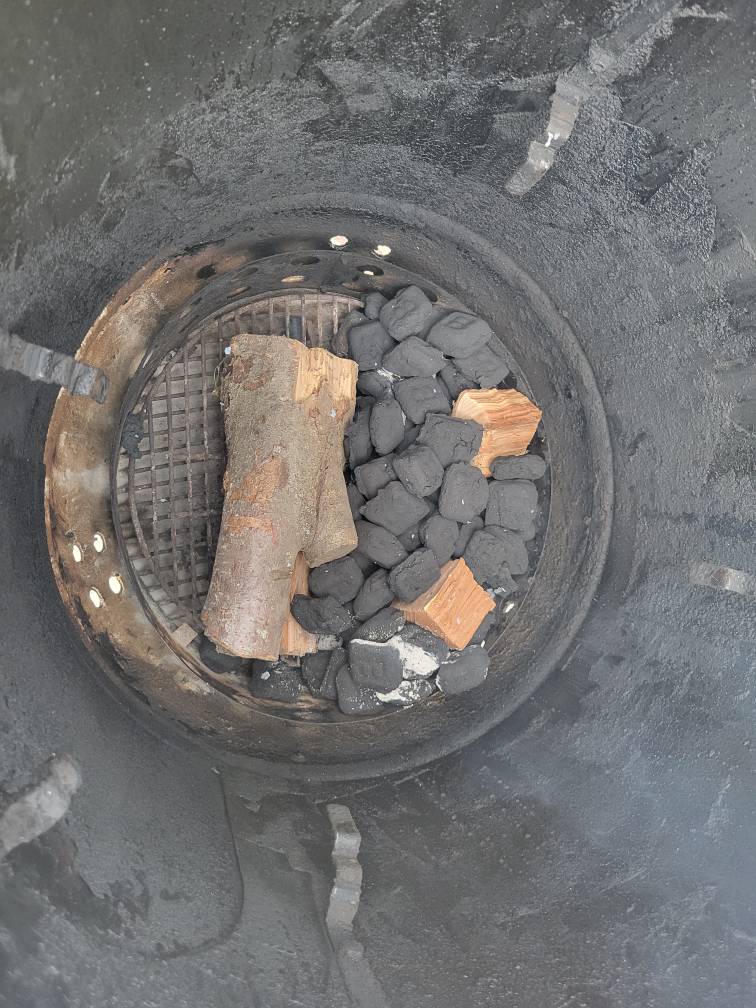 Do you always use liquid in your pan. I only did while cooking brisket.
•••

crooks said:
Do you always use liquid in your pan. I only did while cooking brisket.
Click to expand...

This cook above was with no water tray in place at all. Directly over coals. Only indirect was offset the banked coals.

Normally, same as you. Filled water pan just for brisket on WSM. WSM is really easy, stable, and predictable with temp control. I sometimes dont add water if a brisket is north of 13 lbs.
••• 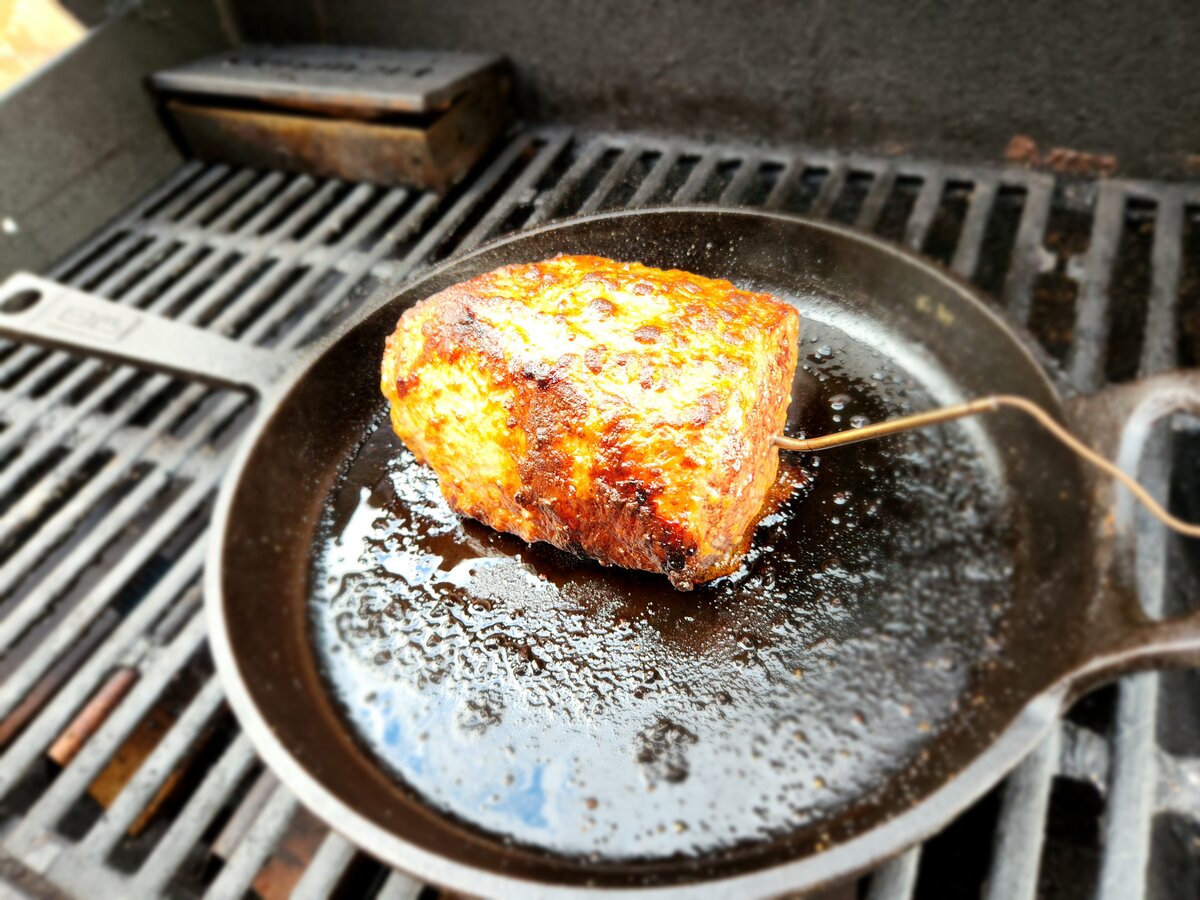 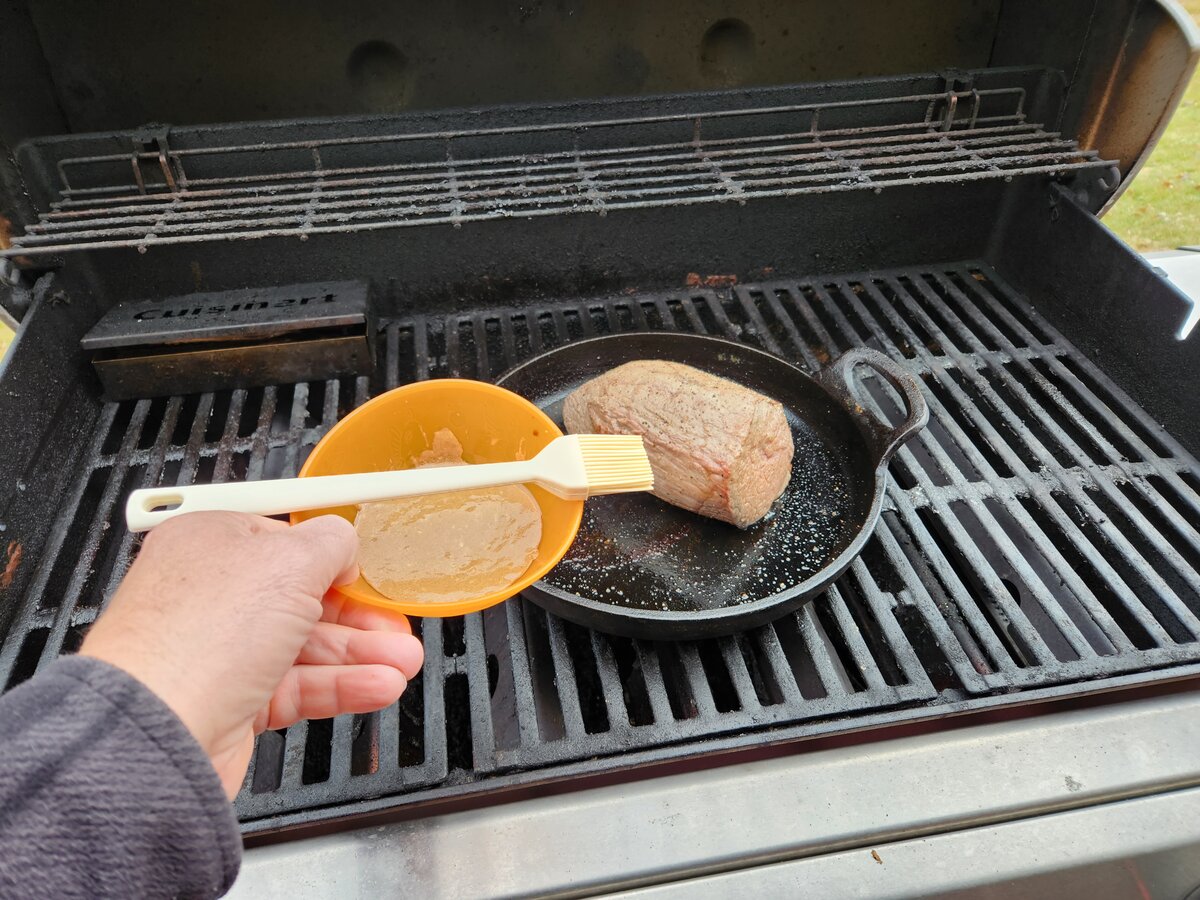 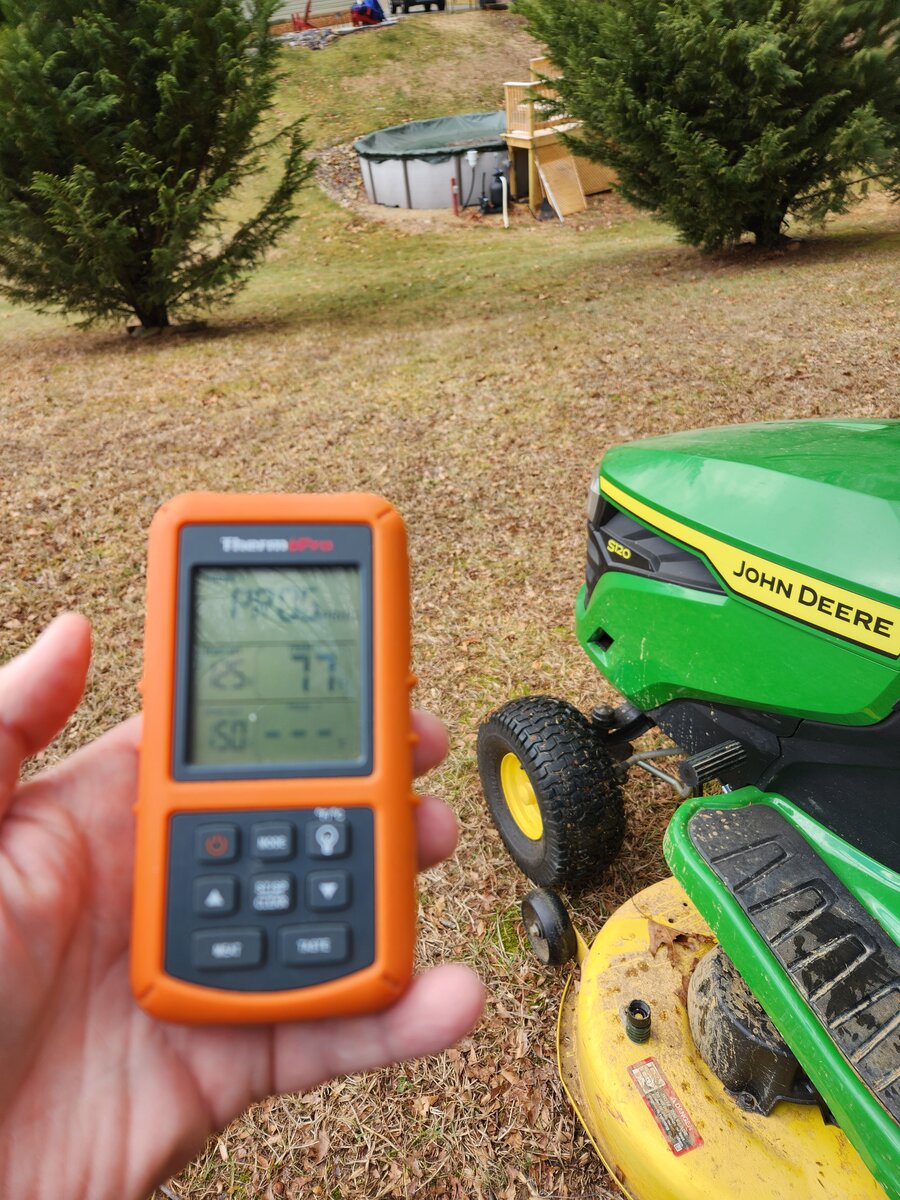 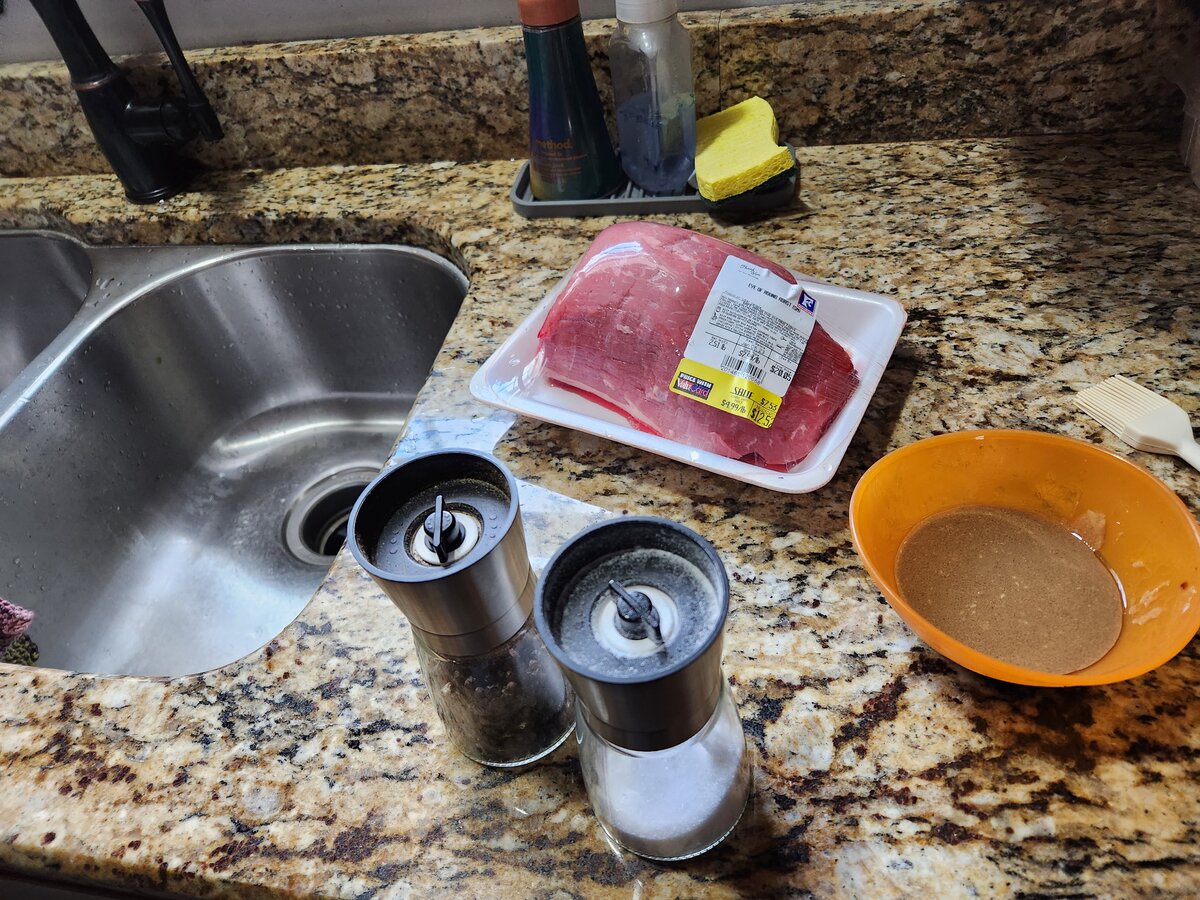 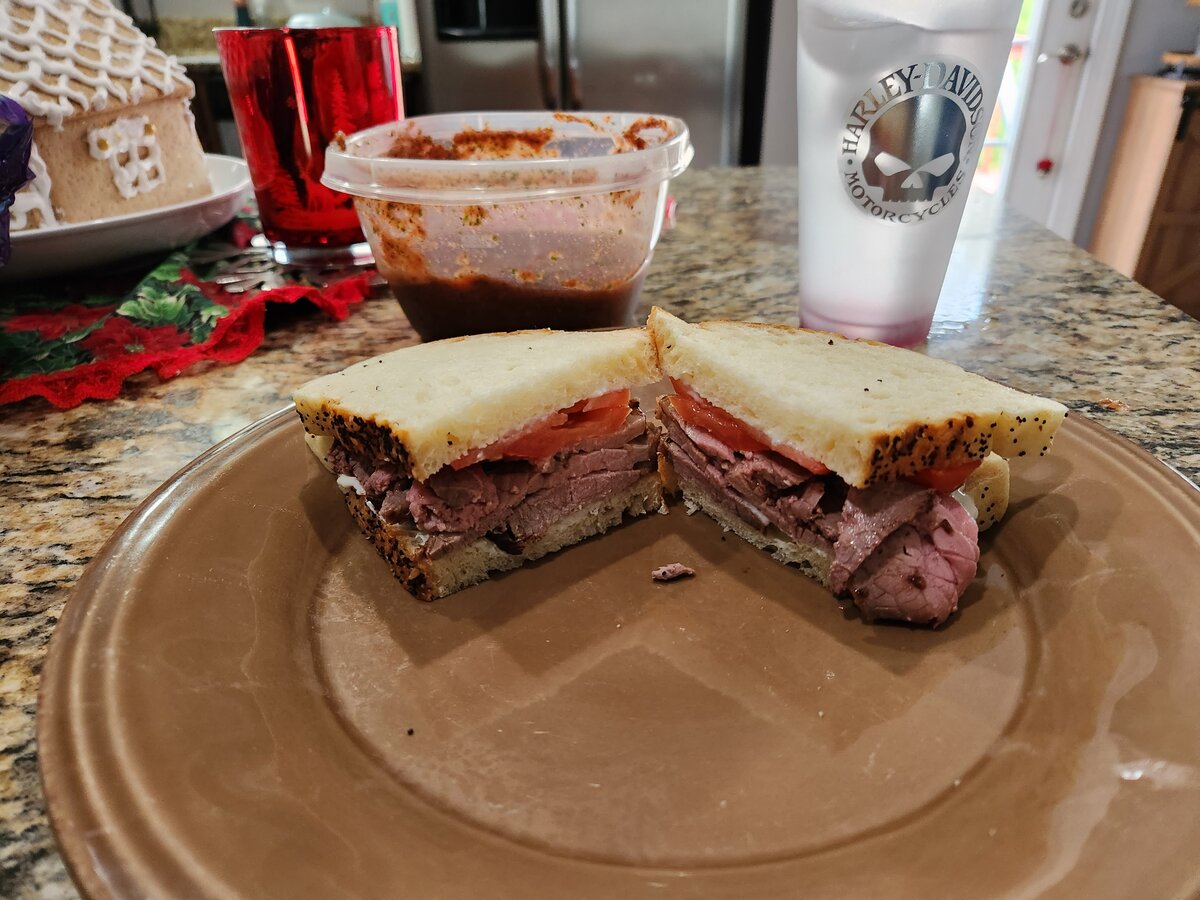 I used the rest of the prime rib in a Shepherd's Pie tonight. Diced the prime rib and put it in the bottom of the baking dish. Made a thickened beef gravy and poured that over the meat. I made some mashed potatoes and mixed saute'ed onions and carrots in them along with some aged cheddar, chives and sour cream. It's in the fridge resting now. I'll be baking it at 400* for around half an hour or until it's hot and toasty. I also had some leftover bacon in the fridge so I chopped that up to put over it along with some more of the cheddar cheese. Should make a good, late dinner tonight when Amy gets home.
•••

I did a 10 pound Prime Rib for new years eve, 225 for 4 hours then a quick sear. Did a little mustard binder, with Trager prime rib seasoning, then topped with butter horseradish mix on top. I used my weber kettle and just lump coal charcoal nothing fancy. Along with a small meat and cheese board. 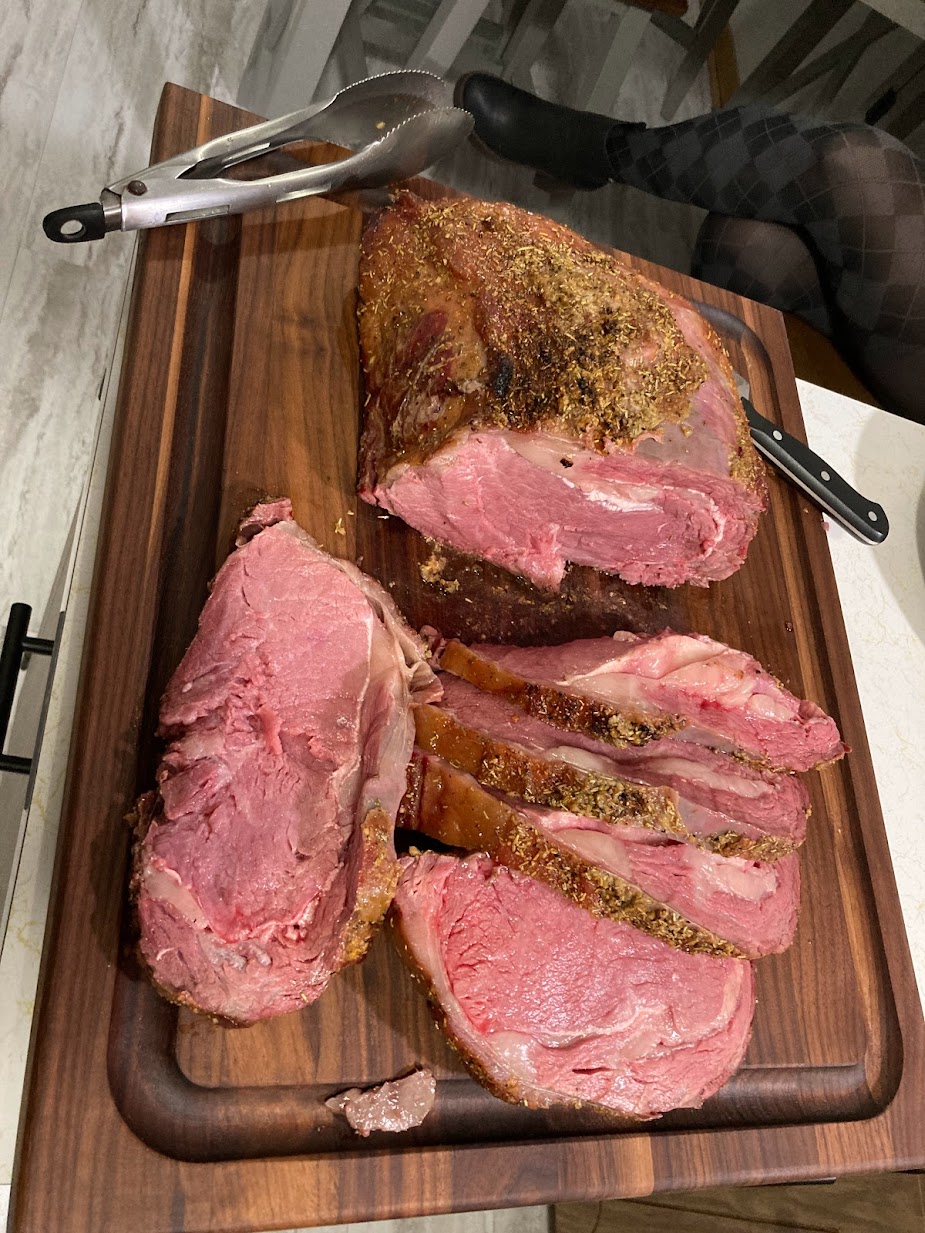 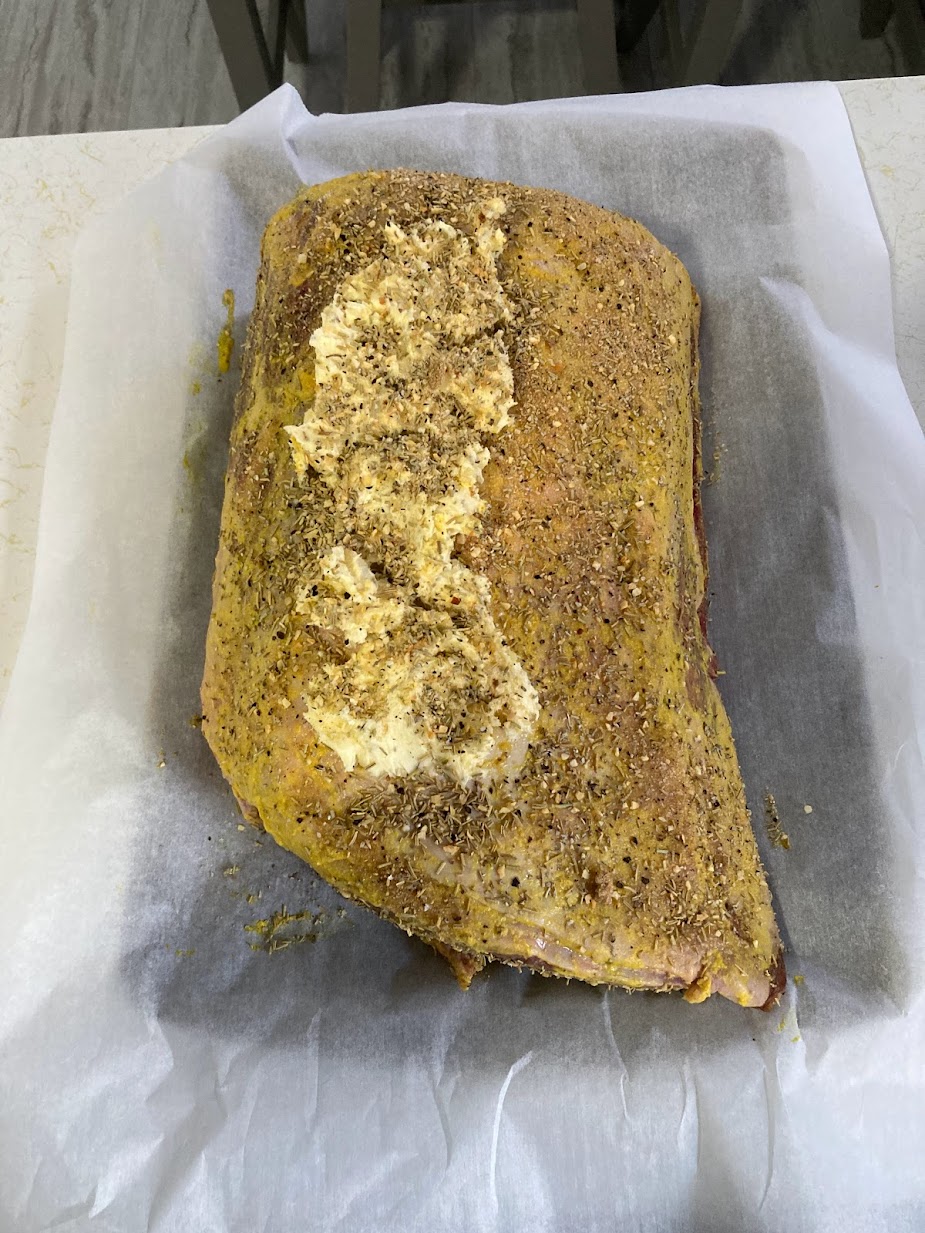 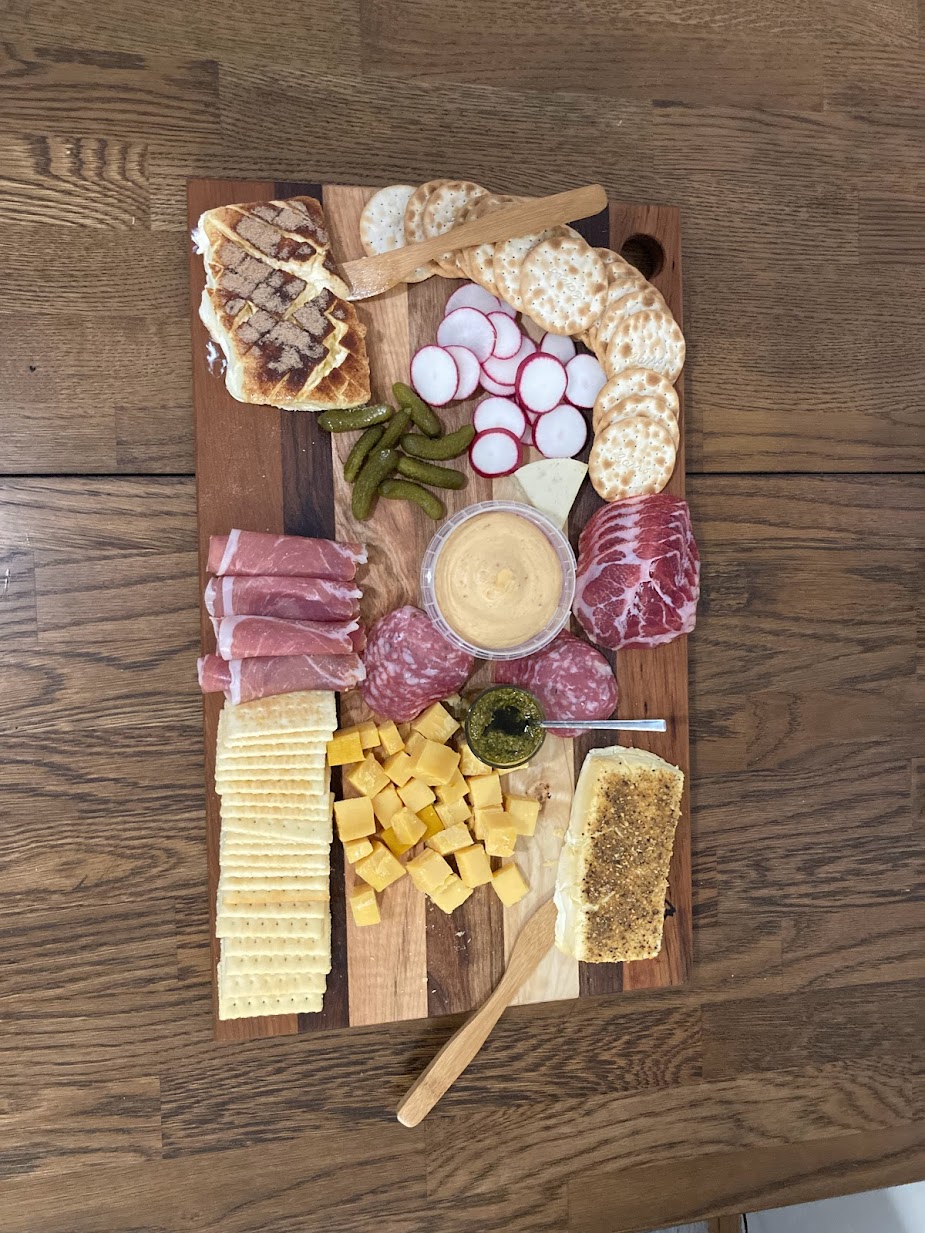 These are pretty cool, not cool enough for me to buy one at $400 when there is nothing wrong with mine lol

Shawn1112 said:
These are pretty cool, not cool enough for me to buy one at $400 when there is nothing wrong with mine lol

you know the economy is fucked when weber is discounting a special edition something
Reactions: Shawn1112
•••

Yaj Yak said:
you know the economy is fucked when weber is discounting a special edition something
Click to expand...

They are still claiming made in America as well. Didnt

Ryan02Stang mention a couple of years ago that someone he knew said they were going to start building them in another country? Or am I thinking of someone else mentioning that
•••

They started getting shit from China.
Reactions: Shawn1112
•••

Shop Grills Made Right Here In The USA​

Dr. Jimbo said:
They started getting shit from China.
Click to expand...

I think thats what was said
Reactions: Dr. Jimbo
•••

Shawn1112 said:
I think thats what was said
Click to expand...

One of my restoration techs used to work for Weber from like 98-2018 and he left when they started getting inferior parts. He was one of their designers.
Reactions: Shawn1112
•••

Yeah, buddy of mine is an engineer there. Said most models are now made in China, and they're using more and more shitty parts from China.

I still use Weber as I assume nearly all brands are Chinese junk at this point.
Reactions: Shawn1112 and Dr. Jimbo
•••

Man, this is a nice brisket. Thick flat and plenty of marbling for Choice. I used Lawry's seasoning salt and added FGP after the pic. 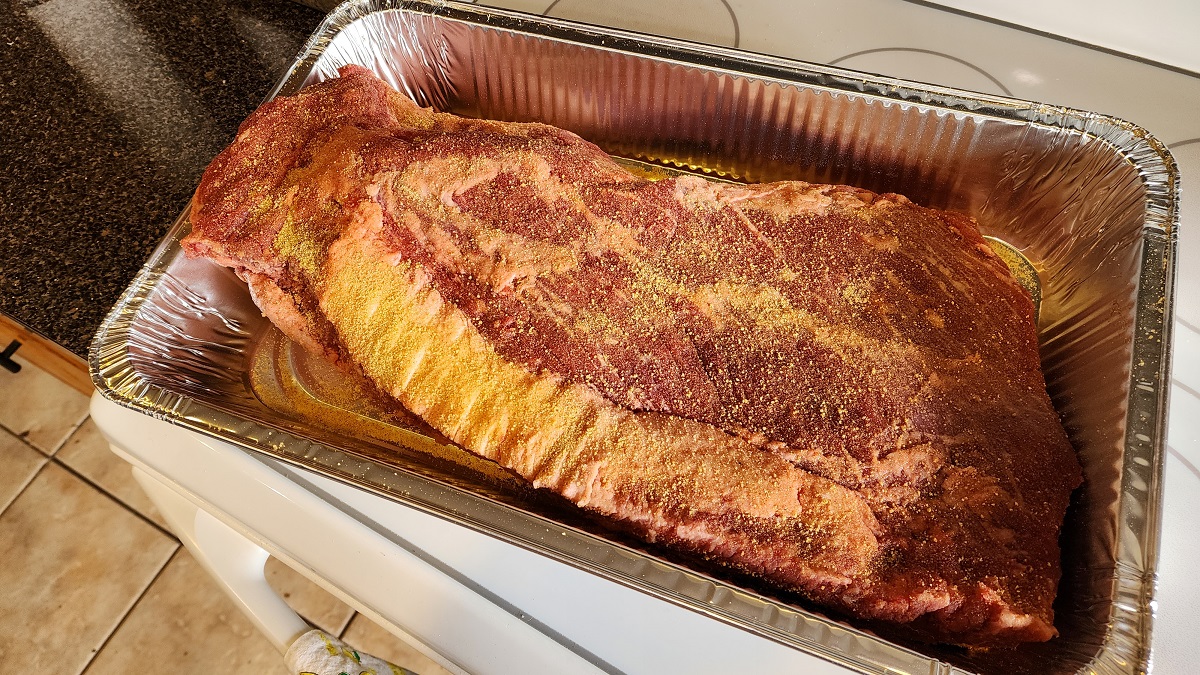 Using the snake method. I ended up adding more hickory than this. 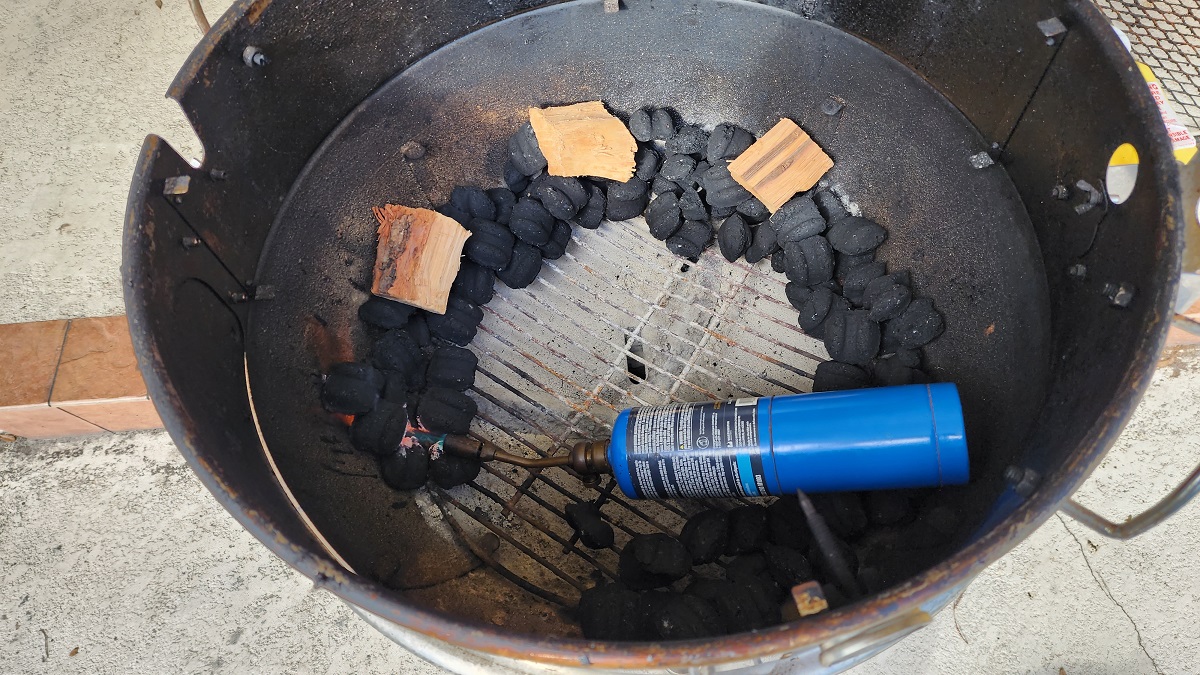 I love the Spider Grills temp and fan control I added to the Weber. Set it at 200* and it hangs out at 200. During this cook I will be moving the temp up to 225 after a few hours and then 250 to render the fat. 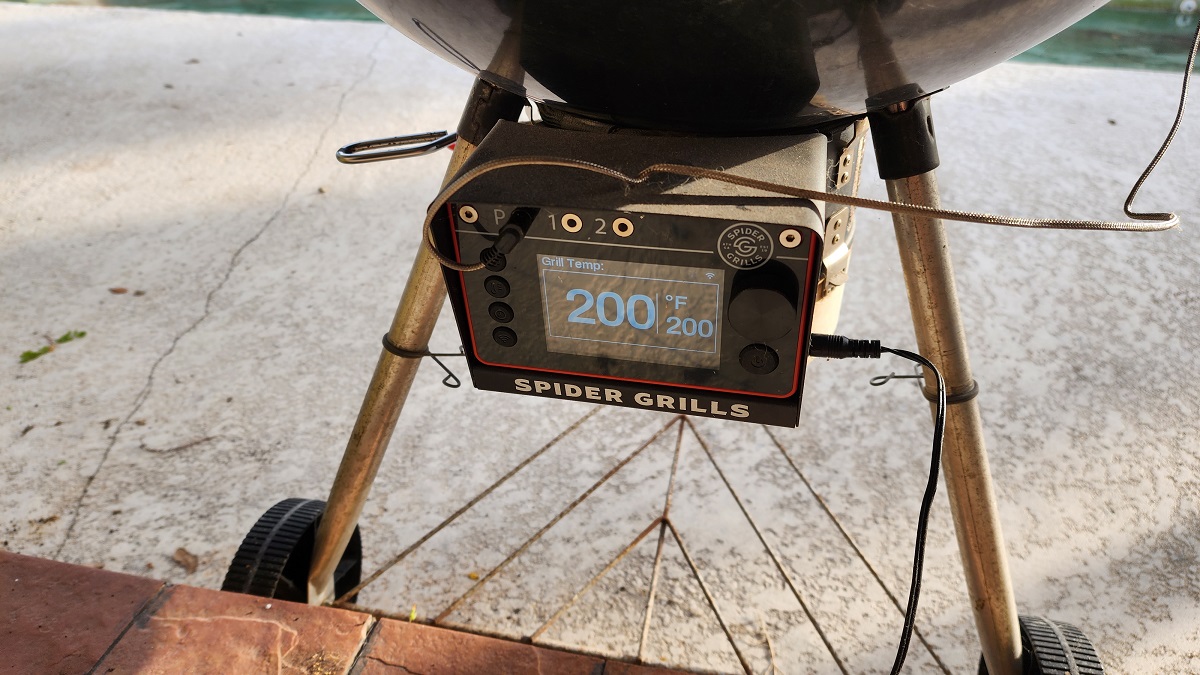 EDIT: I'm about 6 hours into the cook. I also have some wagyu beef tallow smoking to pour on it before I wrap it. 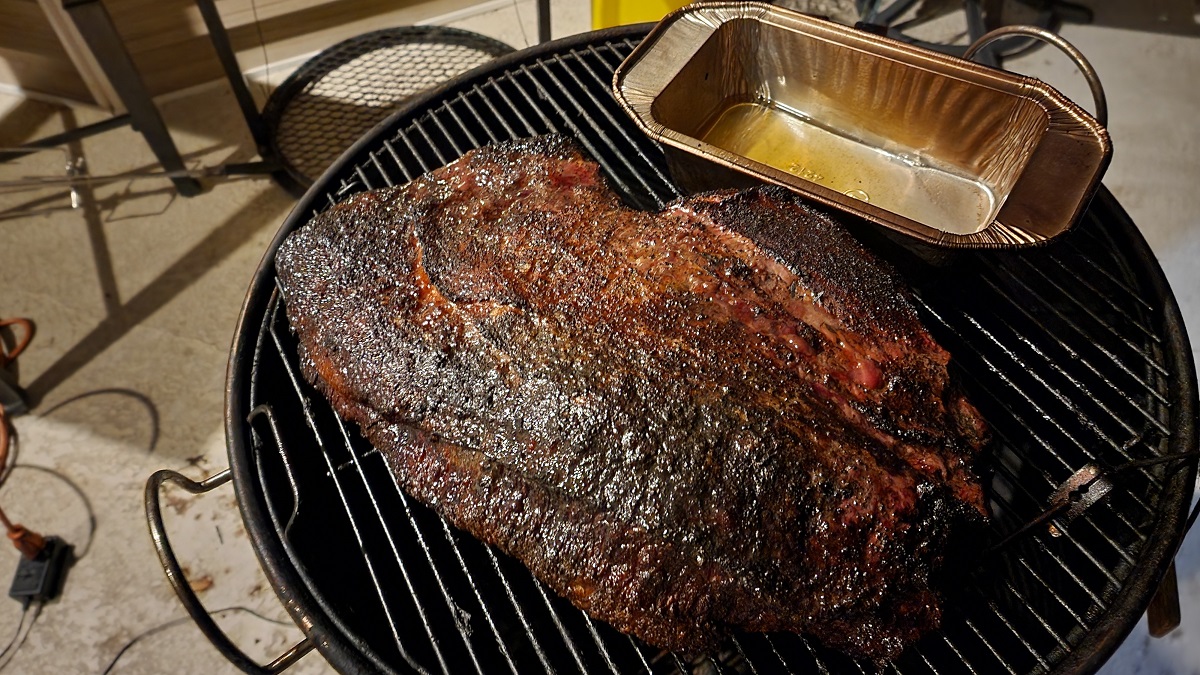 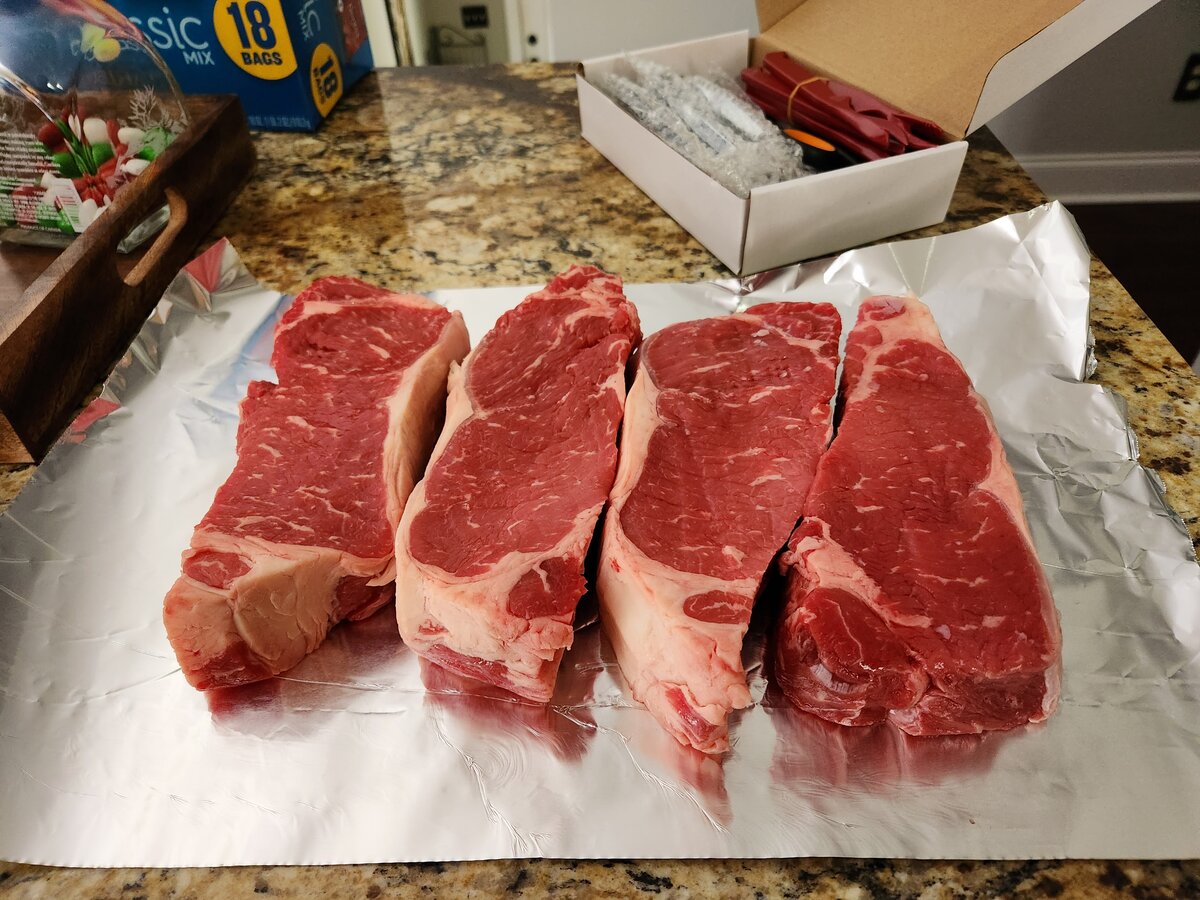 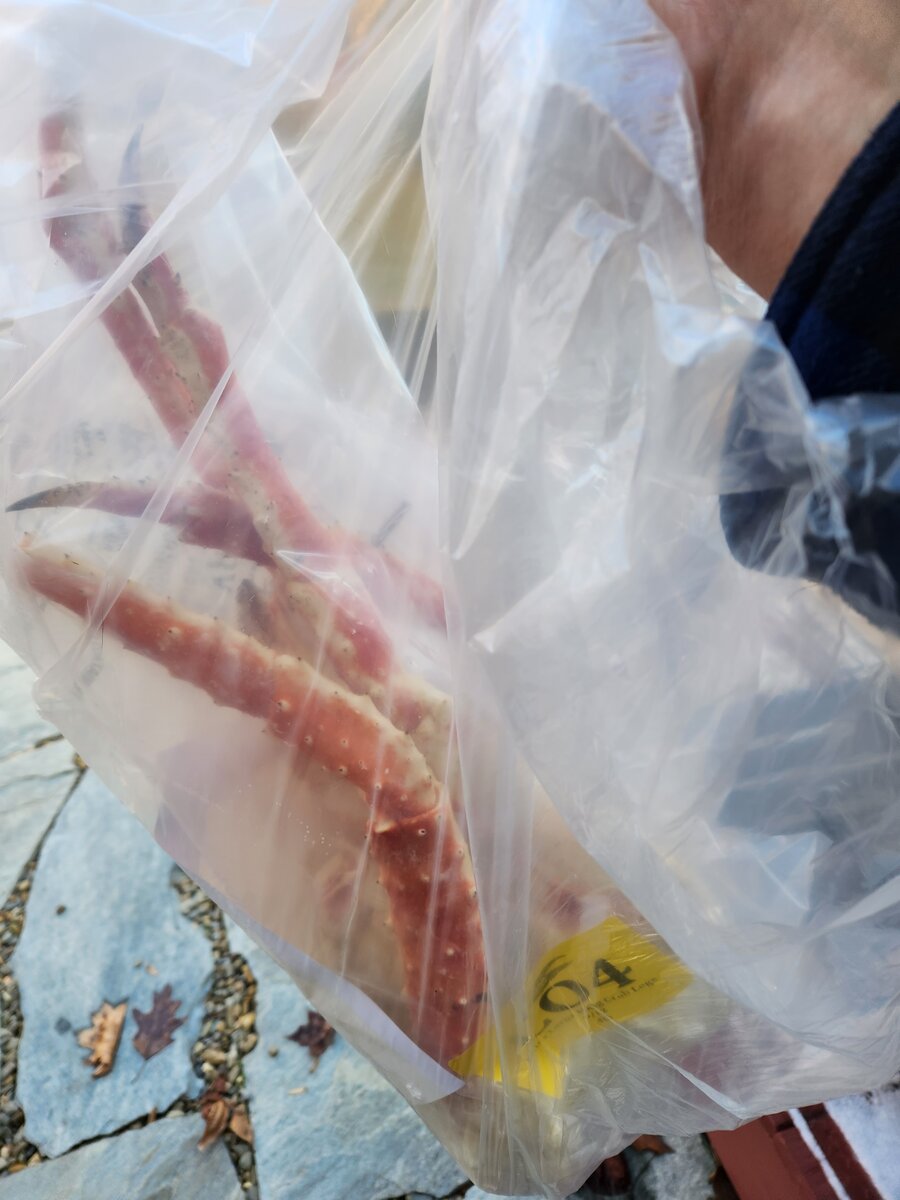 A bit more gray banding than i'd like, but really liked the sear on it. It had a nice smokey crunch to the bark on it. Just a bit too much carry over cook. Smoke and reverse sear. 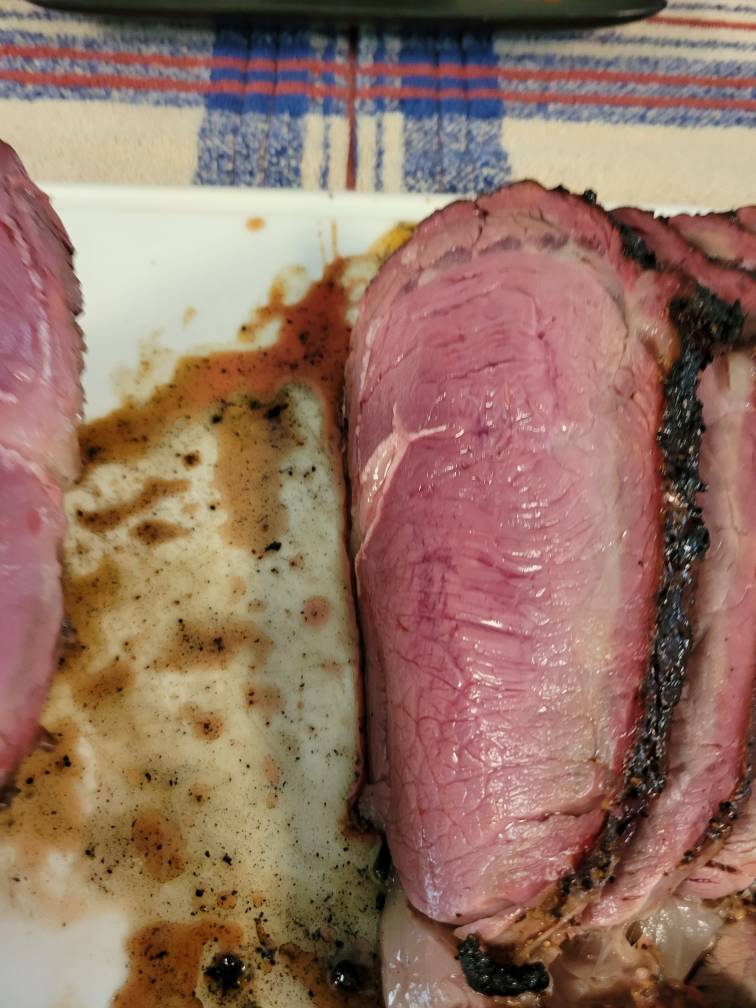 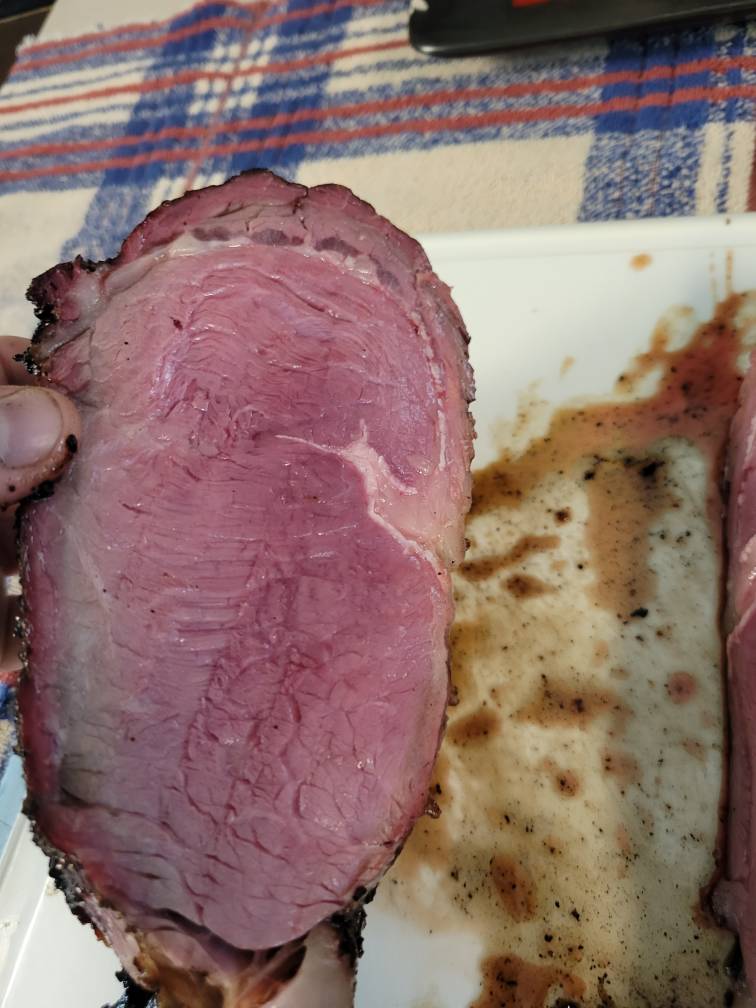 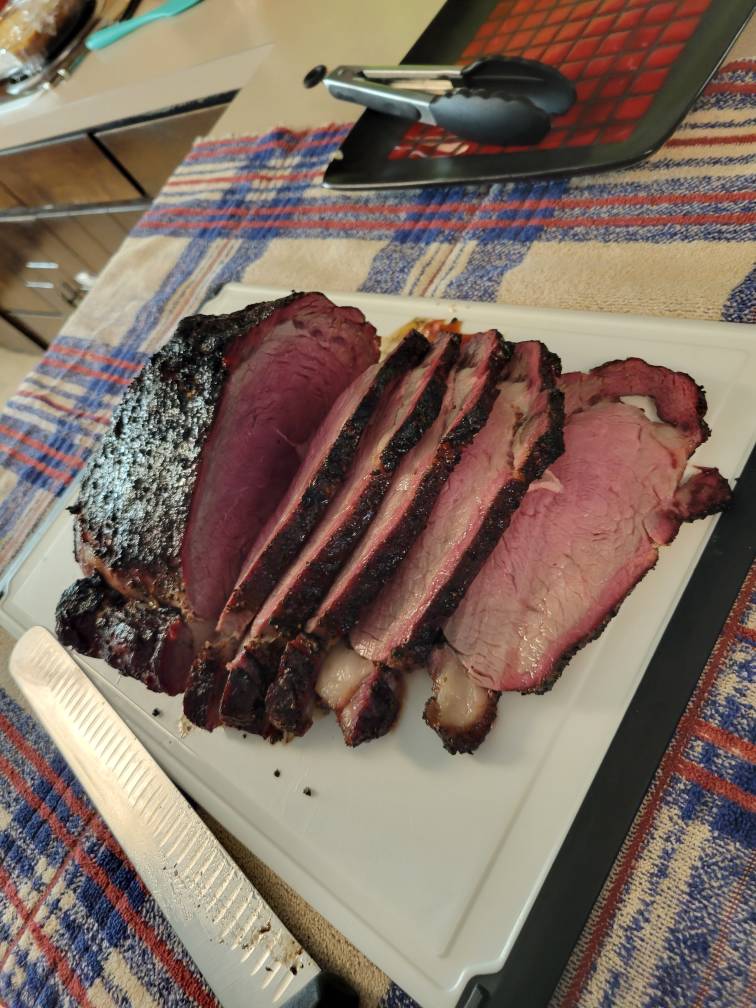 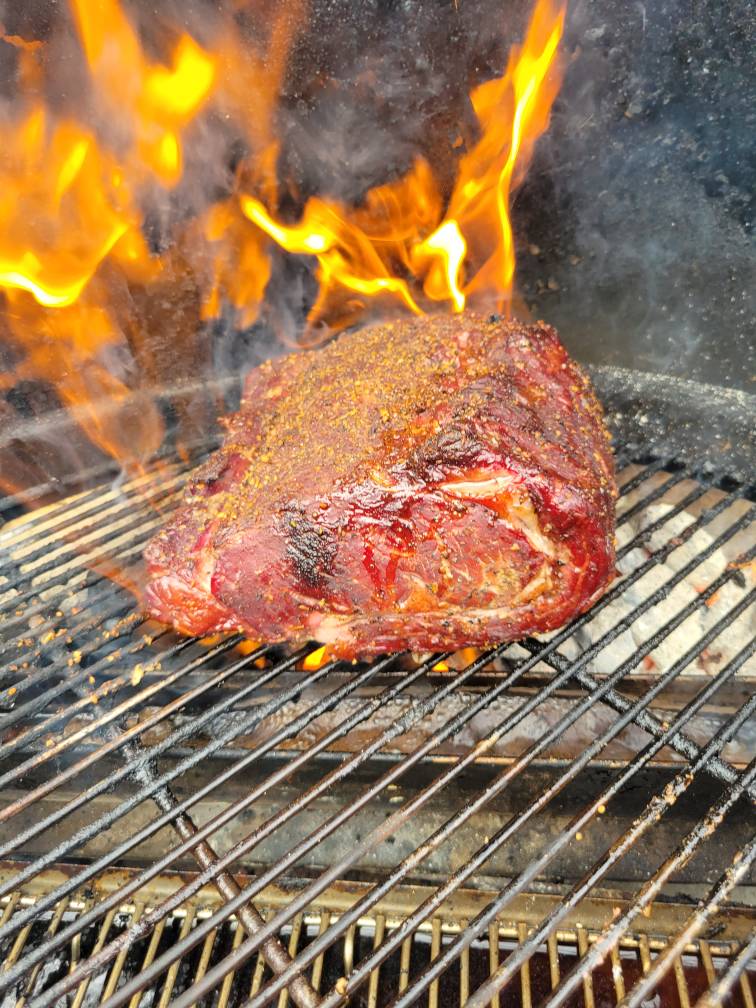 We still need to have some kind of cookoff challenge.

We need a RNS emoji for