They need to ditch this call out first round shit. Also the chi town guys all said the race in is bullshit. If you’re not a tv Star you’re not getting in even if you win.
L

I doubt any chi person unless it’s a shop car is fast enough or tested enough anyway. Saw this in person, not sure I’ve ever seen a faster pass from a non nhra dragster.

Ryan martens final solo pass was prob the fastest pass I’ve ever seen out of a car. (Again non dragster)

At this point, leave the tree and staging the way it is, but turn the clocks on. Guys are posing times they’ve been before, but let’s see it at the race.

I also wonder how “no prep” that track is. Part of me says prep it and let’s see how fast these guys go.

I agree with getting rid of first round call outs too. 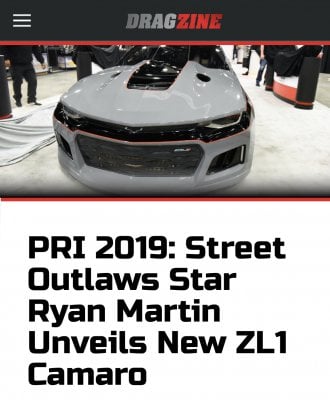 95SC said:
Their no prep is 10 times better then the prep you get on T&T days at the track
Click to expand...

Agreed. Track was not dragged and was sticky for sure. The top end may have been more sketchy, but that track is prepped to make a good show. No one wants to watch a bunch of 4-5k horse power cars do burn outs every launch

That zl1 is sick I wonder how much coin he has in that car.
L

I’d bet if everything was retail and not sponsored probably 350-400 grand if I had to take a stab at it. And I’m still probably shooting low
OP

Gladiator tomatoes review of new SO Fastest in America.

JJ DaBoss is hosting a team street race for $100k. 8 teams battle it out against each other tournament style. Winner gets to race team Memphis for $100k. First episode was kinda long but I guess they had to explain all the rules and shit. Lots of shit talking, drama, and fighting... which I actually like. Cars are $5k POS all the way up to Kye Kelly’s 6 figure shocker. First race out...dude wacks a light pole 100 ft off the starting line some of the cars are wicked hawt. There’s a GTR that looks like a rocket!!! JJ’s persona gets old but once the racing gets going all is forgotten. Wish there was more eye candy but maybe since Lizzy isn’t racing they show more of her when team Nola races Texas!!

Not one of those cars has $5k in them. lmao There are some cheaper cars in there, but not 5K cheap.

I am sure the producers are trying to get the drama and BS as high as they can. "Hey, go over there and tell them your gonna whack their big dollar car with your POS. Go ahead, do it". lol

Half the drama and trash talking looked made up and dumb. I could do with less of that. I think some of the races will be interesting. I put my $0.05 on Detroit. With Memphis maybe taking it due to knowing the street, having fresh cars (since they just show up for the finals), and how they hustle people and play games with leaving way early with the arm drop. But Detroit is experienced and has quicker cars. I'll waste my Monday nights watching it. lol
L

I always loved on the shows when they would say it’s a 10k or less car and boast that they are racing race cars with their cheap street stuff.

Their “cheap” cars prob have 5k in suspension, 15k in a motor without the turbo kit or nitrous, then add in a trans, rear end, fuel system and engine management software and you are pushing 35-40k in parts. Then plus the cost of the car and add in labor if it wasn’t donated or they didn’t do it themselves.
OP 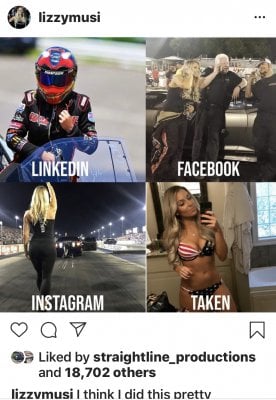 These past two weeks have had some wicked races. I am really digging this series. The GTR is bad ass and all the Detroit boys represented. A couple of KOTS cars too. The only two complaints are not enough Lizzy Musi and too much of JJs brutal commentary. It’s like he took acting 101 and 102 and then dropped out because he thought he learned enough. He is actually funny bad like Spaceballs.

That Chucky dudes car just fucking worked. That was amazing.

I wonder who decided JJ is a guy who should be on TV. I won't watch anything with him on it, just grates on my nerves.
OP

If there ever was a day you should watch this show is next Monday! Team Detroit vs Team NOLA. Winner gets to race Team Memphis with JJ and Precious for $100K....also plenty of shots of Lizzy Musi’s luscious butt

. The racing is legit, nothing is staged. Chucky, Johnny quick, Blain Bro., Kye Kelly and shocker! And did I mention Lizzy Musi? 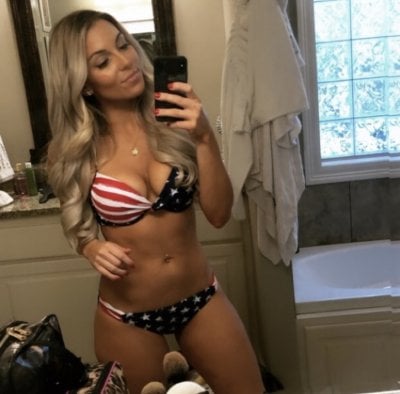 Looks like Chuck from Street Outlaws has seen better days...gots da Rona too!

Birdman had a bad wreck on the street this week too. Seems like he got banged up but not too bad.
OP

It's almost like these cars don't belong on the street

That sucks, I loved how that car was coming along. He’s also a super nice guy, glad he’s okay.