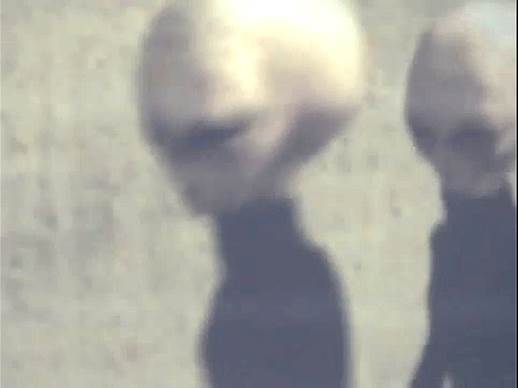 
I work in special effects, creature effects and visual effects for the film industry. IMDB me… Ben Philips. I and those I work with could fake this. The problem is I would need a small crew and would have to spend a lot of prep time and money to pull it off. The clips of Skinny Bob and ‘family vacation’ are one thing… and arguments over frame rate and whether it’s 16mm footage is irrelevant, it’s the creation of the supplemental footage that people tend to ignore and overlook, all of which are totally unique to Ivan 0135’s uploads. None of the other clips have been seen before or since. They comprise of….

A saucer being filmed from a moving vehicle hovering over what looks like a steam boat – digital composition using filmed footage and composited UFO with fantastic tracking.

Cockpit footage showing a saucer flying beside it – again an edited video with an inserted UFO.

An alien walking towards camera – this could be entirely digital but I think not because the camera shake isn’t added as an effect. This means it would be a makeup (mask) and performer or a digital edit with a CG alien.

A panning shot of a crash site in a desert – this is a physical effect shot… meaning the camera was filming an actual thing. This could have been a location build or a miniature model. I don’t think it’s a miniature though because the camera operator is walking while panning which would require the camera being motion controlled to simulate someone walking.

Autopsy footage – this would require a model alien and performers.

The last 3 clips I mentioned take the faking of this to a whole new level of expertise and professionalism. For a start the crash footage would need a location to film and a crew to either build the crashed saucer and bodies in a workshop or out on location, which appears to be a desert. This means money and people to pay, including transport to get the model saucer to location. The autopsy footage is interesting for a few reasons. One being that it’s not the same alien as Skinny Bob and is very short. it is very similar to the Ray Santilli autopsy footage that was admitted to be faked by Santilli himself. However, he claims to this day that he faked it because the original footage he bought degraded due to elemental exposure. This could possibly be a short clip of that original footage or if faked, the creators were hinting at it.

So…. if Skinny Bob was faked he’s either an animatronic puppet or CGI… or a blend of both. If it’s digital then it’s outstanding and the creator was a professional. If it’s digital then it wasn’t key frame animation but motion capture. If it was motion capture then it would need a studio set up. A studio set up means money and more people. If it was a puppet then it’s not only a stunning design but the puppeteers were top of the pile; the way he shifts his stance and looks down when he’s having his height measured is beautifully done and one of the reasons why if it is a computer generated character it was done using motion capture and not key frame animated.

I’m not saying it isn’t faked. I am proposing that if it was, then it was done by a multidisciplinary team of effects professionals. They spent a lot of time and money building physical models for extremely short clips that weren’t even the main subject matter of the video; Skinny Bob.

If faked none of those involved have broke silence since May 2011 to lay claim for their work.
Click to expand...

Cause my dumbass found it second

Watch them, read the analysis.

One of the few that has never been debunked to date.