frank said:
Would you be profitable with the 50k? And if it did go down what would you build next?
Click to expand...

Yes, but not a big enough profit that would make me entertain the $50K. I’ve wanted to build a 71 or 75 Caprice/Impala since I was 19 so that plays a part as well. When I do sell it, my next is going to be a 63 or 64 Impala SS 2dr hardtop and I will build a lowrider.
OP

So just an update on my sounds. I've never been happy the way I should have been with the bass in this car. Highs/mids are incredible and I'm actually adding a Hertz component set of 6.5's with tweets in custom kick panels and 2 more Hertz ST25 horns in custom rear enclosures when the interior gets done. Think if sitting in the back seat, where your outside elbow would be for location of the horns

Back to the bass issue. Remember a buddy of mine did the install, I helped out when I could. When I say buddy, he is a friend and not someone I hang out with all the time or someone I go out of my way to see. But rather someone I have known a long time and always has been a stand up dude. When I asked him to do my car, there were rumors out there that he did a few people wrong but more good things than bad things. Talking to him I brought that up and he said you know how the streets be, MFers wanna hate. I understood that as its like that. When we talked about the box design and setup, he talked me into a blow by, meaning it would be ported thru the rear deck to get most of the bass into the cabin of the car. We also talked about doing the box in birchwood, in fact I went and bought the shit and delivered it to the shop! So the bass has never hit as hard as I felt it should, he said when he tuned it, he kept the gains down as we didnt know the history of the subs. Told me after a month or so, come back in and he will turn it up and it will hit hard as shit. Well, I just never had the time and wanted to cruise the couple of months I had and figured I would address it myself come winter time.

Last week the bass was getting worse, so I removed the beauty panels to take a look. Noticed one of my sub amps the gains were all the way down and the other was pretty high. I'm like WTF, why did he do that. One amp was hot AF and one sub was barely playing. Call another buddy who is a whiz at this shit and competes in SPL competitions and right now is like top 10 in the country. He said to send him pics and a video, he calls me and say the box is the issue. Starting talking like rain man with all these numbers and XXXX this and XXXX this and it doesnt equal XXXX. So I tell him, I'll run the car by you and we can go over it together. I'm better at understanding shit when I see it explained to me in person. Shoot out to his house and he starts explaining everything to me. Basically the way the box was built, the port in my rear deck needed to be like 30" wide and it was 10" wide lol. It was a 1-1 ratio box and shoulda been a 3-1 ratio box. On top of that, the subs should have been mounted inverted for my application and they werent. Tell him, I'll leave the car with him, build me a rear firing, rear ported box as I'm not having a 30" wide port in my rear deck.

He starts tearing the old box out 2 days ago and this MFer didnt pre-drill any of the screws so there were cracks all over. On top of that, he didnt use the birchwood I bought, he built 90% of it out of particle board. He used the birchwood only up front where you could see it, everything else was wrapped in black vinyl. Box wasnt sealed correctly either. Then tells me he just re-did a box for someone with a Tahoe who used my buddy as well. Did the exact same shit on that box. Charged for Birch and used particle board. Call this MFer who did the build and went crazy on him, he is blaming a worker that he wound up firing last month for stealing. He said he had his worker build and wrap the box while he was on a mini get away for a long weekend with the Wife and kids. I said if thats the case, thats fine for the use of the particle board vs the birch, and I would believe it but you just did it to someone else as well. Also please explain the piss poor design for the box. Explained everything wrong and told him about the gains on the amps. He is 100% back pedaling now. Told him I want $550 back as thats was the cost of the birch and for him to build just the box. He claims he will have it in a few weeks. So I'm assuming he will be stealing from Peter to pay Paul!

Car should be done tonight with a new rear firing/rear ported box.

I feel like I could never trust any stereo dude I’ve ever met.
OP

Man dude, its fucking crazy. Known him a long fucking time, I had an issue with the first guy who did my suspension on my Regal as well. Knew him a long ass time as well. Its not like I'm a cheap fuck either and beating these guys up on their prices. I've been around a long time and know my way around a car especially sounds. If its a fair price, I dont mind paying it. Shoulda took the time and did it myself. My only issue is not knowing how to build the center console or beauty panels in the trunk. I probably could have figured it out with some trial and error though.

Haven’t checked in here ina min and now I see we gotta pull up on somebody. That sucks!

WTF is it with shops being cheap AF when they really don't need to be. I just don't get it.
It is really hard to find good shops anymore and I think part of that is due to lack of available good help. People just DGAF anymore.
Glad you have a guy to lean on Shawn, hopefully he gets this shit straightened out for ya.
OP

Great White Drake said:
now I see we gotta pull up on somebody. That sucks!
Click to expand...

And he knows that, hence the reason he has agreed to pay me back for the box portion. Other than that, he did well on the 2 consoles and beauty panels.

Well like the saying goes. The proof is in the pudding. Night and fucking day difference on how hard it’s hitting. My guy that took me to pickup my car said with me behind him it was hitting super hard. My fucking Holley 3.5” screen popped out of the center console and my plate almost fell off. 1 screw completely gone, the other screw about 2 turns away from falling out. 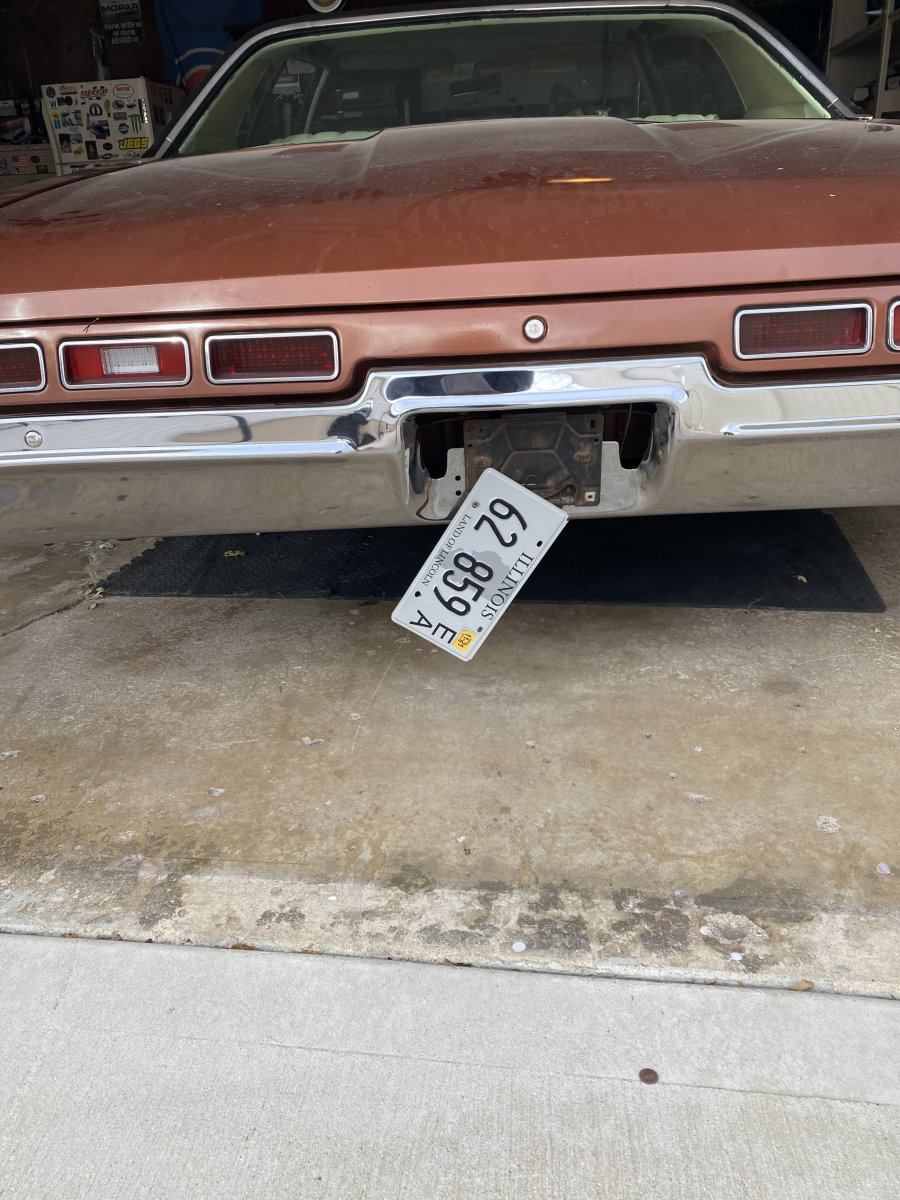 Shawn1112 said:
Well like the saying goes. The proof is in the pudding. Night and fucking day difference on how hard it’s hitting. My guy that took me to pickup my car said with me behind him it was hitting super hard. My fucking Holley 3.5” screen popped out of the center console and my plate almost fell off. 1 screw completely gone, the other screw about 2 turns away from falling out.

$210 for 3 replica emblems…..SMFH.
Can’t find door handles to save my life other than cheap China shit. Mine aren’t horrible but with new paint I want them looking new as well. Ill see if re-chroming them is an option. 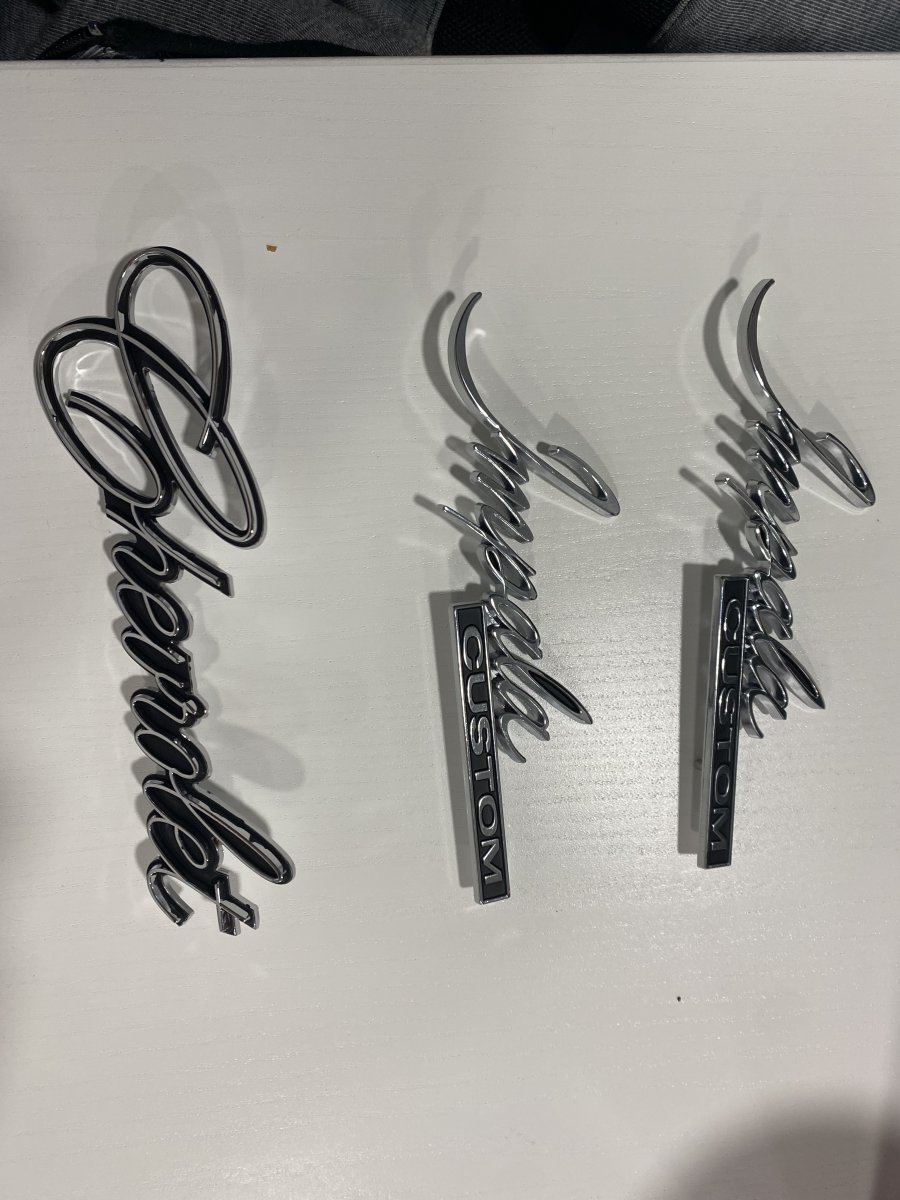 If your looking for OEM/clean used parts I think your going to have to go way south or west coast.

Unless you can find people that have them stashed inside.

Its a bitch finding oem parts.

It took over 3 years to find all the interior parts for a 60 Ventura my grandpa did. Most of it came from Arizona.

98GrandPrixIraqVet said:
If your looking for OEM/clean used parts I think your going to have to go way south or west coast.

Unless you can find people that have them stashed inside.

Its a bitch finding oem parts.

It took over 3 years to find all the interior parts for a 60 Ventura my grandpa did. Most of it came from Arizona.

I got my Miami Donk peeps on the hunt as well. I also check a lot of the FB pages that I’m allowed to see without having FB.

There's a guy on IG and YouTube with the name "dezzysspeedshop" and he hoards Impala parts. He is in Washington or Oregon somewhere, but still would probably be worth checking him out and sending him a message.

Shawn1112 said:
I got my Miami Donk peeps on the hunt as well. I also check a lot of the FB pages that I’m allowed to see without having FB.
Click to expand...

Try these guys in AZ. We used to find gold out there: https://hiddenvalleyautoparts.com/