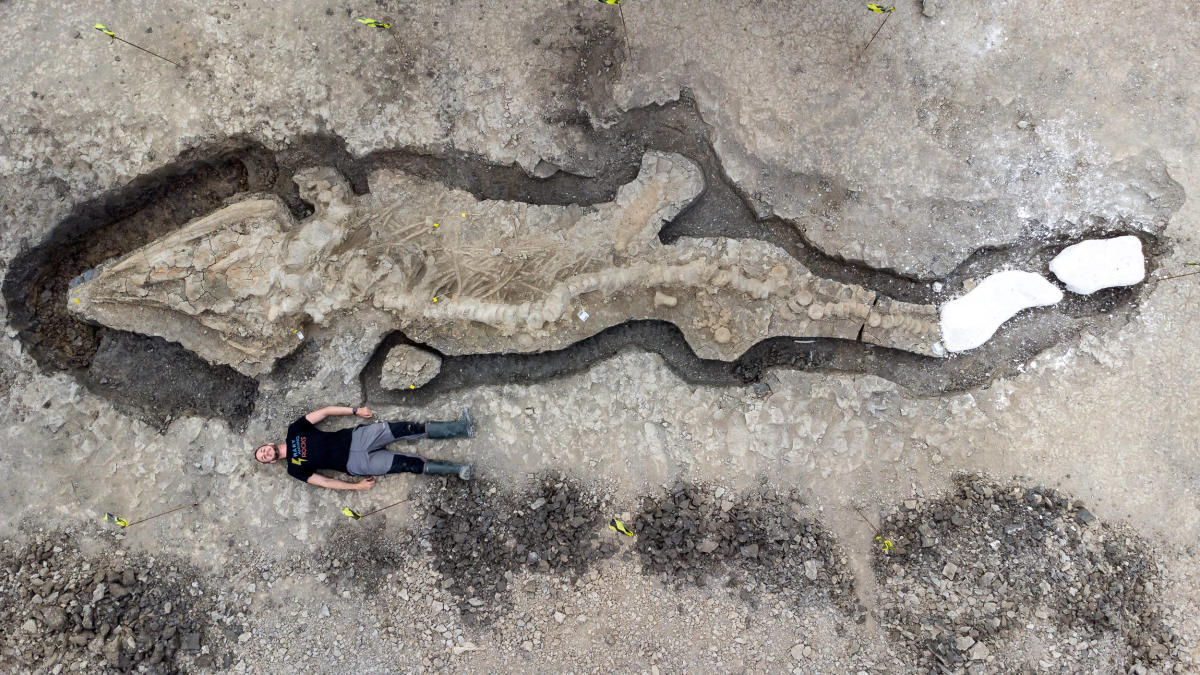 The skeleton of an extinct prehistoric reptile predator, known as a sea dragon, is the largest and most complete ever discovered in the U.K., researchers said Monday.

LONDON — What began with routine maintenance at a British nature reserve and reservoir has been hailed as a giant Jurassic "mega-find."

Officials at Anglian Water and the Leicestershire and Rutland Wildlife Trust said Monday that they had uncovered the skeleton of an extinct prehistoric reptile predator, known colloquially as a sea dragon — the largest and most complete ever discovered in the U.K.

The ichthyosaur fossil measures over 32 feet in length and has a 6-foot skull weighing around one ton. It lived about 180 million years ago, during the Jurassic Period when dinosaurs walked on land.

“It’s the most complete and larger than any dinosaur skeleton ever found here, so it’s a mega-find for so many reasons,” said paleontologist Dean Lomax, who led the excavation.

“During this time period, it would have been right at the top of the food chain. It’s an ultimate apex predator, perhaps one of the biggest animals in the sea worldwide.”

Two other incomplete and smaller ichthyosaurs were found on the site in the 1970s, according to Anglian Water, which co-operates the reservoir. Lomax added that larger ichthyosaur fossils have been found outside of the U.K., including in Canada, though remains of this large size are rare.

Ichthyosaurs, extinct marine reptiles that resemble dolphins or sharks, were first discovered nearly 200 years ago on the Jurassic Coast in the south of England. They went extinct 90 million years ago.

Rutland Water Conservation team leader Joe Davis first came across the fossil as he and a colleague walked across an area of the reserve that was being drained early last year.
Click to expand...

which, by the way, was a horribly awesome movie.

See this goes back to what I've always said.

Everybody needs to start digging... Like everywhere. And every one.

We can't even begin to imagine how long ago that was. Can't even process that

We can't even begin to imagine how long ago that was. Can't even process that
Click to expand...

it was 180 million years ago

DEEZUZ said:
See this goes back to what I've always said.

Head up to Oak Island and show them how to do it.

Mook said:
which, by the way, was a horribly awesome movie.
Click to expand...

Betty White in that movie.

We can't even begin to imagine how long ago that was. Can't even process that
Click to expand...

The entire duration of human civilization (~6500 years) is 0.0036% of that time. Which is basically a rounding error.