I coulda done more for it but not too bad for a few 2nd gear pulls down the backroad. I need my go fast machine to get done.

5.3 Tahoe non flex bone stock buddy of mine wanted cleaned up for mpgs and turn off the dod as a family ride. No codes touched. Pump e10 straightened some of gms fueling bs pulled some knock and cleaned up maf and couple spots in speed density. First pull after my base tweaks showed 29.6 on the maf and my experience these show up around 27ish or worse before gettin in em. For not even a cold air intake im pretty pleased with it.

Grill me if I could be doin better tho 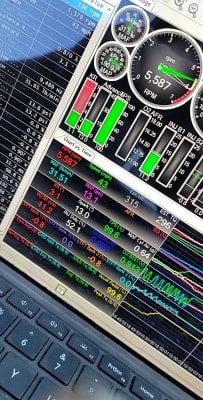 Well, my tire biz is basically dead in the water and a huge load of my customers followed the truck as I expected. Mechanical jobs haven't shown up. No word on the dyno. Financials comin to a screeching halt and tryin to catch up on the few things in my a/r. May as well have locked the accounts as I got a pretty firm no more tires until things are situated and I'm currently waitin on a refi to square up the rest of the mess that disaster left me with.

Plenty of equity in the house so worst case I relocate use the check from it to put my cards back at zero and wheel around and find somethin better in a few months. Me bein me ill figure some way to come out on top and the worst thing life can do is give me time to think and fight back.

Moral of the story is either bail out early, or go down with the ship at least in this case. Cuz tryin to mop up the middle and keep right sucks and people are only loyal to those that serve their needs. But I started that tire biz with my last paycheck a pair of bars and a worn out compressor I got cheap from the rental store and put beer box and orange goo head gaskets in to get by til I could buy a new one. And I aint goin back to gettin a real job anytime soon so this could get all sorts of fun and if we're goin to real life ps2 racing game shit then at least I know I'm not losin

Side note the ltzs still kickin the pants off the tune I dropped in it a few months ago and without the tools in the back I can't keep the 12.50 toyos in the back planted on dry pavement even with tcs on. Feelings a lil richer than it was but dammit at 22-24 highway and consistent 43s and 4s on the maf it's hard to mess with it much til I decide to play with the fuel pump and shove some corn in it.

Need this dyno to show up..but I guess life generally takes its own route for a reason so.

Killin time waitin to hear on the dyne and tryin to catch up on stuff at home but ive still taken a few small tire gigs and misc mechanical in the meantime.

Did a lock cylinder today in a buick, wasn't all that bad other than I was glad I wrote down my numbers when I was coding the lock on it. Expensive little things tho.