So this car has a ridiculous amount of work already put into it. Overtime I'll try to highlight some of the big points with the transmission swap and some of the other really cool details, but for now I'm going to briefly explain what the car looks like when I bought it and what's going on right now with the build. 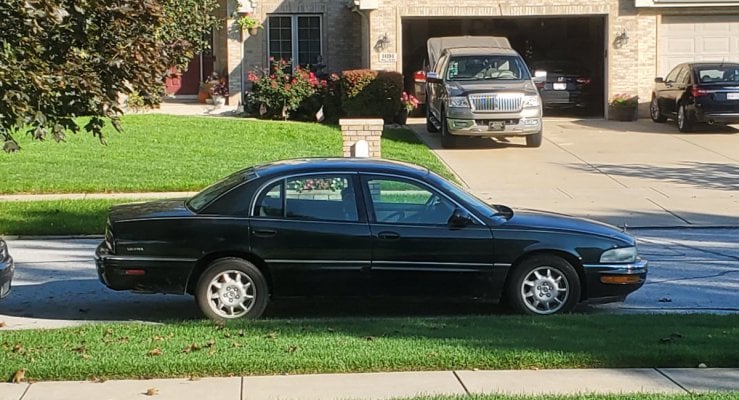 I bought the car earlier this summer in very poor condition. All the high $$$ parts were already on the car, I've put less than $500 into it as of now. Bought the car for a great price, even if I had known everything wrong with it I still would have paid that much in a heartbeat. 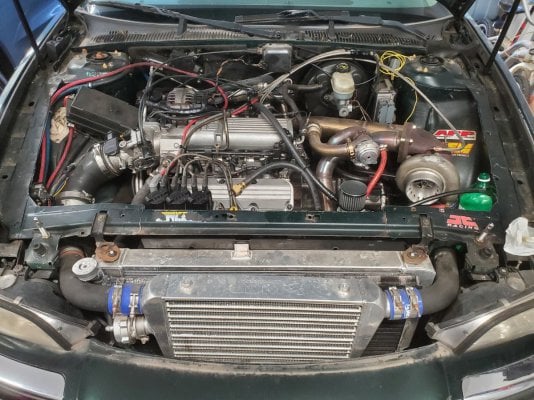 The 4T80e conversion was incomplete (car wouldn't shift into 3rd gear), everything was leaking except the rear suspension air bags, lots of misfires, horrible squealing from the engine due to improper belt routing, and other things I'm probably not thinking of.

Here's what the car came with:

Engine:
-VS Cam with new GM timing chain
-Cobb Racing one-off turbo kit
-Camaro intake for beautiful routing of the charge pipe through the air/air intercooler
-(Unsure of what turbo is on it)
-No coolant overflow
-Stock Camaro TB and MAF (MAF was getting maxed out with the springs that came in the wastegate and blowoff)
-LS3 MAF installed but not wired up or tuned

Exterior:
-Rust
-Body panels in two different shades of green
-Rust
-Front end body panels are not from an Ultra (the car is an Ultra)
-Rust

Fast forward to a week ago...

My friend Daniel has had possession of the car ever since we got it. He's been dailying while stress testing and taking care of little details, repairs, tuning tweaks, and some diagnostics. It's a win win for us because he doesn't need to spend money for his own car, he really enjoys the project, and I didn't have storage space or time for another project lol...

Anyways, even though we knew the mass airflow sensor was getting maxed out, we didn't really worry about it because we weren't getting any knock. During an extended 20 plus PSI pull he blew out one of the head gaskets. I'm sure the AFR was quite lean and I'm thankful we didn't lose a piston. We will be keeping a close eye on the afrs until we rework the mass air flow sensor system. 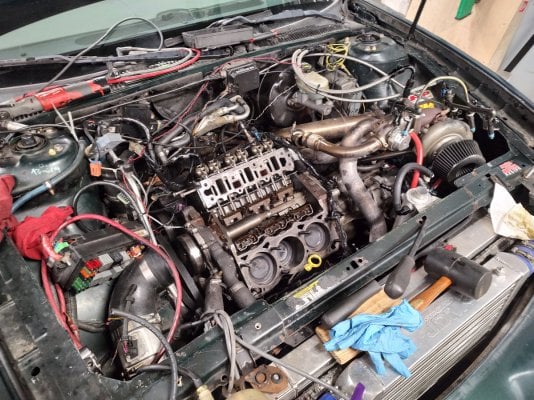 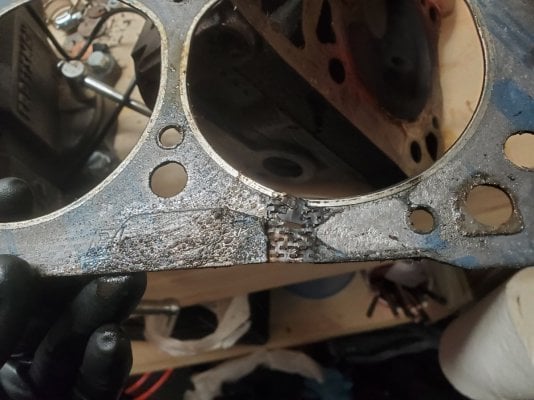 Before we can rework the mass air flow sensor, we need to finish getting the car running good. The afrs are all over the place at idle because the oxygen sensor hasn't really been working and the used one I had laying around that we tried to put in when doing the head gaskets also isn't working. While doing the head gaskets we found that the spark plug gaps were very inconsistent from 24 thou all the way up to close to 40. After finishing the head gaskets and regapping the plugs, the misfires are gone at idle and full throttle. 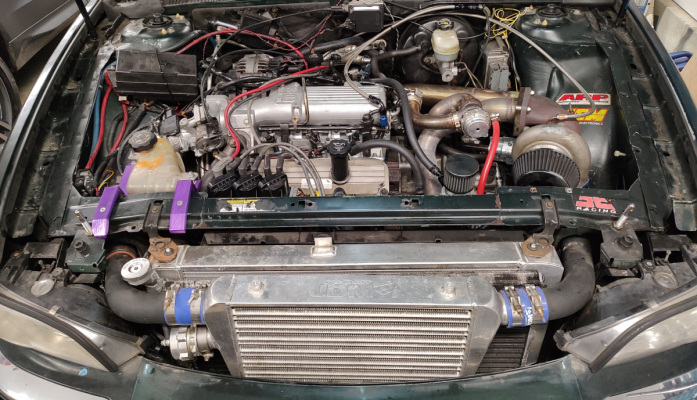 Next steps will be to convert the ignition system to LS coils and try another oxygen sensor. As soon as the AFRs are good and the misfires are completely gone at the same time, we will be putting a mini AFC on the stock Camaro mass air flow sensor currently being used.
Click to read more...

That is fantastic! I would love to know how you get the 4t80 working
TS
TS

SleeperLS said:
That is fantastic! I would love to know how you get the 4t80 working
Click to expand...

That's definitely going to be one of the first big things I talk about in this thread, but I'll give you the short answer now:
See that yellow wire in the top right of the engine bay going from the strut mount bolt to the PCM? That was the solution.

I suppose I should talk about the 4T80 sooner than later haha...

So the previous owner had actually done everything right in the swap. The only problem was that the 4T80 he used was too new!

I still to this day haven't found anyone else who was able to get one of the older PCMs to control a newer trans. This is the FIRST DOCUMENTED example of controlling a newer trans with an older PCM.

After I committed to buying the car, I asked the owner a lot of questions and did a ton of research, including talking to turboSBC400 at one of the Thursday night gatherings in Algonquin (or whatever his name is on here...). Hey keyed me off to the fact that the trans wasn't compatible due to the year combination.

I did a lot of research and looking at wiring diagrams and pinouts, and came up with a plan that I believed would allow the PCM to control the transmission. I have the information saved on my phone but I'm getting a "file too large" error... I'll finish this when I find a solution to that.

Gotta love James. I do know the issue you ran into actually. When I had my Monte Carlo LS swapped to a L67/4t65ehd combo, we had to use a newer PCM to get the trans to shift. This is an awesome project.

I've talked to him about this on Facebook. Pretty awesome.

This is so exciting! It makes me want to build another car when I'm done with the Camaro.

This is cool.
TS
TS

I can't stay off the throttle now that all the misfires are gone... Almost ready to upgrade the MAF setup! 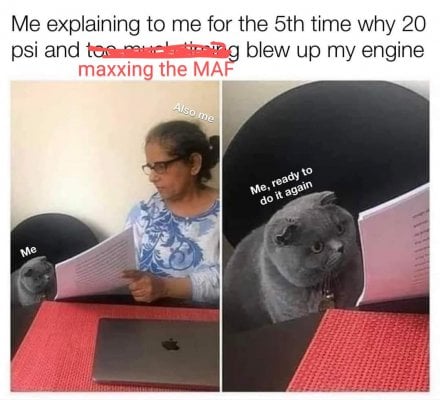 Back to the transmission control solution...

I found this table in the original 4T65e service manuals describing manual valve signals in different circumstances. It shows for D2, all four circuits are showing 12V, or OPEN circuits. For D4, two of the circuits were grounded: 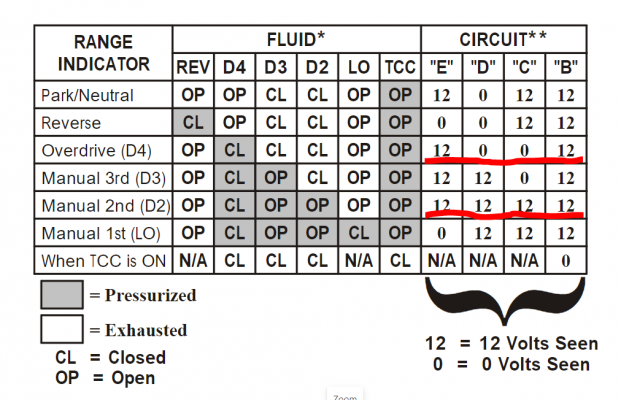 I hypothesized that the transmission would work in D4 if I manually grounded two of the wires. However I suspected that car may also decide not to shift into reverse or work in D1, D2, or D3.

I ran the idea by

Turbocharged400sbc and he told me it wouldn't work. He said the circuits need to be grounded within a split second of the shift or the transmission would go into limp mode.

When I took delivery of the car, I cut the two wires and grounded the PCM side to the strut tower bolt: 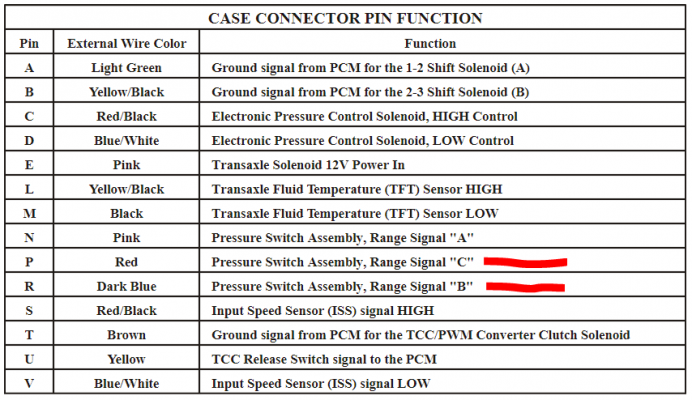 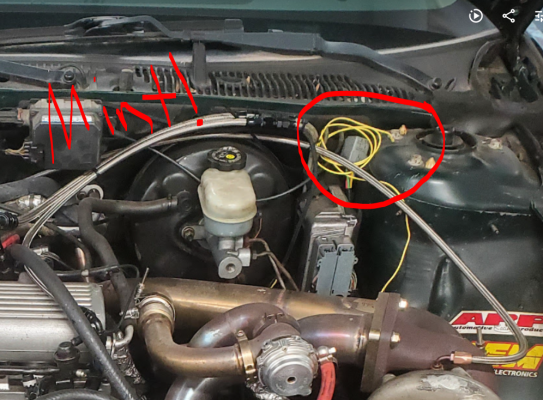 Took her out on a test drive and found all range positions working normally! Reverse, D1, D2, D3, and D4!

Since then, Daniel and I have been fine tuning the transmission settings and pressures, and have confirmed that no limp mode is activating. It could be that a limp mode would have activated without tuning out codes, but we tuned out all the transmission codes that were being thrown that were related to the "fix".

As of now, the only thing we aren't satisfied with is the torque converter. With pressure adjustments, it'll either lock up suddenly or slip continuously. I'm guessing the billet torque converter isn't made for soft applications
TS
TS

Back to the present: COIL PER PLUG CONVERSION

Been sick the last two days, so I hit the CAD hard with the coil mounts and ICM interface case. I made a separate thread https://www.thechicagogarage.com/threads/coil-per-plug-conversion-for-3800s.178670/ for a more detailed walkthrough of the coil per plug conversion, here's some of the more fun stuff that's specific to this car:

This sketch was the skeleton for both flex gaskets and the cover for making the ignition interface as weatherproof as possible in the engine bay. Both gaskets will be Flexible TPU and the cover will be PETg for now, possibly nylon later if I can get that printing good on my printer later. I should be fine with PETg though for this. 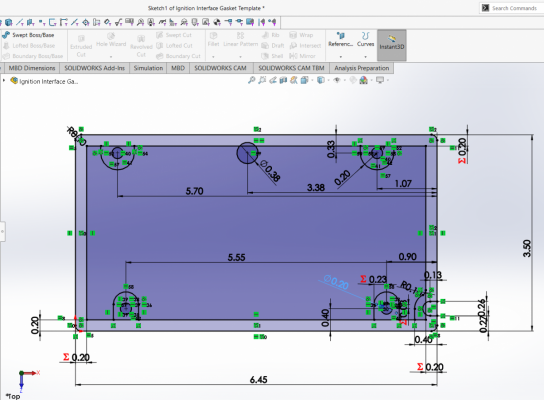 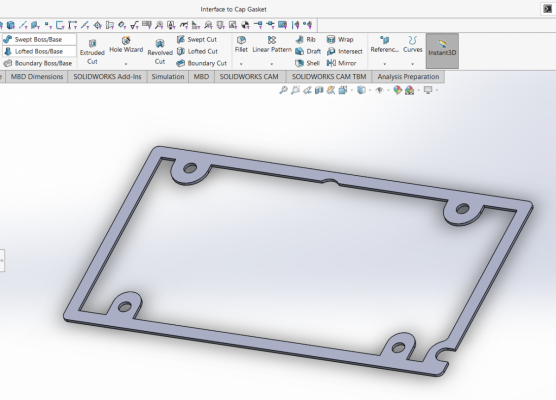 This is the gasket that molds to the top of the ICM, and fits into all the nooks and crannies around the outside. That bottom right spot may need a LIM gasket dab of RTV but the rest should be able to go on dry! 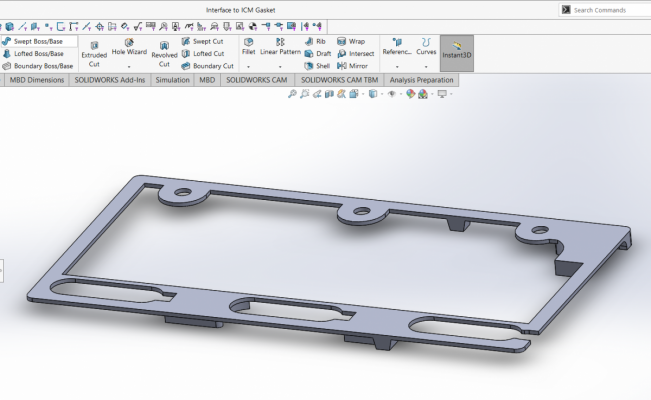 The indents around the bolt holes in the cover are specifically to allow reuse of stock ICM bolts. I want to avoid custom bolts as much as possible because I LOVE dropping them! 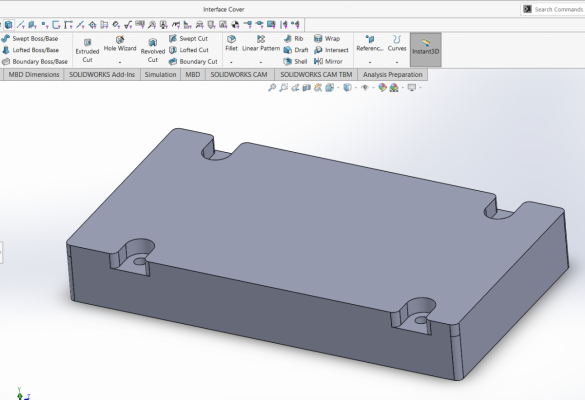 Front coil mount. This is a bottom view, you can see compression slots for lock nuts so I won't have to hold a nut AND bolt during install, or thread into plastic. The gray lines outline the removable piece that clamps the assembly to the oil filler neck outlet. 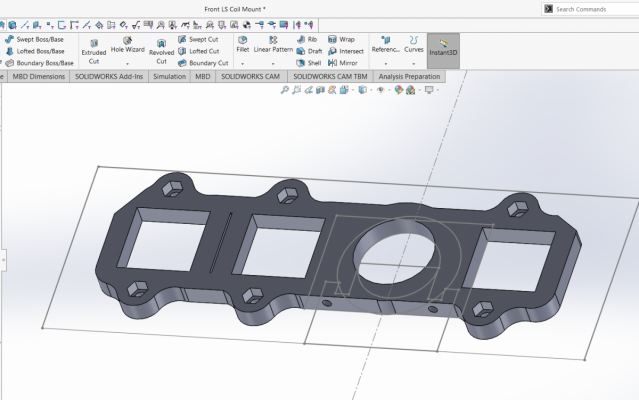 Mock up of front coil assembly with ICM interface. 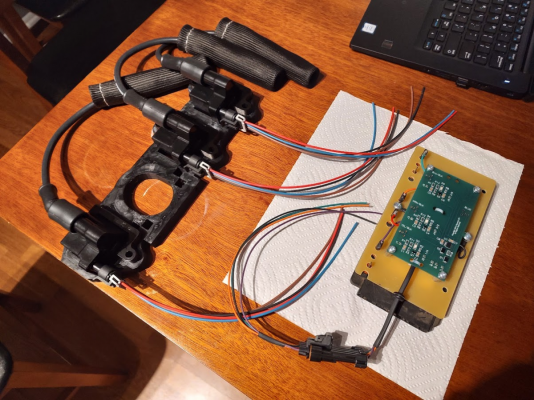 Rear was a pain... There is extra junk on my rear valve cover (hence TWO circular holes), plus I only have an 8x10 print area. 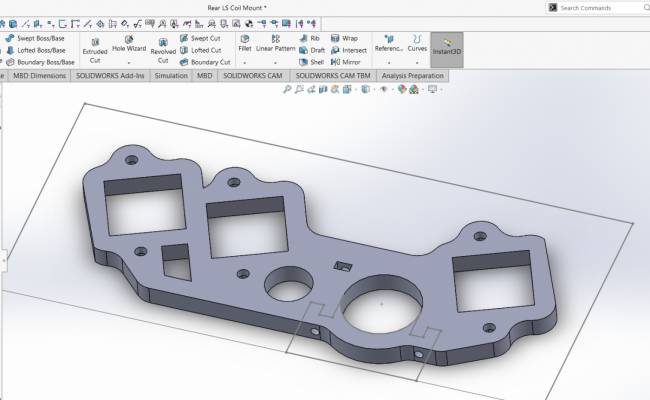 $5.70 in plastic for this part... Probably cheaper because the slicer assumes use of Prusa branded filament. 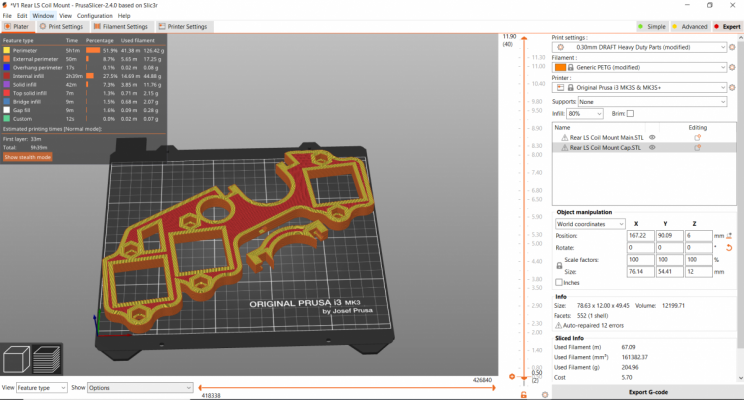 Man, what happened to the days of tuning with fuel pressure! Lol

Meant to include this: The sketch pattern feature stopped working on me so I gave up trying to keep it looking pretty lol... Hopefully it doesn't need much tweaking! 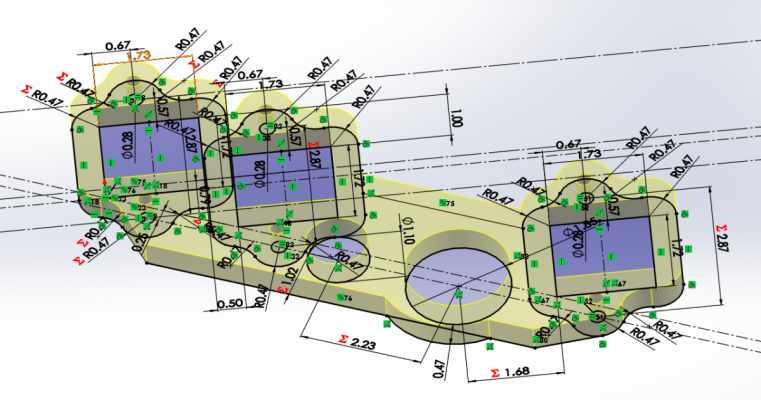 not having a bed bigger than 400x400 is what led us down the build a bigger printer rabbithole.... after buying the folgertech FT6 POS and deciding we could build a better printer blindfolded
TS
TS