Yeah I set mine up just on E85, I initially had some range anxiety but guys with similar combos say they get 150 miles per tank (15 gallon fuel cell).

But I might plumb in a flex fuel sensor at some point.

LikeABauce302 said:
Budget? What does that word mean? Is that where I eat ramen noodles so I can buy billet valve covers?
Click to expand...

BOTTLEFED said:
I represent this statement lol
Click to expand...

Pro Stock John said:
Who would tune it, Larry from ASSC?
Click to expand...

Brandon at Geared Up Motorsports in New Lenox. He will help me get a base tune in the car and from there I can handle any adjustments for track conditions, etc.
Reactions: Pro Stock John
•••

This car gives me a wet noodle
Reactions: LikeABauce302
•••

So do you have some fabwork left, and then you are ready for tuning?
•••

Pro Stock John said:
So do you have some fabwork left, and then you are ready for tuning?
Click to expand...

Yeah I still have some work left. I have to fab up the exhaust and the cold side still. I also have to finish welding everything. So far everything is mostly just tacked together. I think I'm past the hardest part though. Just making everything on the hot side fit was the biggest challenge.

I still have to run fuel lines, wire up and plumb the boost control, and figure out oil plumbing with a scavenge pump.
•••

I still haven't pushed this car into the Cal Sag, although I have considered it a few times. I ran into one minor setback, but I'm moving forward again. I had to cut out and redo the mid plate mounting tabs because I didn't like the driveline angle when I put the transmission in for mock up.

Last night I started making the driver's side exhaust. I'm just running the exhaust straight back into a pair of Borla XR1s in the stock location and dumping it before the rear axle. As much as I would like to run tailpipes, there's no way I can fit 3.5" over axle pipes with the anti roll bar I have. For the sake of time and ease of assembly/disassembly, I'm not going to make an X or H pipe. If it sounds like crap, I can later figure out a way to merge the mid pipes. From the little research I've done there's no benefit to a crossover mid pipe after twin turbos, other than it may improve sound. 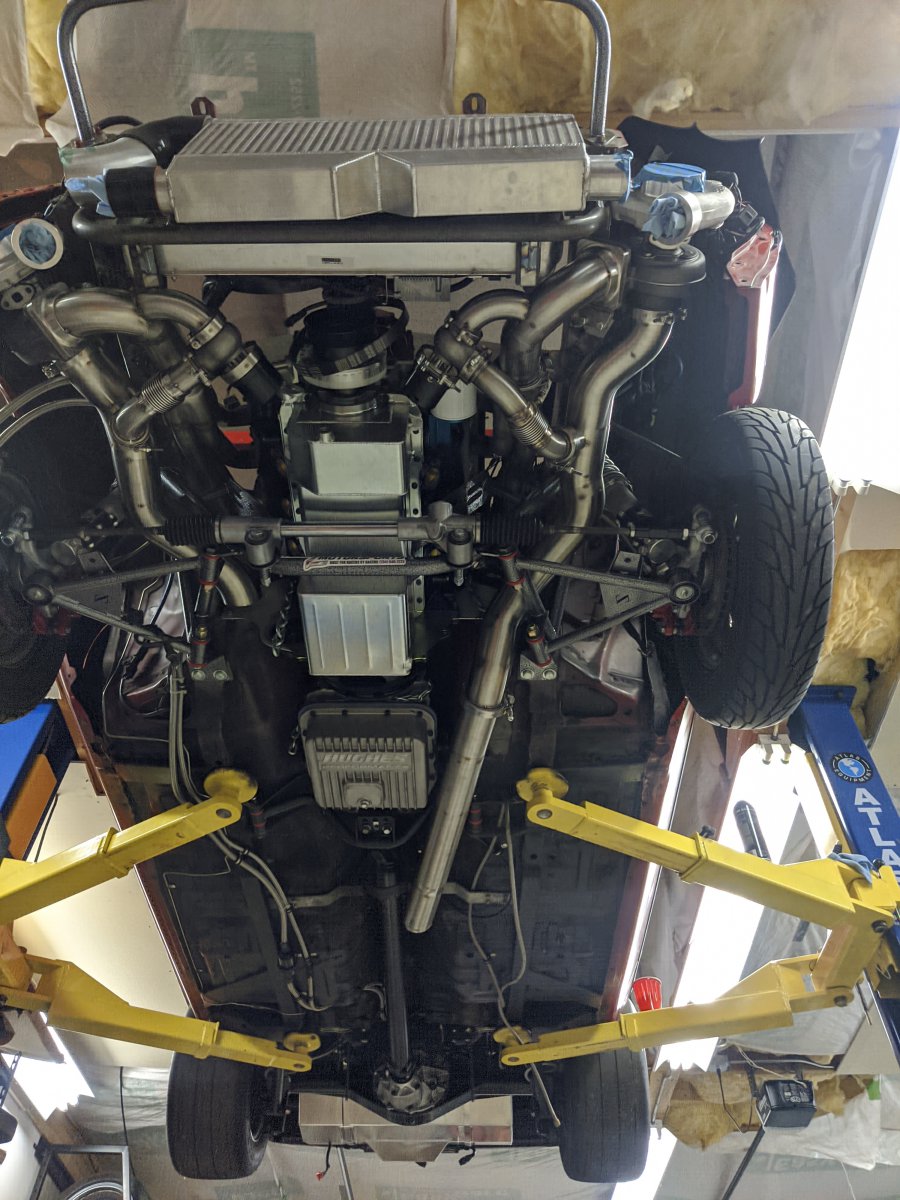 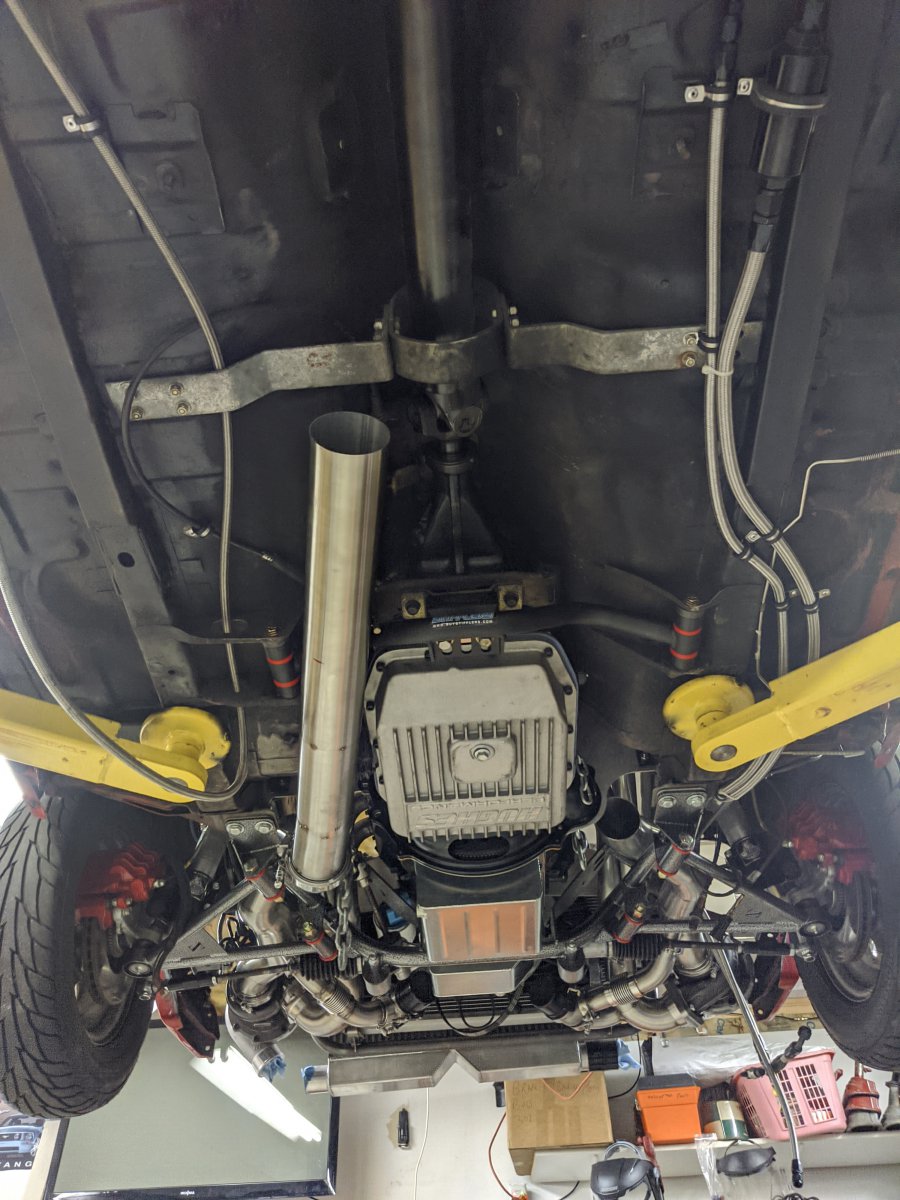 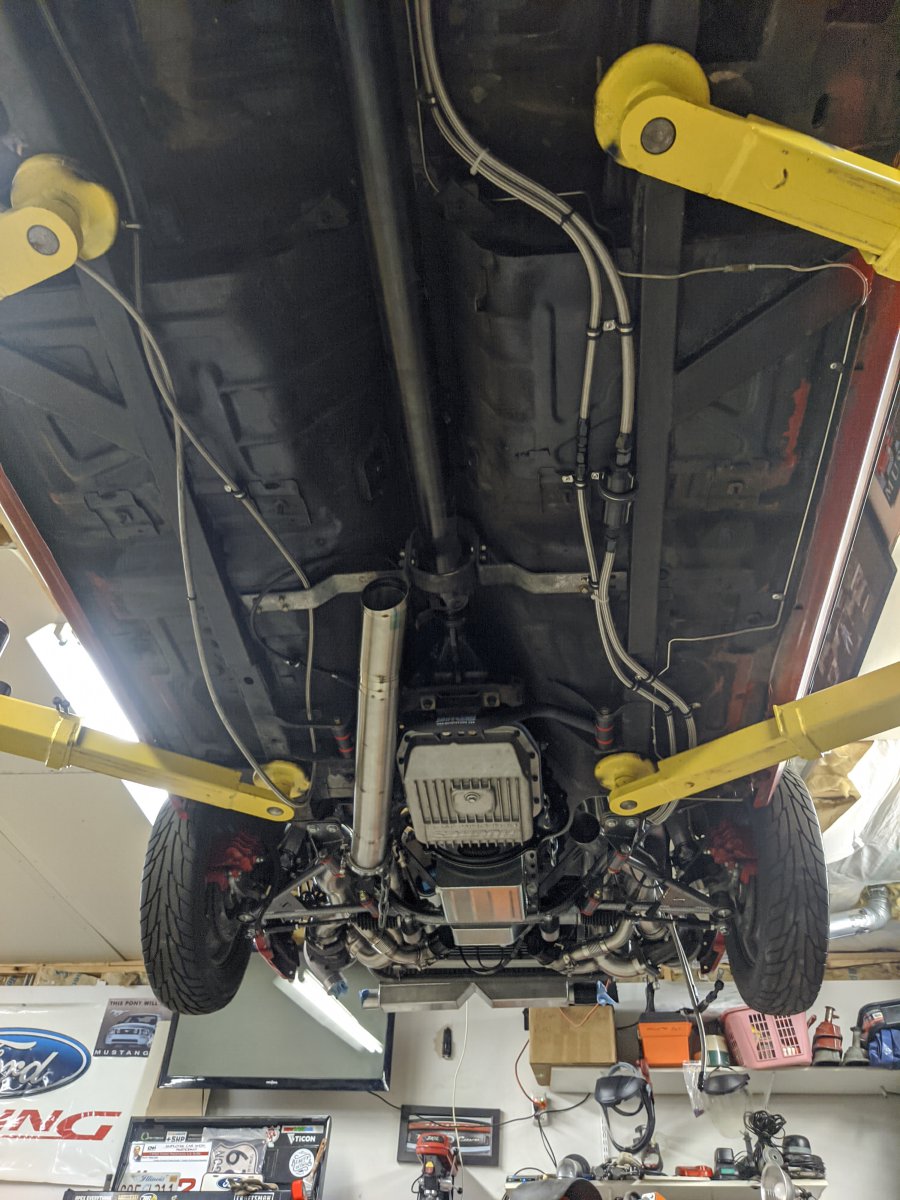 It certainly makes life easy. Getting a heavy auto trans in and out 3 or 4 times now wouldn't have been fun with jacks and wheel stands.
Reactions: Gav'sPurpleZ and Turbocharged400sbc
•••

How often do you plan to take the car to the track ? Or is this more street ?
•••

Gav'sPurpleZ said:
How often do you plan to take the car to the track ? Or is this more street ?
Click to expand...

As often as I can, but realistically it will get to the track 3-5 times per year. I'll be able to drive it on the street a little bit.

I mainly just like to build stuff. I took on this twin turbo project because I wanted to improve my fabrication skills and get more comfortable with TIG welding. I could have stuck with nitrous as a power adder, but I wanted to learn something new.
Reactions: Yaj Yak, IceCreamAssassin, Dr. Jimbo and 4 others
•••

You might be surprised how streetable it is, I have driven my '67 about 14 hours on the street since last fall. I figure that's gotta be 500 miles.
Reactions: Dr. Jimbo and LikeABauce302
•••

Pro Stock John said:
You might be surprised how streetable it is, I have driven my '67 about 14 hours on the street since last fall. I figure that's gotta be 500 miles.
Click to expand...

That was another big reason why I chose a twin turbo setup. I went with a somewhat mild hydraulic roller cam and kept compression around 9.4:1 so I can run 93 octane on low boost if I want to cruise on the street. I'd love to be able to cruise in it on nice days.
Reactions: Mr_Roboto and greasy
•••

I only tuned for E85, my friend pointed out to me that he gets 150 miles to tank (15 gallons). I top it off before I drive around. But if I was building the fuel system today I'd add in a flex fuel sensor.

Cool build I bet it will be very streetable.
Reactions: LikeABauce302
•••

Awesome Matt, can’t wait to see this thing alive! Setbacks are part of the game, please no pushy into CarlSag

I am sure it will sound delicious even with just straight pipe.

Exhaust turbines are the best mufflers ever
Reactions: Yaj Yak, SaturdaysGS, LikeABauce302 and 3 others
•••

I finished the driver's side exhaust last night. I had to order more tubing for the passenger side, but hopefully I'll have that done within the next week or so. 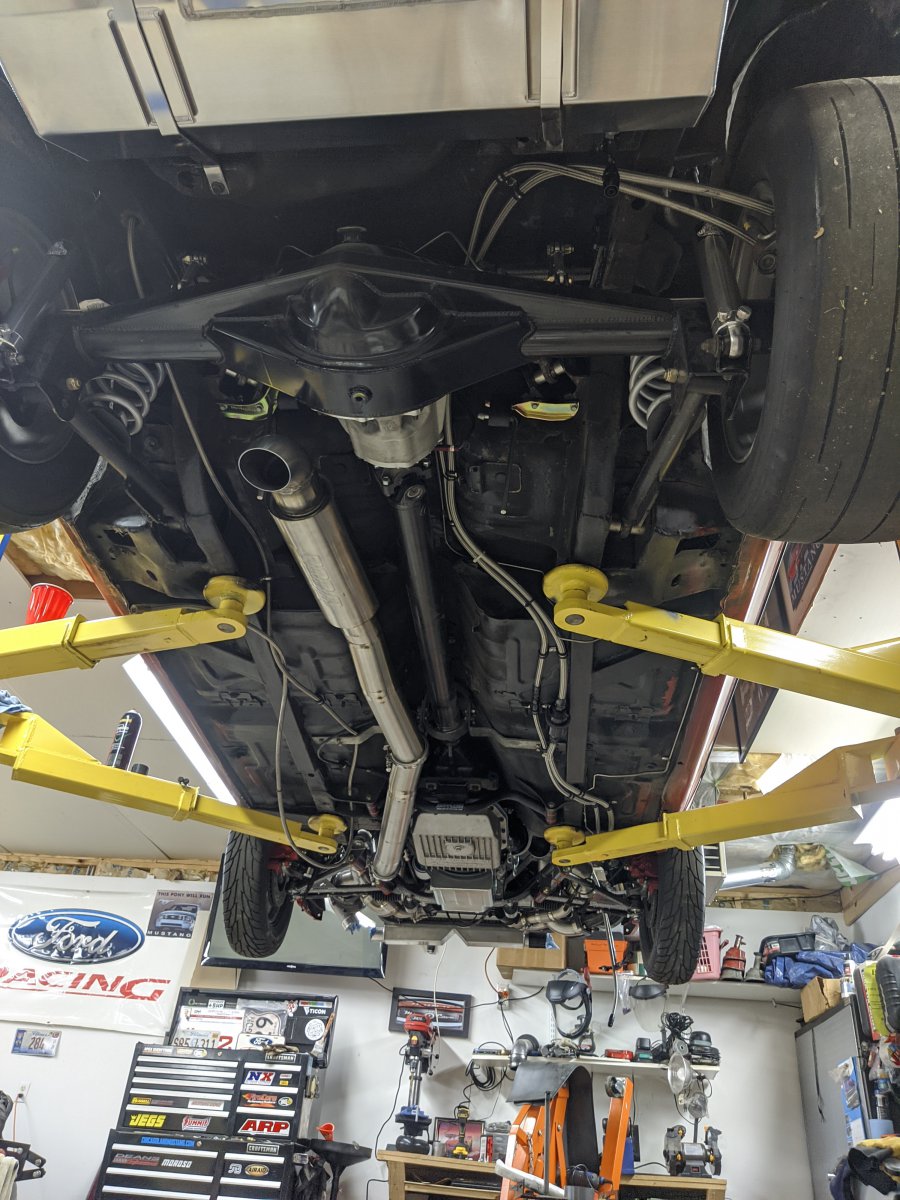 Hot side and exhaust fab is complete. Time to start fully welding everything. I'm glad to be done buying stainless steel for now. The weekly orders to Stainless Bros were really nickel and diming me.

I'm really happy how this came out for my first time doing any major fab work and it's been rewarding seeing my welding skills improve. 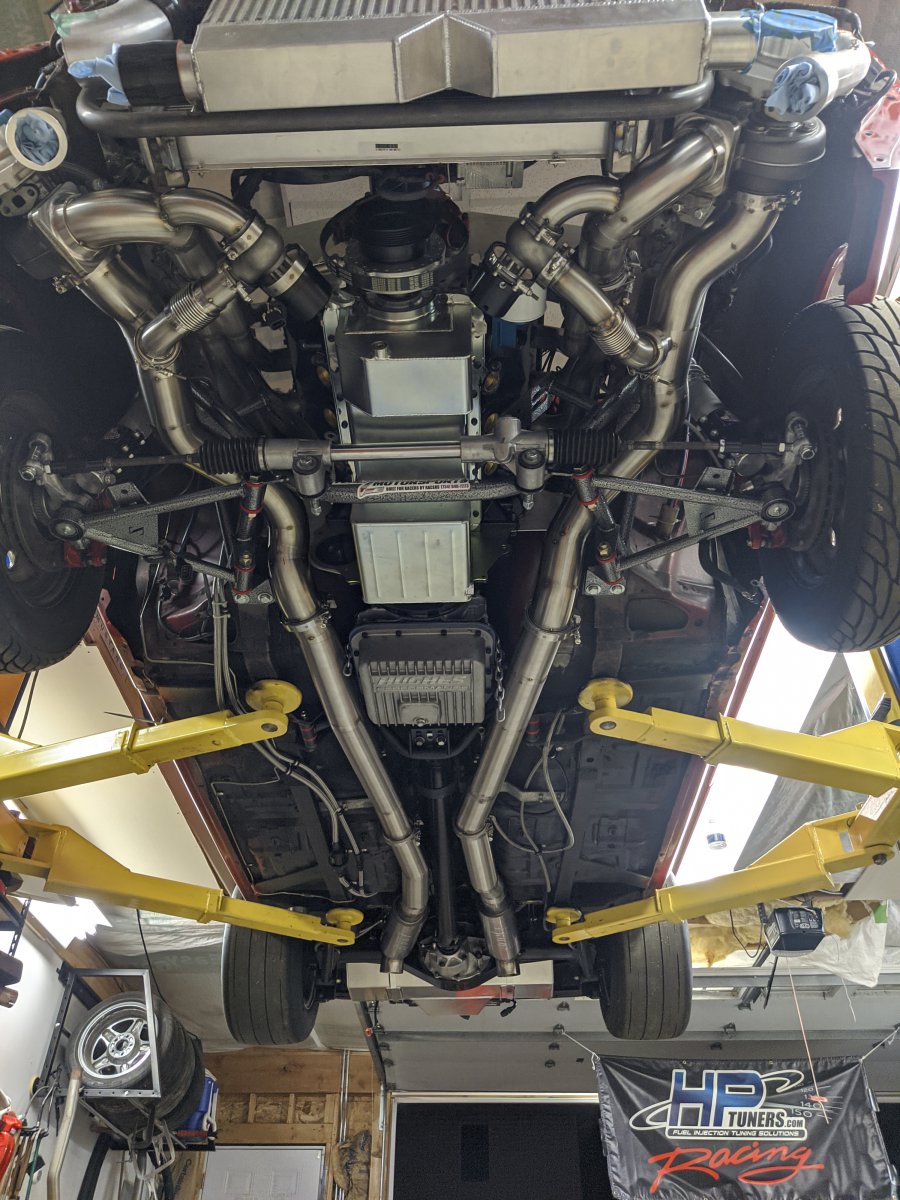 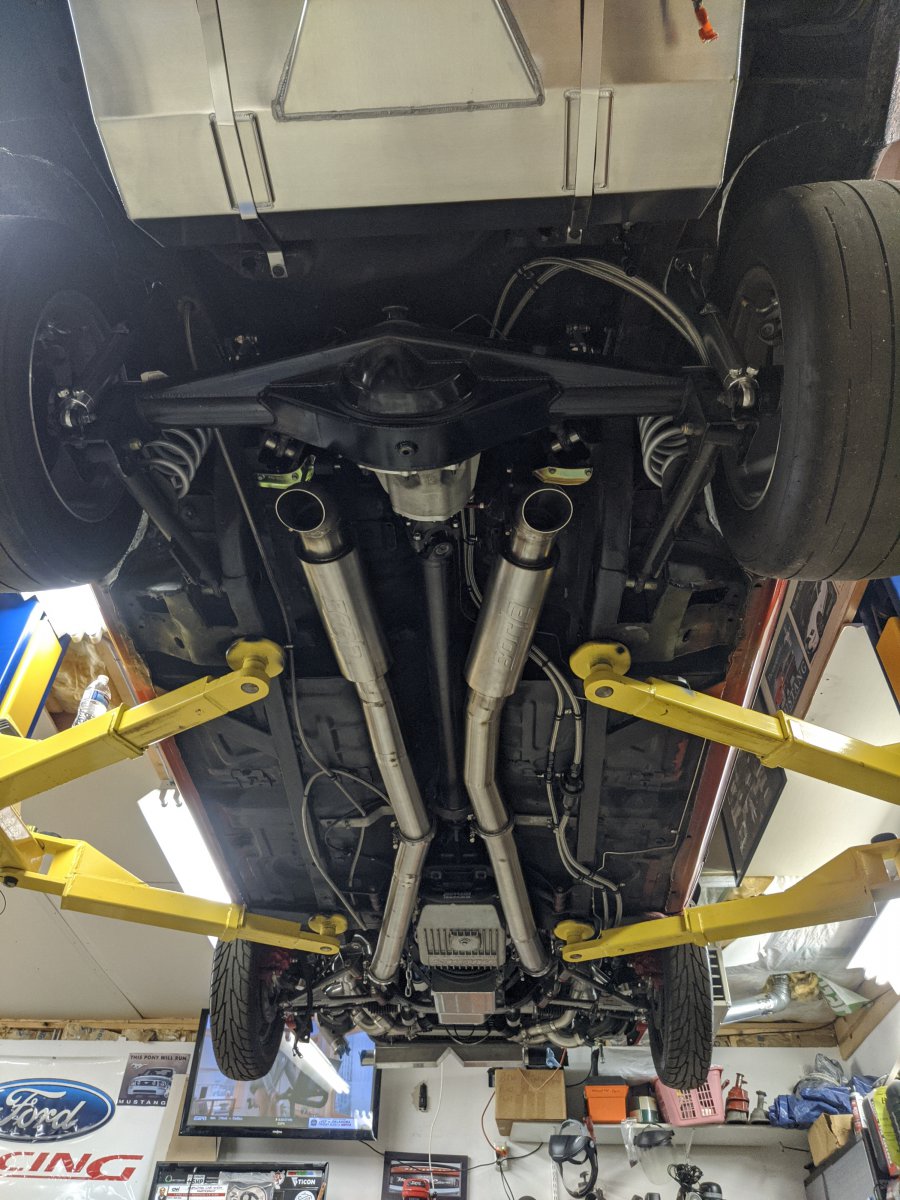 West of the Mississippi