I do remember being told about the end ones first. One thing that I think helped me the last time I did mine was if I saw it start to push the valve down I would stop and leave that one alone until I rotated the crank some to get it off of the base circle. I'm not sure I went 60⁰ or anything but by the time I turned the crank 3 or 4 times they were all tightened down evenly and seemed to work as they should without making noise even with the chipped piston.

What about your pushrod length? One of my motors liked the 7.00s and they rattled in the other and it wanted the stock 7.05s. I really have no explanation why or that I even did it right at the time but obviously I wasn't measuring them like I should've either.

Otherwise I say boost test it with a good 10 or 15 psi make sure your good there before gettin too excited with much else. What's your wideband doing? And also what's wrong with your prolink? The way ive got mine to work is by logging signal voltage on whatever particular wire I have my signal plugged into be it blue or red and then transforming it to the data I need it to log, so far it's worked great
OP

Well this didn't explain much. I guess I'll once again reground my pro link and make some logs. I'm about ready to weld a ring terminal to floor. I'm sick of these wideband issues. 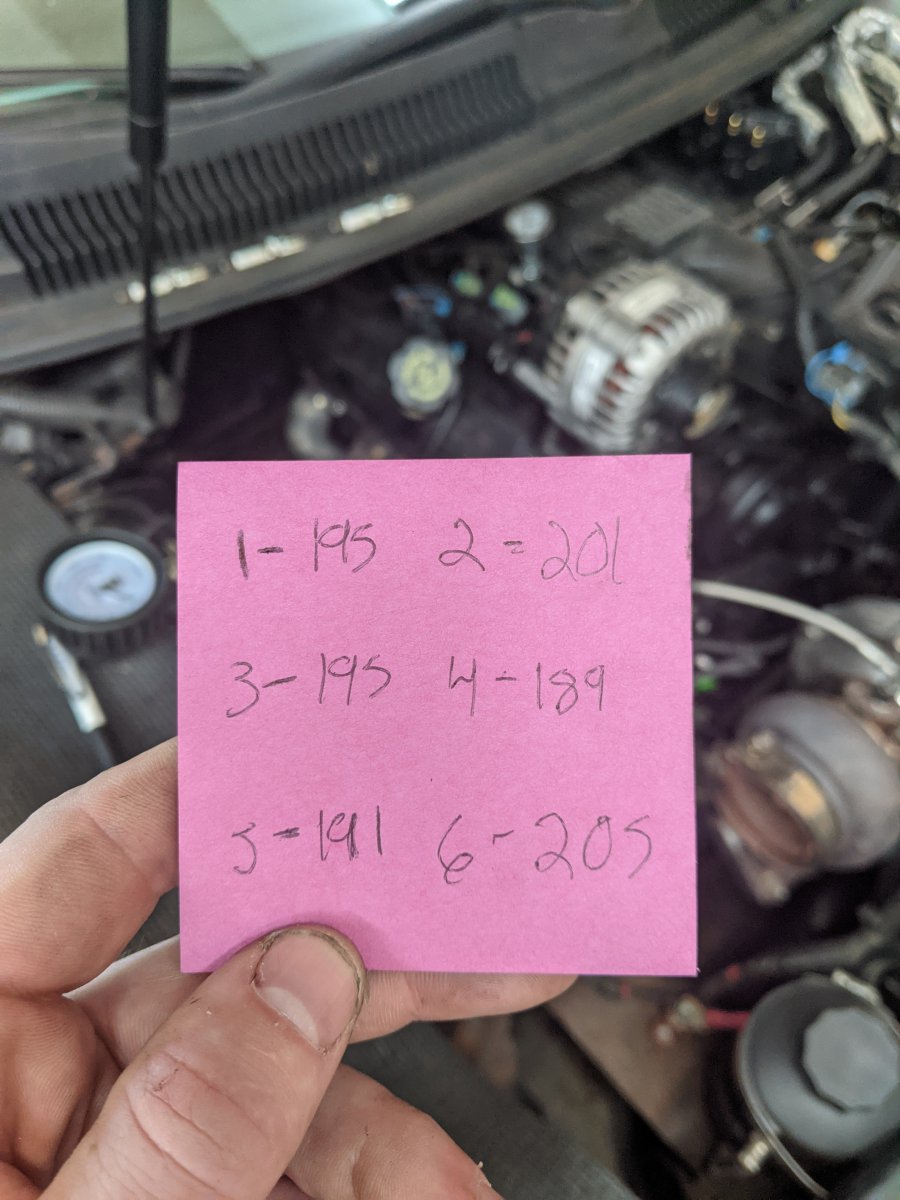 A while back I remember seeing guys having issues with the aem gauges themselves and aem replacing them maybe? I can't remember what your running for sure but maybe that's where it issue is?
OP

sktchy3.8 said:
Dude my prolink is hooked up with just wires twisted together maybe wire nuts if I'm feeling fancy and I never have issues with it logging

A while back I remember seeing guys having issues with the aem gauges themselves and aem replacing them maybe? I can't remember what your running for sure but maybe that's where it issue is?
Click to expand...

I can usually wiggle wires and make it bounce a few points so I know my wiring is trash. I just ripped it all out and decided to start over with alligator clips. Unfortunately it hasn't gotten me very far. The really strange thing is that I was logging a believable reading with the car off and then it went to a flat 7.3:1 as soon as I started the engine. No re-grounding or wire shaking would make any difference at that point which doesn't make any sense.
OP

The flat lining at 7 with the engine running is repeatable. I don't get it.

What about the sensor itself maybe? I wouldn't see anyway the 7 could be accurate my car gets big mad when it tries to idle in the 10s
OP

sktchy3.8 said:
What about the sensor itself maybe? I wouldn't see anyway the 7 could be accurate my car gets big mad when it tries to idle in the 10s
Click to expand...

It's not real because it doesn't move. The sensor is fine because the gauge displays the real deal.

I figured it out. It's that damn OBD splitter. I hate that I can't use HP and Aeroforce at the same time. I guess I just need to forget about it and move on. It's not really necessary to see anything without working knock sensors anyway. I guess I can start looking at the fuel system because its running lean even just idling in the driveway. 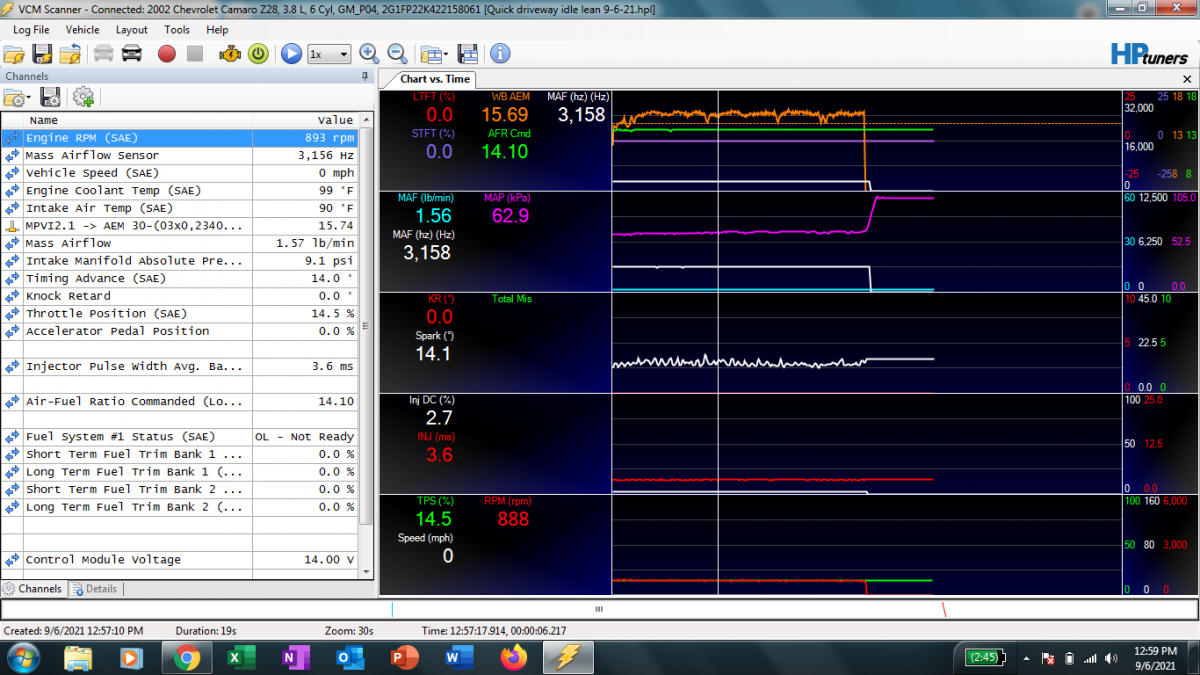 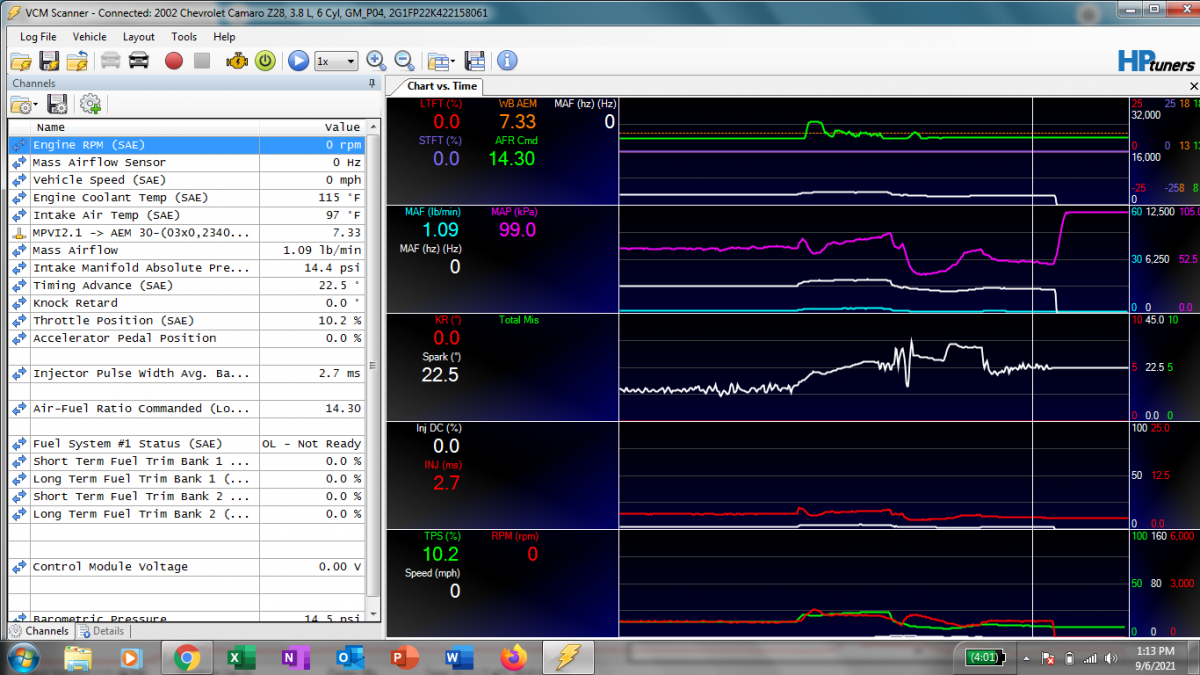 I said "screw it." I'm not bothering with diagnosing this trash. I started rewiring everything I added in the console and dash. While I'm in there I'm going to replace the AutoMeter boost gauge with an AEM controller because the line is kinked in several places and I don't want to come back here. I'll just be using it as a gauge until I get the car to run right though. 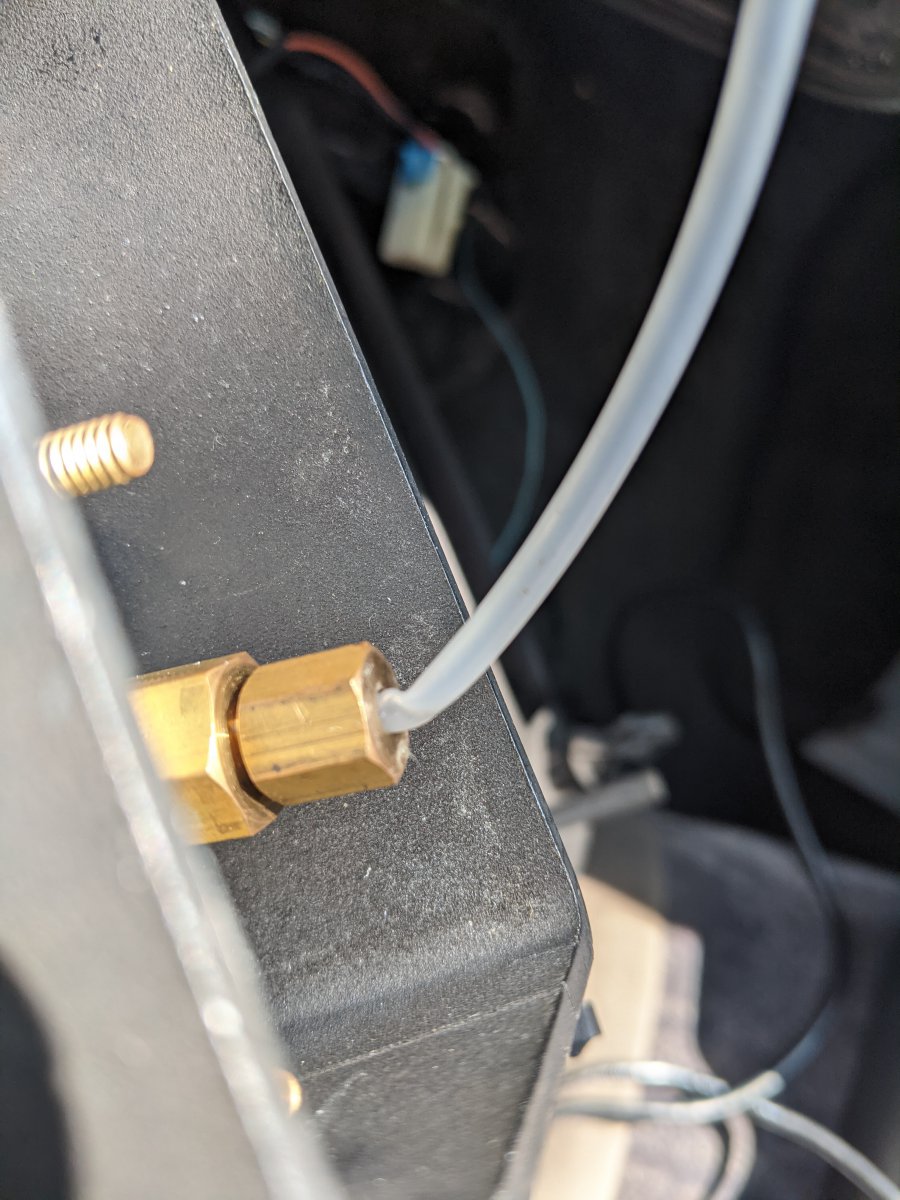 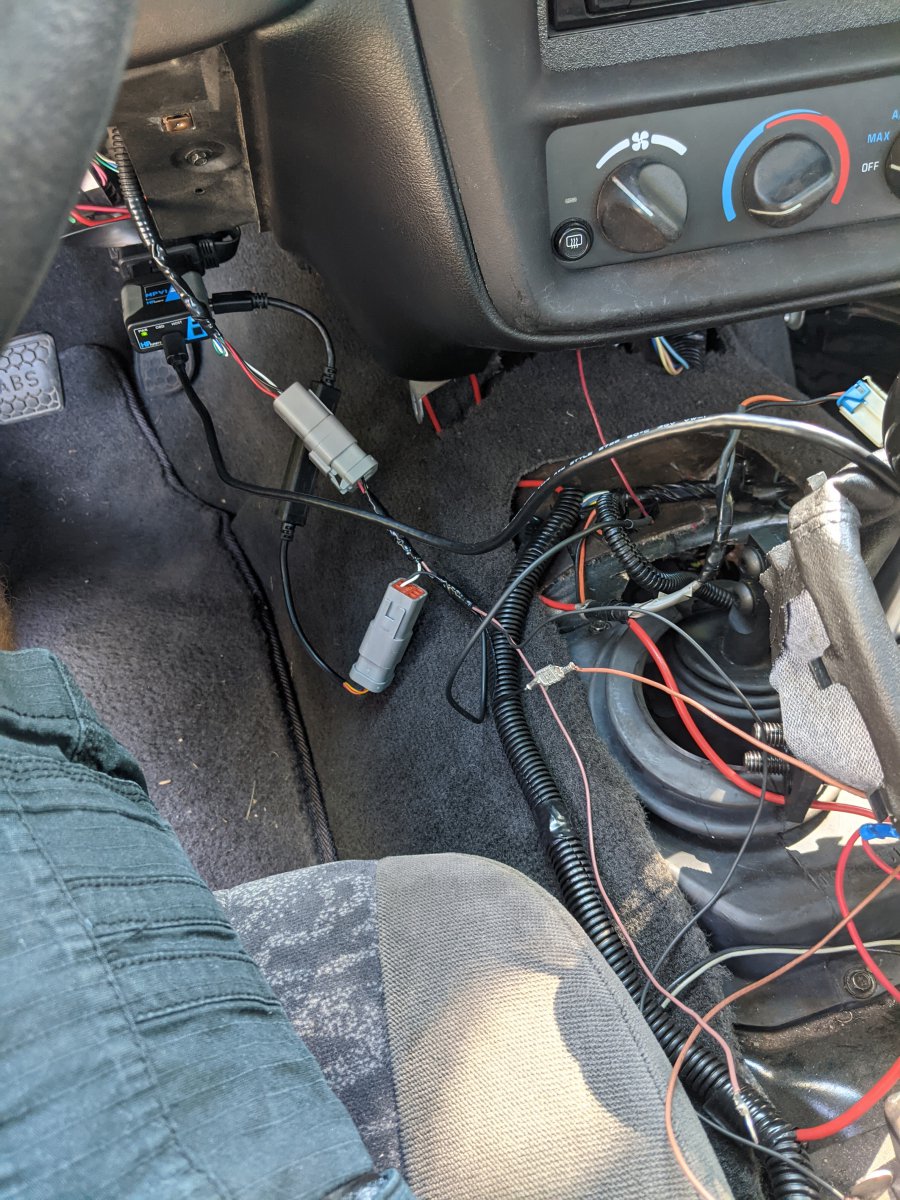 The electrons under my skin are crawling right now

Turbocharged400sbc said:
The electrons under my skin are crawling right now

I get really anxious every time I'm in there. I'm better than this. Time to fix!

Yaaaa splitters suck. Pisses me off cuz I can't use the obd2 for rpm on the rollers and scan at the same time because its way more accurate by obd2 than the capacitive pickup
OP

I made a "drawagram" as I'm calling it. A true diagram would have made the layout, connector types, and actual logistics a bit tough to plan. 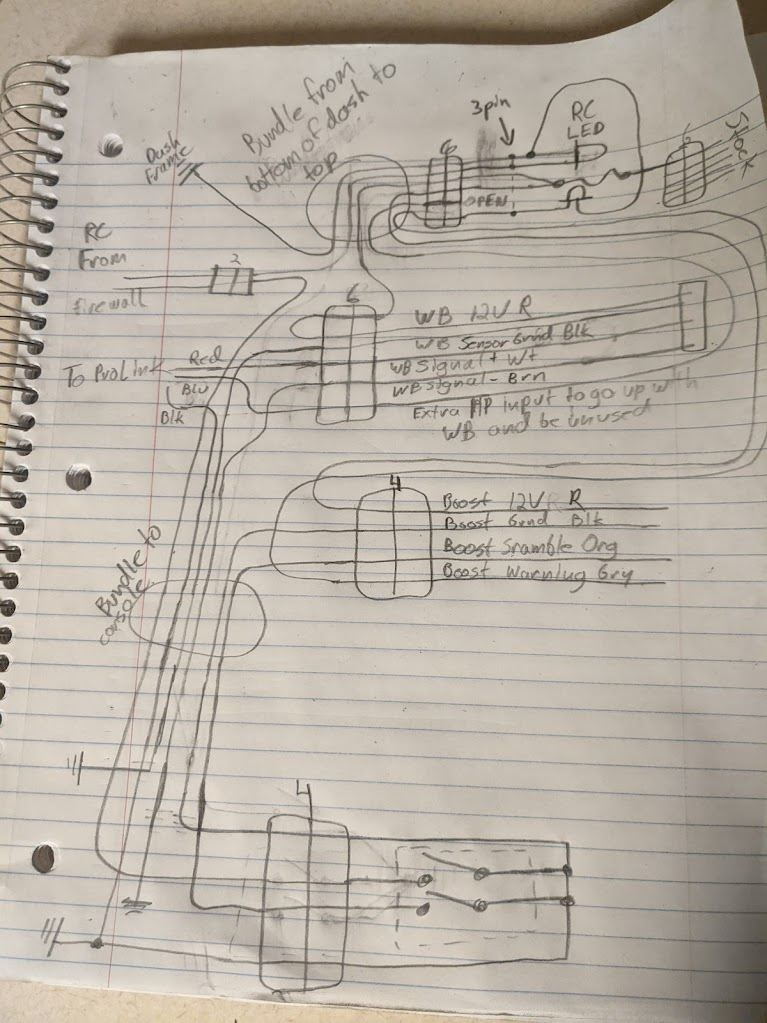 There are a couple things for which I need opinions though. First, I'll clear up the mess above a bit. I have four devices that I deleted and want to re-add. They are the wideband, boost gauge/controller, line lock, and HPT Pro Link. Things get messy because some of this stuff is pretty sensitive and needs to be tied together. The line lock already has it's own slick hot at all times power source. The boost gauge and and wideband do not, and AEM suggests fusing each of them at 5A. The boost controller has some fancy features which I do not plan to set up right away, but I want those options to be available in the future via simple programming. Therefore, a switch for scramble boost in the ashtray, and another LED for overboost warning in the bezel will be added.

As far as power goes, do any of you find it necessary to have two separate fuses for the gauges? Space behind the gauges is pretty plentiful, but the switched 12V power source I'm using is from a stock unused connector (base models FTW). Any fuse I add to this circuit is also going to be fused closer to the battery, and I just can't imagine even these fancy AEM gauges drawing much current. If you all think a second fuse or a different switched power source would be wise, I'll probably have to buy some more stuff.

As for grounds, I used to have four of them in three different bolts, and it was a friggen mess. I now need six. The wideband sensor, analog output, pro link, and boost gauge need grounds and they all may be sensitive to ground loops. The roll control and both LEDs could probably be grounded together, but they'll be so far apart that it wouldn't make sense.
Six separate grounds is going to be a new mess unless I use something like this. Waddya think? Is it still a potential ground loop that can send noise into my sensor circuits? 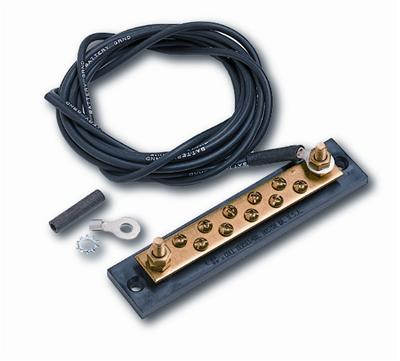 I think you may be overcomplicating it. The wideband will pull the most because of the sensor heater but otherwise just put em on switched power wether you prefer key or a flip switch or whatever get em grounded good and send it. Maybe there is somethin to the ground thing but gauges havent ever been somethon I've had to fight in mine

I've only just used a single fuse for all my gauges. I usually just ground them all together too. But sometimes those sensitive grounds get picky.
OP

GTPpower said:
I've only just used a single fuse for all my gauges. I usually just ground them all together too. But sometimes those sensitive grounds get picky.
Click to expand...

How high would you recommend fusing them?

v6buicks said:
How high would you recommend fusing them?
Click to expand...

You can buy a fancy fuse block on Amazon if you want. Otherwise parts stores sell the add-a-fuse circuit or an inline fuse.

I have a holder that will work nice, but I'm moreso referring to fuse rating. For two gauges that are supposed to be fused at 5A I would think 8? Idk

I've had both boost and wideband on a 5 Amp without issue. There's hardly any Amp draw except for the sensor heater circuit and my portable wideband proved even obd2 power is plenty for it

Yeah, you can tie them all on a 5a circuit. I don't think they even draw 1a a piece.
OP

The ground bus bar is coming tomorrow. Deutsch connectors, split loom, an assortment of wire, and my well thought plan are bringing this all together very nicely. It's just a long process when you actually take the time to make documentation for future reference, cut the wires to a proper length, and tie it in cleanly with other circuits.

My least favorite part is that it often looks like you've done absolutely nothing until it's actually done. Here's after a few hours of work. 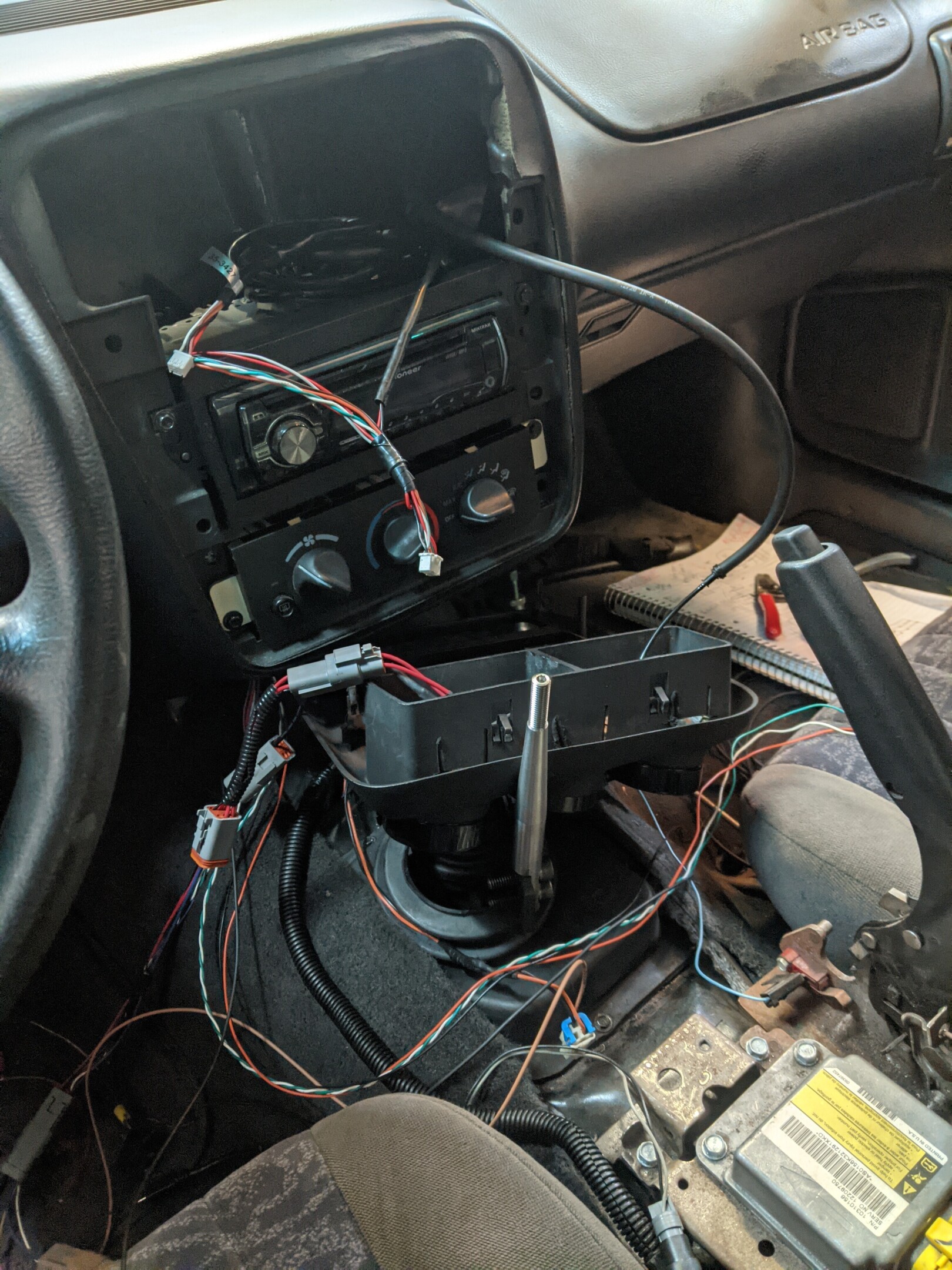 Keeping Things cleaned up and nice is so worth it tho. Part of why I'm dragging my feet is wanting to clean up my wiring harness and everything under my hood and make it look as good as I can. less problems go along with all that too I'd imagine
OP

I messed up really good yesterday. I was soldering the LED wires and managed to drop hot solder directly into my wideband connector. Of course it was the tiny one too. I haven't had much luck getting it out yet. I did get a wire hot enough to turn it into a ball, but it wants to stick to the pins rather than the wire. Cool. Maybe the desoldering station at work will help. 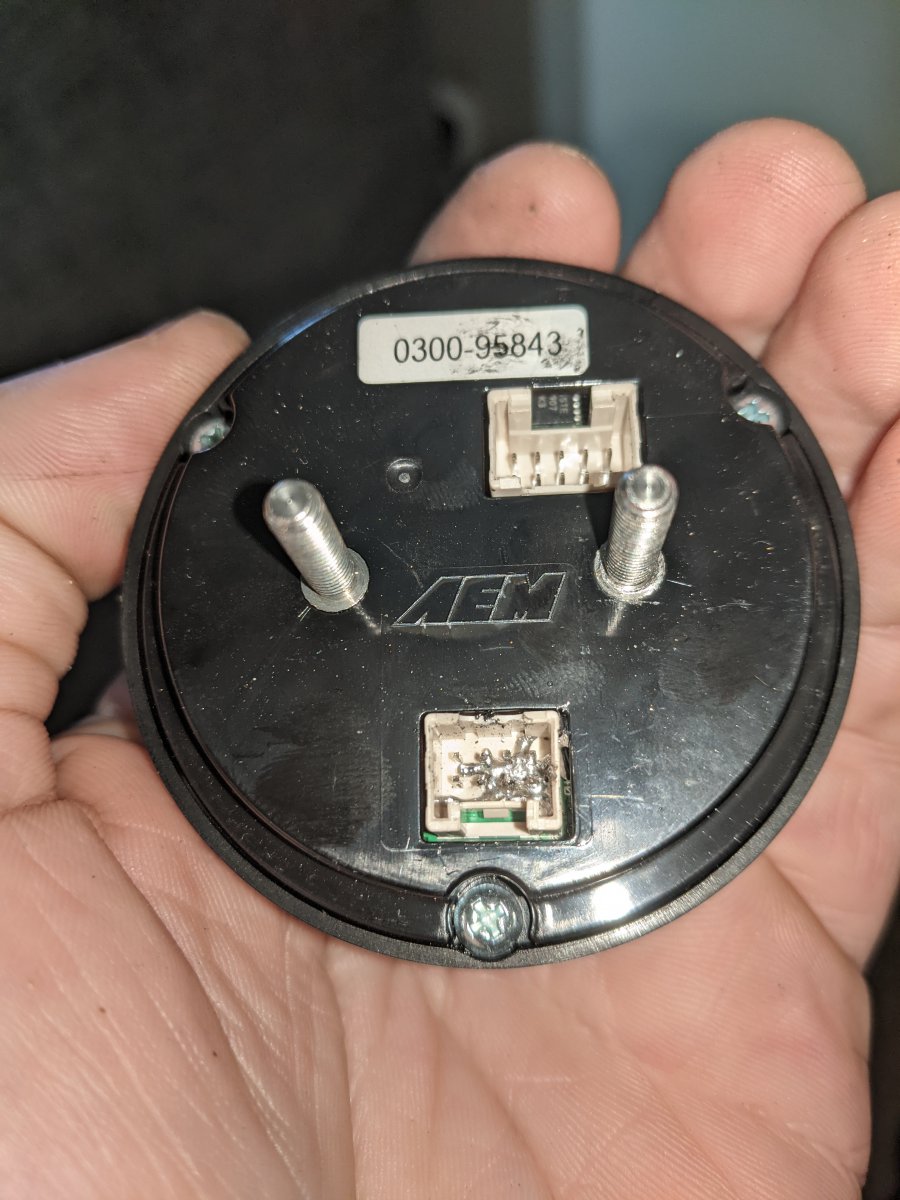 The reason I was up there anyway was because, I discovered a flaw in my plan. The line lock LED wasn't switched by anything. It was on all the time. Now I'm redoing all kinds of stuff to fix that. I also failed to notice that the boost warning LED is ground controlled so that needs to be flipped and powered. Fun times. The layout is looking pretty cool though. 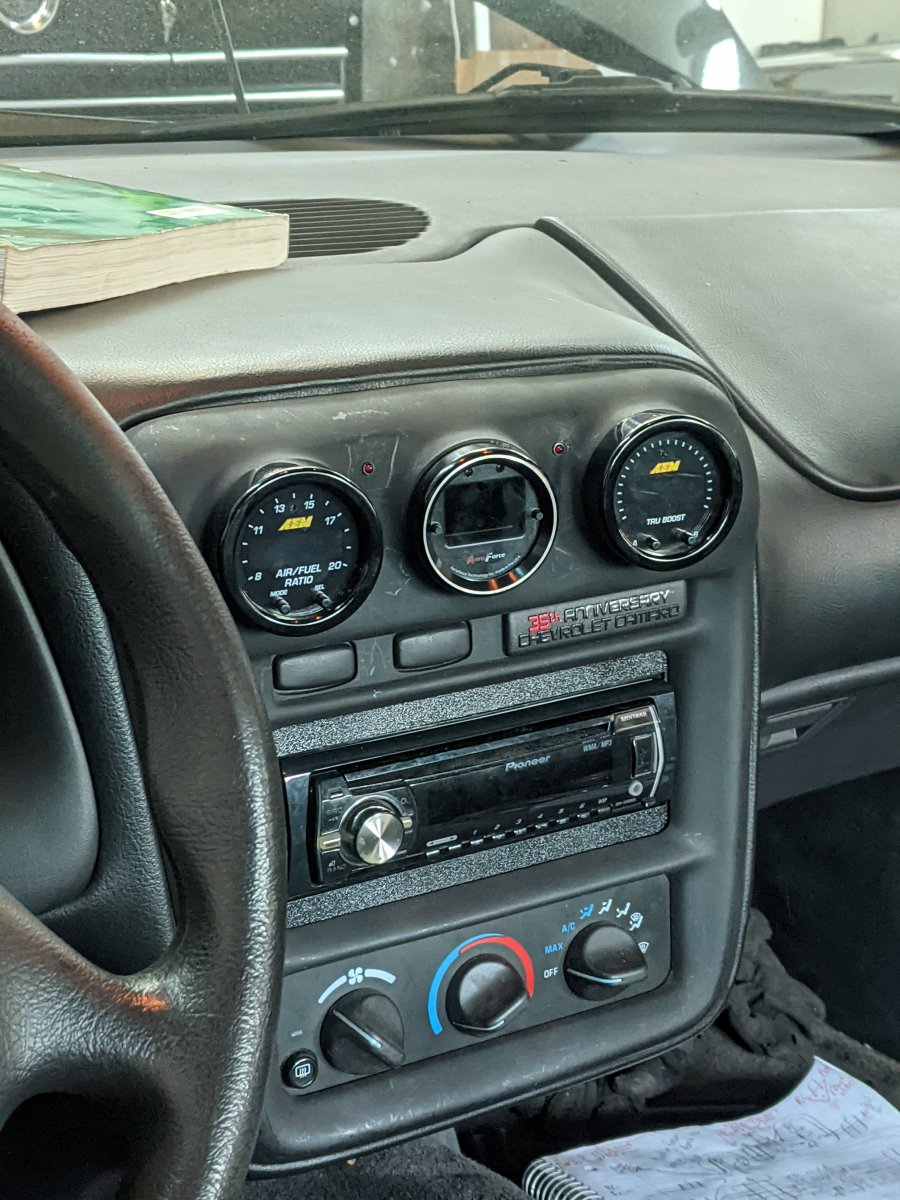 I fixed all my fuck ups except for the wideband solder blob which is keeping me from installing the gauge pod again. I figured that I'm kinda stuck until until I go to work or get my ashtray switch panel, so I decided to finally paint the gauge pod. They are shipped in a primer that looks almost identical to the original plastic color, but it gets scratched really easily. All the in and out from wiring new stuff and drilling holes for LEDs took its toll, so I shot some low gloss black on it. Something flatter probably would have been better, but I suppose I can change it up later. It'll certainly be better than it was! 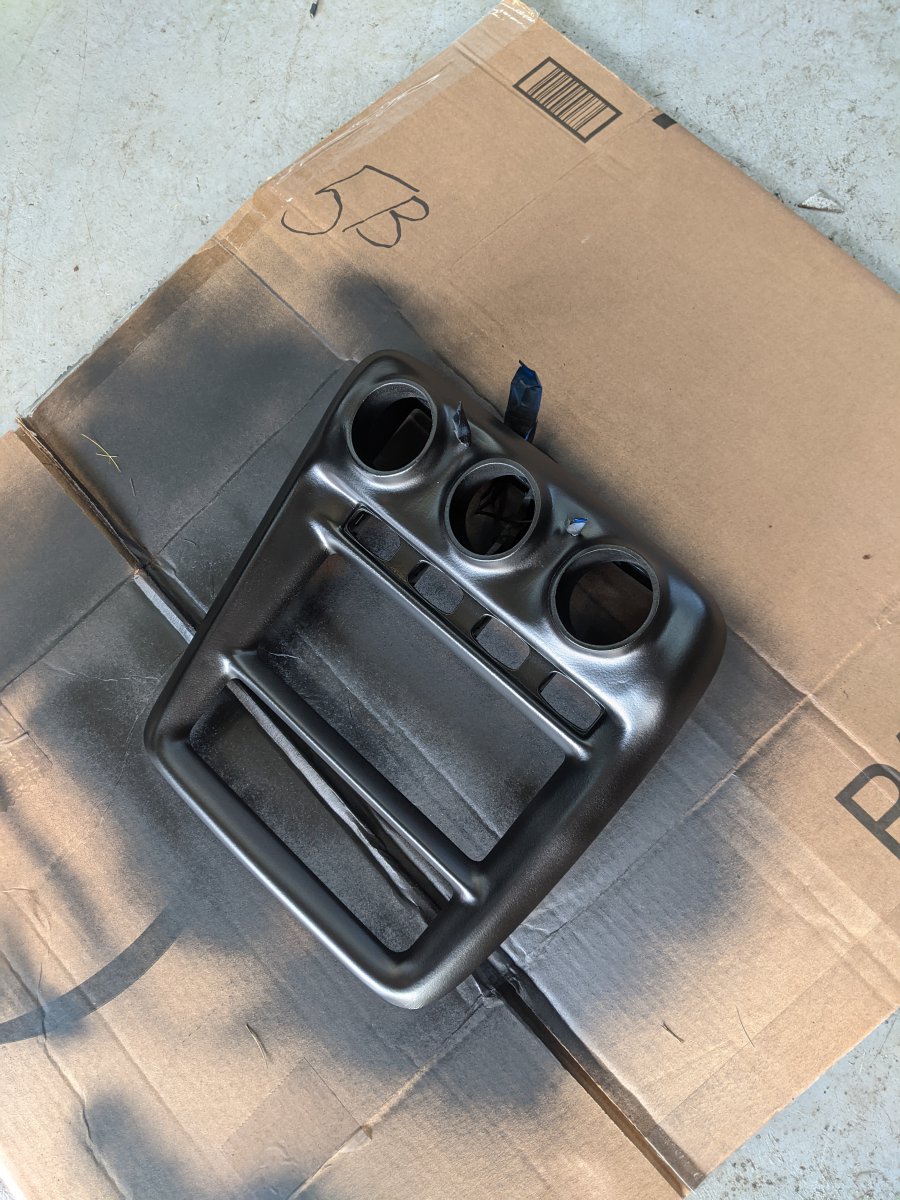