Yes. I have decided to become a BMW M car knob. And yes, I know it's not REALLY an M car, so at least I still get to piss off all the M car purists who don't believe there should be an M on this car. (Or 17 M's, as the case may be. I've counted

To begin my knobbery, I shall provide a brief synopsis of the car, for the plebs that are unaware of what they're looking at. A few years ago the 2 series replaced the love-it-or-hate-it 1 series coupes as BMW's smallest car in the lineup. It got a complete redesign to make it fall more in line w/ the looks of the 3 and 4 series. It really does look like a mini 4 series. Your early options were a 220i or 228i, which had a 4 cylinder turbo engine, and were boring.

OR. You could go for the M235i. At the time there were no announcements about an M2 model, so this was the most M model you could get for the 2 series. What you got, roughly, were redesigned front and rear bumpers, better wheels and tires, larger M sport 4 piston/2 piston brakes, adaptive suspension, that wonderful M steering wheel, and most importantly, a proper turbocharged straight 6 engine that made 320hp and 330tq. Given the 235's small stature, (relatively) light weight, and near perfect 50/50 weight distribution, there are many who would actually liken this car to a mini e46 M3.

With that out of the way, the car i purchased is a 2014 with a mere 15k miles on it. I found it at CarMax of all places

and they were asking a very fair price for it, so it piqued my interest. I'd always been kinda interested in these cars, but never really seriously looked into them. I started watching every video review i could find on youtube, and it didn't take long to figure out this is a car I would like to own. Went and looked at it at carmax, drove it, and found that reviews had not been overexaggerated. I offered up my ST as a trade, they gave me what I thought was a pretty fair offer for a trade in, bada bing bada boom, you guys know how car deals work, the ST is gone, and this is now in my driveway. 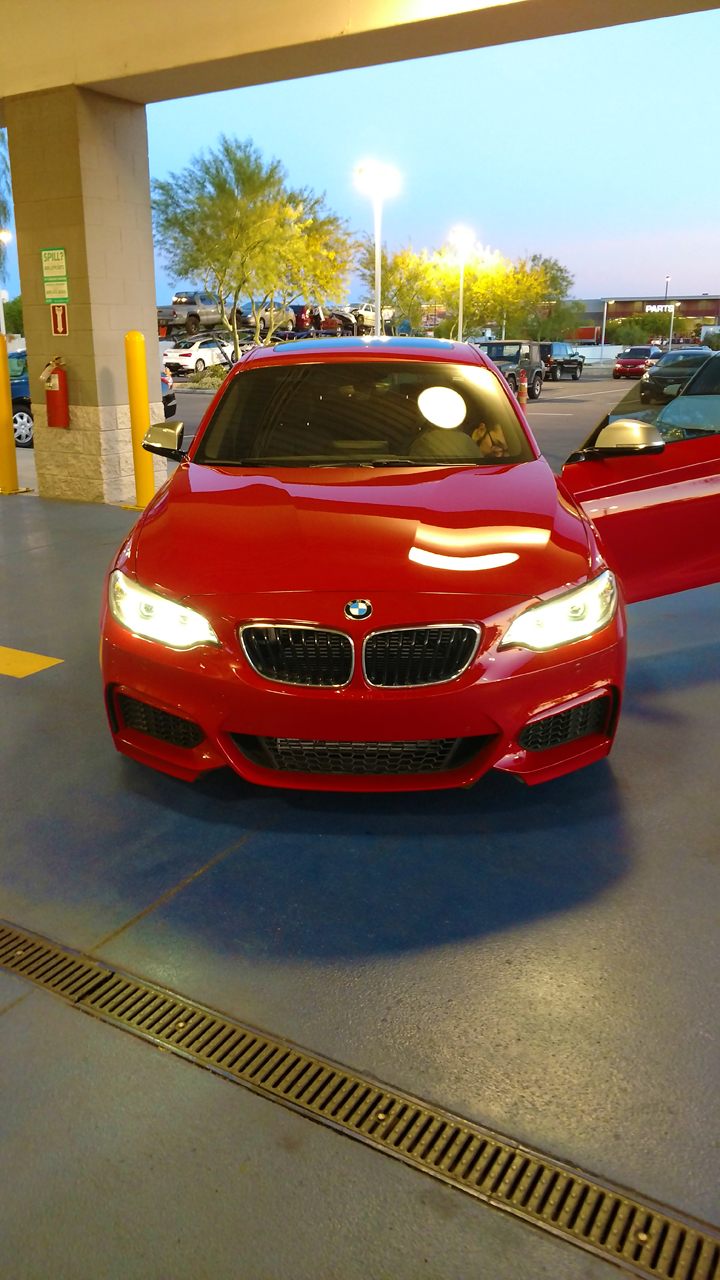 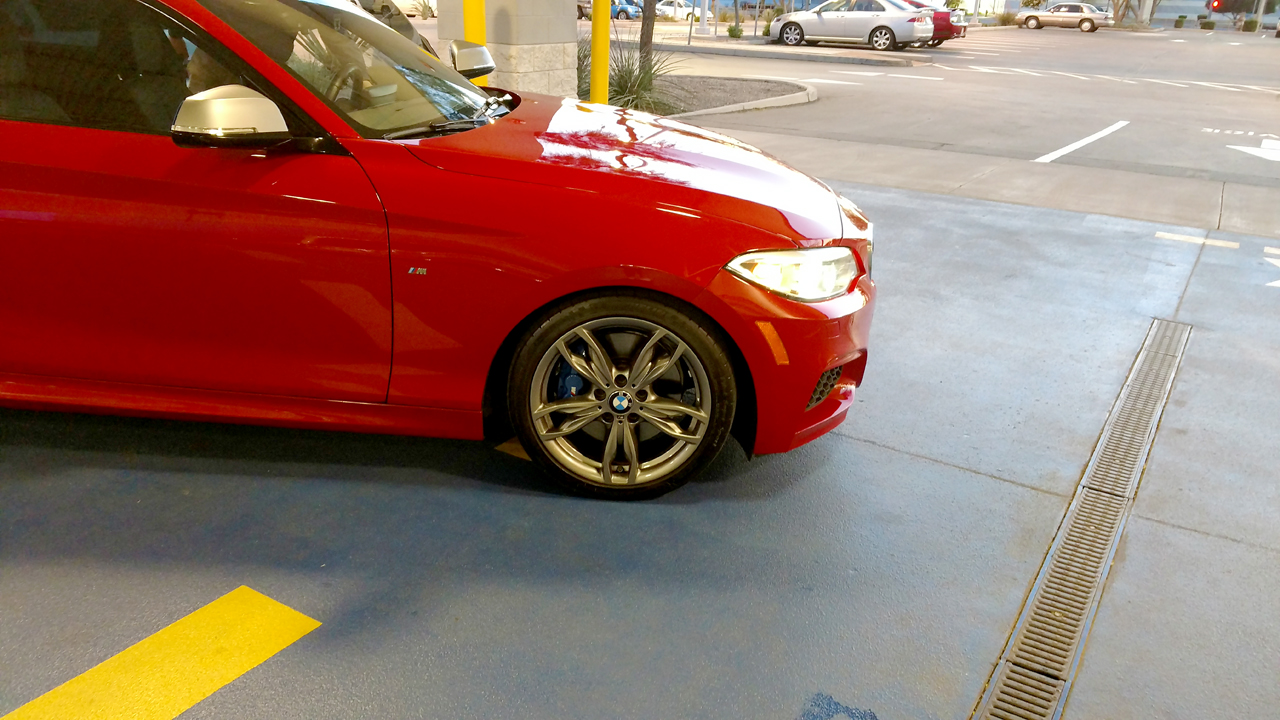 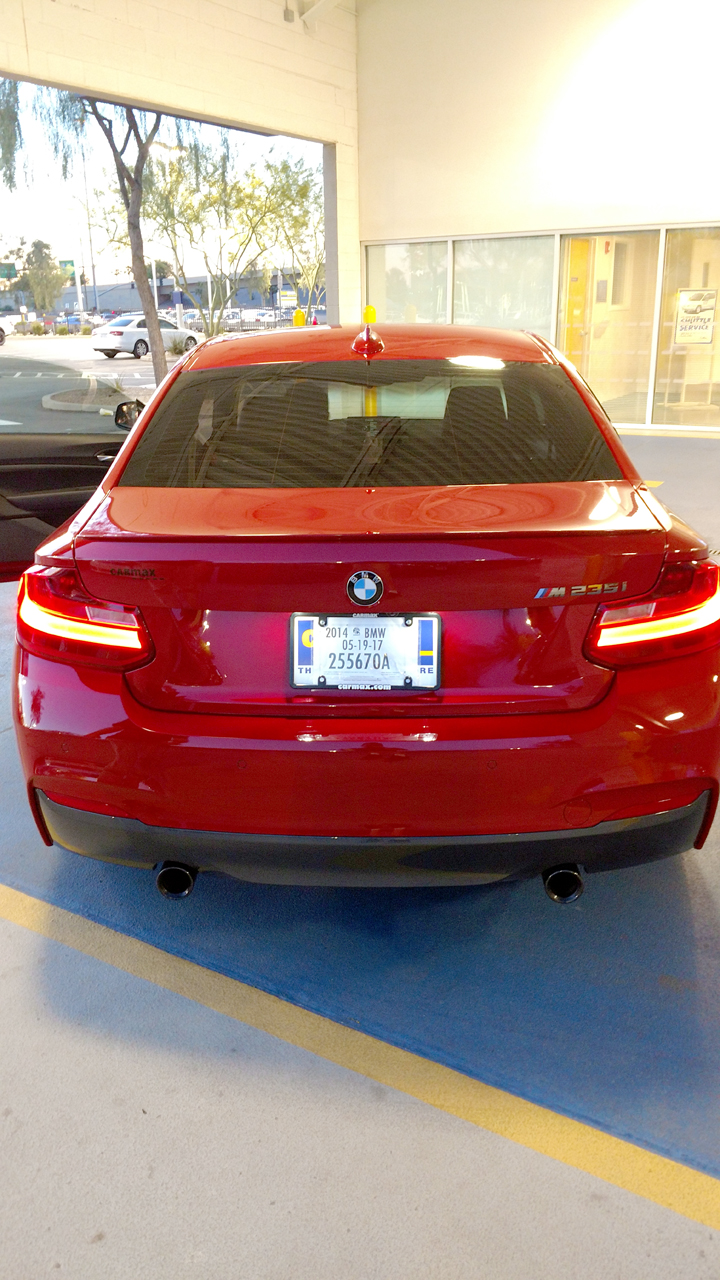 This morning at work 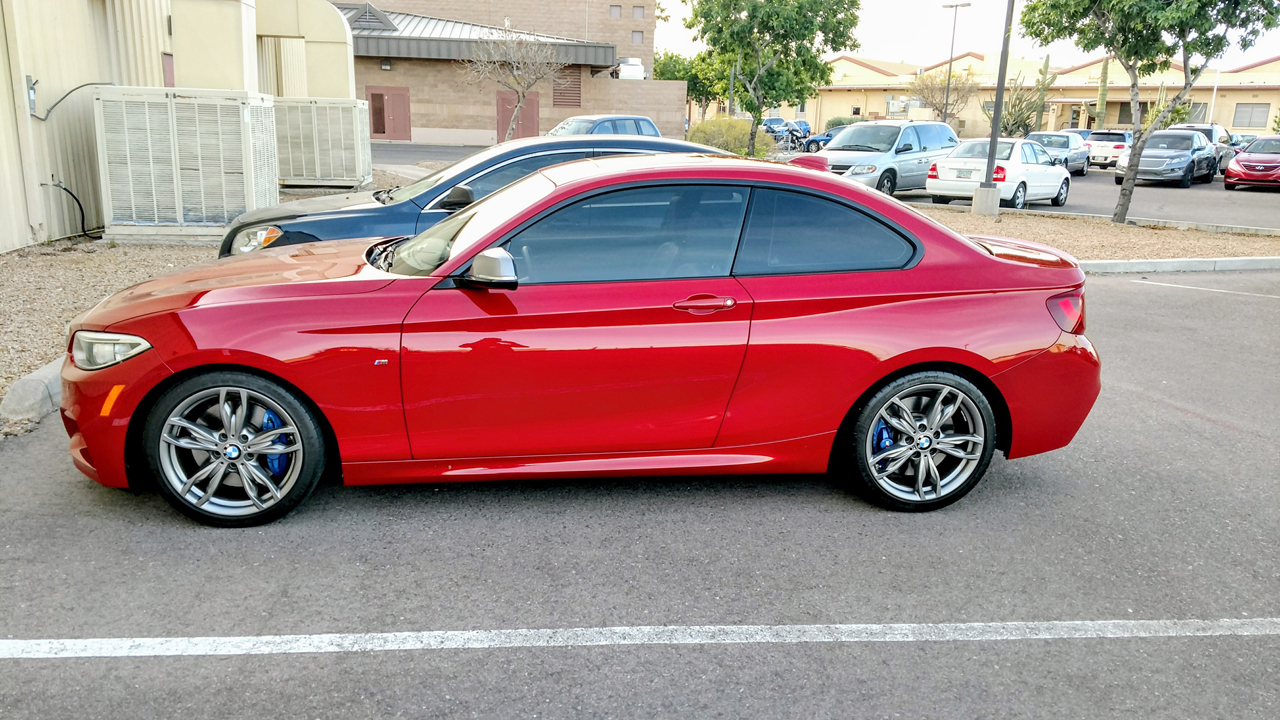 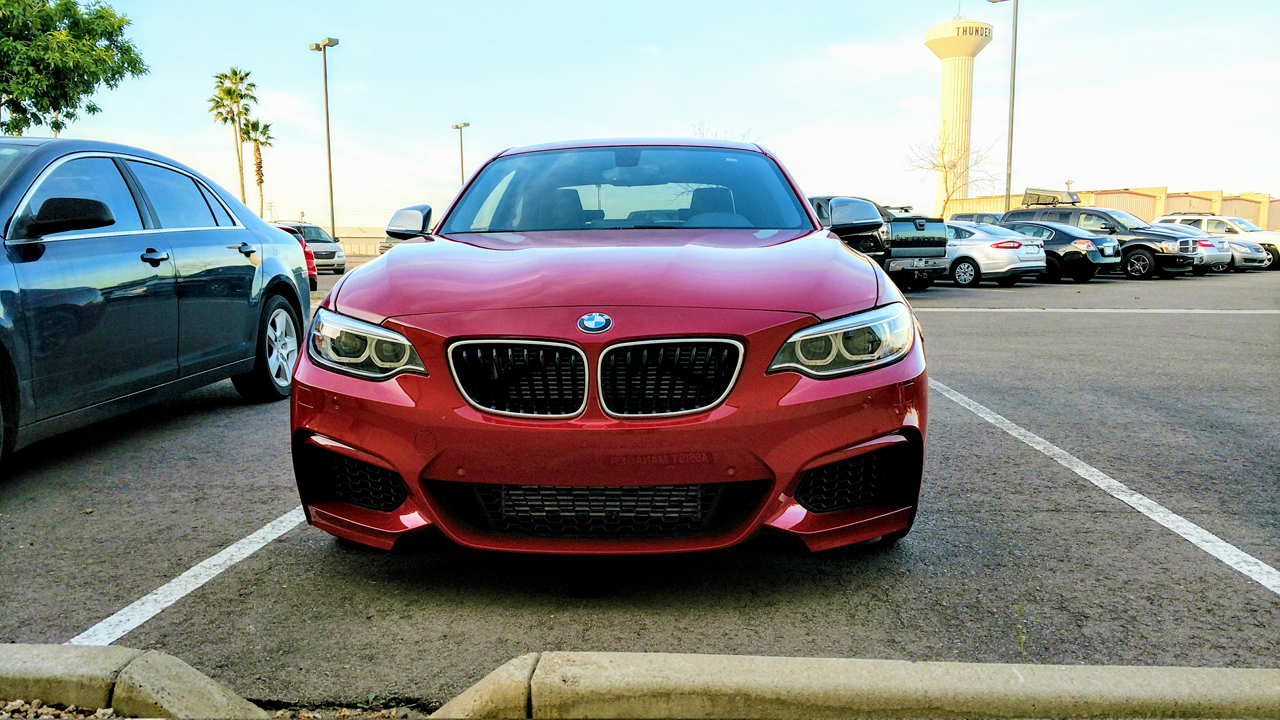 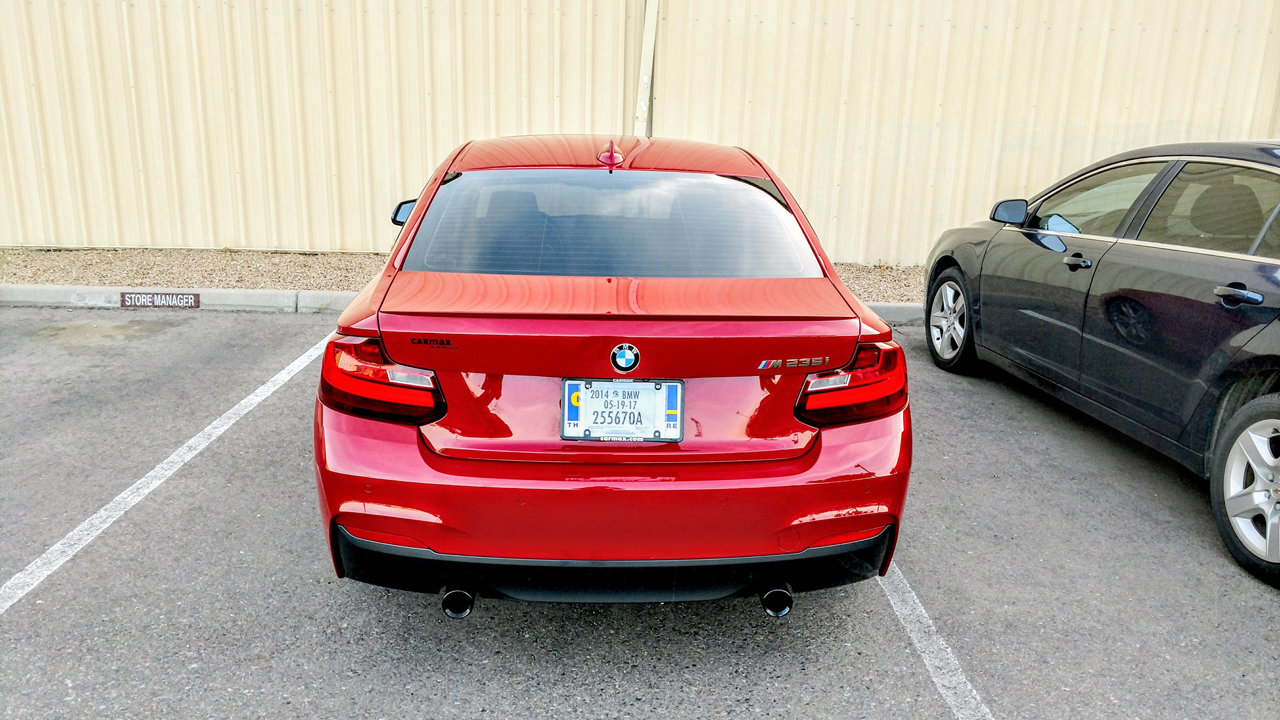 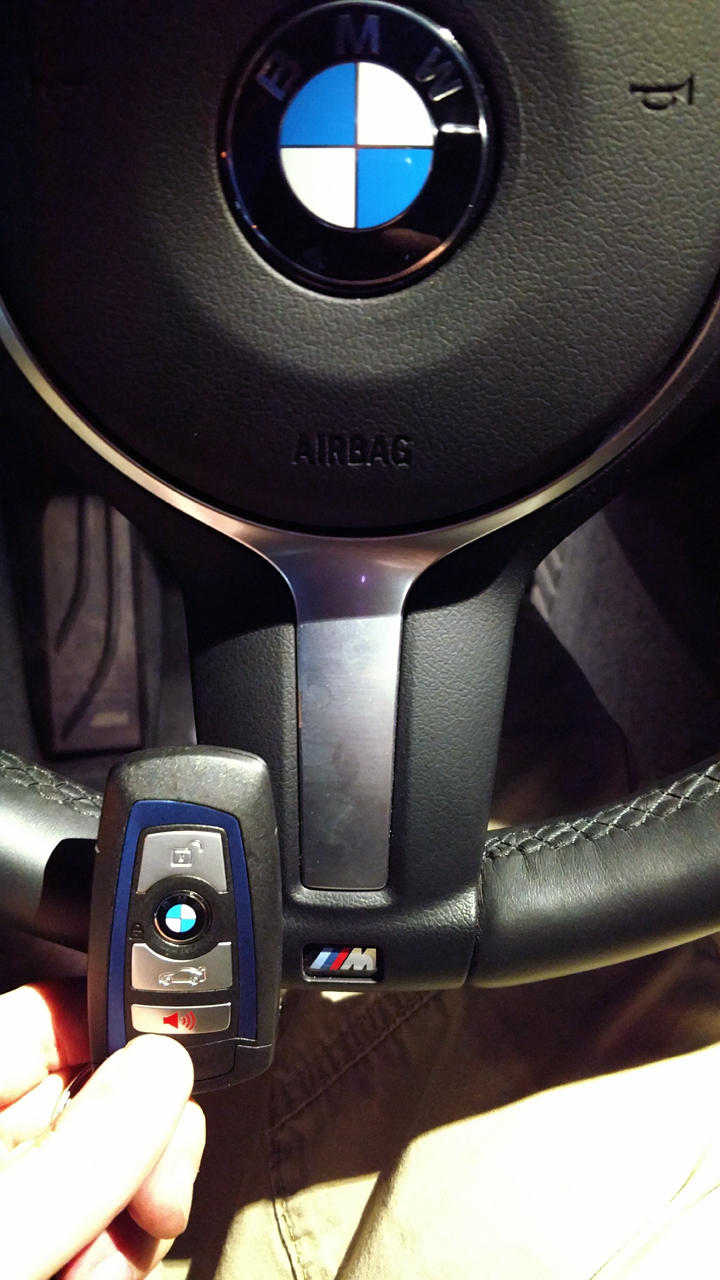 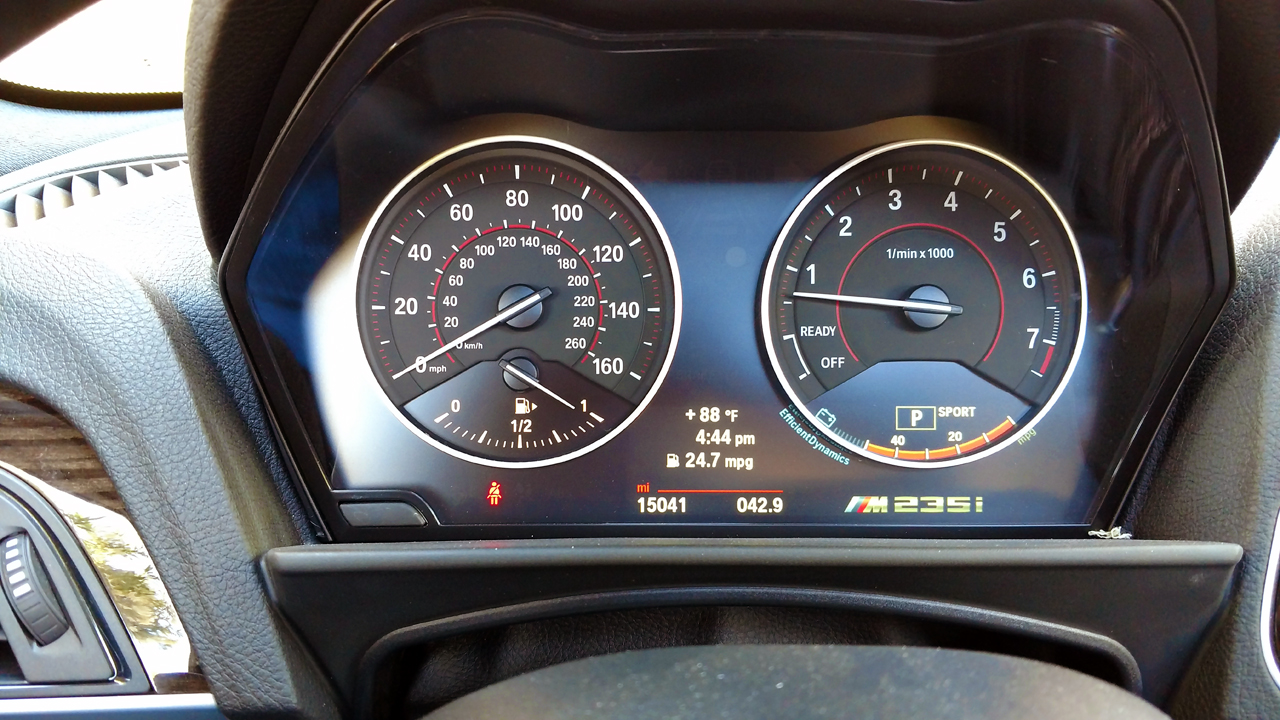 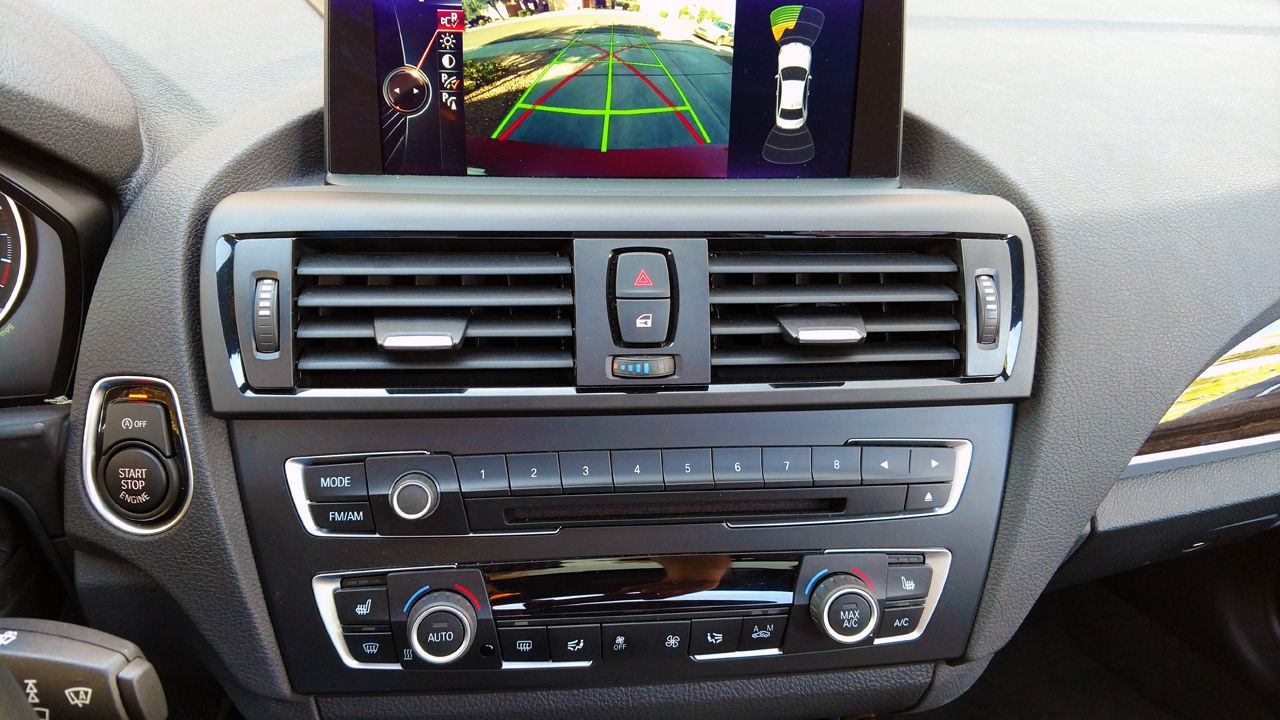 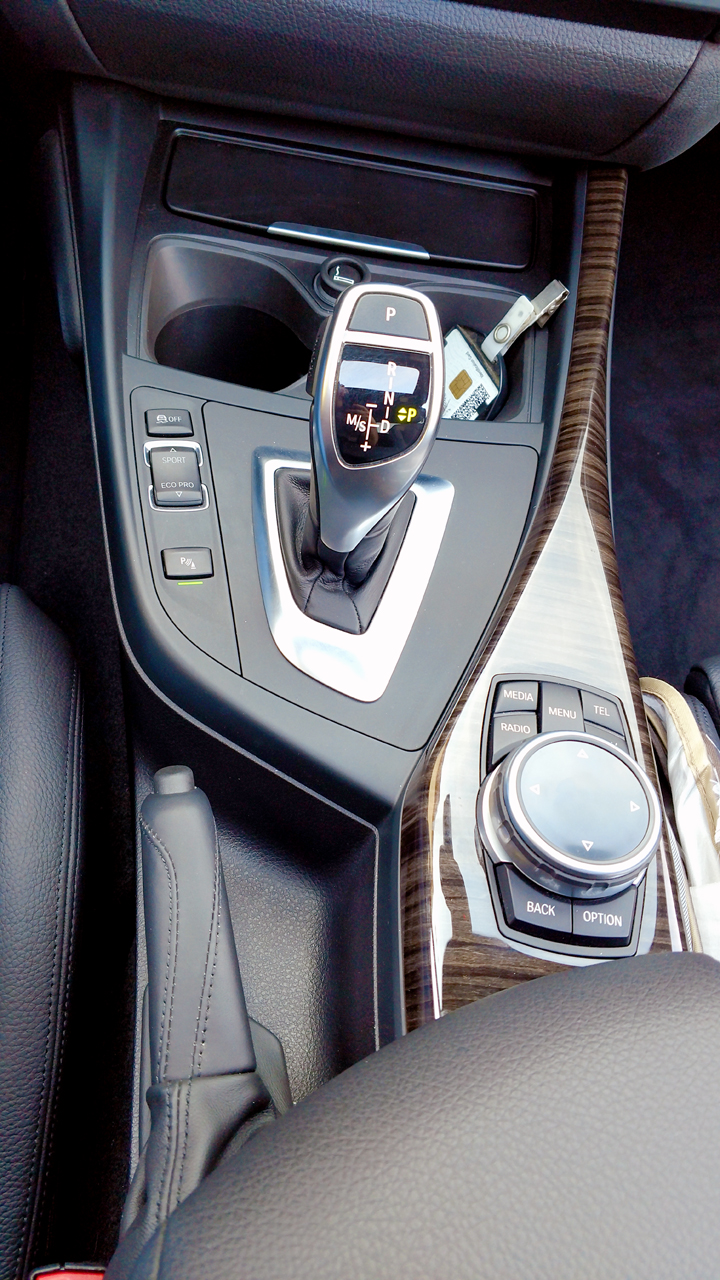 As you can see I went with God's transmission, the ZF 8 speed auto. I was quite impressed with this transmission, and after 13 straight years of driving nothing but manuals, I was ready for something a little different. With how quick this trans shifts it's almost hard to believe its not a dual clutch. Plus it gets the DSG farts, even tho its not a dsg. And it makes me giggle. 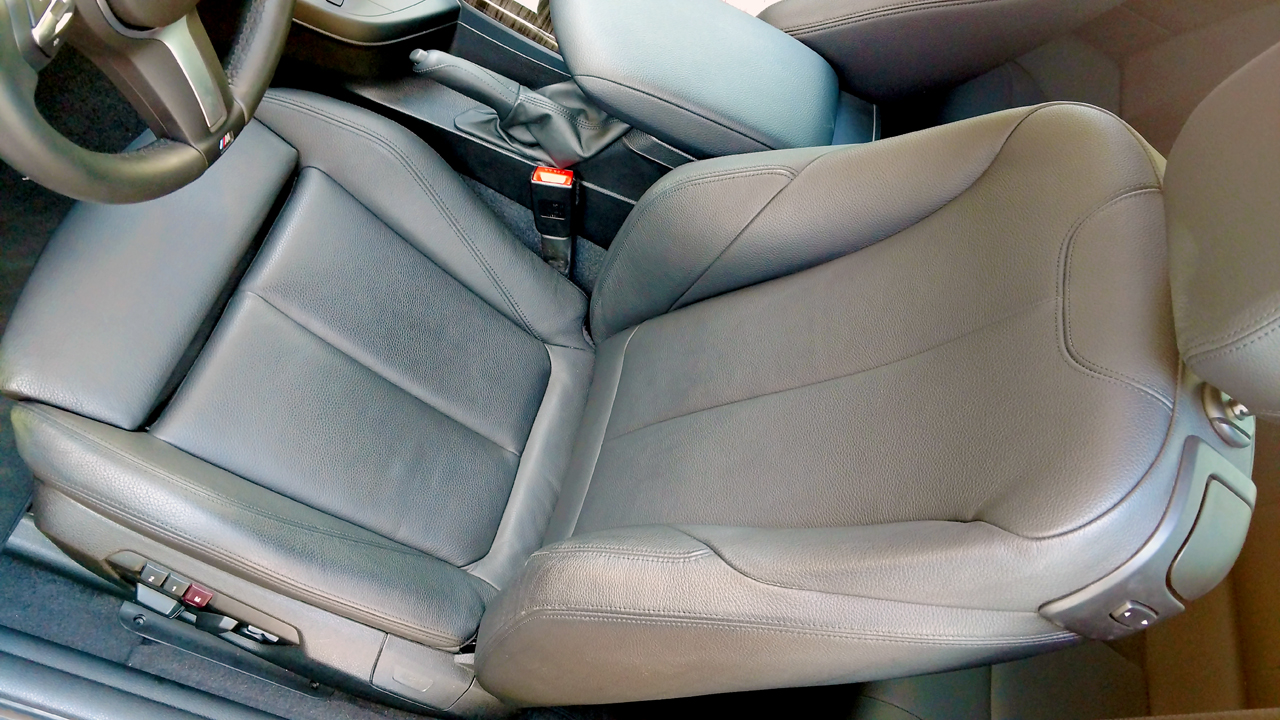 I'll try and get some more pics this weekend if i get ambitious enough to give this car a decent detail. It definitely needs it after sitting on that carmax lot for god knows how long. Theres a lotta hard water spots on the roof/trunk/hood i need to deal with. Otherwise its actually in pretty damn good shape. Couple scratches here and there, but again, it is a 2014 so i expect a few of those. At 15k miles this thing wasnt driven much more than I drove my ST

It was optioned out fairly nice. I had to educate myself on BMW packages, but it does have the premium package, tech package, and driver assist package. I thought it might have had the cold weather package, but i think I just have heated seats. Cuz theres no button on the steering column for the heated steering wheel, and Im not sure if i have the headlight washers. The plates are there, but I think they're there on all the cars whether you have the system or not. Sadly I dont have the harmon kardon sound system, and this standard 6 speaker system just does not compare to the 10 speaker system that was in the ST. I'm also unsure whether I have the optional locking LSD, or the regular open diff. Only way to tell that would be to jack the rear up and try and turn the wheels and see what happens. Or I could just take the car out and try and drift it

Overall the way this car was optioned out it was easily a $50k+ car brand new. I did not pay anything anywhere near that

That was actually one of the complaints people had about this car when it came out. BMW hid a lotta things that probably should have been standard on this car behind their option packages. I would NOT reccomend anyone buy one of these cars brand new, but in the used market, if you can find the right one, I feel like these are quickly becoming the bargain of the century for the amount of car you can get for the money. So far I love everything this car does, and theres so much god damn tech in this car its gonna take me a month to figure out everything this car can do. This morning before I went to work I programmed one radio station in, and paired the bluetooth on my phone, and that was it

I still have the GTO at the moment. My ultimate plan was to find a car that could replace both of my cars because I've been growing tired of the 2 car thing. This car is definitely a competent replacement. In acquiring this car, I didn't have to make as much of a down payment as I thought I would to hit my target payment, so it's not AS crucial for me to sell the GTO, but I don't know. It's something im struggling with right now

But I will say anything is for sale for the right price. This may come a bit out of left field for a select few who thought I may have been headed in a drastically different direction, but I feel like I've made the right choice, as I usually see at least 11 of the OTHER car on every corner on my short 10 minute commute to work every day, and these are definitely not on every corner. Plus as it turns out insurance was way cheaper on this car than it would have been on the OTHER car.

I'm not reading a single word. But congrats man. You're gonna love it.

I read all of it, and congrats! I think you should keep one of your cars and think about a couple track days. You can't appreciate either of those cars without some track time. BMW as a daily, and keep around a weekend track car for funzies. Having one car will bore you to death.

They're such good cars.

Hell yeah man. Love these things in RWD. I know we talked about it but I think they're great, under-appreciated cars.
OP

10sec said:
Keeping in mind the BMW is probably faster than both around a track

No doubt the bmw would be much faster around a track. Even in a straight line this car is deceptively fast. When you put your foot down, it doesnt feel like its doing what its doing.....if that makes sense.

Its got more torque down low than my ST did, and that 8 speed auto just keeps the power right where it needs to be all the time. Once you actually look down at the speedo, its way higher than you think it should be. haha

congrats dude, welcome to the family! BMW>* for an all around car

I miss my old 135i 6mt msport car. The funniest bimmer I've had

Well this is better than what was gonna happen
OP

EmersonHart13 said:
Well this is better than what was gonna happen
Click to expand...

I think so as well.

IDAFC21 said:
No doubt the bmw would be much faster around a track. Even in a straight line this car is deceptively fast. When you put your foot down, it doesnt feel like its doing what its doing.....if that makes sense.

Its got more torque down low than my ST did, and that 8 speed auto just keeps the power right where it needs to be all the time. Once you actually look down at the speedo, its way higher than you think it should be. haha
Click to expand...

I rode in a 10second Grand National about 10yrs ago, and it felt like it was fast, but it didn't feel like the hype. He got on it, and I was like "meh". But we were going like 130mph in that short pull. So I know the feeling, it's so linear it doesn't feel like it's as fast as it is. I can imagine a car as refined as a newer BM is even smoother. That sneaky speedo.
OP

Im loving the different driving modes this car has too. I still havent ventured into Sport+ territory yet, but the difference from comfort to sport is quite noticeable. The steering gets tighter, suspension gets stiffer (but not teeth rattling stiff), the trans revs higher and shifts harder, the exhaust valve opens up and you get a bit more growl and burbles out of the tailpipes. It really turns it into a different car. And when you put the trans into manual mode the paddle shifters are actually quite responsive. It really turns into a more eager car. It also has an Eco mode.....which i havent used yet. Because....why.

Seems more suited to long highway cruises, which I rarely do.

What is the OTHER car? also your parked in only one spot in that pic.

crooks said:
What is the OTHER car? also your parked in only one spot in that pic.
Click to expand...

I know he has a GTO and had the ST. Was there another car he was going to get besides the BMW?
OP

crooks said:
What is the OTHER car? also your parked in only one spot in that pic.
Click to expand...

I'll give you a hint. It rhymes with smodge scrallenger.

And i apologize for the parking job. Im still learning how to be a true knob. I'll get there. The rear view camera with the parking sensors on all 4 corners of the car should allow me to achieve that just perfect angle to screw everyone around me out of a perfectly good parking spot.

I like the bmw better. It just looks small.
Become a snob or grow a mullet and drive a dodge. You made the right choice.
OP

I agree. And it is small. But its a good small. I need to try and get some pics of this next to my gto this weekend. I think itll be hilarious. 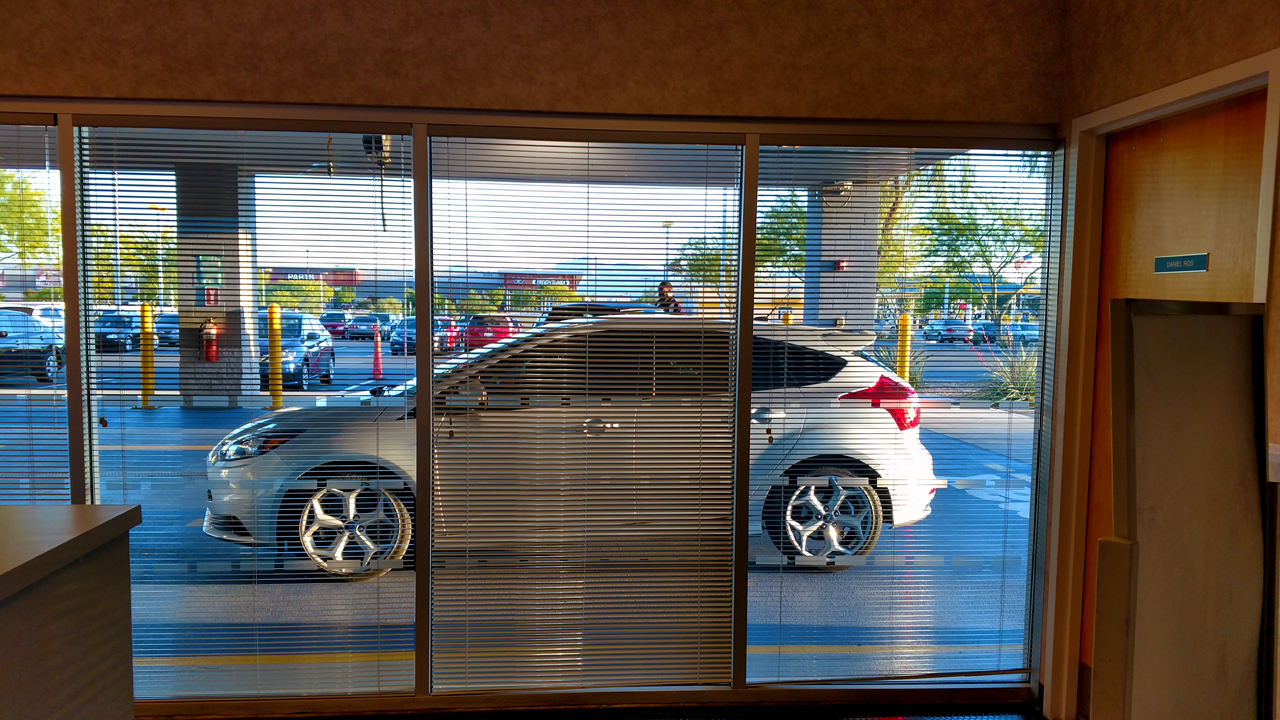 Congrats on the new ride. Looks good in red.
solid or metallic ?
OP

Thanks! The official color is "Melbourne Red", its metallic. I'm usually not really a fan of red cars, but I didn't mind it on this car. It's hard to come across in pics, but its not really a BRIGHT red like most cars, and it kind of changes too depending on what kind of light its in.

The more I see the pics, the more I like the red.

Also, sell the gto while you can still get worthwhile money for it.