Nobody tell Tyrese, but Dwayne Johnson and Jason Statham’s*Fast And Furious spin-off*has secured a release date and has possibly lined up the perfect director. The release date is July 26th, 2019, which puts it before the recently-delayed Fast And Furious 9 (officially titled*Faith of the Furious). We should point out we mean the spin-off comes after Furious 9*in our time, not necessarily in the film’s timeline*which has its own reality*and you will deal with it.

Faith of the Furious*has been pushed back to 2020, but it’s not all bad news; now*word is going aroundthat they may be able to bring back*Fast And Furious 6*director Justin Lin to direct*Faith of the Furious. Now how about that aforementioned “perfect director” for the spin-off?*Shane Black.
Click to expand...

I claim to half calling this 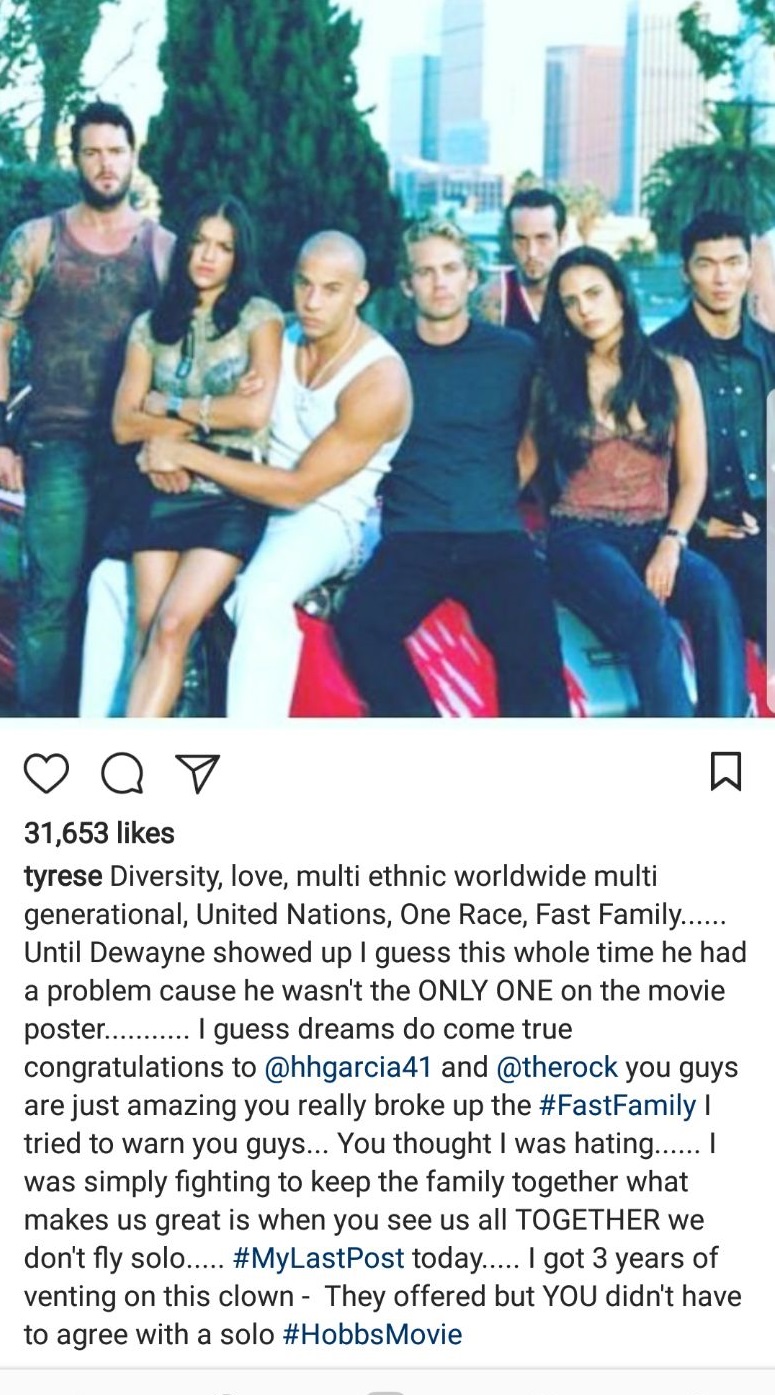 Yep. I saw it on my feed. Everyone in the comments was telling him to STFU because the rock has an actual career instead of just making F&F movies.

I do like how he posted a pic of the first movie cast (him not being in it).
E

VenomInside said:
I do like how he posted a pic of the first movie cast (him not being in it).
Click to expand...

I'd rather watch a rock spinoff than a roman pierce spinoff

Cannot stand tyrese and his character, probably the worst one by far.

from what i read, Vin Diesel is producing the rock's spin-off. So if he's on board then tyrese should really shut up.

ilikemtb999 said:
Cannot stand tyrese and his character, probably the worst one by far.
Click to expand...

My phone did a autocorrect from Letty to lettuce. Lmao

My phone did a autocorrect from Letty to lettuce. Lmao

She’s a very close second for me

ilikemtb999 said:
Cannot stand tyrese and his character, probably the worst one by far.
Click to expand...

that's what i've always thought, wasn't even aware of all this whining drama.
OP

Trailer to debut during Superbowl.
E

I made small tweaks over the weekend.
E

I Shaw wouldn't get my Hobbs up for this movie being any good.
E

Tran would have been a good return story. I would visualize that a past rival to Tran and Dom's former joint business venture comes back and threatens to take down Tran and Dom. That would force Tran to come to Dom and ask him for help bringing them back together and growing the family because Tran would see himself fitting in with the "Family"

But of course, that won't happen...

I got one too!

Wait, Tran died in the first one? I honestly cannot remember since it's been sooooo long since i've seen the first.