Here are the Most and Least stolen cars in America

The list is put together by the Highway Loss Data Institute, an arm of the Insurance Institute for Highway Safety. The HLDI derived its data from the insurance claims people filed for stolen vehicles.
Click to expand...

By looking at claims per insured vehicle year, HLDI’s theft reports allow people to compare the relative risk of each vehicle. In contrast, other most-stolen-vehicle lists report raw numbers of thefts and are therefore dominated by the most common vehicles on the road.

HLDI’s whole-vehicle theft report differs from its standard theft report, which looks at all theft claims, including those for stolen vehicle parts or for items taken from a vehicle.

To isolate whole-vehicle claims, HLDI looked at the amounts paid for total losses under collision coverage, which is generally the residual value of the vehicle. If the payment associated with a theft claim is around the same as would be expected for a total loss under collision coverage for the same vehicle of the same age, it is considered to be a whole-vehicle theft claim.
Click to expand... 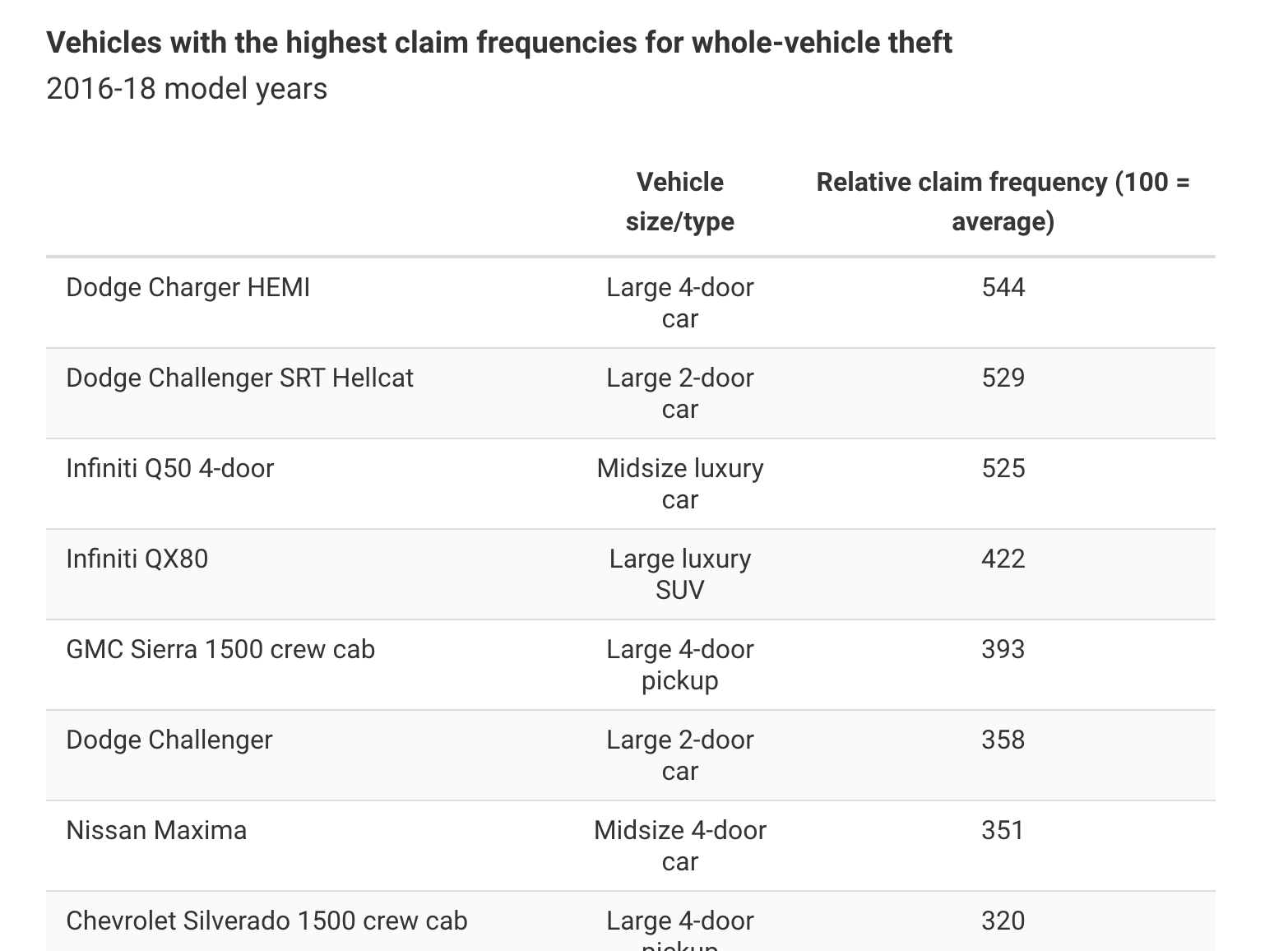 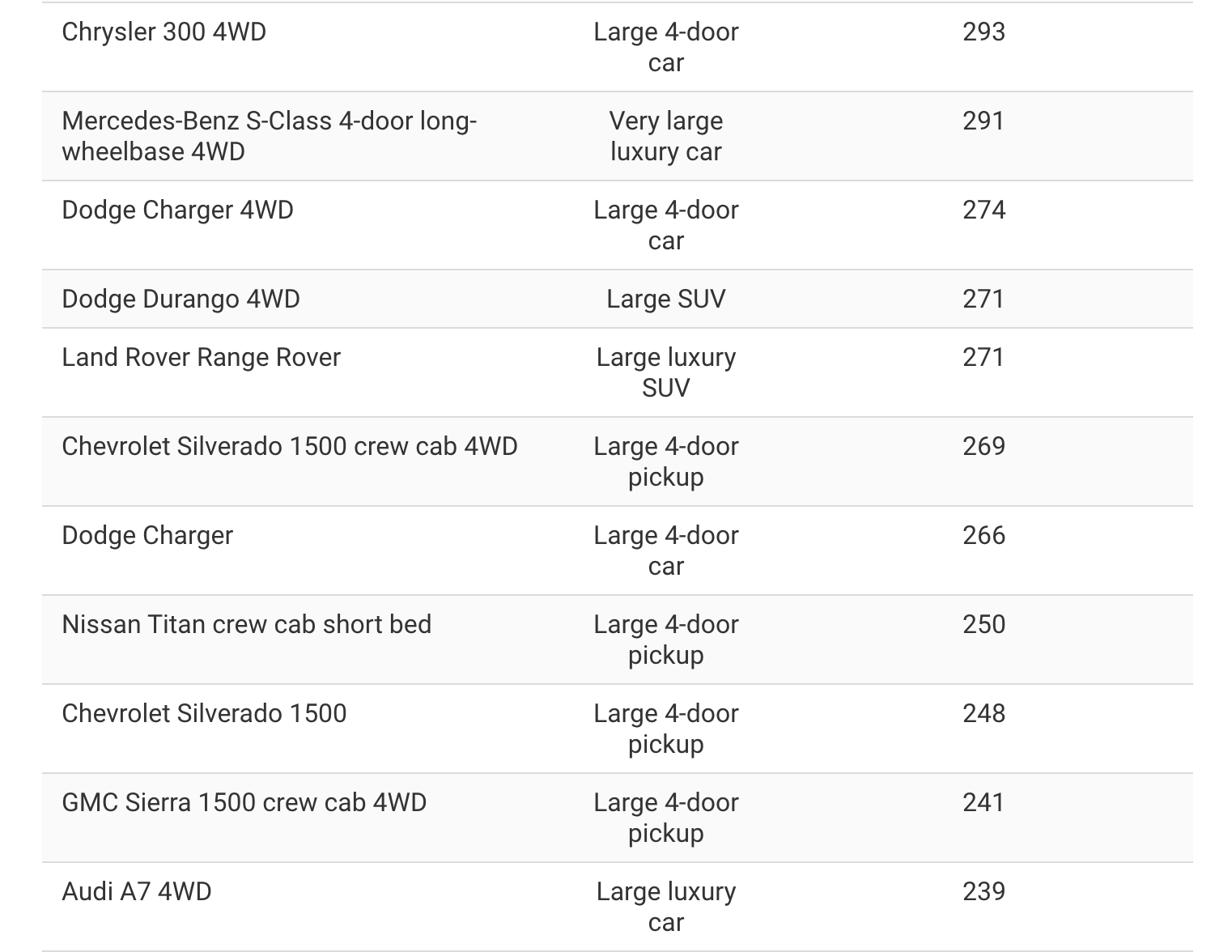 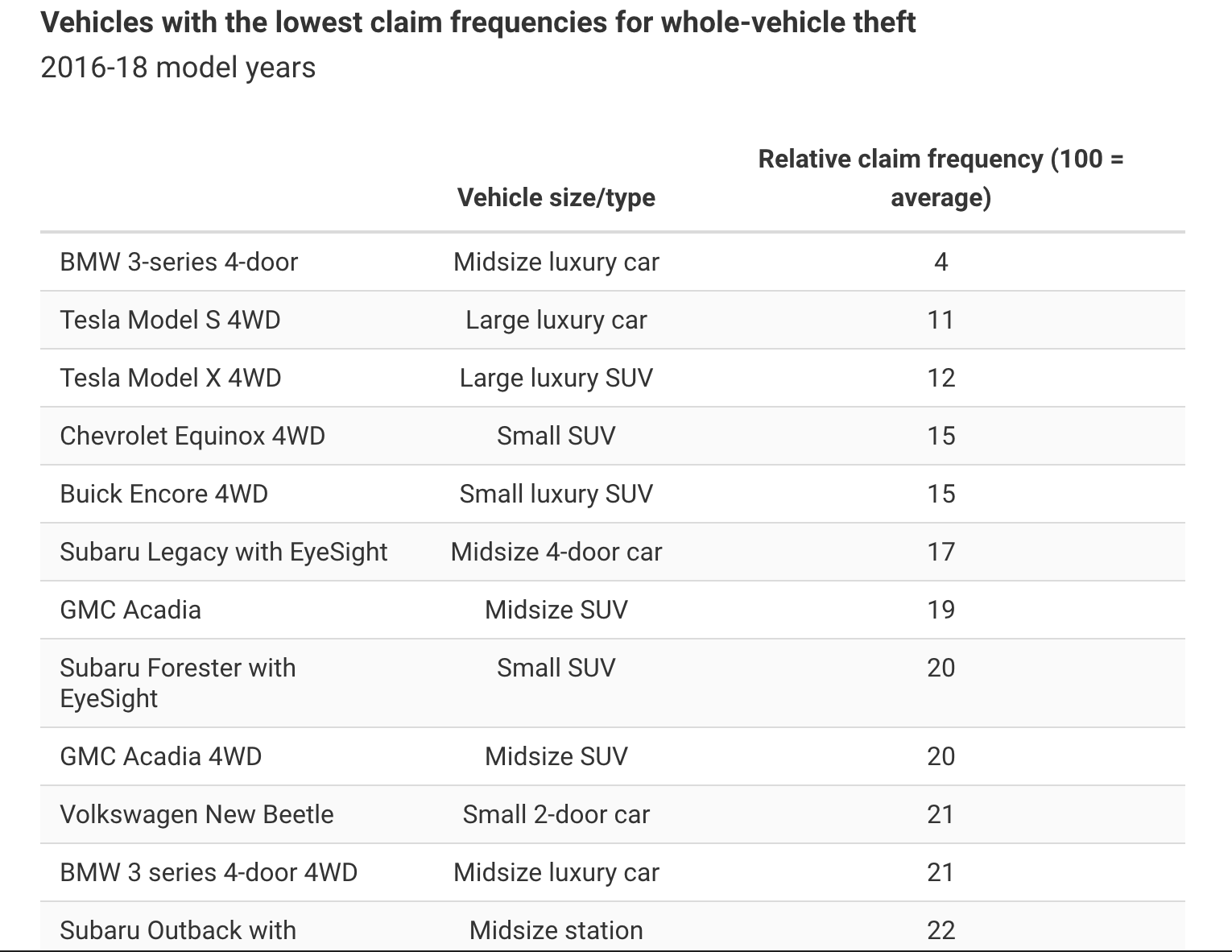 Damn tons of Dodges in the most stolen list. Due to ease or relative value?

Sprayin said:
Damn tons of Dodges in the most stolen list. Due to ease or relative value?
Click to expand...

Due to parts / repairs as shits always breaking

Sprayin said:
Damn tons of Dodges in the most stolen list. Due to ease or relative value?
Click to expand...

Oh, I have one of the top 3 stolen cars. Odd, never figured it'd be on anyone's 'top' list. I wonder if it's from idiots leaving the keys in the car. I thought most modern cars were very difficult to steal without the key fob....that is unless it's picked up on a flat bed and then dragged somewhere.

I saw that too and kinda WTF? Who TF steals a car like that, and why?

Insurance jobs, guaranteed
People get in over their heads with car payments. Pay someone to make it disappear

For sure, chargers and used to be the Chrysler 300. Also probably the most repossessed car

ilikemtb999 said:
For sure, chargers and used to be the Chrysler 300. Also probably the most repossessed car

I have been on Modern Mopar Forums regularly since 05. I can probably count on one hand how many people both locally and around the country who have had their shit stolen.

couldn't this list also be lined up with the demographics/locations of people owning/buying these cars?


plenty of 3 hunnas and chargas in the hood.

Or because they are literally GPS tracked 24/7 with an active data connection.

It isn't worth the work to steal them professionally.

Shawn1112 said:
Insurance jobs, guaranteed
People get in over their heads with car payments. Pay someone to make it disappear
Click to expand...

The top stolen models you see around the hood all the time....

Lol chargers and 300s literally every car you see on over sized rims bumping in the hood.

WTF? oh shit, for some reason I thought Jeep Wrangler was going to be in the list due to the super easy access to get in and open the hood.

So Criminals don't like Fords? is it because they know they are going to break-down down the road?

I remember when the Mercury Marauder was on top list.

This is a very interesting list to say the least.

Didn't think the Dodge's would be stolen because of parts needed because they break down all the time.

Over 3 years running strong on my Durango. Only has a software issue on the trans, but, I still drive it 7 days a week.

I do see a ton of Charger's as they are very popular cars on the road, so, I can only agree that would be one of the top stolen cars for sure, haha.

Tesla makes sense because of the live track, but, then again, they are overpriced and not worth the effort to steal. Plus, they most likely don't appeal to thieves as easily as the other cars on the list .

I see a bunch of Chrysler products on Facebook marketplace getting parted (I’m IN Chicago) it screams stolen to me.. I’m talking like 2016 grand Cherokee srt’s and the 392 chargers and such. Engine/trans for sale, random interior parts for sale, you can see there is some body damage half the time and it’s in some bumfuck looking backyard.