What's up fools! As many of you know, I've been riding track days on my 2015 BMW S1000rr since I bought it (rode a gsxr 1000 before that). I've been riding in advanced the last ~3 years and had really gotten to the point that at most events, I was running faster than ~90% of the advanced group, so I decided it was time to be humbled and do my first race.

8/18 - loaded up the trailer and headed to a track day (not the race) at Road America.

8/19 - Ride RA, went 2:33.7 with a top speed of 172. I rode 7 full sessions to make sure I was as comfortable as I could be. Swapped the rear tire to a new Michelin slick before my last session (more on this later)

8/22 - Race Practice Day at Autobahn in Joliet (North Course). The whole registration & tech processes were a cluster fuck (partly my own doing because it was my first tech for a race) and they gave me a bad transponder, but that's OK. Still got on the track for a good 4 sessions, then skipped the last one because I got in to "tire conservation mode" after seeing how much of my new rear I was using. It wore perfectly, but it was hot, and rubber disappears fast in the heat. In hindsight, I absolutely should have went balls out in the last practice then bought a brand new rear tire on race day. The other problem I realized later is that I did not get anywhere near enough practice, before this weekend I hadn't been to ACC in years. I got way more comfortable with this course throughout the races, which isn't how it's supposed to be.

- 8:45a: Go out for morning practice and go 1:10 taking it easy. Then I took my new front tire I've been sitting on for 2 months and had it swapped by the michelin guy. He said my rear had enough life left for 3 races, but that it'd be tight.

- 10 to 11: Relax and watch and let my nerves build up while my tire is being swapped out. Lol. The morning races are 25 minute endurance races, which I did not sign up for. I'm signed up for races 5 (unlimited Supersport), 7 (Rookies Cup GTO), and 11 (Unlimited Superbike). These races are all after lunch.

- 11a, bike is on the warmers (takes an hour to fully warm a cold tire) and I am NERVOUS as fuck knowing I'll be on the track in an hour

- 12p, Race 5 (my first one). The way it works is that there are normally 2 classes on the course at once, separated in to their own groups. I'm in the 2nd group, gridded up at position B11. 3, 2, 1...GREEN FLAG...and I botch the launch then hit neutral instead of 2nd (this will become a common theme) and everyone flies by me within the first 100 feet of the race. Luckily the rest of the race was pretty spaced out, which was good for my first time. I went 1:07something, passed one guy in my class and finished 6 of 7. I could not catch back up to the guys that got me on the launch. You find that if you give up 2-4 seconds at the start, most of these guys are fast enough that you're just not gonna get that back. We were all running lap times around 1:05.5 - 1:08. Get back to the pits and I was EXHAUSTED but felt great, major adrenaline rush. I was soaked in sweat. They're 8 lap races BTW.

- 12:30, Race 7 (my second). This is the rookies cup race where there are 3 classes, separated by bike size. I'm in grid position A1 (faster bikes to the front). Launch vid from this one will be in the 2nd post. One dude absolutely killed the launch, the other guy got me by a little bit. These 2 other guys in my class were fucking fast, both going 1:05's while I was still in the 1:07's. A guy on a 600 actually passed me in a turn that I botched then I had fun going back and forth with him for a couple laps. I'd out muscle him in every straight, and would brake later and carry more speed through turns 4-9, but for a while he was getting me in turns 1-3. I used this to learn a little more about turns 1-3 which was useful, I ended up finishing ~50' ahead of him. Finished 3 of 3 in my class but had fun with the kawi 600 and I learned a lot. The problem that I encountered in this race...in the last 3 laps my rear started sliding BAD in right hand turns. I had begun to lose the ability to carry the speed I wanted in turns 8-9 (see below) which you need to do to set yourself up to pass in the straight. Those are sweeping turns and you're still leaned over pretty good well in to the straight, so not being able to use much throttle without sliding is a problem. I turned traction control all the way up to 7 on the fly after I felt my rear kick out several inches while leaned in t9.

1p - Race 11 (my last for the day). Gridded up in B11 again, basically the same group as race 5. I'm nervous because while I'm more comfortable than ever with the track, I knew my rear was gonna be toast by lap 4. Launch the bike, hit a false neutral again. I could not pass in right hand turns or on the straight basically the entire race, I've never felt my rear slide like this before. By not carrying much speed out of 9, passing in the straight is sketchy because there's a lot of bumps in the braking zone for t1, and t2 is sharp AF, so I didn't want to chance it because if you lose any braking time due to hitting a bump, your line through t2 will be total shit and it's easy to go off course. This entire race is a blur but I did eventually do a lot of passing on the back half of the course and have a video of this one that I'll post tonight, since I can't remember much specifically I'll let the vid do the talking. I finished 5 of 7 and went 1:06.7. Really feel I could have gotten a podium here and gone 1:05 on a fresh rear, but chalk it up to a lesson learned.

TLDR:
Only race on new tires
I need to practice launching and might need to switch to GP shift (even though I've been riding conventional since forever and never had an issue)
Make sure to be super familiar with the course you're racing on

Most importantly: Racing a motorcycle is Fun AF, this was the most adrenaline I've ever felt in my life. Competing with bikes that are inches from you is just an unreal feeling. It's 100% muscle memory, the bike is just an extension of your body and you're not consciously really doing anything with it, so fucking cool.

Pics and vid to come in post 2. Track map below for turn references. 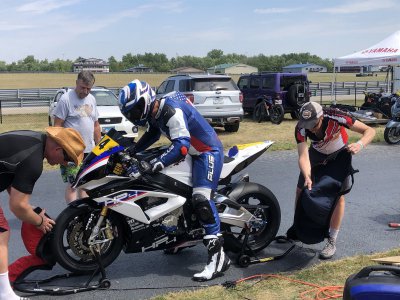 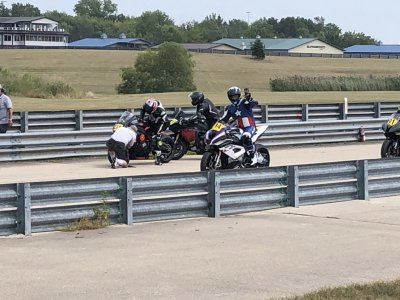 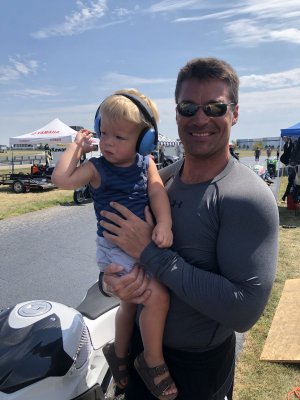 Back in the pits after race 2, pure exhaustion 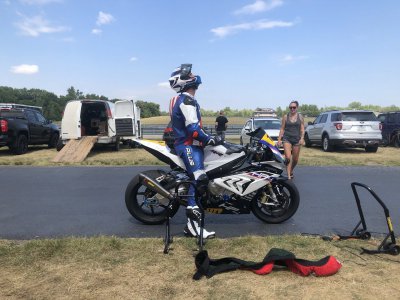 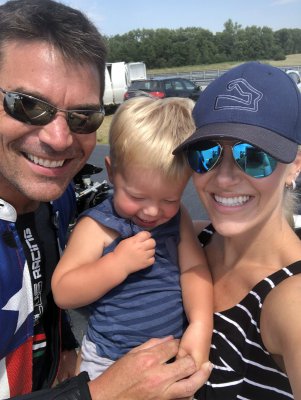 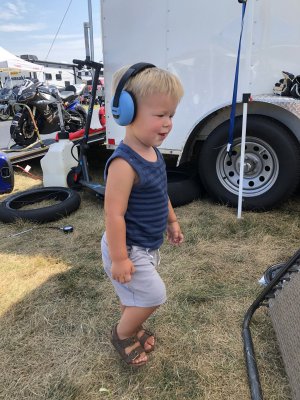 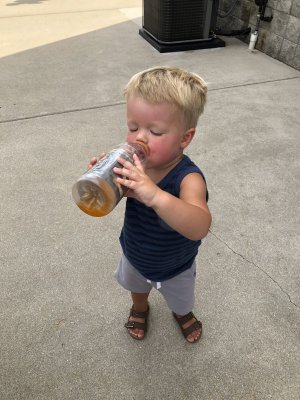 Mook how do I post a vid from my iPhone. I only know how to do pics

"and the world is full of dreamers"

That is absolutely awesome.

Very nice. looks like a blast and I bet the little one loved it!

So did you get any Captain America! shout outs?

Mook how do I post a vid from my iPhone. I only know how to do pics
Click to expand...

That. Site supports video but it would eat up storage super fast.
OP

Got it. It's an underwhelming launch vid from my wife's phone, i'll just post the onboard vid of race 3 tonight. No telemetry data because I did not want my lap timer distracting me lol

Or maybe I can add a speed display using the gopro gps data (just won't have track location or lap time)...I'll give that a shot in racerender. I wouldn't mind seeing the speeds I hit, won't be anything crazy since it's such a small track and my tire was dead.

tinfoilhat said:
So did you get any Captain America! shout outs?

Yeah a couple, lol. I love that suit
OP

That vid is in the RA thread, see below. Ignore the bug

Is that Brian Wink in the cowboy hat messing with your front tire?

The whole time I was there, I was wondering how I was getting beat so bad. I looked at last year's results a month or so ago and thought I had a podium in the bag. Soooo for the hell of it I did a year over year comparison. Look at the difference from 2019 to 2020. The amateur and rookie classes got FAST, nobody there could believe there were people going 1:05's as an amateur. In 2019 my 1:06 would have been 2 seconds faster than the fastest guy there, lol. Last year there were only two people in unlimited superbike amateur

I need to get faster! 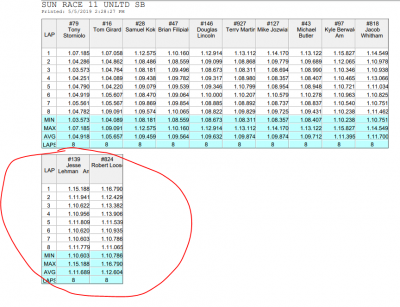 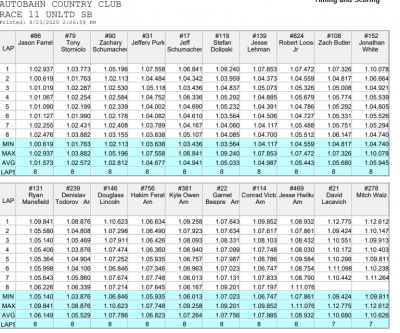 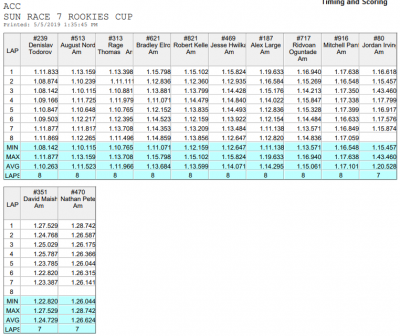 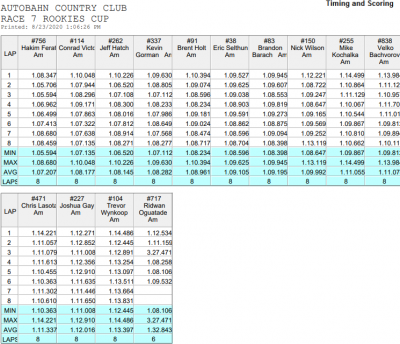 BS ISF said:
Is that Brian Wink in the cowboy hat messing with your front tire?

Great write up and congrats on your first race weekend. Awesome stuff man!!
Click to expand...

i thought it was Sean “Farmtruck” Whitley

I remember my first race day and the nerves. good stuff, miss that.

a quick tip, if you go gp shifting, dont ever go back and dont ride anyones bike that isnt gp shifted. I learned that the hard way going into turn 2 at BHF
OP

Here's the vid of the 3rd race. Man, counting up my mistakes I'm actually surprised I got 5 of 7. Shit launch, kicked in to neutral in t2 lap 1, totally botched t2 in the second lap

You can't normally tell if a bike is spinning the rear from a front mounted camera, but watch at 4:16. That was only the 4th lap...that's what I was fighting with the whole race.

Damn man. That looks like a good time, very nice

Maaaaaybe should have replaced your tire. Cheap
OP

dun4791 said:
Maaaaaybe should have replaced your tire. Cheap
Click to expand...

Most definitely should have replaced the rear. I didn't think i'd tear it up so fast

Lesson learned. Next time I'm going out on fresh rubber and passing everyone in the turns