I havent given it a second thought....very strong chance I'm skipping this.
•••

I'm still on board for getting it. It was part of my gaming life.... I just have to. I did enjoy the demo and it made it fun to play again.
•••

I've probably sunk 400 hours into FF7....but playing the demo didnt bring back the urge to go through it all again.
•••

I wasn't expecting to like the demo as much as I did. If I wasn't already going to buy it, I'm absolutely buying it now.
Reactions: FESTER665
•••

Played the demo last night, will definitely be buying it.
••• 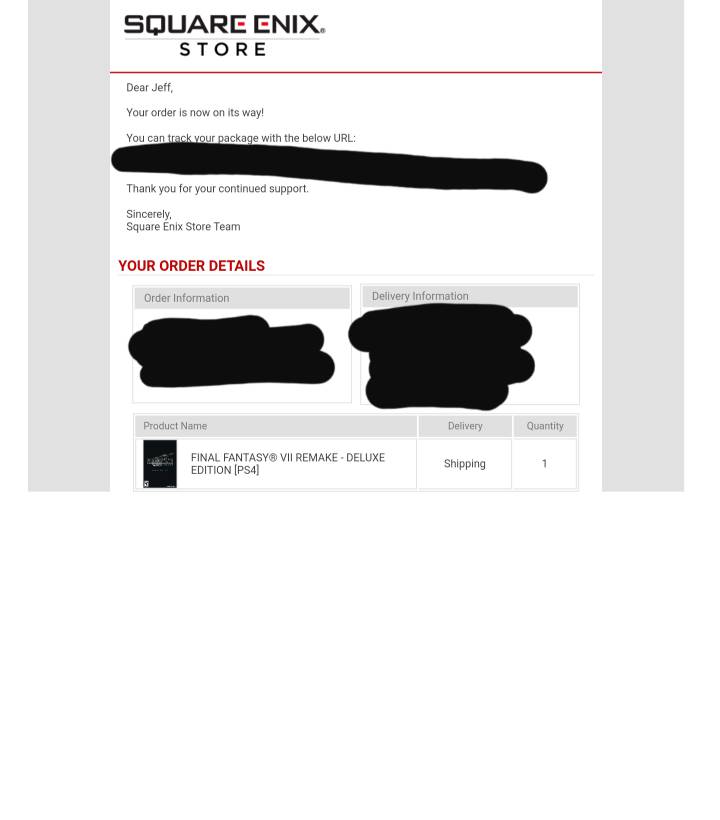 Looks like its going to show up on Saturday unfortunately.
•••

Mook said:
IGN says 30-40 to beat. How the hell did they stretch midgar out that much??
Click to expand...

Been trying to avoid spoilers, so I'm not 100%. If I had to guess, they added all of the story elements that get hashed out in Kalm after you leave Midgar, into the story in Midgar. I'm sure they had to add a LOT of Sephiroth since he never even really shows up in Midgar in the OG. I'm also willing to bet that they are going to full blown re-tell the story. Add elements from the EU. Add new elements. When this is all said and done, it is likely going to be a completely different game. For better or worse.
•••

I picked up a copy from Walmart yesterday as I needed to get a few things.
•••

I'm having a ton of fun with this game. The nostalgia is there, but they've made it it's own game at the same time.

Some of the fights are annoying. I'm getting more used to battle though.
Reactions: importcrew
•••

Really on the fence with this game.

No golden saucer, no world other than Midgar to explore, etc.

Game looks great but I am thinking there is only so much you can do in Midgar before this gets boring.
•••

Grabber said:
Really on the fence with this game.

No golden saucer, no world other than Midgar to explore, etc.

Game looks great but I am thinking there is only so much you can do in Midgar before this gets boring.
Click to expand...

They've essentially turned Wall Market into this games version of Gold Saucer. Midgar is massive. Its easily 100x bigger than it was in the OG. Each sector is its own city (at the point I'm at, I've only been to the slums, so I'm not sure if it opens up above the plate later in the game.) The scale of Midgar in this game is easily larger than the world in the OG. Easily.
Reactions: Grabber
•••

Sprayin said:
They've essentially turned Wall Market into this games version of Gold Saucer. Midgar is massive. Its easily 100x bigger than it was in the OG. Each sector is its own city (at the point I'm at, I've only been to the slums, so I'm not sure if it opens up above the plate later in the game.) The scale of Midgar in this game is easily larger than the world in the OG. Easily.
Click to expand...

I MAY buy it just because I LOVE FFVII.
Click to expand...

Story is fantastic. The overall plot (so far at least, I just got to Wall Market) is the same, but they've added a lot of detail. A lot of character development for characters that were kind of minor in the original, but absolutely needed more story time. Then there are parts that are completely new. I'm like 16 hours into it and I haven't even gotten inside Don Corneos mansion.

Gameplay is pretty good. I have a few issues with the combat. It can be a bit button mashing at first, but that gets less as the enemies get more difficult and you get more abilities and magic. Then the AI of the off characters is terrible. They stand around and don't do a whole lot most of the time. The game relies on you gaining ATB bars to execute commands (abilities, magic, items). So you need to attack with the physical attack to build it up. But the characters you are not currently controlling don't build ATB bars very quickly, so it makes it difficult to use them. I've gotten more involved in swapping between characters a lot. I'll swap a character, build their ATB, and then use that while I'm building with another character. That seems to work the best.

The game is quite hard at times. The bosses are difficult. Much more so than the original. They require a real degree of strategy outside of mashing physical attack.

If you loved FF7, I'd definitely recommend getting it. Just don't expect it to be a replica of the original.

Also, I can't believe I'm saying this, but they hit a homerun with updating the music so far. The music that was from the original is fantastic. The new music is....just okay.
Reactions: Grabber
•••

Played about an hour or so last night and got to the point where you're heading back to base but haven't quite made it there yet.

Great game. Combat is actually pretty simple once you get the hang of it. Kind of has an A-RPG of a hack and slash kind of.

Music is amazeballs, graphics are great, story so far is awesome.

Really trying to figure out what they intend on doing for the rest of the world from the OG game or if they are making this remake a standalone game and ending the story. They could do chapters with future DLC where you can now explore open world, etc.
•••

I might have to come back a little bit on the scale comment. I'm at the part where it's time to go to Shinra tower and it blatantly says "once you go to the tower you can't come back". And it's just Sector's 5, 6, and 7. So it's not as big as I would have wanted.

As far as end game content, it seems kind of lacking. Unless they have something after Shinra tower? Well comment when I get there.
•••

What chapter are you on?

Hopefully there is DLC or something that comes in the future otherwise people will get bored very quickly.

Despite the length, overall amazing game.
•••

I'm on chapter 14. Did all the side quests and feel like I got everything. Going to head up to Shinra tower next. I'm 27 hours in.
Reactions: Grabber
•••

Looks like you've still got a bit to go then.

I'm a bit disappointed by the materia in this game. Its almost like they looked at the game as a whole (spanning at least 3 games, maybe more, who knows) and spread the materia out like it was a single game. It's just the basic materia, nothing great.
•••

Also a bit disappointed in the weapons. There are like 5 weapons for each character (which isn't all that bad I guess). They seem to put a huge emphasis on magic in this game tho. It's either huge on magic or huge in attack, not much of a balanced approach. And if it's more attack focused, it's lacking in materia slots.
•••
You must log in or register to reply here.
Share:
Facebook Twitter Reddit Share Link
Top Bottom
Forums
TCGgram
TCGbook
Menu