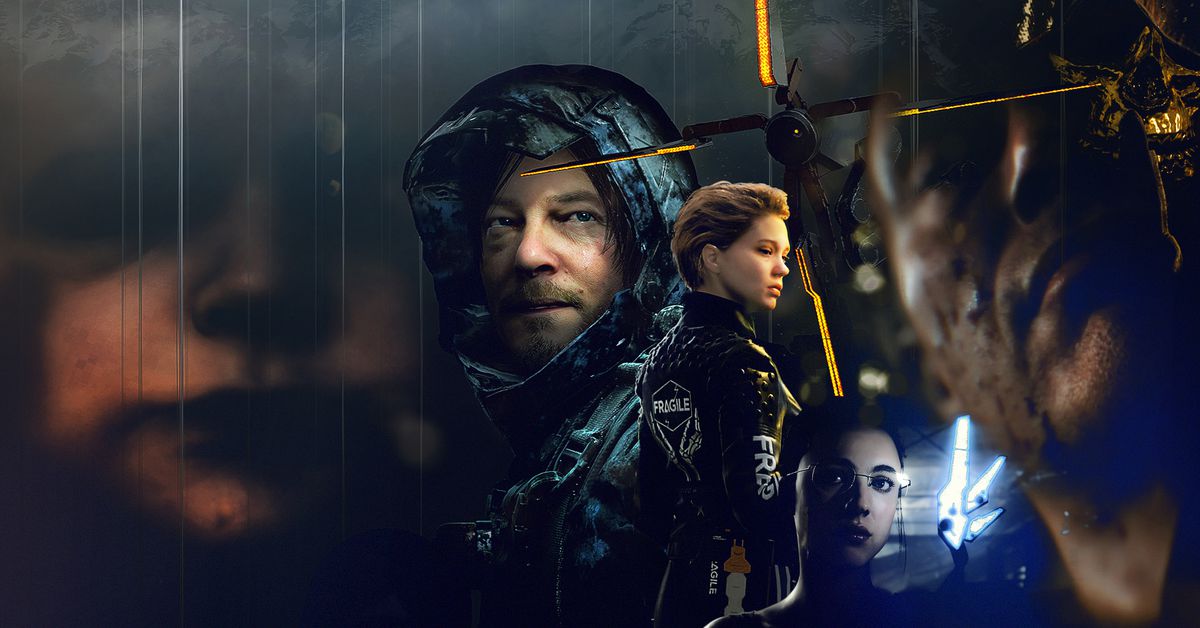 The most advanced walking simulator the world has ever seen

After some thought Ill probably pick it up. I mean I liked a game where I play different characters and all you do is walk around and do QTEs.
OP

Kojima himself even joked (or maybe it wasnt a joke) that people would call this game the ultimate walking simulator. I'll still probably get it.
OP

Anyone pick this game up yet?

I’ll pick this game up once it’s cheaper. Been watching streamers playing it and it’s a game I would enjoy.

IDAFC21 said:
Anyone pick this game up yet?
Click to expand...

I got it Saturday. Didnt play any until last night.

Im 3 hours in. I still barely know WTF is going in this world, just what I am tasked with. I totally forgot about the whole BB (fetus baby thing) so now I have the urge to touch my wifes preggo belly and ask how our BB is.

Visually, this game is stunning. Even on my launch PS4 and peasant 1080P TV this is probably one of the best looking games Ive seen.

Playing as a post apocalyptic Amazon delivery man is kinda fun. I do have a feeling Ill get to pull some more Solid Snake action (already have to sneak around at some points) once I unlock weapons.

So I found a reddit thread, and the main poster basically says the same things Ive said, except I dont mind the early parts of the game. I havent made it to chapter 3 yet, as Im still in 2, but this game is pretty damn fun. I really like being Sam-azon Prime.

I've seen articles popping about chapter 3, but I've been avoiding them. I do wanna get this game, but I've been playing the hell outta The Outer Worlds lately and really wanna get thru that before I start on anything else. Plus Star Wars is out this week also, and if that's good......

I hear that. What I didnt know about the game is as you progress though the story, you unlock the "network" (forget the weird name Kojima gave it) and you can see what others have built. Ive used ladders and ropes left by others, and left a few myself. Its a cool aspect, and I do wonder what it will be like playing this game as time goes on and less people play, or they take that aspect offline.

Also, this commercial played during the rick and morty S4 premier last night

Not gonna lie, this was me. 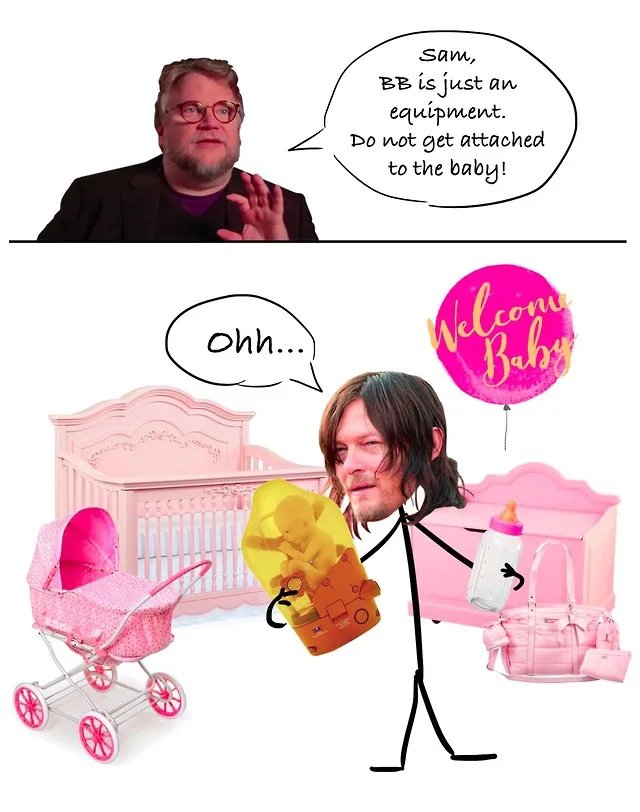 Also, when the baby cries, it comes through the PS controller speaker. It freaked me out the first time, and now I do what I can to make it stop. BTs breathing down on me? NFG. Gotta stop the baby from crying. Carrying the literal world on my shoulders? Im making sure BB is getting soothed. Mook can wait 5 more minutes for his package.

Reading these comments makes me want to get the game now...but I still want to wait. Trying to get my enjoyment out of Cod first. I've played this year's Cod more times and longer than I have the past 4 years combined. 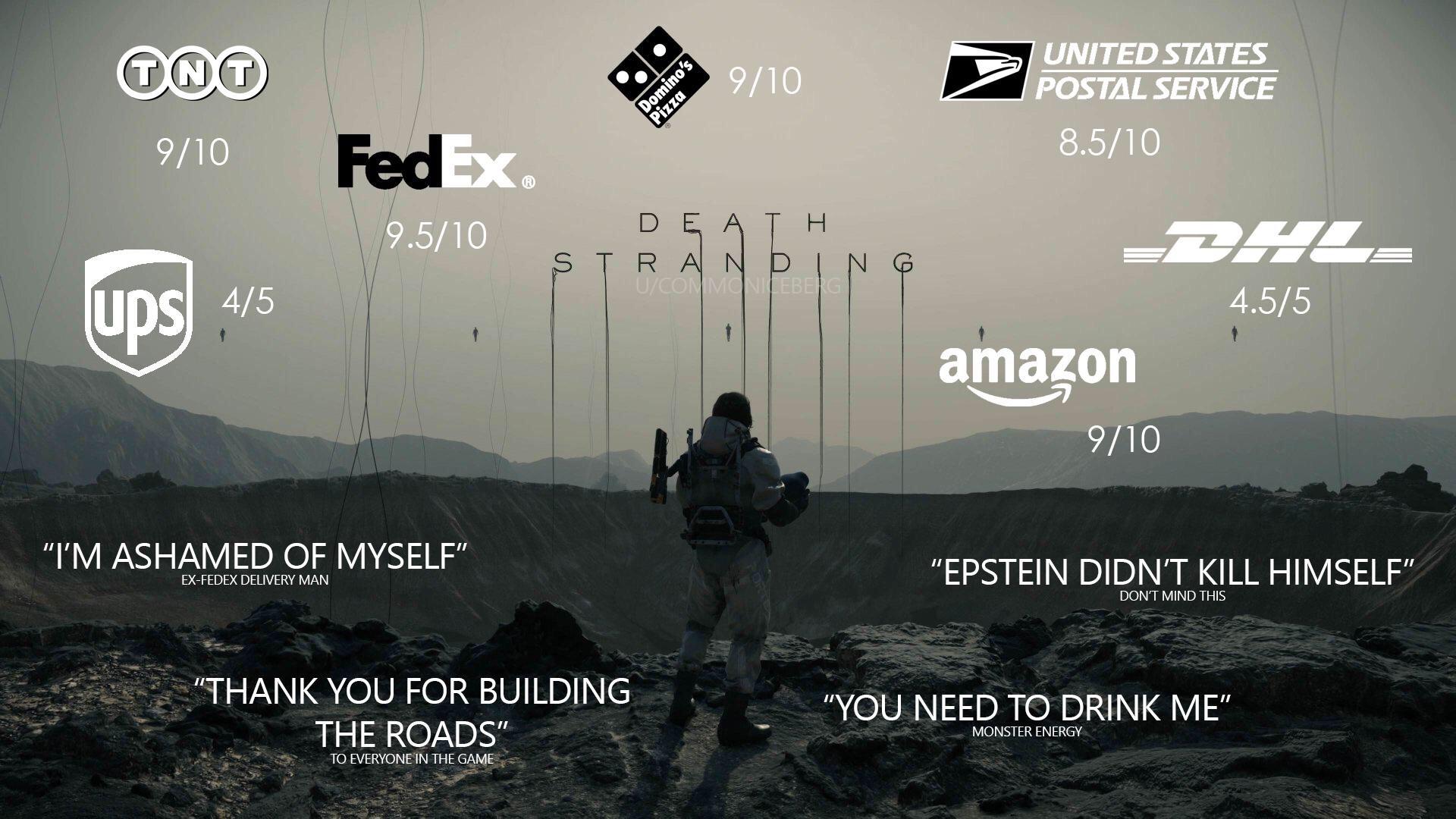 So I am in the middle of chapter 3 now and it is starting to unlock more stuff that makes the game easier. I actually have over 80K likes since I have spent time beating up mules and stealing back stuff they stole only to pave roads.

In my instance we have a road paved from one town to the next. Now Im taking my time and paving roads. Hopefully there are no unions in the UCA.

I don't know if this makes me want to play the game less, or more

I just took another break to stretch and go to the bathroom and noticed the time. Ive been collecting and donating for roads for almost 3 hours.

Going to do a little more story and call it. I added 2 more stretches past south knot city. I want to keep going, but some of the materials are kinda daunting to collect and unless you have a truck, a PITA to transport.

Seriously, this game is scratching an itch I didnt know I had. It has a very MGS5 feeling, but does combat and other things in a totally different way. Along with the WTF is going on story.

Also just checked, Im now past 96K likes. Ive gotten 10K in just the time Ive played due to the roads Ive helped build. Which is funny cause I look at the leaderboard in my instance of the game, and people are ranked higher than me, and might have more likes, but they are NPC likes with very little online people, where just doing roads mine is the opposite.

Well, I was going to bed. Now I have to watch something else. Fuck.

Question: Is this an on-line only game?

No. You can play it totally offline. Online from my experience only lets you see and use what others have built and vice versa. 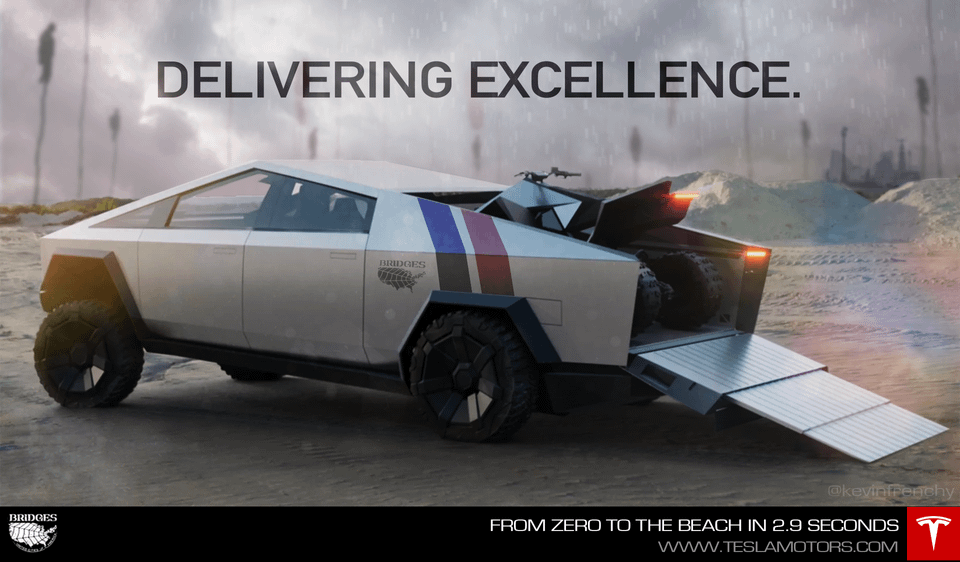 40+ hours later the story is done. Now to just collect all my trophies.

I don’t know if it’s the stage in my life or just things I’ve experienced and going through now, but this game has some gut punch to the feels moments. It’s a Kojima story so it’s out there for sure, but it’s not nearly as convoluted as Metal Gear, which I still like as well. You got your twists and WTF moments and for the story you really have to keep up with the emails and interviews which is a bit of reading. You probably could get away without, but things do make more sense.

I personally love this game. It’s a game with a good story, and while it can be stressful and make me jump out of my seat and scare me enough to keep me from sleeping, I would play it again and actually look forward to finishing up other things while still building for other players that will be starting.

I did die a few times doing boss fights, but it wasn’t overtly hard at all despite me playing on hard (the hardest level) mode.