Absolutely bat shit crazy fast. The amount of planning and things that have to go right is astronomical

Wonder how many attempts they did where they either got held up by some other thing, mechanical, or got tickets and went to jail.

EDIT, and the other side of the equation. The had to wait for the Statue of Limitations to run out before they could announce the record.

So the record could already have been broken by someone else again, they just have to keep their mouths shut about it.

Avoiding a flat tire for that long with sustained high speeds, aggressive driving, and probably plenty of shoulder passes is enough of a mind fuck.

Any more specifics? There’s typically some questions of legitimacy over which start and end they use, versus the original Canonballers.

I haz no ju ju

I just tested in Chrome and it works fine (same browser you're using). Something is blocking it.
OP

Bru said:
Any more specifics? There’s typically some questions of legitimacy over which start and end they use, versus the original Canonballers.
Click to expand...

The Cannonball Record has been broken again.

After leaving the Red Ball garage on the east side of Manhattan at 12:57 a.m. on November 10, it took Toman, Tabutt and Chadwick 27 hours and 25 minutes to reach the Portofino Hotel in Redondo Beach, in L.A.'s South Bay. In a car. If number crunching isn't your thing, allow me to break that down for you. Taking the northern route—I-80 through Nebraska, I-76 down to Denver, I-70 to the middle of Utah and I-15 down into L.A.'s spiderweb of interstates for a total of 2825 miles—Toman and Tabutt were able to maintain an overall average speed of 103 mph. That's including stops for fuel, which they managed to keep down to a blindingly fast 22 and a half minutes total. And that's in a country where the speed limit on interstate highways is usually 70 mph, and never higher than 80 on the roads they were traveling.
Click to expand...

How the hell do they do this without getting arrested

Hilarious, dude in the back seat with binoculars...

Damn, these guys are good

But there was also a built-in Net Radar radar detector, a windshield-mount Escort Max 360 radar detector, an AL Priority laser jammer system and an aircraft collision avoidance system—a bit of gear usually used in airplanes to help them avoid hitting other airplanes. In this case, the technology was meant to help the trio find highway patrol aircraft. The car was equipped with brake light and taillight kill switches, and Toman had all of its flashy carbon fiber trim covered with silver vinyl, which he also used to change the appearance of the taillights. At first glance, the AMG looked more like a mid-2000s Honda Accord from the rear, not like a car that would be cruising at 160 mph or faster.

For navigation and further police detection, they ran Waze—a popular traffic-avoiding and hazard-detecting app—on an iPad and an iPhone. For the GPS data they would later need to prove that they'd actually finished in the time they said they did, they ran two dash-mount Garmin GPS units and one of those GPS tags tracked by a third party. They also had a police scanner and a CB radio, each of which had a big whip antenna mounted at the back of the car.

"Probably the most trick thing I had was a thermal scope on a roof-mounted gimbal that could be operated via remote control by the back seat passenger," Toman said, explaining that although it was great for seeing deer, they removed the large black device from the car during daylight hours to avoid attracting attention. "We picked up a cop warning on Waze and we were able to see the heat signature of the car sitting on the side of the road."
Click to expand... 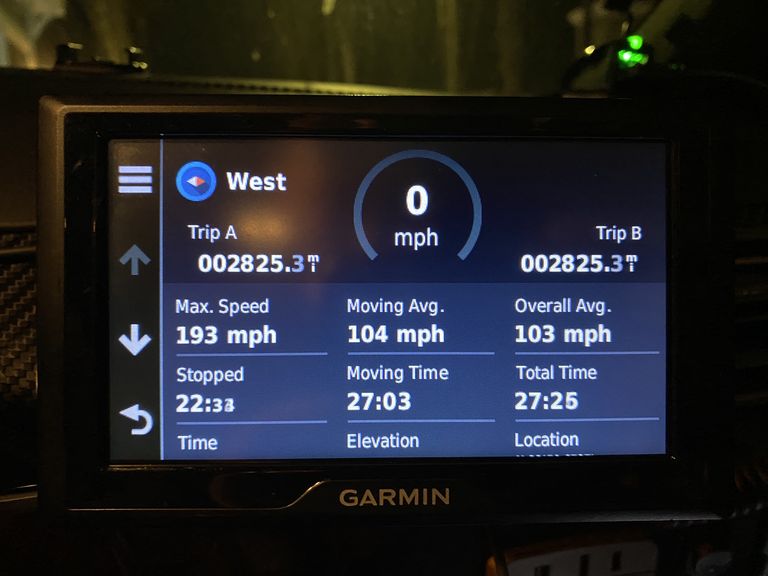 I also like how they covered up the carbon fiber and part of the taillights with silver to avoid attention, yet left the big red and black sticker on the back doors

The exact start and end as the Cannonball Baker. Awesome.

Giant fuel cell in the trunk.

The amount of tech they had plus 20+ spotters, people to help with fuel stops, Jesus.

Check out Arnesantics on IG for his builds, prep, testing, and so on. Many of his stuff in his stories.

Built by a member on here. Well, a carryover from the ChiSVT days.

Time for in-drive refueling to knock more time off it?