Another bridge gets a smackdown - Alabama man takes on Massachusetts 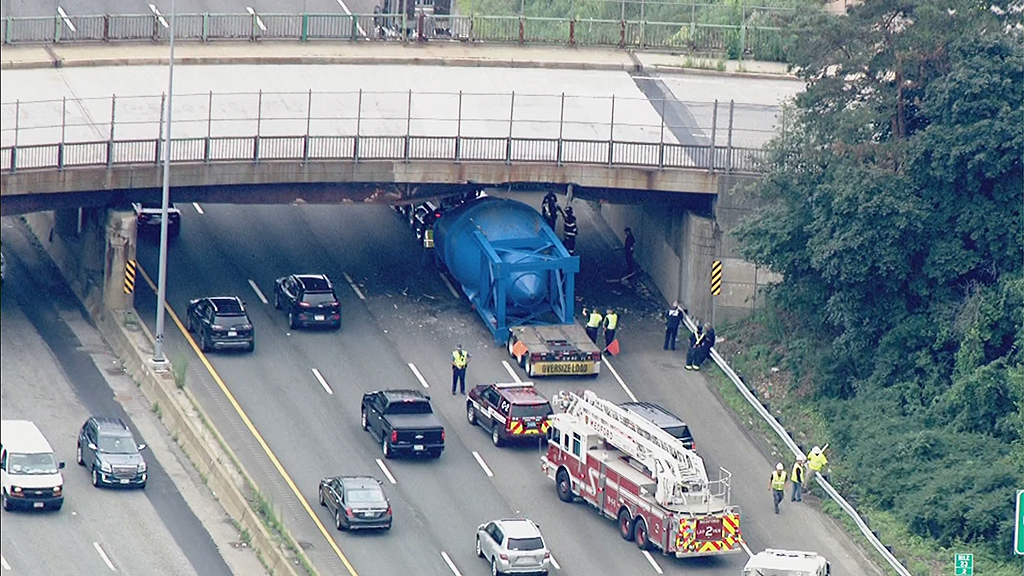 MEDFORD (CBS) – Drivers are being told to avoid Interstate 93 in Medford if possible as repairs continued Tuesday on an extensively damaged bridge. MassDOT said traffic delays and lane closures could last several months until permanent repairs are finished.

A truck carrying a large metal structure hit an overpass on 93 South around 3:20 p.m. Monday, damaging the bridge at Roosevelt Circle and causing a traffic mess for the afternoon rush hour. It happened near Exit 24 where Route 28 crosses over the highway.

Crews worked through the night on repairs, but only two lanes of traffic are getting by on that side of the highway Tuesday. Drivers are also restricted from going over the eastbound bridge.

MassDOT said there will be lane closures all day while a damaged beam and a section of the bridge deck are demolished. The immediate repair work might extend into Wednesday’s commute.

MassDOT said drivers should expect delays on Route 1 south, Route 16, Route 28 and through Roosevelt Circle for the next several months because the bridge won’t be fully reopened for awhile until permanent repairs can be made.

“It will at least be months, it’s a pretty, this is a complex structure. As you know we don’t have a lot of bridges on a curve like that one so it’s going to take some time to put repairs into place,” Gulliver said.

The agency has put up message boards on I-93 as far away as the New Hampshire border to alert drivers about the work zone.


Those who do take 93 south through Medford should expect delays, go slow and use caution.

One alternate route is to get off 93 entirely since the lane closures are at exit 24 in Medford.

If drivers see traffic getting heavy, they could get off at exit 25 in Stoneham and get back on at Medford Square, skipping exit 24.

Gulliver said they’re working as quickly as possible to stabilize the bridge. He said the primary goal is to remove all of the damaged concrete and steel, so it won’t fall on the highway, then come up with a long term repair plan.

As for what happened Monday afternoon with the truck and it’s cargo, described as possibly being an industrial tank or grain tower, Gulliver said they’re not sure yet.

“I can tell you that it had to pass under a number of other bridges that were of the same height so we’re not sure if that load loosened up at some point,” he told WBZ.

Massachusetts State Police said the truck was a 2013 Peterbilt 367 owned by Dove Transportation of Lincoln, Alabama.

“The ongoing investigation will determine if the operator or company were in violation of any state laws or federal motor carrier regulations,” State Police spokesman Dave Procopio said in a statement Tuesday. “No further information is being released at this time.”

That thing looks like the atomic bomb we dropped.

Bridges in the NE in many places have many tight clearances.

“I can tell you that it had to pass under a number of other bridges that were of the same height so we’re not sure if that load loosened up at some point,” he told WBZ.
Click to expand...

It doesn't look loose as it is still attached to the trailer and obviously did plenty of damage to the bridge. Some one needs to check their tape measures?

I’ve seen many bridges that look sketchy as far as height is concerned and even more so when there is no signage. I’ve driven my drill rig all around Chicagoland coming up to low bridges that state a height I can fit under but then I come up to the bridge and I can’t fit. I’ve also driven through bridges in one direction but can not fit going back through it the other direction even though the height signage is the same for both directions. I also make sure I when I can I will drive my truck under what appears to be the highest point of an underpass because sometimes the height will be lower towards the sides and sometimes the center supports. Gotta pay attention and slow down or stop and check. I don’t give a fuck if people have to slow down or stop behind me as I approach a bridge because I’m not going to make the nightly news by hitting a bridge.

Or like when the road dips to go underneath the bridge which clears with a height stick however when the load is suspended between a pair of Wheels forty or fifty feet apart the wheels aren't necessarily sitting in that dip....