Gav'sPurpleZ said:
bruh
i almost went and drove a new one.... the want is strong
Click to expand...

Gav, feel free to come see me. I'll get you set up with the GM and he can work the deal nicely.

I wont be here tomorrow tho.
OP

don't do it unless you wanna buy one

gonna be a lot different than your current truck.

I thought my dad's 14 was pretty nice, then got in my uncles 17 and was wowed, not these new ones are AMAZING.

I will give you a heads up A Richski

Yaj Yak said:
don't do it unless you wanna buy one

gonna be a lot different than your current truck.
Click to expand...

Meh. Delayed joke from yesterdays conversation we were having

It has some stuff that I don't love- and things I do of course. Maybe I'm having too high of "expectations/hopes" for a truck that's middle of the trim-line- but i'm not even sure the higher end trucks- denali (at4? kinda a side step, maybe up in some departments) would have these options. but just silly shit that im unsure most domestic truck manufacturers are doing- but shit i know my 8 year old entry level bmw does.

1st on that list- auto up rear windows, it's fucking HILARIOUS to me that these trucks don't have that, i dont think denali's do either, and the fords ive been in, rams ive rented, don't have it. my bmw does- how hard is it to program that or just make it fucking happen- don't tell me it's a lawyer/safety issue cuz you're full of shit. this leads me to another thing for this- there is what i like to call an OH FUCK ALL THE WINDOWS DOWN button on the dash, i can only assume this is for the worlds worst farts, or if you crash into a pond and have to escape out the windows as your truck plummets below the surface. you can see the button under the passenger side climate control knob. it's like they had space for 2 more buttons, couldn't think of what to put there, and were like ahhhhhh fuck it, get that fucking thing in there where all the windows go down (but not back up). THATS IT. THAT'S ALL THE BUTTON DOES AND IT'S LARGER THAN ALL THE OTHER BUTTONS 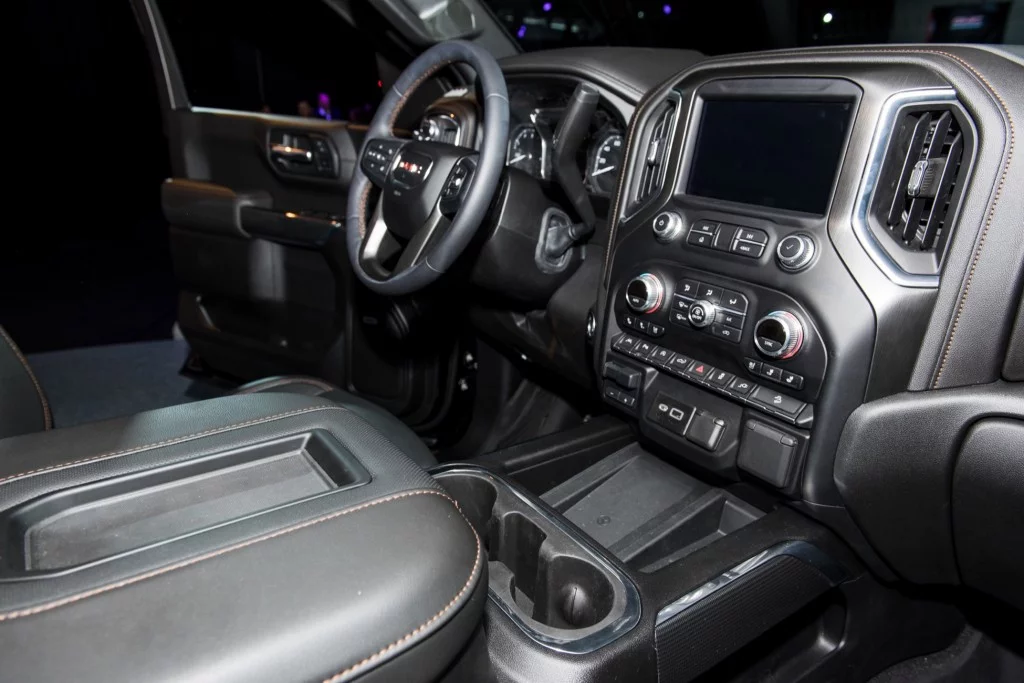 2. my wheels are polished, not chrome. nitpicky as fuck, and i should have thought of this when buying, but the SLT's have all this fucking chrome on them, and then they slap polished wheels on. my bumpers & trim shine like nobody's business, but the wheels will never show a reflection because they are polished and not chrome. why not just have it match- they make 22's in chrome, but you gotta be fucking nuts to drop 3k msrp on the UPGRADE to 22's on these trucks

... it's all probably because gm never figured out chrome wheels (late 90s gm chrome wheels, im lookin at you, you flakey pieces of shit)

3. the follow warning is dumb. why is this here, it's like you wanted to do adaptive cruise and then were like ahhhhh fuck it. NO trim lines of half ton GM pickup trucks have adaptive cruise in 2019. and while i thought the equipment/hardware may be there already @Stink Star Productions corrected my wrong thoughts there REAL quick.

4. another nitpicky thing. the grill/front bumper of this truck takes me longer to clean than the rest of the truck combined. sweet fuck, there are so many jagged edges, nooks, crannys and bullshit, it's fucking insane. that being said, cleaning it recently- i saw the sierra front bumper has the silverado front bumper "air curtain" flowage shit, just nowhere as noticeably visually. near the foglights 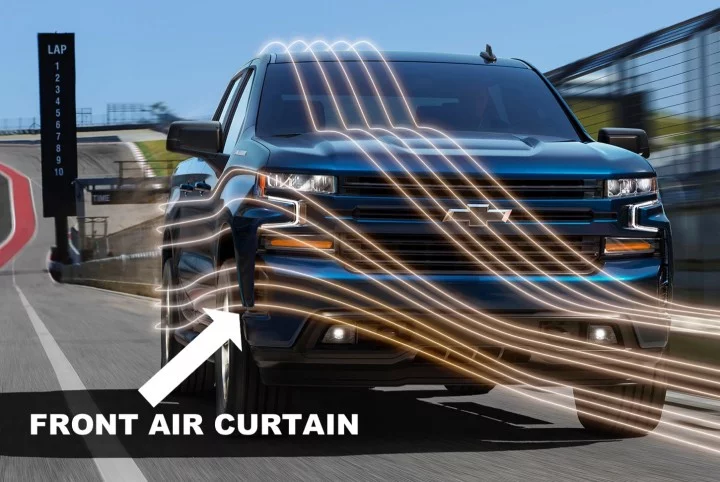 the gmc's hid it more in the foglights- but here, you can see one "keeping the truck clean" absolute fucking nightmare of a piece of truck. 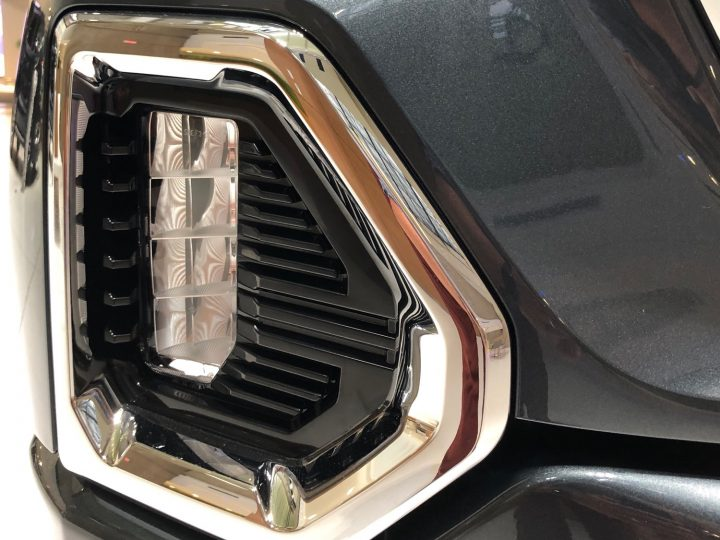 here's why it's there:

Otherwise known as front aero curtains, front air curtains are an aerodynamics technology that reduces a vehicle’s drag and increases overall aerodynamic efficiency. Designed to guide oncoming atmosphere through unique tunnels in and around the vehicle, air curtains work to not only improve fuel economy, but also to reduce noise, vibration, and harshness (NVH) inside the cabin.

5. i wish there was an easier way to access "turn the screen the fuck off" button. again, nitpicky, but i like at night having inside the cabin pretty fucking dark to see. on my bmw, hit the option button, and it's the first selection- to turn the screen off. in the gmc you have to 3-4 clicks through settings, a display menu, then somewhere else.

7. i wish the backseat folded up closer to the rear of the cab. ford has this so fucking legit on their half ton (and larger) trucks. it just works, that rear seat fold so up and the fuck out of the way, the gmc's stays canted outwards. like just have it tuck, figure it out! at least gm got the memo to make the leg room/seating room as large as if not larger than the ferds... but shit.


fords- you could do a cartwheel back here with the seat folded. 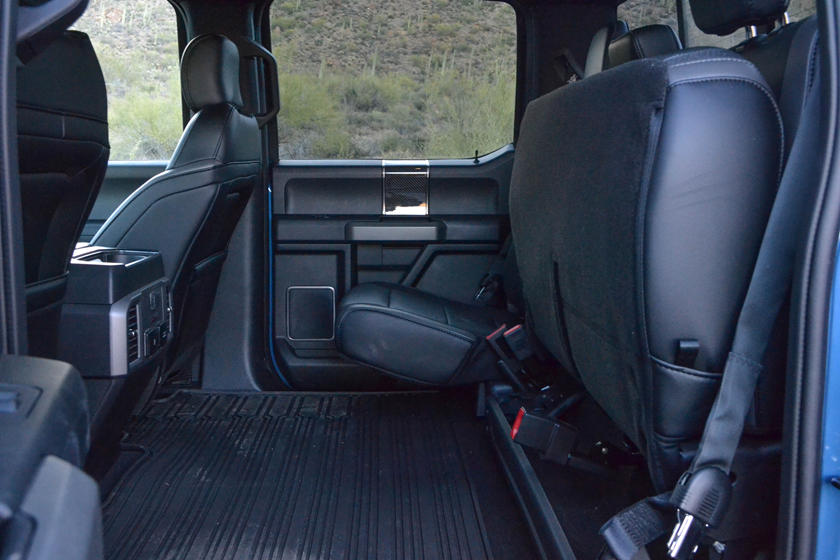 gm- i can't even find a good pic, ill take one later

alright. as for what i love in no particular order.

1. the 6.2/ten speed/3.42 gears. the truck is an absolute rocketship- there is quite a bit of torque management down low/don't rip the tires the fuck off every time programming... it's quick from a stop but once it's clicking off 4,5,6,7th gear it's moving the fuck out- this could be a seperate number but ill keep it here. the exhaust. i love how this truck sounds, it sounds fucking ANGRY. it's loud when you want it to be, and quiet enough to live with/tow with. no drone, but when you get on it it's loud as shit. that being said as well- the look from the back of the truck with the exhaust tips tucked up perfectly, i really like. 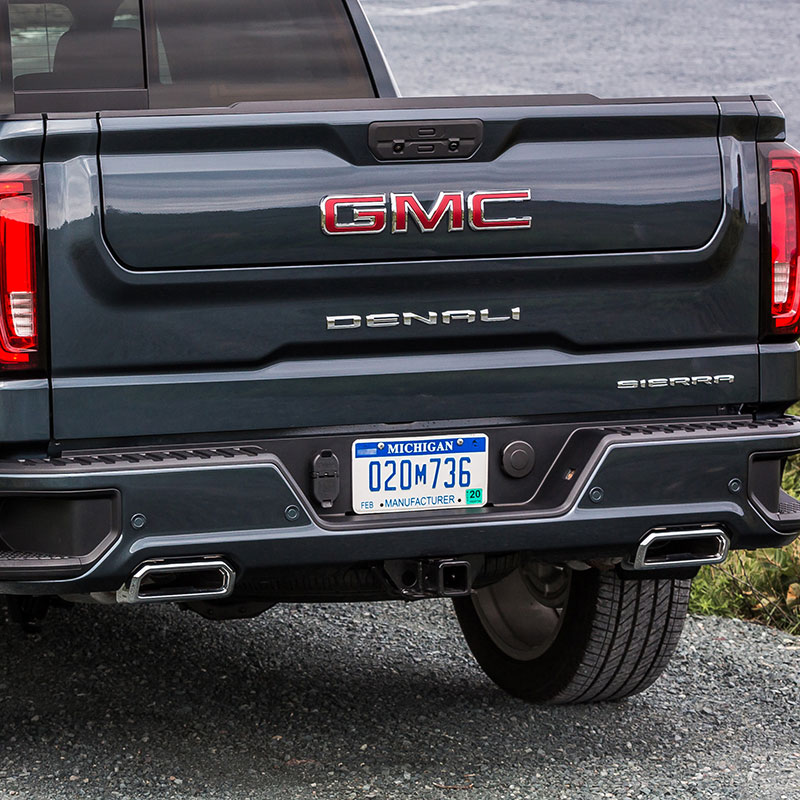 also, ill say it once, ill say it again, it had such stupid power while towing out west, through mountains, 85 mph zones, whatever, it just didn't care. it 110% felt like you could set the cruise at 100mph and the truck would mow down everything in it's path with 0 fucks given, if it could pass a gas station at this speed

2. the wireless charger positioning is perfect. the older trucks with your phone sitting on the center console i didn't love. 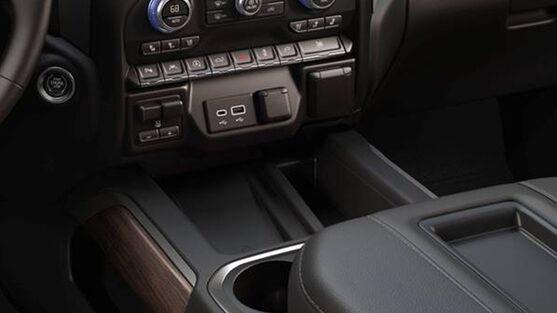 3. the backup camera is ridiculously crystal clear, HD 1990P crystale ledhdmi fucking hardcore clear. i love it. it's so clear to see fucking anything through it. past that- the dual angles, one straight down on the hitch ball, and one the "traditional" view of behind the vehicle, are awesome. and THEN, being able to access/see out the camera while moving is awesome as well- check trailer connections, see how close that asshole just got at the light you stopped at, etc.

4. the standalone apps in the infotainment system- other manufacturers do this, and likely do this very well- but i like the weather channel app with it's radar capability, built in spotify/pandora- without using my phone/android auto.

5. the bed is HYYYUUUGE. so much wider than my last truck, and so much deeper ( i think than all trucks? i think it's the deepest half ton bed there is?) i can fit my bicycle (likely two adult bikes) easy breazy, under the tonneau cover easy AF

6. the storage/cubbies/compartments inside of the truck are awesome, theres a fuck ton of it, and a fuck ton of cupholders. the in seat storage in the rear is awesome- i keep detailing rags in there.

7. the mutlipro tailgate is tits. i use the "little" fold down portion to access small shit in my bed, and then fold that portion down also while grabbing shit inside of my bed. lets me grab a good chunk further into the bed really easily.

i really think their aero tricks/the truck running in OD at anything over 40 mpg/cylinder deactivation really pays off in this truck.

thats what i can think of for now... which likely no one cares about since everyone will just #dadf150 anyways but maybe someone will find any of this helpful in the internets.

Funny you mention the rear auto windows, because it drives me nuts on my F150 too. My Lincoln MKS had auto rears, and getting my F150 without it quickly made me realize how annoying it is not to have them. Blows my mind any car/truck being made that costs more than $30k in 2019 doesn't have all auto windows.

Has to be an accounting thing (5 cents * a million of these things sold a year), but fuck!

I’d love a button that puts all windows down, but why in the center and that big

absofuckinglutely. i wonder if any domestic half tons get auto up rear windows, it's so fucking weird. the ""product specialist" walking me over the truck said it was a legal thing... i was like... dude... my 2001 bmw had them. ...
OP

ilikemtb999 said:
I’d love a button that puts all windows down, but why in the center and that big

and why not make it close them all also?

interesting. I'm pretty sure my loaner cadillac srx had auto up all. I'll look at a denali if one comes in.

GM has the auto-up rear windows on some vehicles. My STS has it and that's ~13 years old.

Not sure why not on trucks though.
OP


nor an auto up front passenger window.

At least in Ford, the rear windows don't have modules like the fronts do & therefore don't accept the auto up/down function. Fucking dumb cost-cutting to squeeze out more profit.

It's not a legal thing though. And I would think with an all new LAN architecture as these new trucks just came out with, that it couldn't be easily done. Sounds like more or less cost cutting combined with putting money in to other features.

Does yours have that trailering camera where it can more or less render the trailer invisible, so you can see what's actually behind the trailer? IF so, there's the money spent vs. auto up rear windows.