v6buicks said:
Me neither! So cool. That has to be a major upgrade from the old single cam non-crossflow. Lol
Click to expand...

SOHC flows like CRAP. Only thing nice about it is all the space you get from not having the intake in the way. I like the 2.4 design much better, DOHC, way better flowing heads, 16v, water pump is ran off of the timing belt, spring tensioner for the timing belt, better oil control, etc etc. Not to mention easier to get now days.
TS
TS

Car is on the ground now. Just need to do the radiator hose... Either going to tig/braze some metal onto the thermostat housing or not sure.... 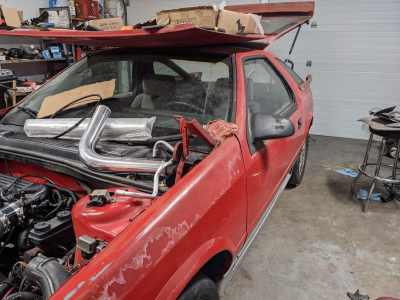 Alright, any one have any ideas for the upper rad hose? I'm trying to get away without modifying the rad or the thermostat housing if possible. 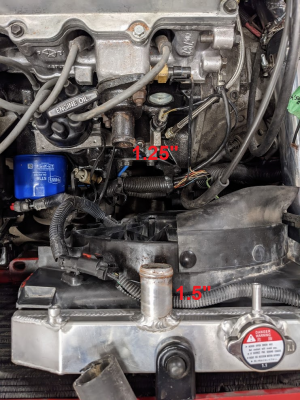 WarlockSyno said:
Alright, any one have any ideas for the upper rad hose? I'm trying to get away without modifying the rad or the thermostat housing if possible.

Steel pipe with an exducer in between? Wouldn't be the prettiest thing.

WarlockSyno said:
Alright, any one have any ideas for the upper rad hose? I'm trying to get away without modifying the rad or the thermostat housing if possible.

Rock Auto has an equivalent for about 5 bucks.
TS
TS

Mr_Roboto said:
You'll have to splice it 1-2 spots but an 1992 TBI Astro upper rad hose like this one. It bells down.GATES 21191. Rock Auto has an equivalent for about 5 bucks.
Click to expand...

What would be a good thing to use as splicer?
TS
TS 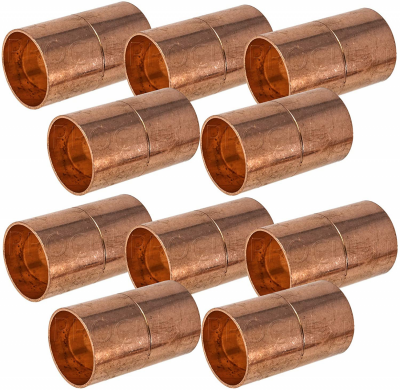 I've been running the cheapie from the 3pc set myself. You could always take a piece of 1.25" exhaust pipe, throw a bead on it (even MIG some on) so it doesn't blow off then use that.

I have a similar version of that eBay adapter in my heater circuit. It works just fine but I would hate to have it so visible like a turbo dodge upper rad hose. Lol

get some exhaust tubing with a 1.5->1.25 adapter, add a few scraps of rad hose or some silicone couplers and call it done then.

v6buicks said:
I have a similar version of that eBay adapter in my heater circuit. It works just fine but I would hate to have it so visible like a turbo dodge upper rad hose. Lol
Click to expand...

I did it in the upper hose on my Astro. I was also accepting of the idea I needed a complete coolant loop more than a pretty hose that would fit and had no realistic expectation of finding a hose that would just work in my oddball situation.
TS
TS

Well, I finally got a stock rad hose to fit. Was a pain and hope it holds.

Did have a different issue. If you watch my videos you'll know I'm sceptical as hell about the freeze plugs I put in the block. Well I drove the car around the block for a test and got some fresh 91 V-Power from Shell since I've had 87 in the tank for 4 years. Well, driving to the gas station the trans is slipping in gear, so I got to look into that. But the worst thing is the car started to over heat, so I drove it back home. Opened the hood and touched the radiator, ice cold. Touch the hose, not even luke warm. The head was BLAZING hot though. Figured the thermostat was stuck or something so I smacked the thermostat housing, eventually the hose started to warm up and so did the rad, but just barely warm on the rad.

So I took the cap off the rad, no water. Looked behind the motor, just because and saw liquid on some stuff in the back.

Poured water into the radiator and watched as all of the water just rolled out the back of the block. Freeze plug was gone.

So now I have to do all those too lol.

You said they seemed loose? Any chances you got a set that were out of tolerance? Any chance you've got an OEM one around somewhere that could be popped out and have a set of calipers taken to it? It may be something where some parts store bits aren't a good idea and you need to hit the dealership.
TS
TS

Been a hot minute, but I finally got time to pull the motor out (Only takes about an hour even if you're messing around) to put new freeze plugs in. Going to fix a few things while it's out too. Oil feed to the turbo is leaking, needs the freeze plugs knocked in, and some other small things. 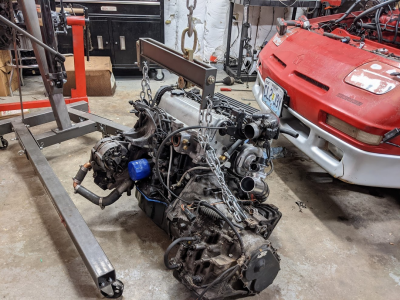 Nice. This thing is cool even when its in pieces
TS
TS

Engine is now back in. 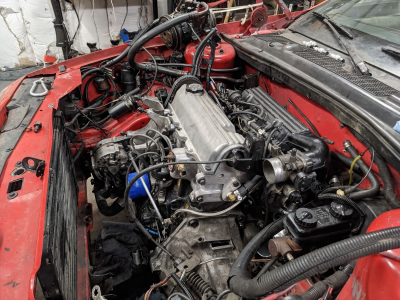 Lets see if these plugs hold. I'll get everything back together today and tomorrow.
TS
TS

Everything is back in and ready to run. Just need to pressure test it now. 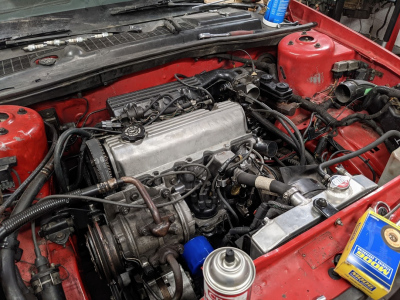 Zapped all the brake dust and popping chrome off the extra set of 17s I had laying around, I did wear a respirator and other gear, 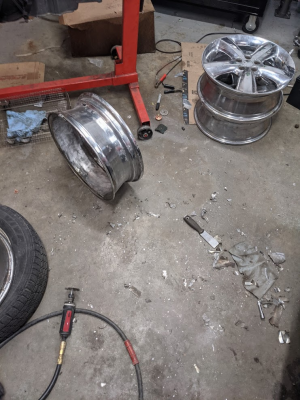 Before and after of the wire wheel 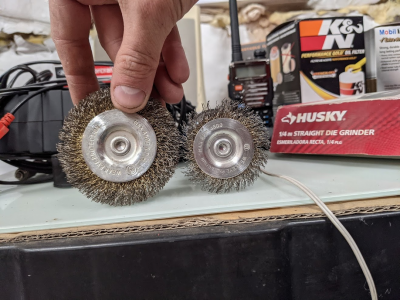 Added another bung (Monkey Fab ones are GREAT) for the wideband 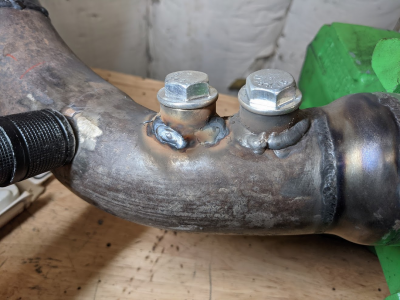 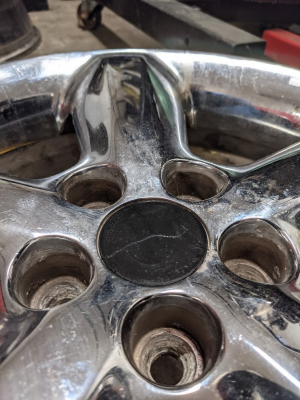 And then there's this:

Wow... Don't you love the little gifts that bad owners leave behind?

That's utterly fantastic. Looks to be about the size of a license plate and some pop rivets, should be an easy fix.

was it a map? lol